The first half of 2021 marked a historical high for startup investments in India. The total capital flow in Indian startups stood at $10.8 Bn across 614 funding deals. More importantly, both half-yearly funding and deal count were at their historical peak.

Again, this year, more than 16 Indian startups such as Paytm, Nykaa, BYJU’S and others are planning to list their businesses in the public market. This is not surprising as foodtech behemoth Zomato’s successful listing on the country’s national stock exchanges has ushered in a new phase in the lifecycle of Indian startups.

Now the front-runners, especially those from high growth sectors such as ecommerce and fintech, are opting for initial public offerings (IPOs) instead of raising private capital. On the one hand, IPOs are becoming the next milestone in the journey of late-stage Indian startups; on the other, venture capitalists (VCs) and other private investors with a stake in Indian startups are enjoying good exits and greater liquidity on their investments.

However, listing on the public market attracts greater scrutiny of a company’s financial health and demands a closer look at its sustainability. Therefore, any Indian startup planning for an IPO must optimise its operational efficiency beforehand. This will result in an overall shift in the business operations of late and growth-stage startups that are likely to IPO in the coming years.

To understand the Indian startup’s financial performance over the last three years, we at Inc42 have curated a sample set of top 100 startups (based on a combination of total funding raised and market penetration) that clocked annual revenue of more than $1 Mn in FY20.

In FY20, Indian startups clocked an aggregate revenue of $7.3 Bn+, which was 51% higher than the previous financial year. The average percentage surge in revenue was 181% compared to 186% in expenditure. 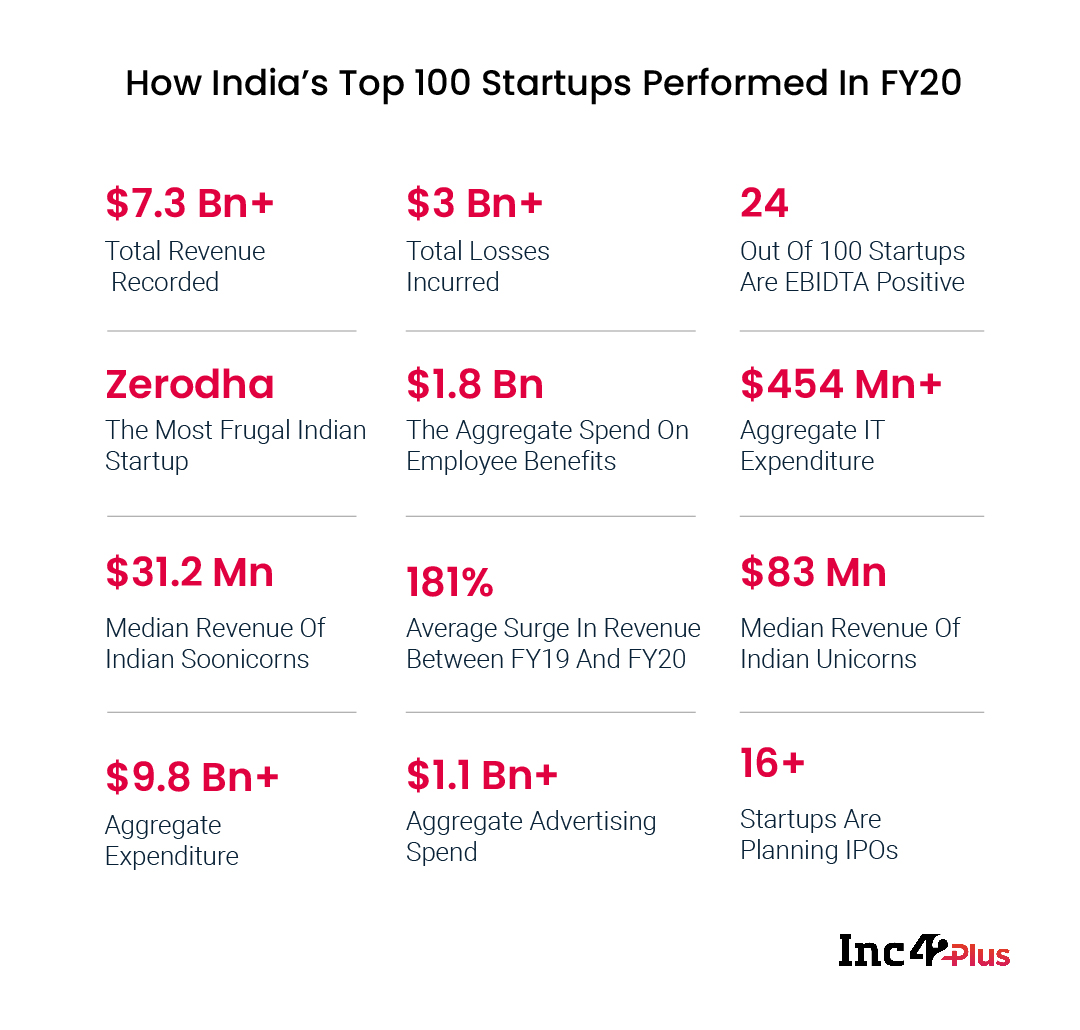 Indian startups in fintech, ecommerce and hyperlocal delivery space saw the highest surge in annual expenditure between FY19 and FY20. As the addressable markets across these sectors grew significantly due to the Covid-19 pandemic, startups operating in these segments were bullish on marketing and growth to leverage the newfound opportunity.

As the IPO trend prevails across the Indian startup ecosystem, the top companies are moving towards operational efficiency on the macro level. This can be ascertained from the fact that the year-on-year rise in expenditure between FY19 and FY20 (+34%) was nearly half of the expenditure rise recorded between FY18 and FY19 (+65%). The latest release from Inc42 Plus— Decoding The Financials Of India’s Top 100 Startups, Report 2021, provides an in-depth analysis of the top Indian startups’ financial performance over the past three years, including the index of most financially efficient Indian startups in FY20, 42 fastest growing startups in terms of compounded annual growth rate (CAGR) and an exclusive comparative analysis between Indian startups and traditional Indian companies during the pandemic.