According to EV makers, India has an estimated total of 1.5 Lakh electric two-wheelers

The likes of Ather Energy, Okinawa, Ampere Vehicle and Ultraviolette are setting the pace in the market

As in most Asian countries, India has a love for two-wheelers — motorcycles, mopeds and scooters have been a primary feature on Indian roads, and before them the humble bicycle. The sense of owning a two-wheeler has always been the initial aspiration for a lot of Indians living in small towns and villages, and a symbol of success for many.

But this aspiration is mixed with practicality. The Indian consumer wants the most economical option and that doesn’t just mean in terms of price; it extends to fuel economy as well. And even when it comes to the electric mobility segment, this has been the primary focal point. For ages, electric two-wheeler manufacturers have tried to match this among their products, but things are changing slowly as more and more manufacturers diversify the product.

Is The Hype For Electric Two-Wheeler For Real?

The conventional two-wheeler market in India is expected to grow at an annual growth rate of 7.33% and reach a sales volume of 24.89 Mn units by 2024, from 21.19 Mn in 2019. DataLabs by Inc42 also revealed that there are more than 18 Mn gasoline two-wheelers sold annually. While the conventional vehicles seem to continue to sell like hotcakes, the electric two-wheeler market in India is still in the nascent stage as there is no structured data available to correlate the exact market size estimation.

However, many experts that Inc42 spoke to, said that India is currently home to around 1.5 Lakh units, with other startups estimating anywhere between 80K to 1.2 Lakh sold over the last few years. In FY2018, electric two-wheeler sales almost doubled to 54,800 units compared to the previous financial year. As per Niti Aayog, the electric two-wheeler industry is expected to grow at an exponential rate in the coming years, taking over 80% of the market by 2030.

Today, some of the market pioneers who are leading the electric vehicle revolution in the two-wheeler segment include Ather Energy, Okinawa, Ampere Vehicles, Evolet India and Ultravolttic among others. Recently, even TVS Motors and Bajaj have joined the EV race, thereby giving a boost to the entire segment.

Today, most electric two-wheelers that you see on the roads do not require a license to buy or ride them (lesser than 25kmph). The options are plenty and the vehicle price also ranges from anywhere between INR 35K and 85K, which is surprisingly lesser than petrol two-wheelers.

Joginder Singh, the owner of an Ampere showroom in Delhi-NCR told us the outlet had sold close to about 1000 electric vehicles since 2017. “There has been an increase in the demand each passing day as people are seeing the value of electric vehicles,” he added.

Interestingly, the Ampere Zeal, which is the most expensive model, cost about INR 85K, and after subsidy, it comes up to 67K, which is almost the same price as Honda Activa. As per the Faster Adoption and Manufacturing of (Hybrid &) Electric Vehicles in India (FAME), the government had planned to provide financial support of INR 600 Cr for two-wheelers (with a maximum speed greater than 25 km per hour) through incentives.

The electric mobility subsidiary of Greaves Cotton, Coimbatore-based Ampere Vehicle was founded by Hemalatha Annamalai in 2008. The company is backed by marquee investors such as Ratan Tata, the chairman emeritus of the Tata Group and Senapathy “Kris” Gopalakrishnan, former Infosys VP and chairman of Axilor Ventures.

Another prominent player in the electric two-wheeler segment, Hero MotoCorp-backed Ather Energy, a Bengaluru-based maker of electric scooters said that it has been integrating intelligence and connected features in a high-performance electric scooter. Recently, the company launched its flagship product 450X, which offers the quickest acceleration in the 125cc category (ICE +EVs). Ather Energy declined to reveal sales figures, but claimed that it has the largest market share compared to the rest of the players in the market. We could not independently verify this claim. 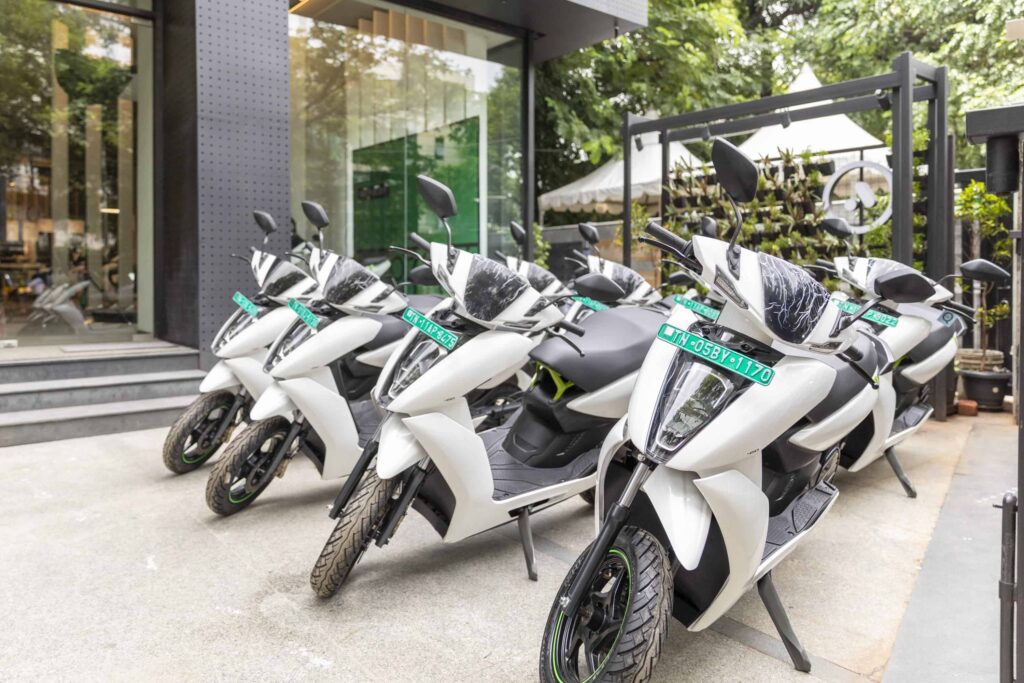 Ather Energy told Inc42 that it has signed a memorandum of understanding (MoU) with the Tamil Nadu government to build a new 400K sq ft facility and are moving to the next phase of its growth to cater to 10 markets in India. The facility will be able to produce 100K electric scooters and nearly 1.2 Mn battery packs.

“We want to sell a million electric two-wheelers in the next five years and 150K — 200K units within the next three years,” said Ravneet Phokela, the chief business officer at Ather Energy.

Jeetender Sharma, MD and founder of Okinawa, said that his company offers affordable vehicles compared to the product of the IC engine. Further, he said that the maintenance cost is also very low, so the focus is on after-sales service. “That’s the reason we have sold more than 60,000 units of electric scooters till date,” he added.

Founded in 2015, Gurugram-based Okinawa was started by Sharma and Rupali Sharma, the company manufactures affordable electric scooters. Its manufacturing facility is located in Bhiwadi, Rajasthan. The company believes in bringing pioneering technology and cutting edge designs for Indian consumers. Okinawa told Inc42 that it is planning to expand its dealership network PAN India. Currently, it has over 350+ dealerships. In the coming days, it plans to increase this by 600+, along with targeting the sale of over 75,000 vehicles in the new fiscal 2020-2021. 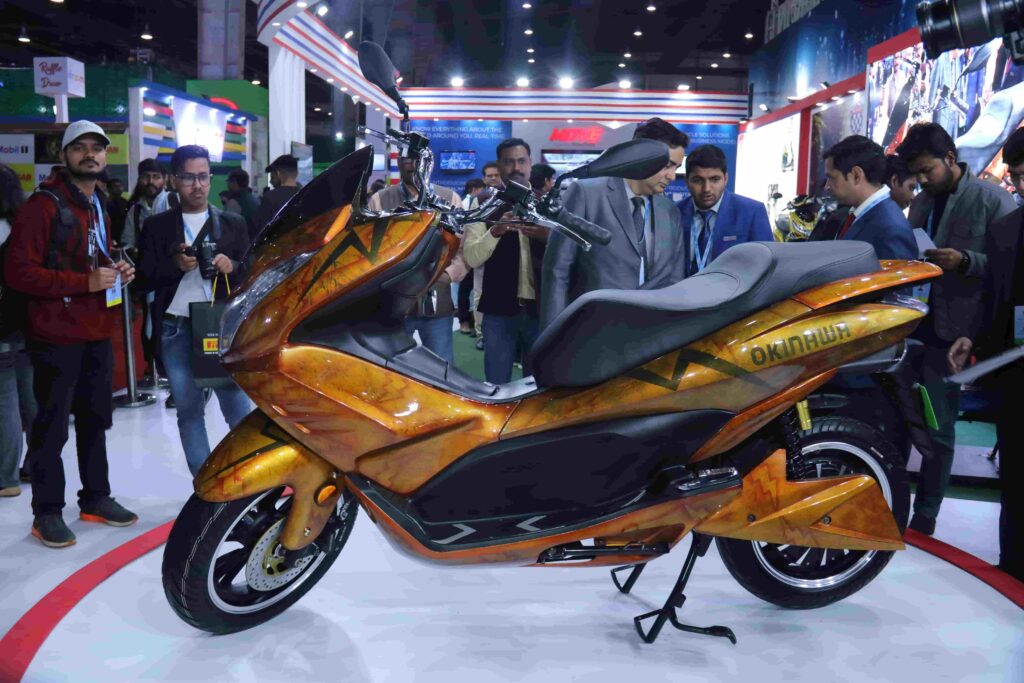 Started by defence veterans, Gurugram-based Evolet India which was launched in 2019, also offers two-wheeler vehicles, both in premium and affordable categories. Interestingly, the founders have over two decades of experience serving the armoured corp and army with electric scooters and motorcycles for the armed forces, cantonment, and air bases.

Speaking to Inc42, Sq. Ldr. Prerana Chaturvedi, the CEO of Evolet (Rissala Electric Motors) said that since inception, they have positioned and tested more than 2K vehicles in various models of two-wheelers and four-wheelers in extreme weather conditions, from hot deserts to heights and chills. “Today, we can proudly say that we have built a range of electric vehicles that is made for India,” she added.

In a short span of time, Evolet has secured around 20 dealerships within six months of its brand launch. Prerana said that by 2020 it will have 100 dealerships across the country with target sales of around 150 units per month per dealer, i.e almost close to 15K units.

The company has manufacturing facilities in Haryana, Hyderabad and Chennai, where it produces its 13 products across segments. Its Haryana facilities have a built-up area of 1.4 Lakh sq ft with a manufacturing capacity of 3.5 lakh two-wheelers per annum. The Hyderabad and Chennai facility, on the other hand, is fully-equipped to produce 1500 buses per annum and is spread in an area of over 2 Lakh sq. ft. 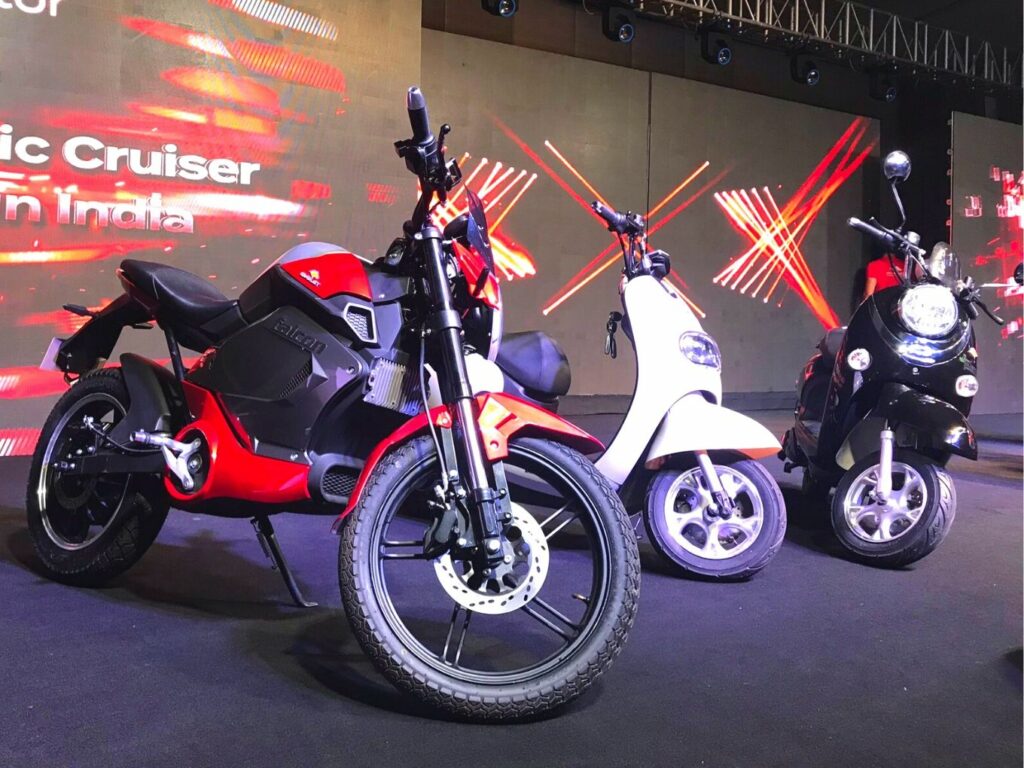 “Vehicles today must adapt to you and not the other way around,” said Narayan Subramaniam, founder and CEO of Ultraviolette Automotive.

Elaborating on the same, Subramaniam said that customers today should look at development in technology across domains. He firmly believes that the automotive industry must be inspired by the consumer electronics space and innovate at the same pace. For electric vehicles to become mainstream in the near future, two fundamental aspects need to be addressed — electric vehicles have to be desirable and range anxiety, the Ultraviolette cofounder added.

Bengaluru-based Ultraviolette is addressing these issues by building an ecosystem to cover the emerging needs of sustainable transportation, both on the product as well as on the energy side. In November 2019, the company unveiled its high-performance electric motorcycle the F77, and it has received an overwhelming response from the market, Narayan claimed.

Ultraviolette is expected to deliver its first batch of motorcycles by October 2020. “There are a few other companies working on electric vehicles, but we are highly differentiated by technology, capabilities of our R&D team and have multiple vehicle platforms ready for production,” he added. 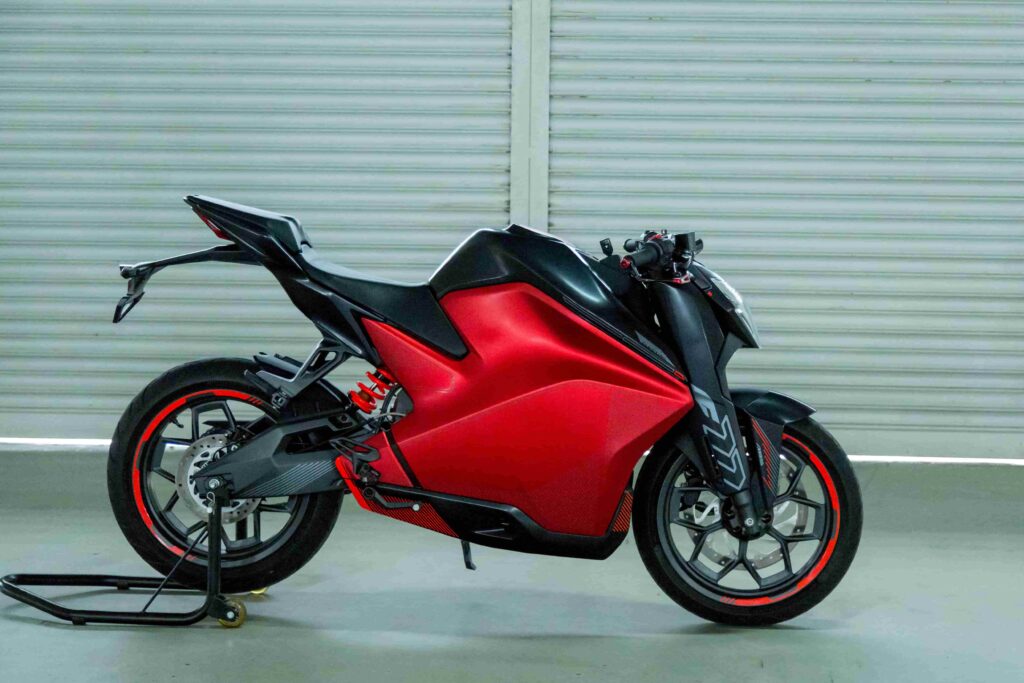 Is The Future Of The Two-Wheeler Market Electric?

To flesh out the EV ecosystem, Ather said that it has started a corporate programme called ‘Together Electric,’ where it plans to build a network of organisations to accelerate the adoption of electric vehicles in the country. Phokela said that the growing research and development activities are likely to result in a wider product portfolio for electric two-wheelers, thereby positively influencing the country’s electric two-wheeler market.

Today, we are moving towards a cleaner and sustainable future, and it becomes imperative to reduce the dependence on fossil fuels. Looking at the way the electric two-wheeler industry is heading, the technology is more advanced and many companies and startups are offering significantly higher than existing IC engine powered vehicles.

Most importantly, increased efficiency, battery performance, lower maintenance costs, preventive maintenance, smart and connected features are some of the immediate advancements that we see with electric vehicles. And EV two-wheeler makers believe an important aspect is to educate customers, and spreading awareness and breaking myths associated with EV performance so that demand kicks off the chain reaction that catalyses the EV industry.