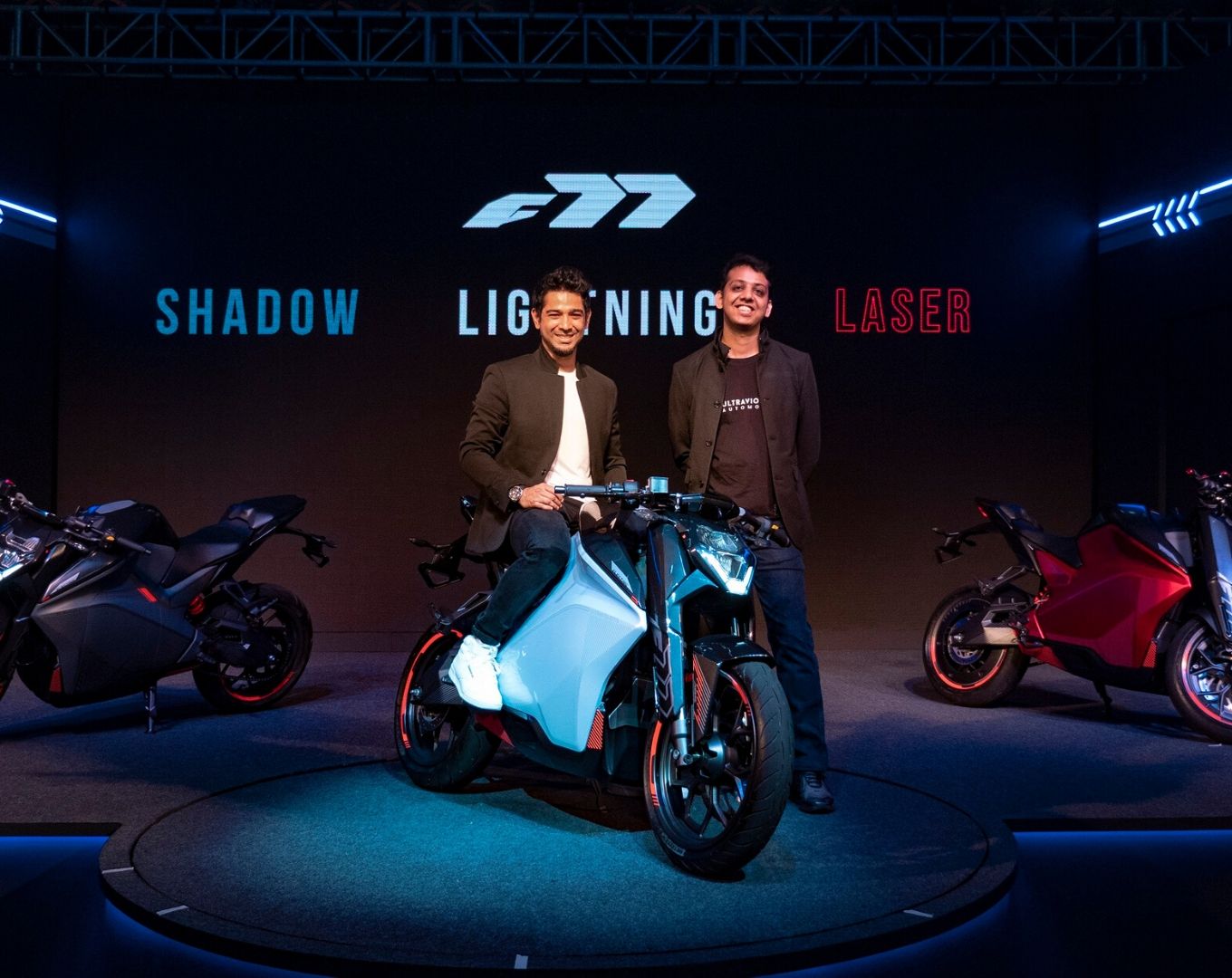 The EV industry in India has been associated with low performance and zero desirability, say Ultraviolette founders

The story of electric mobility in India so far has been a story of two-wheelers, but even within this growing segment, the market offers a selection of efficient scooters and electric bikes which are not really geared for performance, but primarily for practicality.

The belief is that early adopters of electric two-wheelers will be hard-wired to focus on achieving maximum mileage at the best price. But as seen in the motorbikes market, high-performance models have become a focal point for urban millennials and Generation Z adopters.

Moving beyond the ‘kitna deti hai’ mindset, a clutch of EV makers in India is focussing on high-performance motorcycles with electric transmissions.

“One of the major concerns that Ultraviolette is addressing is the fact that the entire electric vehicle industry in India has always been associated with low performance and a zero desirability quotient,” said Narayan Subramaniam, cofounder of Ultraviolette Automotive.

Creator of the F77, which is claimed to be India’s first high-performance electric motorcycle, Ultraviolette Automotive was founded in 2015 by Narayan Subramaniam and Niraj Rajmohan. The company envisions to create top-of-the-line electric mobility solutions, driven by progressive design.

The F77 is centred around high-speed performance rather than mileage efficiency, thanks to advanced engineering simulations and multi-level safety systems and features such as remote diagnostics, over-the-air (OTA) efficiency upgrades, regenerative braking to conserve power, multiple ride modes, besides the more commonplace features such as bike tracking and ride diagnostics. 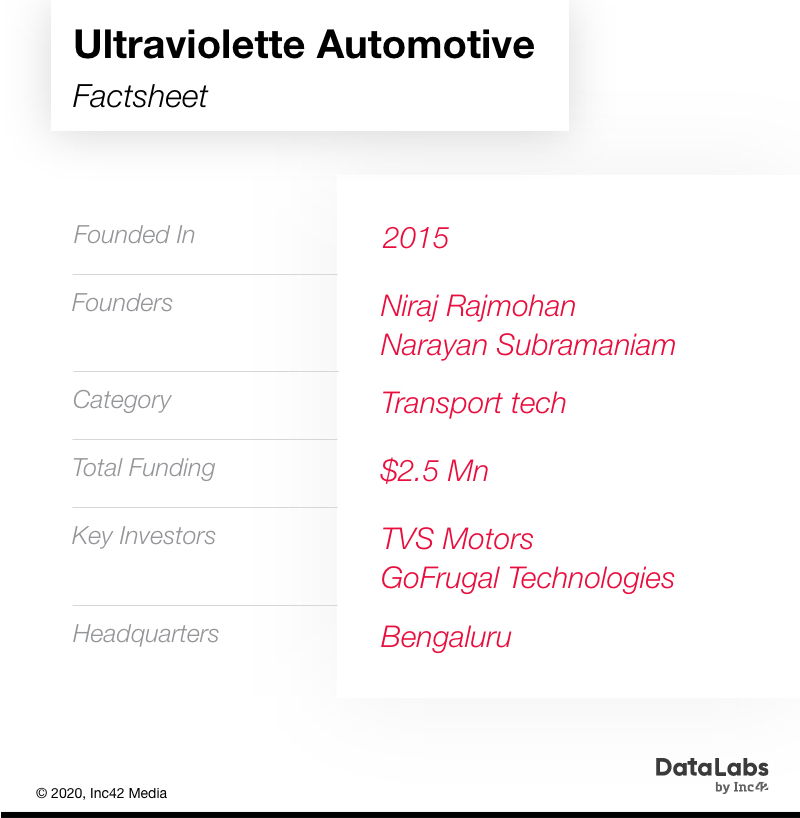 Narayan believes that as newer models of mobility evolve across the world, coupled with a worldwide initiative to reduce carbon footprint and maximise ease of living make for a compelling case for electric vehicles to be the future of mobility.

“We realised very early on that a good product alone will not accelerate the transition towards electric mobility. There needs to be reliability and predictability built around the availability and usage of energy. We have spent considerable time and built a lot of IP around the development of batteries and various forms of charging technology that will soon become a crucial part of the electric ecosystem.”

Shortlisted as one of the startups to watch out for in Inc42‘s EV Startup Watchlist 2020, Ultraviolette sets its eyes on the two-wheeler market as the product development timeline was shorter and ranged between two-and-a-half to three years. The company filed several patents in battery technology, especially on the safety and thermal management aspects. Given the crowded two-wheeler market, it had to find a competitive edge and this is where the focus on performance and speed.

The F77 predominantly targets youth in urban areas and while high-performance petrol bikes have made their way to Tier 2 and Tier 3 cities, an electric bike comes with its set of challenges such as the infrastructure. To target all segments, Ultraviolette will be launching more products in the electric motorcycle space, but for now, the focus is on high-performance bikes.

“Today, we are living in times where all forms of vehicles come with a certain pride of ownership. Right from the first bicycle, you want as a child, the motorcycle you want to ride in college, to the car you aspire to own later in life,” said the cofounder. Narayan claims the focus is on delivering consistent user experience across the usage and ownership experience cycles. Could that be Ultraviolette’s competitive edge?

While manufacturers and industry players have experimented significantly in the electric scooter segment, less progress has been made in the electric motorbike market. This is evident from the handful of models available in this segment in India. However, many companies are showing keen interest in this space with the likes of Hero Electric with its AE-47 and Okinawa Autotech having plans to launch their electric motorbikes soon.

New products in niche markets often face novel challenges. While the electric mobility market in India has been plagued by notions of non-desirability, low performance, non-reliability, and weak battery life among others, finding the right battery technology for Indian conditions and for the performance requirements was one of the biggest challenges for Ultraviolette. “There are no batteries available globally that could meet the demands of a high-performance electric vehicle and sustain the rigours of climatic variances and usage across India. We essentially had to develop our own battery packs, ground up,” he said.

Addressing the two fundamental aspects of desirability and range anxiety, Subramaniam said, “Vehicles today must adapt to you and not the other way round. And to achieve this, we must look at development in technology across domains. We believe the automotive industry must be inspired by and innovate at a pace that is associated with the consumer electronics space.”

Narayan said range anxiety can be tackled in two ways. First, by providing a significant range, sufficient to cover the heaviest usage scenarios. Second, by building a network of energy stations that would provide access to energy on-the-go. “Overcoming range anxiety will be key to the success of the EV market in India.”

The company believes that while on the supply side, progress is driven by technology maturity, commercial availability of components, lower manufacturing costs, technical and skill availability and improved investment flow, the demand side is being fuelled by rising consumer expectations.

“People are waiting for a no-compromise EV solution to switch over.”