Today, lithium-ion (Li-ion) batteries have the highest adoption in the global electric vehicles market, but in India lead-acid batteries still rule the market.

As per JMK Research, the Li-ion battery market in India is expected to increase from 2.9 GWh in 2018 to about 132 GWh by 2030, growing at a compound annual growth rate (CAGR) of 35.5%. Many industry experts believe that this is farfetched, as India is yet to witness MWh level of growth in the battery manufacturing capacity due to the paucity of local manufacturer and the low current capacity. However, all this could change in the next five years as the market matures.

Many of the battery manufacturers and EV makers that Inc42 spoke to said that they have started working on developing li-ion battery technologies indigenously for electric vehicles. In addition to startups such as Log 9 Materials, RACEnergy, Cell Propulsion and ION Energy, the likes of ISRO, BHEL, Amara Raja Batteries and Naval Science & Technological Laboratory (NSTL). Among the big-name players in the market are Okaya, Coslight, Exide, Hero Electric, Suzuki, Exicom, Samsung, Tata Chemicals, Denso, Panasonic and others. Clearly, the competition in the EV battery market is immense!

While most of these players are setting up their base in India or have announced manufacturing and assembly lines for li-ion batteries, the scale at which the production is expected to take place for the electric vehicle market is still not enough capacity. Additionally, the adoption of electric vehicles in India hasn’t left any impact on the industry yet due to challenges such as the high-cost of vehicles (for two and four-wheelers), lack of charging infrastructure, range anxiety, charge anxiety and others. 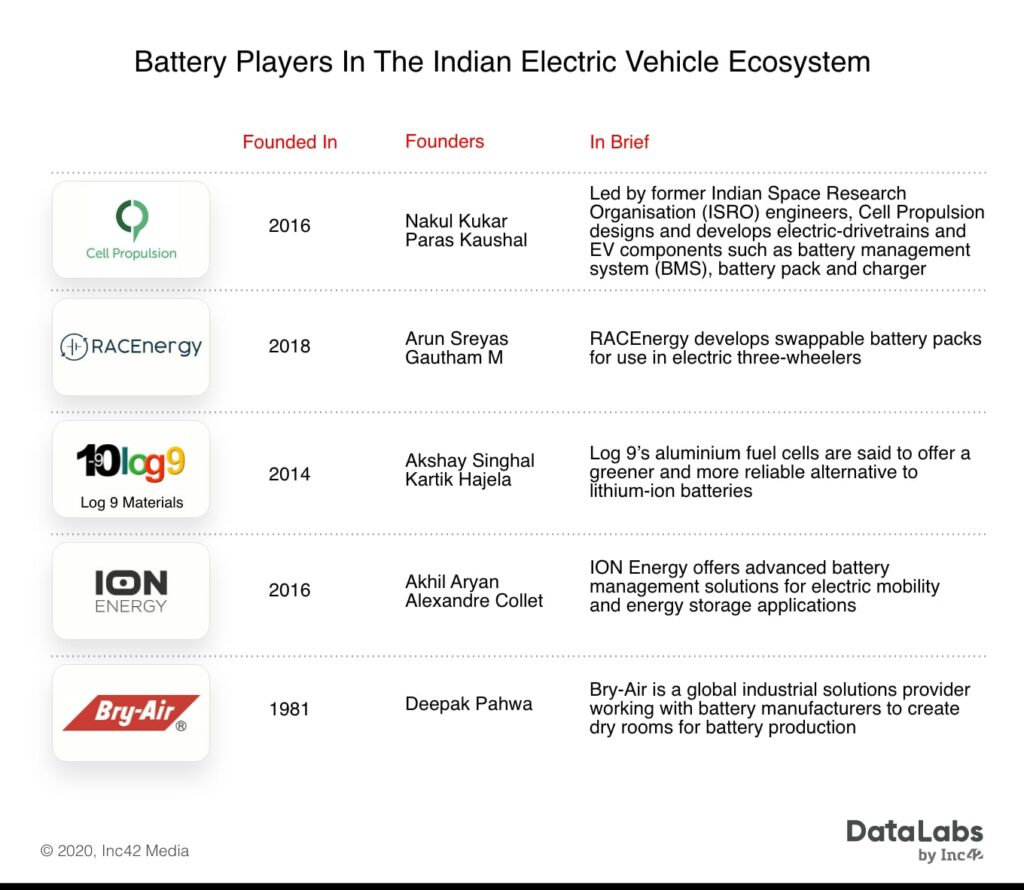 According to a global study, a decrease of battery cost is anticipated by 2025, which will determine a significant decrease in the acquisition price of the electric vehicles, helping them reach closer to the price of petrol or diesel vehicles. Another study also revealed that the cost of Li-ion batteries decreased by over 50% from 2007 until 2014, globally, so the process is already underway.

In India, the cost of the battery has dropped significantly —  in 2010, it was about $1000 per kWh, while this fell to over $200 per kWh by 2018, an 80% drop. With the prices of batteries coming down, electric mobility and battery storage will be the next big opportunity for entrepreneurs and investors in the country.

“India has missed the bus on li-ion cell manufacturing. It has become a chicken and egg problem,” according to Akshay Singhal, founder at Log9 Materials, which makes aluminium fuel cells. Backed by Sequoia India and Exfinity Venture Partners, the company has over 16 patents around graphene-based battery technology.

To compete with global prices and efficiencies, startups need to setup at least a GWh per annum of production capacity commonly known as a gigafactory. This needs an investment upwards of $500 Mn (INR 3500 Cr), Singhal told Inc42.

EV Battery Battle: Lead Acid Vs Lithium-Ion Vs Others

On the other hand, he also said that the demand is not yet adequate for one type of li-ion to be manufactured in India. The minimum capacity requirement to keep EVs competitive will continue to increase as per experts, similar to road capacity requirement growing with more ICE vehicles on board. Moreover, even if we manufacture the cells here in India — the foreign exchange loss for procuring raw materials (lithium, cobalt and others) would be significant and the dependency would be on China primarily,” the Log9 founder added.

The Li-ion battery market is at a very nascent stage, with lithium iron phosphate (LiFePo) and lithium manganese cobalt oxide (NMC) chemistries being the most common configuration, Sreyas told us.

Hyderabad-based RACEnergy develops swappable battery packs for use in electric three-wheelers. The company builds the battery packs from the ground up and develops the electronics inside the pack, enclosures, and connectors in-house.

For those unaware, a battery pack primarily consists of three components — anode, cathode and electrolyte. Depending upon the application or use-cases, the chemical composition and materials used change. The applications range from storage to electric mobility, to electronic gadgets and devices among others.

For instance, in the case of li-ion battery, the cathode consists of a metal oxide (LiMO2) and anode is made up of porous carbon (graphite), along with lithium electrolyte. Most battery manufacturers and researchers are developing technology around this by changing the electrolyte, be it graphene, silicone, hydrogen fuel cell, to ensure longer battery life cycle and improve the efficiency of the battery.

At present, India imports li-ion cells from China, Taiwan and South Korea, about 1 GWh, which is equivalent to 0.3% of global capacity. According to a CleanTechnica report, India imported $1.23 Bn worth of Li-ion batteries between 2018 and 2019, not for electric vehicles per se, but for other applications such as storage, power generators etc. The Indian government concerned about the imports has proposed the setting up of Gigafactories in the country.

The report further stated that India will need a minimum of 10 GWh of cells by 2022 and 50 GWh by 2025, China, on the other hand, is expected to have over 600 GWh of annual battery production capacity by 2023. The requirement will only rise for India in the coming days as the demand and adoption of the electric vehicle market set to increase.

Recently, over 14K tonnes of lithium reserves were discovered near Bengaluru by the researchers of the Atomic Minerals Directorate, a unit of India’s Atomic Energy Commission at Mandya. This means that India could have more untapped reserves at the moment. The Indian government needs to explore the possibility of more such reserves, which could boost battery manufacturing by a huge factor.

“While people are talking about oil security across the world, the lithium-ion cell manufacturers in India are also concerned about the raw material security for cell manufacturing,” said Deepak Pahwa, Chairman of Pahwa Group & MD of Bry-Air (Asia).

Unlike batteries that are used for storage purposes, batteries used in electric vehicles undergo a different set of challenges. In electric vehicles, the battery undergoes a sudden surge in power every time the driver accelerates or applies the brakes.

For instance, max charge gets drained when you accelerate. The technology varies according to application, battery composition to packaging. In other words, the choice of cathode and anode also changes. Therefore, this needs to be taken into consideration when designing or manufacturing the battery cell, explained Pahwa, a veteran in the battery manufacturing and dehumidification space.

“Most importantly, the dry room facility or the infrastructure where these cells are manufacturing also plays a pivotal role in developing cutting-edge, quality Li-ion batteries. A small amount of moisture in the battery can ruin it completely as lithium is highly aggressive, corrosive and hygroscopic in nature,” said Pahwa.

Pahwa’s firm Bry-Air claims to offer end-to-end support in setting up of dry rooms for research and development work and production of batteries.

Nakul Kukar, CEO and founder at Cell Propulsion, also believes that there are two major challenges for the Indian battery market — setting up local production of Li-ion cells and developing processing technology for all relevant chemicals required to produce electrodes and electrolytes of li-ion cells at scale.

Bengaluru-based Cell Propulsion is working towards identifying various supply chain challenges and addressing complexities involved in sourcing relevant raw materials for large-scale manufacturing of Li-ion cells. “The relevant IP for electrode design and cell engineering is readily available with us,” mentioned Kukar, “This will be sufficient for us to set up a plant for cell production after the supply of required materials is secured.”

Adding to this, Log9’s Singhal said that lack of robust and optimised technology for cell manufacturing is a big challenge as well. “We have been able to leverage our graphene expertise to stay ahead of the curve and develop the most cutting edge technology for Aluminium fuel cells,” said Singhal optimistically.

He claimed that the energy densities provided by this technology are already at 5x of lithium-ion and have the potential to reach 15-20x.

Many experts that Inc42 spoke to, also believe that one of the setbacks of Li-ion batteries is in maintaining the operational temperature, which could affect the performance and efficiency of the battery, along with lifetime and safety in exploitation. At present, this kind of battery technology requires a single battery management system (BMS) in order to control and monitor internal cell temperature.

In addition to this, there are other problems that are hindering the progress of battery manufacturing, which includes high production costs, recycling of the batteries and the pollution associated with it, as well as recharging or swapping infrastructure for reusable batteries.

Akhil Aryan, cofounder and CEO of ION Energy told Inc42 “With batteries contributing to 40% plus cost in modern EVs and the whole anxiety around their life cycle, performance (charging time, safety, etc), calls for more than just local safety protection.”

Technically, on average, the life of a Li-ion battery is up to three years or 500-700 charge cycles, after which, they need to be replaced. Talking about this bitter reality, Aryan said that at present the expected life of the battery is largely unknown and are all based on assumptions made by most companies.

“It becomes crucial for battery and electric vehicle manufacturers to unleash the core potential of battery data and leverage it with machine learning and analytics to accurately determine, predict and exceptionally improve the battery life,” Aryan said.

Further, Mumbai-based ION Energy’s Aryan explained that his company has pioneered a disruptive battery intelligence platform called Edison Analytics, which is designed to optimise performance and extend the life of Li-ion batteries.

Then there’s the disposal issue.

According to a Bloomberg New Energy Finance (NEF) report, by 2040, the electric vehicle industry is expected to touch 57% in sales and 30% of passenger vehicle sales will be electric. Li-ion batteries are powering electric vehicles, smartphones and other devices as well as homes and large solar/wind micro-grids. That’s a lot of batteries

There exist serious concerns in terms of ground-water and heavy metal pollution thanks to Li-ion batteries and their recycling. Some experts told Inc42 that if it is not controlled or monitored properly, it could pose a huge threat to the environment as they contaminate soil and groundwater, if left untreated. This, in a way, also calls for a regulation where the government needs to consider. And startups are looking to address this issue by coming up with alternatives.

Many experts also suggested that a lot of research is happening in finding ways to cut the existing li-ion battery reliance, be it graphene, hydrogen or aluminium fuel cells among others.

Log 9 Materials says its aluminium fuel cell would be competitive to the current Li-ion batteries even in the initial deployment phases. More importantly, all the raw materials required for its production could be sourced within India, he added.

Sharing future plans, Singhal said that his company will deploy this technology for stationary power generation (as a direct alternative to diesel generators) initially, thereby ensuring uninterrupted power guarantee without any downtimes, along with providing green, reliable and quiet alternatives.

He believes that aluminium cells will be ideal for long-haul electric mobility. Currently, one of the biggest challenges with the adoption of li-ion based electric vehicles is the limitation of range which prevents the consumer from travelling intercity for long distances. “Aluminium fuel cells will be able to provide a range of more than a 1000 kilometres and up to 3000 kilometres on refuelling of the system which hardly takes five to ten minutes.”

As the electric mobility begins to charge towards a new dimension of sustainability, durability, and eco-friendly practices, it becomes crucial for battery and electric car manufacturers to look beyond the herd mentality and come up with alternative technologies such as aluminium-graphite batteries, hydrogen fuel cells, lithium-sulfur, graphene supercapacitors, redox flow batteries, bioelectrochemical batteries and others to the fuel the electric vehicle market in India.