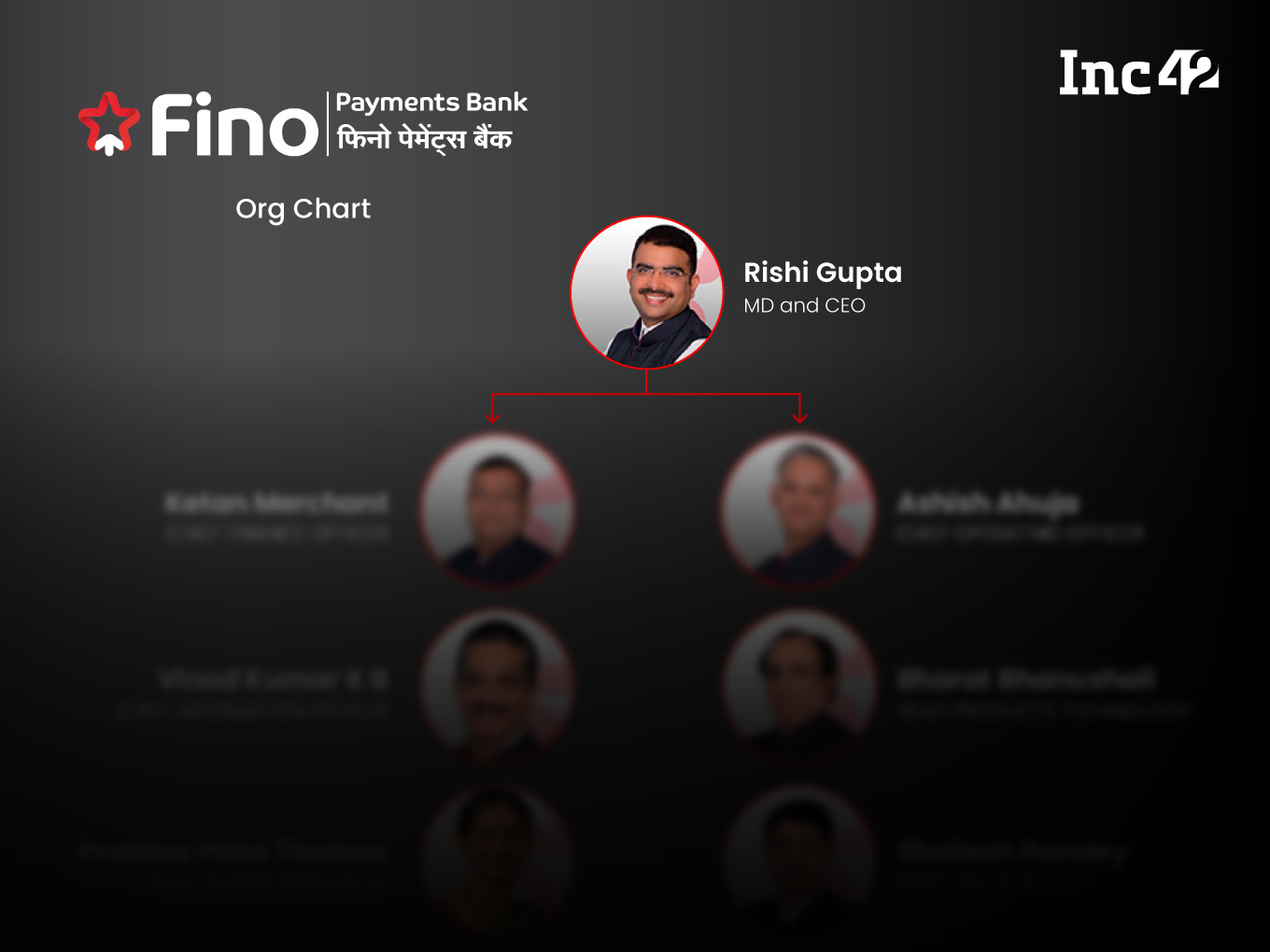 The payments bank is headed by MD and CEO Rishi Gupta, whose FY21 compensation is reported as INR 3.04 Cr

Fino Payments Bank posted a total income of INR 791 Cr, resulting in a net profit of INR 20.4 Cr in FY21

Mumbai-based Fino Payments Bank has filed its draft red herring prospectus (DRHP) with the Indian public markets regulator SEBI. The four-year-old payments bank is looking to raise INR 1,300 Cr through this IPO. As per the DRHP, the offer will include issue of fresh shares worth INR 300 Cr as well as an offer-of-sale (OFS) of upto 15,602,999 equity shares by Fino PayTech. The OFS will also include upto INR 3 Cr for subscription by eligible employees.

Backed by marquee investors such as Blackstone, ICICI Group, Bharat Petroleum and IFC, amongst others, the payments bank posted a total income of INR 791 Cr, resulting in a net profit of INR 20.4 Cr in FY21, ending March this year.

In FY21, the payments bank processed and facilitated more than 434 Mn transactions having a gross transaction value of INR 1.32 Lakh Cr. The bank said it has the largest network of micro ATMs as of March 2021, with a market share of 55% along with a network of 6.4 Lakh merchants and 25.7 Lakh accounts.

Founded in 2007 as Fino Fintech Foundation Limited, the company’s name was changed to Fino Fintech Private limited in 2015. Fino was granted an in-principle approval to establish a payments bank by the Reserve Bank Of India in 2015 and commenced operations in June 2017. Rishi Gupta is the managing director and chief executive officer of Fino Paytech. He was one of the founding members of the bank. He holds a bachelor’s degree in commerce from University of Delhi. He is also a qualified chartered accountant and cost and works accountant and member of ICAI and ICWAI respectively.

Prior to joining Fino PayTech Limited, he worked with International Finance Corporation, ICICI Bank Limited and Maruti Udyog Limited. He is also the founding member of Business Correspondent Federation of India (BCFI) and has served as the Chairman of its Economic Affairs Committee. He received a total remuneration of INR 3.04 Cr in FY2021.

Ahuja joined Fino in April 2017 and was appointed the chief operating officer in June 2020. Ahuja has a bachelor’s degree in commerce from Delhi University. Prior to joining Fino, he served as a major in the Indian Army for 11 years and then also worked with ICICI Bank as Deputy General Manager. In FY2021, his remuneration is listed as INR 1.3 Cr.

Merchant joined Fino in 2018 and was made the chief financial officer on February 11, 2019. He has a bachelor’s degree in Commerce from University of Mumbai, and is a qualified chartered accountant from the ICAI. He has previously worked at Barclays Shared Services Limited, Digicel Central Resources (Fiji) Limited, M Holdings Limited, HSBC and Standard Chartered Bank. Merchant’s remuneration for FY21 is stated as INR 1.05 Cr.

Shailesh Pandey is the Chief Sales Officer of the payments bank. He joined Fino in the first half of  2017 and was appointed as the CSO with effect in June last year. He holds a bachelor’s degree in engineering from Shivaji University and a Post Graduate Diploma in Business Management from Sydenham Institute of Management Studies and Research and Entrepreneurship Education.

Vinod Kumar is the chief information officer, infrastructure and facilities of Fino Payments Bank. He joined the payments bank in 2017 and was later appointed as chief investment officer- Infrastructure and Facilities on April 1, 2020. He holds a bachelor’s degree in engineering from Rajasthan University, Jaipur and a master’s degree in business administration from Manav Bharthi University. Earlier he has worked at Teletech Services India Limited, ICICI Bank Limited, Rakbank, and K-infosystems – FZE. In FY2021, he was paid remuneration of INR 76 Lakh

Bharat Bhanushali is the head of business technology in Fino Payments Bank. He joined the payments bank in 2017 and was later given the role of head of business technology on April 1, 2021. He holds a degree in commerce from University of Mumbai and a Professional Diploma in Software Technology & Systems Management from NIIT Mumbai. He has previously worked with Genesys International Corporation Limited, Goldfiled Services Private Limited, Global Software Resources, before joining Fino PayTech. Bhanushali received remuneration of INR 62.8 Lakh in FY21.

Amit Kumar Jain is the head of business alliance of Fino Payments Bank. Jain joined the payments banks in April 2017 and was elevated to  his current role in June 2020. He has a master’s degree in international business from Devi Ahilya University, Indore. He has previously worked with Geosansar Advisors Private Limited, ICICI Bank Limited and Mudra Communications Limited. During FY2021, he received a remuneration of INR 73 Lakh.

Amit Bhatia is the chief marketing officer of Fino Payments Bank. He joined the company in 2018 and was appointed as chief marketing officer from June 1, 2020. He has a bachelor’s degree in engineering from Sardar Patel College of Engineering, University of Mumbai and Post-Graduate Diploma Management from Indian Institute of Management Society, Lucknow. Prior to joining Fino, he has worked at Subhiksha Trading Services Limited, Career Launcher India Limited and Ormax Money Private Limited. In fiscal year 2021, he received a remuneration of INR 58 Lakh.

Pratima Pinto Thomas heads the Human Resource department of Fino Payments Bank. She joined the bank in May 2019. She holds a bachelor’s degree in Commerce, Masters in Human Resource Development Management from University of Mumbai and Post Graduate Certificate in Business Administration (Customised Programme for Defense Officers) from Narsee Monjee Institute of Management Studies. She has served in the Indian Army for 10 years and prior to joining Fino, she has also worked with Vijay Sales, The Mobile Store Limited, and BDO India LLP. In FY21, she received a remuneration of INR 38 Lakh.

Basavraj Loni is Company Secretary and Compliance Officer of Fino Payments Bank. He joined the bank in November 2017 and was transferred to  payments bank’s  Head – Legal and Secretarial from May 6, 2020. He was later appointed as Company Secretary & AVP- Legal of our Bank with effect from May 15, 2020 He holds a bachelor’s degree in law (special) and is an associate member from ICSI. He has experience in the domain of secretarial, legal, corporate governance and compliance. He has previously worked at Priya Limited, Raj Oils Mills Limited, GOL Offshore Limited, and Mahindra & Mahindra Financial Services Limited. In fiscal year 2021, Loni was paid a remuneration of INR 25 Lakh.