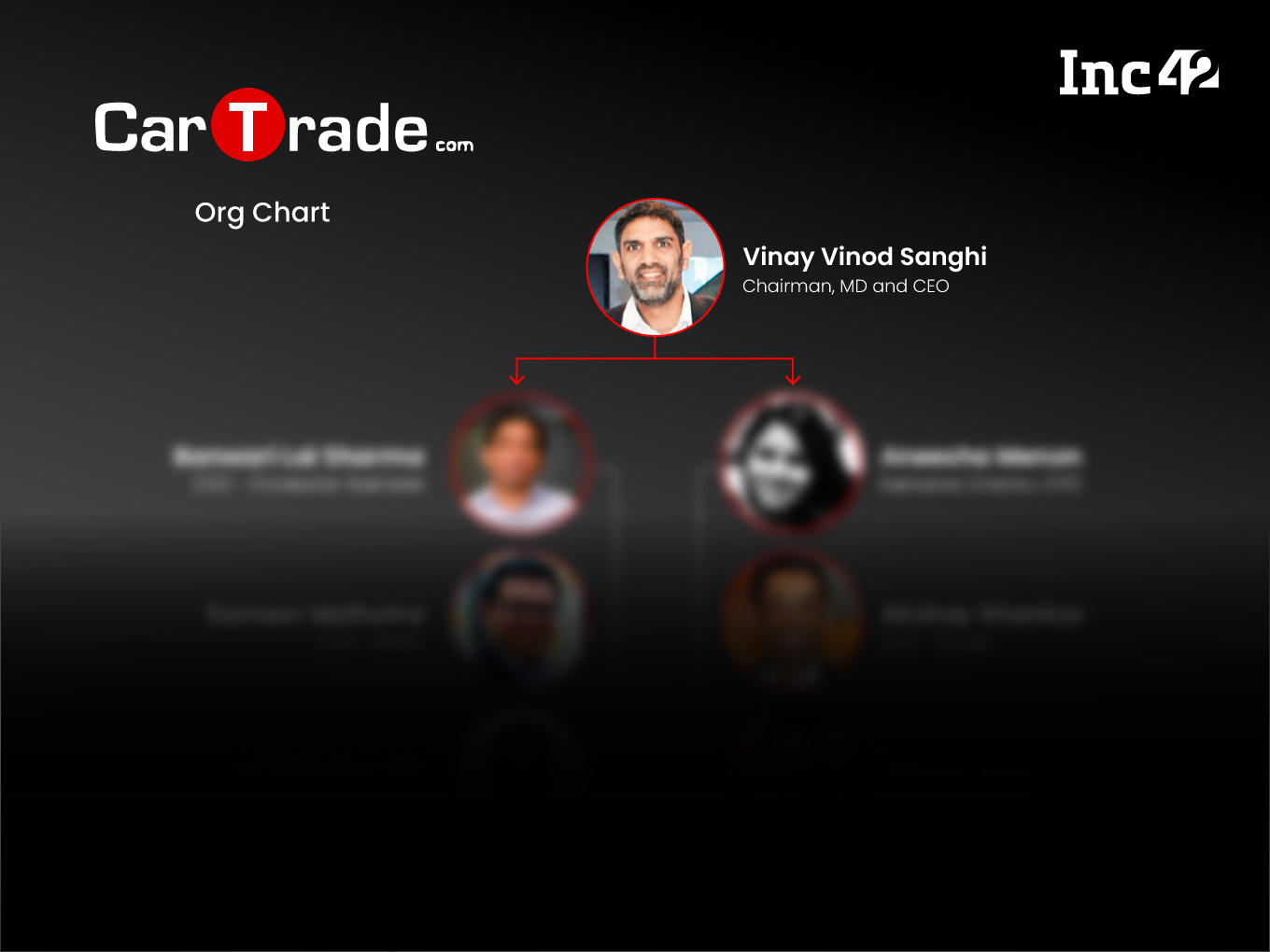 The company is helmed by CMD & CEO Vinay Vinod Sanghi whose FY21 compensation was INR 5.21 Cr

The company’s Board boasts of a former Secretary in the Government of India and an ex-deputy governor of the RBI, among others

Mumbai-based online auto classifieds startup CarTrade filed its Draft Red Herring Prospectus (DRHP) with the Indian market regulator Securities and Exchange Board of India (SEBI) last week, for its INR 2,000 Cr initial public offering (IPO). According to the DRHP shared by Axis Capital, lead book running manager for the IPO, CarTrade will be making a pure offer for sale (OFS) for 1,23,54,811 equity shares of the company.

CarTrade, founded in 2009 by Vinay Sanghi, is an online automotive market for buyers and sellers of new and used vehicles. The company’s online car auction platform has a presence in over 80 Indian cities. As of last year, it claimed to be selling 1 Mn vehicles a year. More than 40 OEMs and 15,000 plus dealers work with the CarTrade Group and it has over 180 owned or franchise stores.

The company has raised $307 Mn to date, with INR 321 Cr coming through its Series H round last June. CarTrade converted itself from a private limited company to a public company last week, ahead of its planned IPO. The company’s registered name is now CarTrade Tech Limited. The company also approved the appointment of its founder and CEO Vinay Sanghi as managing director (MD) of CarTrade for the next five years.

Here is how the top management and Board of CarTrade looks like: 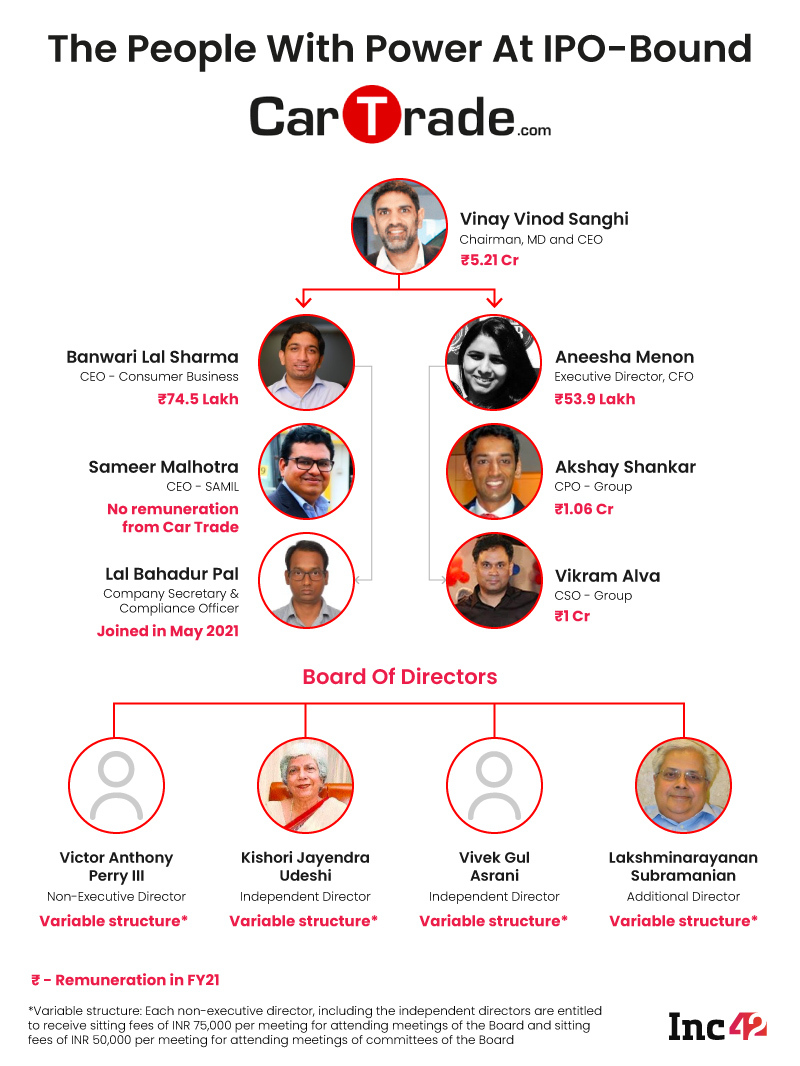 Vinay Vinod Sanghi is the chairman, managing director and the chief executive officer of the company. He holds a bachelor’s degree in commerce from the University of Bombay. He was appointed as the chief executive officer of the company on September 1, 2009. He has previously been associated with Mahindra First Choice Wheels Limited and Project Automobiles (Bombay) Private Limited. He has over 30 years of experience in the automobile industry. He received an aggregate compensation of INR 5.21 Cr in Fiscal 2021.

Aneesha Menon is an executive director and chief financial officer of the company. She is a chartered accountant with the Institute of Chartered Accountants of India. She was previously employed with S. R. Batliboi & Co. LLP and has 13 years of experience in the field of finance. She joined Automotive Exchange Private Limited (an erstwhile Subsidiary which was subsequently amalgamated with the company) as AVP  Finance on December 8, 2015. She was then appointed as the chief financial officer of the company on July 21, 2020. She received an aggregate compensation of INR 53.9 Lakh in fiscal 2021.

Victor Anthony Perry III is a non-executive director of the company. He holds a bachelor’s degree of science in civil engineering from the University of Virginia and a master’s degree in business administration from Harvard University. He was previously the president and chief executive officer of TrueCar, Inc.

Kishori Jayendra Udeshi is an independent director of the company. She holds a master’s degree of arts in economics from the University of Bombay. She is an associate of the Indian Institute of Bankers. She was appointed as deputy governor of the Reserve Bank of India from June 10, 2003 to October 12, 2005.

Vivek Gul Asrani is an independent director of the company. He holds a bachelor’s degree in science from the University of Mumbai. He has over 25 years of experience in setting up distribution networks, organisational systems, manufacturing systems and overall people and process management. He is currently associated with Kamyo Fastener Company and Kamyo Industries, both of which are partnerships.

Lakshminarayanan Subramanian is an additional director (independent non-executive) of the company. He holds a bachelor’s degree of science from University of Delhi and diploma in Advanced Studies in Economic and Social Studies from the Victoria University of Manchester. He was a member of the Indian Administrative Services and has served as a Secretary to the Government of India, Ministry of Home Affairs. He was also appointed as the Team Leader for Care India.

Banwari Lal Sharma is the chief executive officer – Consumer Business. He holds a bachelor’s degree in engineering (computer science and engineering) from University of Technology of Madhya Pradesh. He joined Automotive Exchange Private Limited (an erstwhile subsidiary which was subsequently amalgamated with CarTrade) in 2004 and has 17 years of experience in software engineering. He was promoted to the position of CEO –  Consumer Business of the company on October 1, 2020. He received an aggregate compensation of INR 74.5 Lakh in Fiscal 2021 from the Company.

No remuneration from CarTrade

Sameer Malhotra is the chief executive officer of SAMIL since November 16, 2010. He holds a bachelor’s degree in commerce from University of Delhi and a post graduate diploma in financial management from Sardar Patel College of Communication and Management. He has passed the intermediate examination held by the Institute of Cost and Work Accounts of India.

He has previously worked with companies like Ritchie Bros. Auctioneers (ME) Limited, Ansal Housing and Construction Limited, Empire Finance Company Limited, Premium Finance and Leasing Limited and SREI Infrastructure Finance Limited and has over 31 years of experience in the sales industry.

He has been awarded the ‘Greatest Marketing Influencers’ by World Federation of Marketing Professionals in 2018 and ‘Best Chief Executive Officer (Auto and  Mobility Tech Companies Category)’ by World Auto Forum in 2021. He did not receive any compensation in fiscal 2021 from the company.

Akshay Shankar is the chief product officer of the Car Trade group. He holds a master’s degree in science (with honours) from University of Twente, Netherlands. He has 14 years of experience in product management. Akshay Shankar started his career at ABN AMRO Central Enterprise Services Private Limited.

He was one of the first directors of Nassau IT Services Private Limited, erstwhile owner of the CarTradeIndia.com portal, in 2007. He joined our Company on August 1, 2009 as a product manager and has held technology and product leadership roles since then. Shankar was promoted to the position of chief product officer – group (CPO) on October 1, 2020. He received an aggregate compensation of INR 1.06 Cr in fiscal 2021 from the company.

Vikram Alva is the chief strategy officer of the Car Trade group. He holds a bachelor’s degree in engineering from the University of Pune and post graduate diploma in management from the Institute of Management Development & Research, Pune, India. He was previously employed with Tata International Limited, Webneuron Services Ltd (JobsAhead.com) and Solutions Integrated Marketing Services Private Limited (Solutions DIGITAS).

He has 24 years of experience in building businesses, product management and marketing. He joined the company on January 9, 2012 as senior vice president – marketing and was promoted to the position of CSO on October 1, 2020. He received an aggregate compensation of INR 1.014 Cr in Fiscal 2021 from the Company.

Remuneration: Joined in May 2021

Lalbahadur Pal is the company secretary and compliance officer of CarTrade. He holds a masters and bachelor’s degree in commerce from the University of Mumbai and is admitted as an associate with the Institute of Companies Secretaries of India.