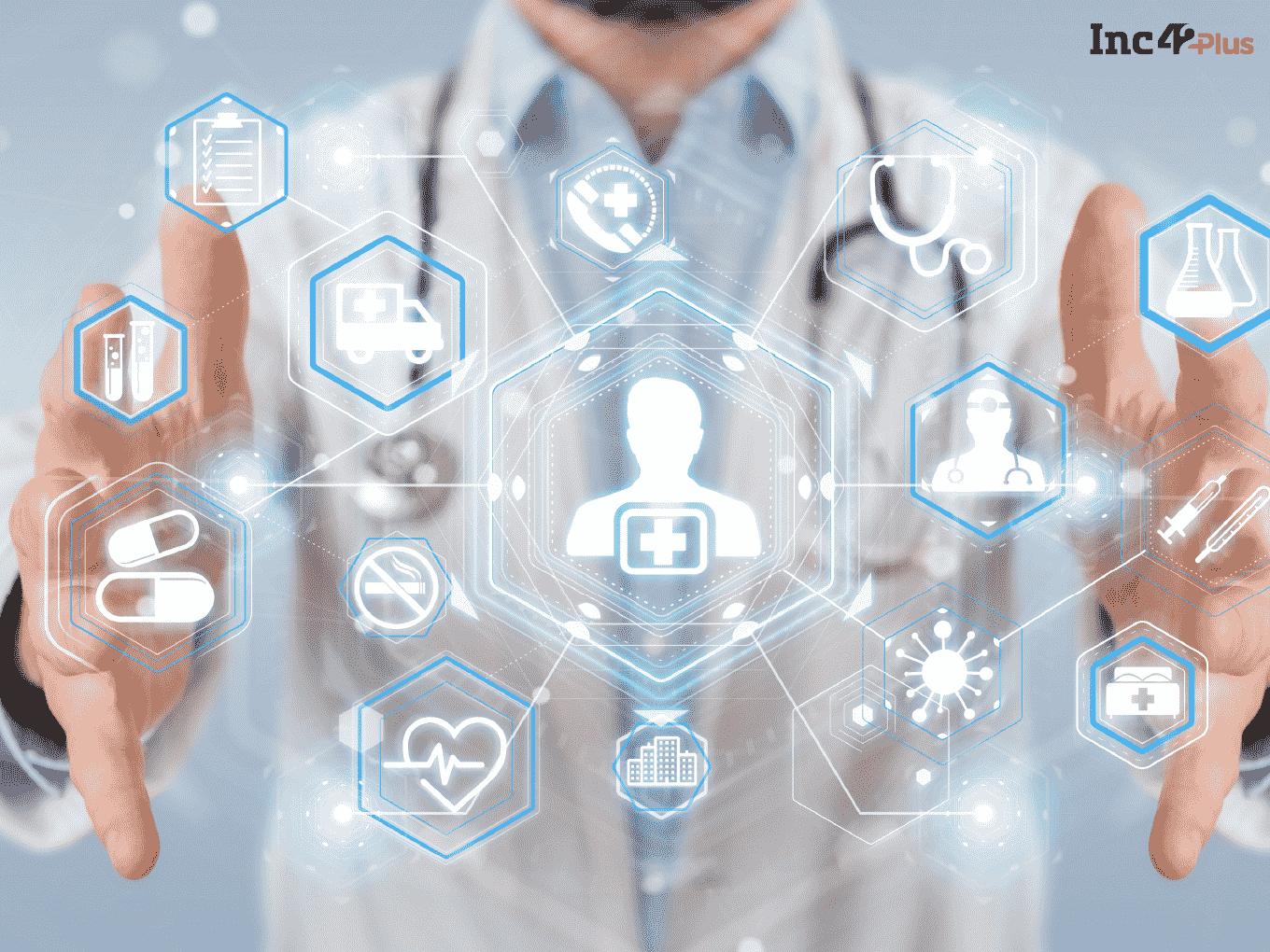 Several healthcare startups including Tattvan E-Clinics, myUpchar, MedCords, Portia Medicals among others have been working towards improving the infrastructure even before NDHM

Digitisation by itself is a good supplement to this lack of access in the healthcare ecosystem, but it cannot replace the need for a doctor, stressed IFF’s Apar Gupta

While the outlook of National Digital Health Mission (NDHM) looks positive with the country’s healthcare infrastructure getting digitised, one can not ignore the already existing gaps in the Indian healthcare system. The significant dysfunctioning, inefficiency, and acute shortage of healthcare delivery systems continue to be a major concern in the country, which have come under the spotlight in the past few months.

To address this gap in the industry, the government has pledged creation of new schools and institutions, however, in the private sector startups working to bridge the healthcare access gap, improve infrastructure, and enhance efficiency have found promising success. The likes of Tattvan E-Clinics, myUpchar, Portea Medicals, Practo, mFine, Lybrate, DocsApp, MedCords among others are not only looking to augment the existing infrastructure but also create new touchpoints to reduce the access gap.

Tattvan E-Clinic, which focusses on remote healthcare, aims to transform healthcare in remote regions through its ‘brick and mortar’ meets telemedicine model. It’s looking to set up franchise clinics in smaller towns, clinics in real estate townships and e-clinics within corporate setups to help achieve deeper penetration of healthcare services.

“India’s current landscape of providing healthcare services lacks massively with respect to the access of primary care and advance care medical opinion in smaller towns, rural areas and various Tier 2 and Tier 3 cities, and as a healthcare startup our focus has always remained at facilitating the healthcare services to the locations that matter the most,” said Tattvan E-Clinic founder Ayush Mishra.

Similarly, regional language-focussed myUpchar which is also into telemedicine said that it aims to solve the awareness and access problem through relevant content in Tier 2 and Tier 3 cities. myUpchar’s cofounder Rajat Garg told Inc42 that innovation needs to be driven by doctors besides corporate hospitals and institutions. If doctors are able to manage their time in a better way, universal health access can be achieved in double-quick time. “Despite being a noble approach, the onboarding for hospitals will still remain a bigger challenge given the practise of offline data storing and bulks of records,” the myUpchar founder added.

According to a recent survey conducted by LocalCircles, a community social media platform, 60% of the respondents favoured ‘Digital Health ID,’ but were concerned about sharing sensitive personal data beyond health and medical records. In reality, data collection is one of the many challenges that exists in the healthcare ecosystem.

However, in reality, when it comes to healthcare, Indians are still dealing with grassroot level problems like the high cost of quality healthcare, inefficient processes, lack of doctors and nurses, and easy access to healthcare in remote, semi-urban and rural regions of the country. According to the WHO report, India’s doctor to patient ratio in the allopathy sector stands at 1:1596 (far lower than the 1:1400 WHO standard) and the country is ranked 145 among 195 countries on the healthcare index. 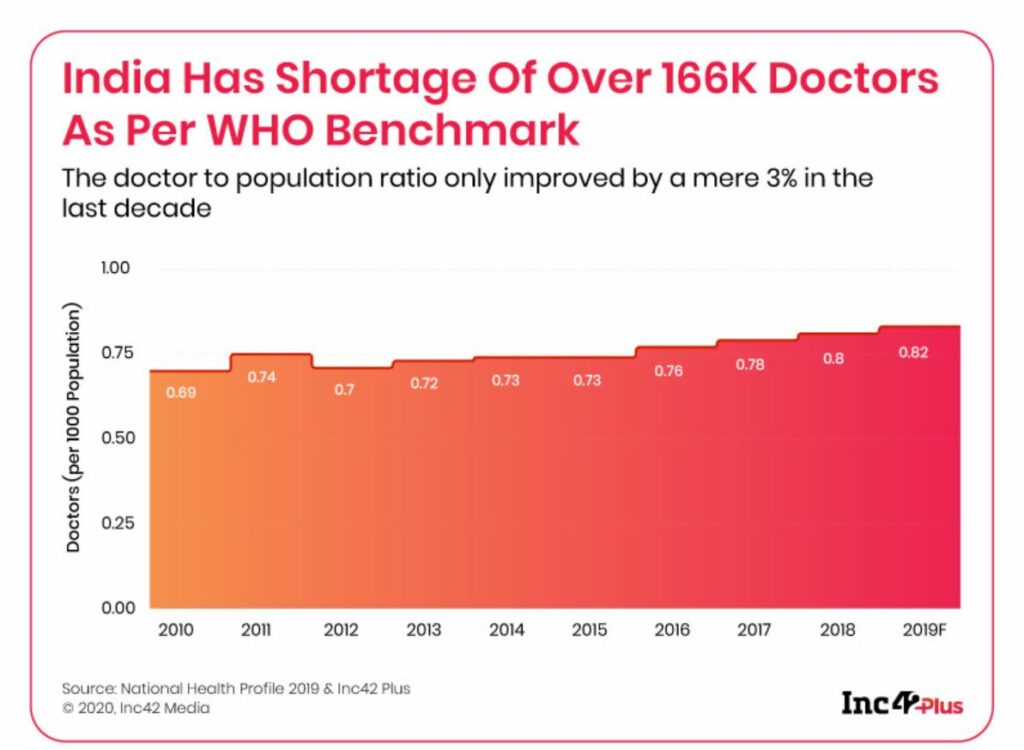 Although a majority of the healthcare professionals are excited about NDHM roll out, some of the industry experts that Inc42 spoke to, said otherwise, and shared their concerns related to NDHM being rolled out before the notification of the PDP Bill.

Throwing light on the same, Aayush Rathi, policy officer at the Centre for Internet and Society (CIS), a non-government research and advocacy entity, said that the history of public digitisation efforts in India have typically occurred in a legal-regulatory vacuum.

Further, he said that the lack of accountable structures is concerning as the involvement of private actors to develop applications and provide insurance being central to the aims of the NDHM is surreal. “While this attempts to take cognizance of matters relating to data protection, law-making through blueprints and executive policies is a troubling development,” he added.

Rathi also said that a whole set of concerns spring up a review of health digitisation efforts which are globally undertaken, which emphasises on the ideologies of ‘tech-solutionism.’ In other words, the notion of assuming that the mere use of technological tools will solve underlying structural issues is superficial.

Apar Gupta of the Internet Freedom Foundation (IFF) also said while there is a tremendous excitement around these products and technological solutions to be built, we sometimes lose focus that the core issue, which has been time and again highlighted by the healthcare practitioners and experts, has been underfunding and lack of capacity in the healthcare sector itself.

He said that people even in large cities sometimes lack medical facilities, it has very little to do with issues of technology, and even more innovative deployment of existing resources can be addressed instead. However, the lack of healthcare providers like primary healthcare professionals like nurses, to much more experienced super-speciality doctors, availability of equipment, and tech does play a very very positive and beneficial role, it can support all these interventions but it needs to be tied into that.

“Digitisation by itself is a good supplement to this lack of access in the healthcare ecosystem, but it cannot replace the need for a doctor,” stressed Gupta, pointing at the shortage of doctors and healthcare professionals in the country.

With NDHM in the picture, a lot of emphasis has been given to the data privacy and security issue of the patient and doctor data. Healthcare policy experts suggested that without an independent third party data protection authority, there will be an absence of clear norm setting in terms of when the data is gathered, its proportionality through the provision of health services and the data is also not used for government projects or made available to the private sector.

Traditionally, there is a function creep in data protection in which the original purpose of which the data is gathered is very different from the eventual use that the data is put towards. For example, health data (which is incredibly sensitive) can later be used not only for insurance services in the private sector and then may also be integrated into the larger profile which is laid out for them. “What about the reliability and trustworthiness of the system,” questioned IFF’s Gupta.

Hence, it is necessary for the data protection law which is right now pending before the joint parliamentary committee to provide for appropriate protection and move towards legislation, stated Gupta.

“Quite often, when we look at health data, it doesn’t always mean that business opportunity has to be exploited. Because ultimately, it has to be with the consent of the person whose actual data is being used,” said Gupta, pointing at Facebook or Google, where users’ personal data is being used in ways to which they never consented, to which they do not even have right for deletion and correction.

Further, to ensure the guidelines for collaboration, Gupta urged for a need of clear legal regulation, standard setting, alongside a clear sense for business operation, keeping in mind the ideal outcome from both the perspective of those who are building these products, exploring these opportunities as well as the user — because at the end it will help deepen the trust between the service provider and the user.

“Let’s not get ahead of ourselves here,” asserted myUpchar’s Garg, adding that healthtech is not even 1% of the healthcare market. “We have hospitals, labs which are roughly about 10K across India, and about 1 Mn pharmacies and equivalent number of clinics which are generating this data.”

Medcord’s cofounder Shreyans Mehta also emphasising on the execution aspect said that though the central government is asking people to share the data, every state in India has a different protocol so how this will play out is also a biggest concern among the healthcare professionals.

“Once you have the basic data coming in from a myriad of data points, tens of thousands of pharmacies, clinics, healthtech companies will have challenges as to how they will differentiate themselves in the space” added Garg, saying that collection of data becomes no more a differentiating factor among the startups.

[With inputs from Yatti Soni]