On India's 73rd Republic Day, we need to acknowledge that Indian startups need a 'Constitution' moment because the future of the tech industry affects us all

Seventy-two years ago today, India celebrated its first Republic Day — a day when the Indian constitution came into effect. It gave generations of Indians the blueprint for governance and social welfare so it is arguably just as important to remember as the Independence Day.

In the context of Indian startups, the past couple of years have brought in plenty to celebrate but it’s come after a struggle. With over $115 Bn funding raised since 2014, 89 unicorns and more than $400 Bn in value creation, the Indian startup economy is growing at an unprecedented rate.

And now as India marks its 73rd Republic Day, we need to acknowledge that Indian startups too need their ‘Constitution’ moment. A different kind of Republic Day.

To be clear, it’s not about an actual constitution, but a clear and unabashed recognition by the government and policymakers of the various issues that are currently plaguing the Indian startup and tech industry.

Yes, there are positives to talk about, which we will tip our hats to, but there’s a lot to catch up with as far as the challenges go.

The National Spotlight For Startups

To start with the good: the year kicked off with the first ever National Startup Day. It is a landmark moment for the startup and tech ecosystem as it brings them under the national spotlight, and gives their contribution an official stamp of approval.

When Inc42 began its journey seven years ago, the word ‘startup’ had just found its way into the Indian lexicon. From having a handful of tech companies to dozens and thousands of innovative new ventures, India’s startup ecosystem has grown immensely in the past decade, and we have been a witness to all the highs and lows —  from the boom of the past year to the stability before that to the downfalls and shutdowns as well as periods of layoffs.

And not just in terms of covering the ecosystem from the very early days, but also helping promote entrepreneurship, and startups across India and being a connecting layer through various events such as our BIGShift series, and our virtual summits in the past two years, annual and quarterly reports, Pitch42 and FAST42 series to directly enable startups and more.

This is the time to celebrate the growth of the tech industry. The rise of tech in India has coincided with the new millennium and the aspirations of a new India, and now begins the next phase. And on India’s 73rd Republic Day, we have a chance to take this momentum forward.

Building On The Startup Story

With the massive transition towards apps, and digital services and products, and an active internet subscriber base of over 834 Mn (as of September 2021), India is now ready for the next stage of tech evolution. 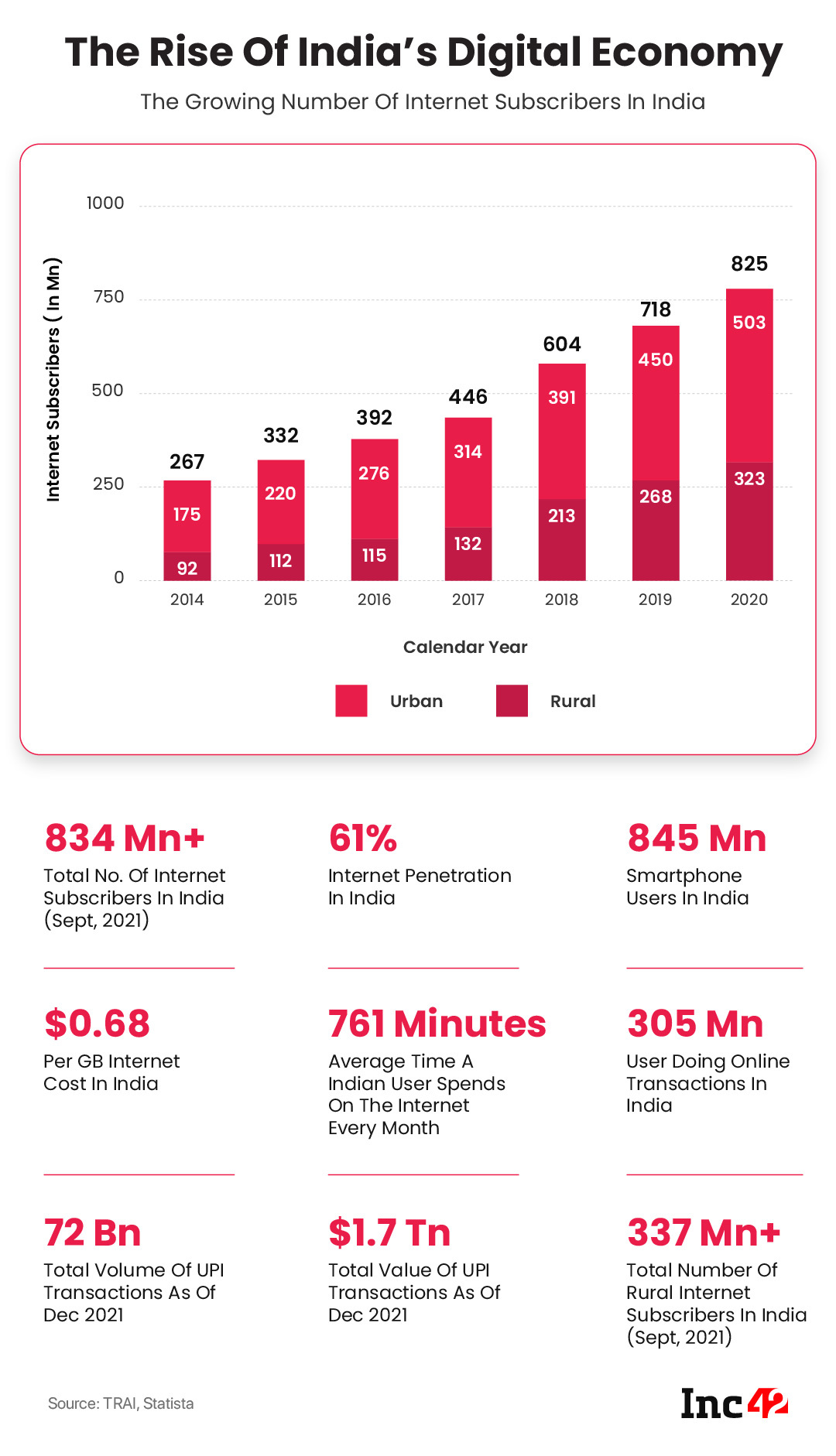 Today, India’s startups alone have created more than 100K white-collar jobs and over 2.5 Mn blue-collar jobs. According to the government of India, startups registered with the Startup India initiative have helped create over 8.5 Lakh direct and indirect jobs since its inception in 2016. The IPO rush among tech companies as well as ESOP buybacks (over $335 Mn in 2021 alone) are also creating wealth for a new generation of Indians, which has given startups an added dimension. 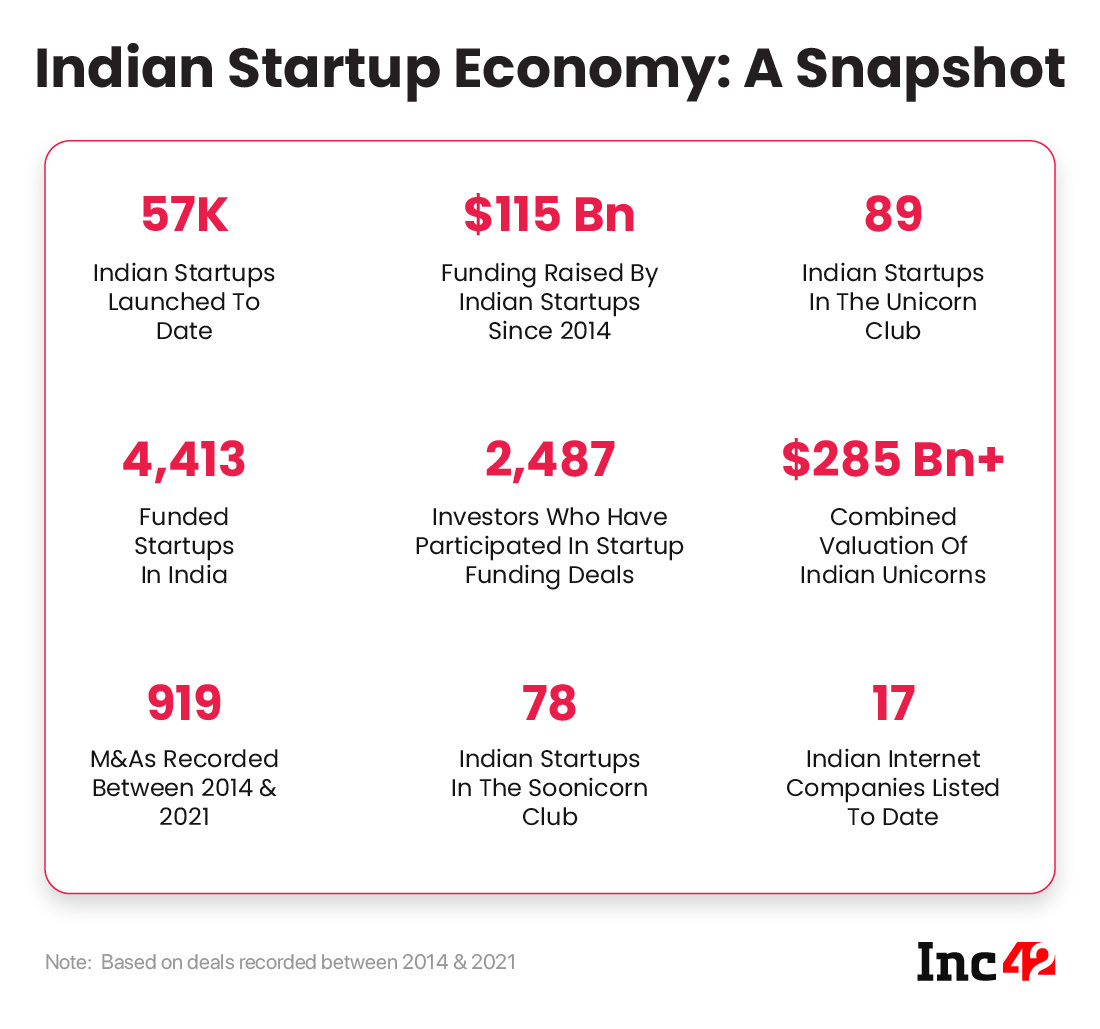 Between 2016 and 2021, we have seen several new policies and platforms creating the infrastructure for startups to flourish. UPI, for instance, has been the backbone of fintech growth, while the streamlining of the patent and trademarks regime has resulted in the improvement of India’s ranking in the global innovation index from 81 to 46 between 2014 and 2021. India’s rank in the Doing Business Report has increased from 142 out of 190 economies in 2015 to 63.

While so far the Indian startup story has just been about tapping into the creamy layer of India, as we settle into this decade, startups have begun to look at capturing the opportunity presented by Tier 2, 3 and beyond, with job creation, skill development and working to improve financial inclusion and reducing the digital literacy gap. 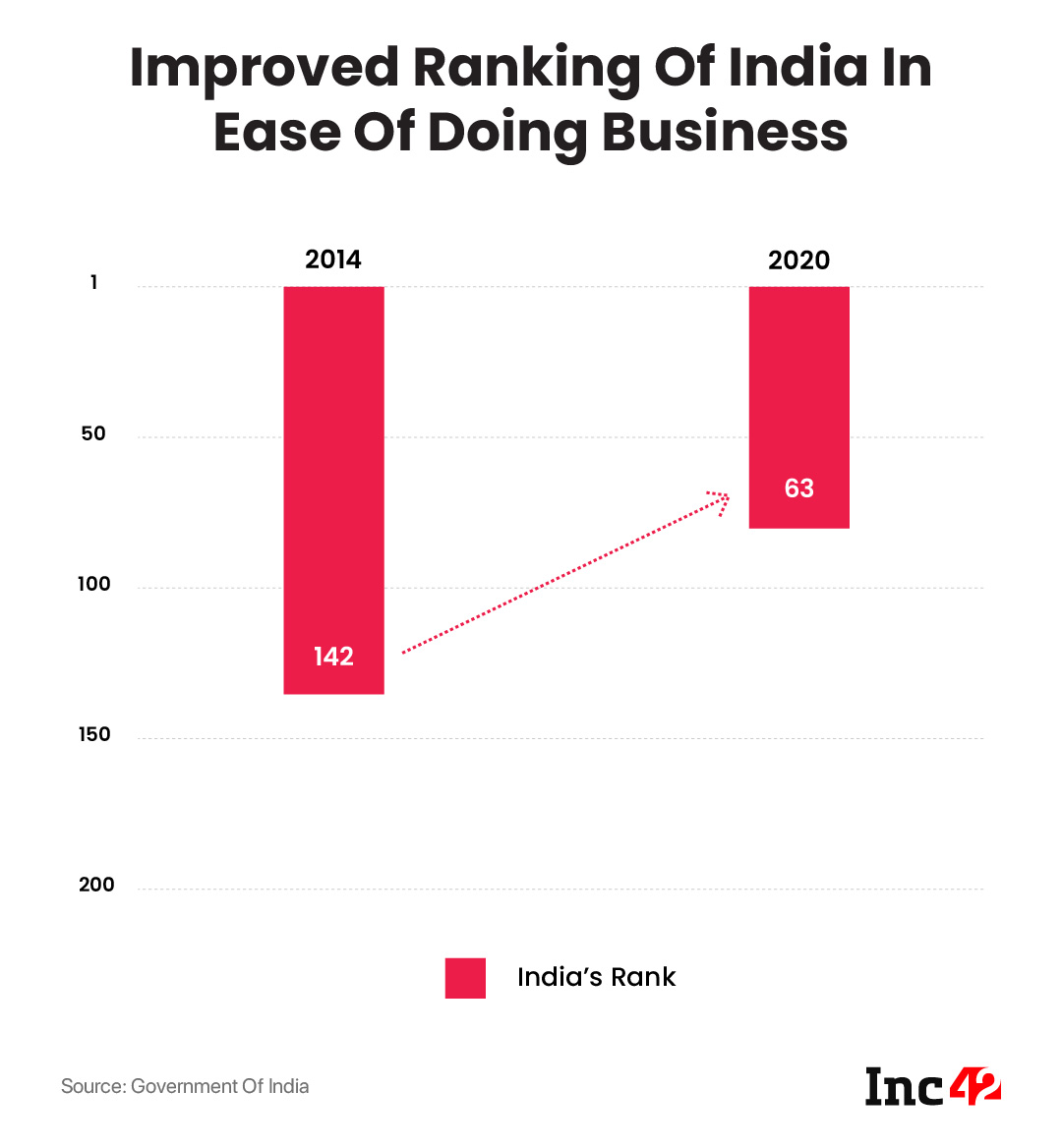 Startups in 2021 are today making the business models of the past obsolete. The rapid pace of development in hyperlocal, quick commerce, and fintech models is a testament to this market transition.

With the good, we have also seen the bad — policy derailing startups and putting the brakes on innovations in many sectors. If the angel tax situation has taught us anything, the government can certainly be a bit heavy-handed when it comes to regulations. It’s only apt to bring this up on the Republic Day which celebrates the constitution, which is often seen as a guiding light for critical issues.

Most recently, this has been seen in the cryptocurrency sector, where there’s so much confusion in the government’s stance and public statements, while at the same time, there’s so much money flowing into the market.

Similarly, in the drone tech sector, The Drone Rules, 2021 have reduced the compliance burden from drone startups significantly, but startup founders have told us in the past that the execution and implementation is delayed.

One could say the government’s focus has definitely been on ecommerce and online retail, as well as data protection, but even there, the policies are in the draft stage. Both of these are critical for the long-term health of the ecosystem.

The government has also targetted edtech in recent months, with some murmurs about a policy being floated to regulate edtech companies.

And what about cleantech, alternative energy and electric vehicles? The next decade will also be about fighting climate change and startups will play a vital role in this. If the government is indeed serious about developing a holistic startup ecosystem, it needs to bring the focus to the critical issues.

For one, startups are looking beyond lip-service corporate social responsibility (CSR) to ESG (environmental, social and governance) thinking in their operations, products and models.

Given the state of the environment today, climate change poses a real threat to life. Consequently, between 2020 and 2029, cleantech and green innovation will be thrust into the limelight. So far policy on these issues has been glacial. But the focus needs to be sharpened because the fate of millions rests on tackling climate change.

Besides global investors, the government has allocated a huge budget to transform the mobility sector with electric vehicles and is incentivising renewable energy, but in the next few years, clean energy and mobility will become indispensable.

The other major stumbling block has been the inertia in launching the Social Security Code to bring in benefits and income stability to gig workers. Beyond this, think about how many women are unable to make the most of this opportunity due to lack of clear policy, or the millions of gig workers who continue to work everyday with no assurance of income the next day.

In the past labour reforms have focussed on the manufacturing sector, but now the tech industry is the dominant employer for many of the unskilled workers. No longer can the gig economy be relegated to the second tier.

Besides the government, it is the prerogative of gig economy companies such as Zomato, Swiggy, Flipkart, Amazon India, Uber, Ola, Dunzo, Urban Company among others to implement these benefits as soon as possible. By 2025, the number of startups in India is expected to cross 100K, creating more than 3.25 Mn jobs in the process.

A Republic Day For Startups

These are not the only challenges; there’s, of course, a lot more to be fixed. We also need plans for continuity of these programmes and initiatives of the past six years if and when the central government changes in the next few years.

A transition in power is often painful for businesses, and startups are more vulnerable to regulatory upheaval than corporations. Now is the time to build systems and processes that protect innovation, a constitution for startups, in a manner of speaking.

That’s why it’s crucial that the National Startup Day doesn’t become mere lip-service or a token day for startups. It needs to become a platform for startups to engage with the government, a forum for tech challenges and for more transparency and openness in policymaking.