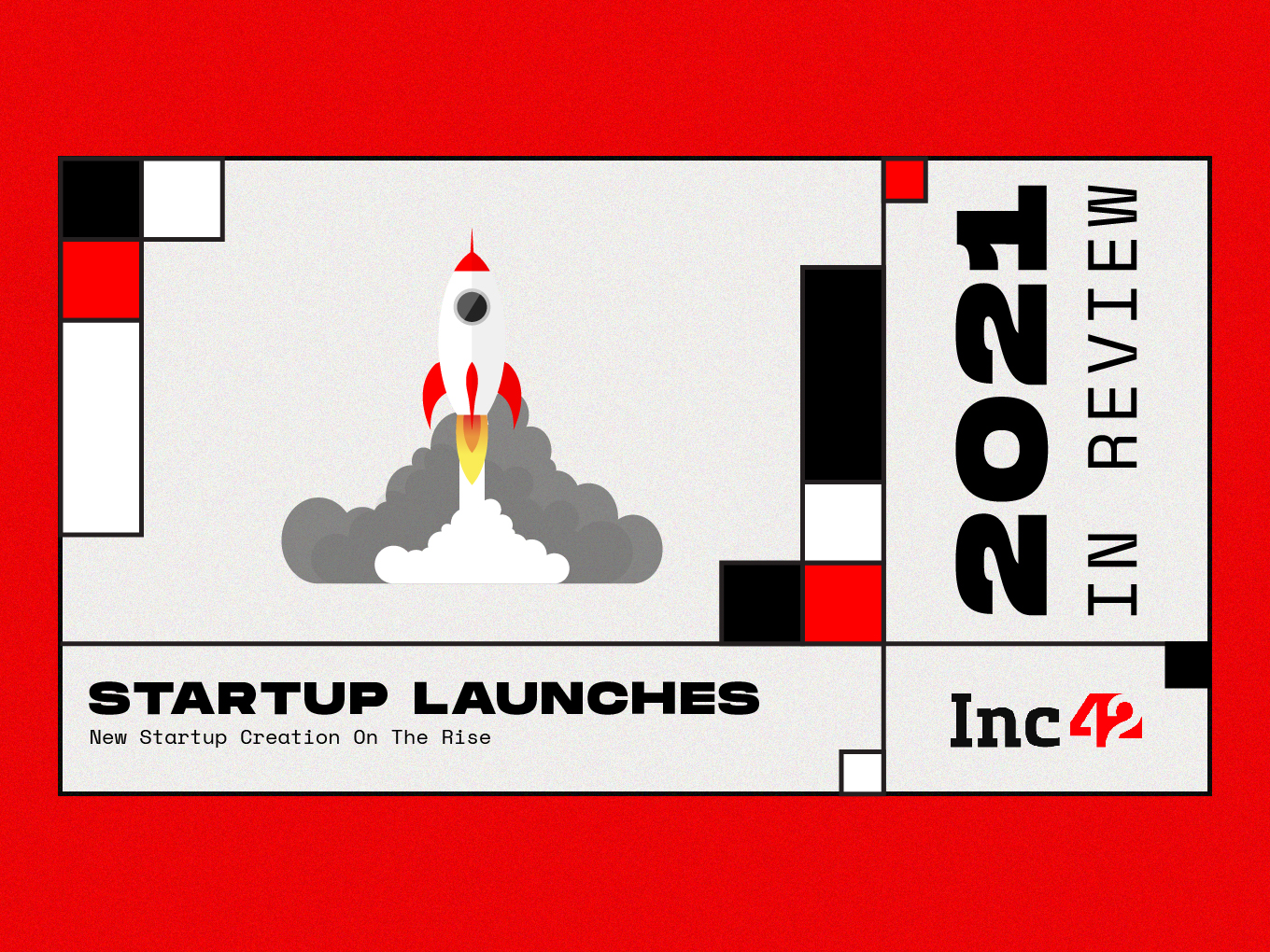 Just among the startups launched in 2021, 71 have raised funding totalling $871 Mn in a single year

Is this the start of a new growth phase for startup creation in India, particularly given the deluge of new ecommerce and D2C startups?

You could chalk it down to “The Great Resignation” or opportunity to find niches amid a major disruption such as the pandemic, but for the first time in six years, the number of new startup launches in India has gone up.

However, the massive surge seen between 2014 and 2018 has pushed the 10-year average to over 4,000 startups, so in comparison the growth in 2021 has been relatively minor. For instance the number of new startups is less than half of what we saw in 2019, just two years ago. 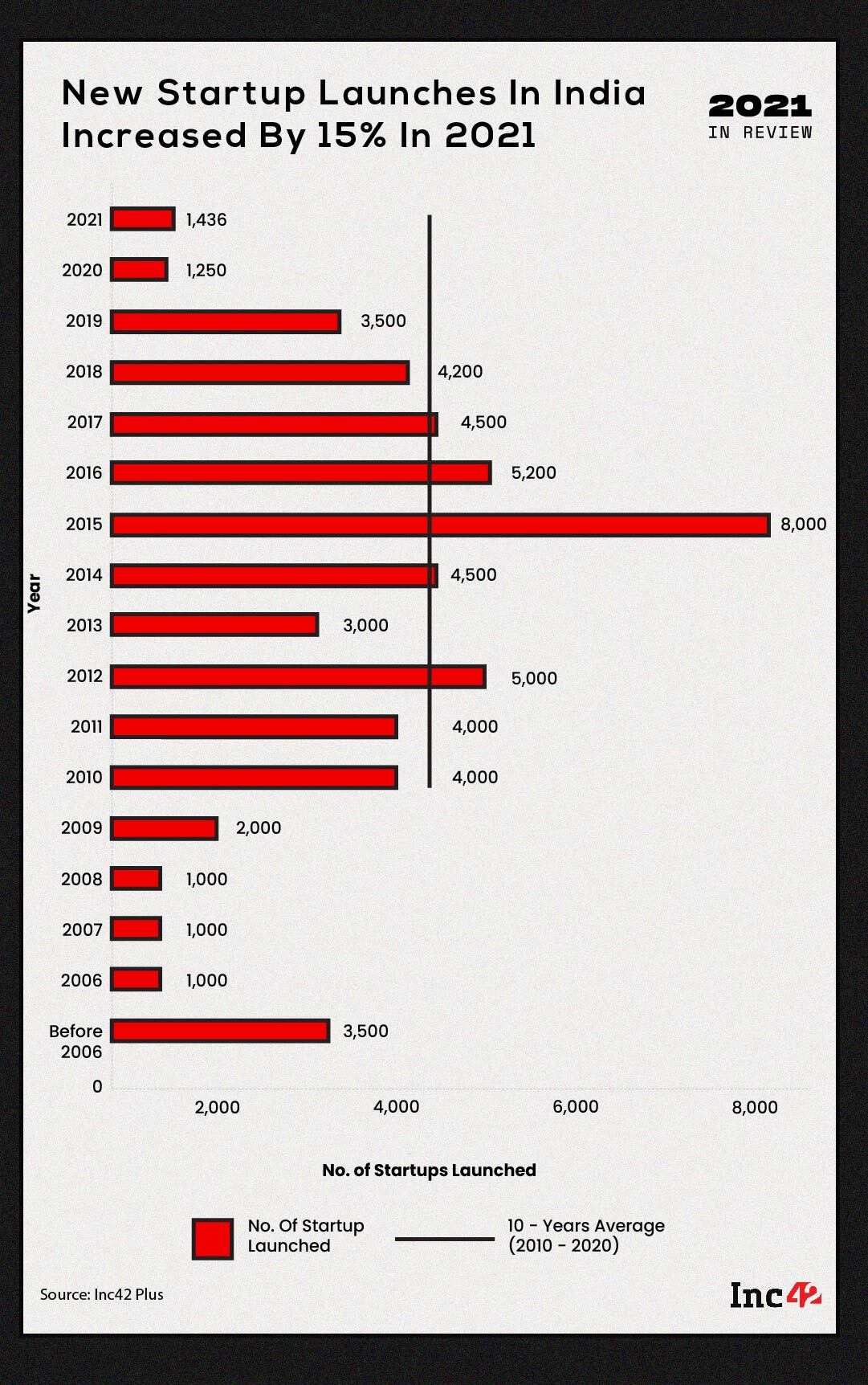 Broadly speaking, the growth is largely due to the surge in technology adoption (830 Mn+ active internet users), the record amount of venture capital inflow in 2021 to the tune of $41.6 Bn and employees eyeing entrepreneurship in the aftermath of pandemic-induced pay cuts and changes in working conditions.

Wealth creation through large ESOP buybacks worth $335 Mn by startups in 2021 and public listings for the likes of Freshworks, Paytm, and Zomato have also been a factor in many higher-level employees and CXOs taking the entrepreneurial plunge.

The deluge of new startups in ecommerce amid the D2C rush, as well as the maturing of the passion economy and creator ecosystem have also contributed to the new startup creation metric.

Further, more than 62 new startup funds were launched, including newly-launched funds as well as older funds topped-up or refreshed. According to Inc42 analysis, about $6.2 Bn has been raised by these new funds, looking to invest in a fresh breed of startups in the post-pandemic world.

Many new startups came up as a result of the block on Chinese apps in the Indian market to a certain extent, which fueled an anti-China sentiment against even those apps which were not banned.

Of course, just the fact that the number of new startups has grown is no indicator of future success for these startups. As seen in the past such booms, there was a spate of shutdowns as many new startups tried to capture market share in the trending sectors, but the less-successful ones were consumed by consolidation waves or simply wound down.

Startups that have raised funding in 2021 have already started consolidating market share through acquisitions, and this is likely to continue in 2022 and 2023. Smaller startups in hot sectors will likely be snapped up by the bigger players.

New startups are also attracting funds in a major way, as seen in the case of GlobalBees and Mensa Brands — both of which turned unicorns — as well as Zepto and GOAT Brand Labs. If we look at the seed stage funding in 2021, more than $1 Bn was poured into startups over more than 1,149 deals. But just among the startups launched in 2021, 71 have raised funding totalling $871 Mn in a single year.

Having said this, while 2021’s growth is definitely a positive development, it is not a guarantee of future growth, nor is it a definite indicator of startup creation rising in 2022 and beyond. But we can definitely sense a shift in narrative around tech startups because of the value created by digital services and products in the past couple of years.