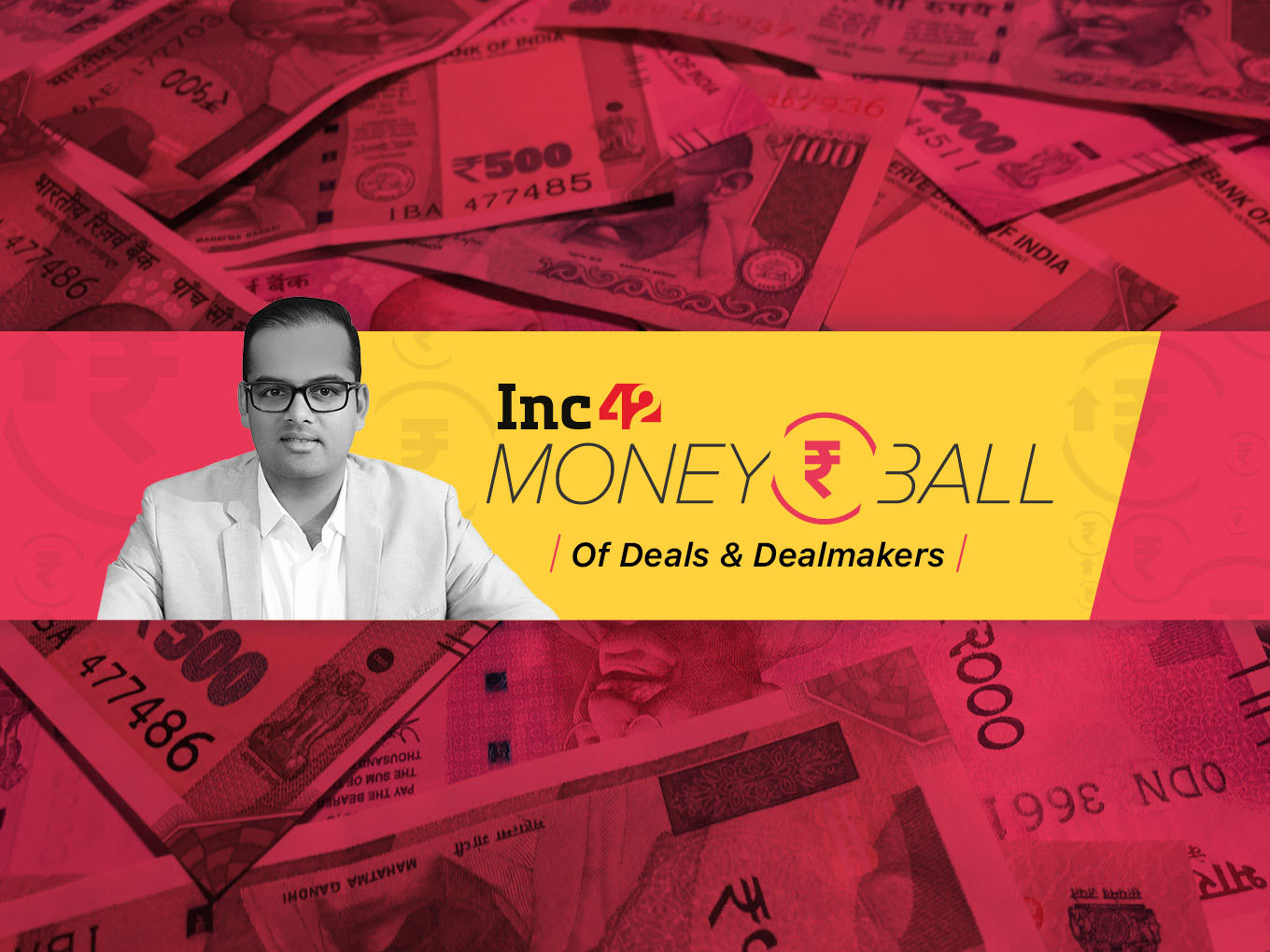 Artha Venture Fund aims to make its second close of $27.4 Mn by July next year

According to Damani, there is a paradigm shift happening in consumer confidence in India

Anirudh Damani describes himself as a 6-ft man with a 30,000-ft dream in his Twitter bio. Damani, who comes from a family of entrepreneurs, has always had high-flying dreams. His entrepreneurial journey has led him to successful investments such as OYO and BookMyCab to finally launching the family office’s first institutional fund, Artha Venture Fund-I, earlier this year.

A big believer in India’s consumer story, Damani told Inc42 that he doesn’t believe India is a poor economy and counts its strong banking sector, independent regulator, and insulation from export shocks as the country’s key assets.

“I look at the consumption basket and it is changing drastically. Almost anyone who has been in the job for 20 years has seen his/her income go up…2018 is the year in which a millennial would have worked at least for one year…so, what this does is that we go from an economy and a mindset that used to be of ‘what I earned yesterday, I will spend today’ to ‘I will consume today what I will earn tomorrow’,” Damani said.

According to Damani, there are going to be a lot more homegrown brands and fintech is a great enabler of the consumer sector.

“I can’t believe the last time I transacted offline…last two times I was travelling abroad I didn’t take local currency and survived about 15 days without using any form of cash,” said Damani.

The early-stage venture fund has till date invested in two startups, which include $170,000 in Haazri, a tea-and-snack quick service restaurant startup, and $250,000 in LenDen Club, a peer-to-peer lending platform. Damani adds that the fund only started investing from July as there was a lot of paperwork that needed to be done even after the announcement of the first close that took place in the same month.

According to Damani, the deal flow of the fund is expected to speed up. He added that between 10-12 deals are in the “advanced pipeline” with 3-4 deals set to be closed in the next 2-3 months.

Here are excerpts of this week’s Moneyball with Anirudh Damani, a Managing Partner of Artha Venture Fund. 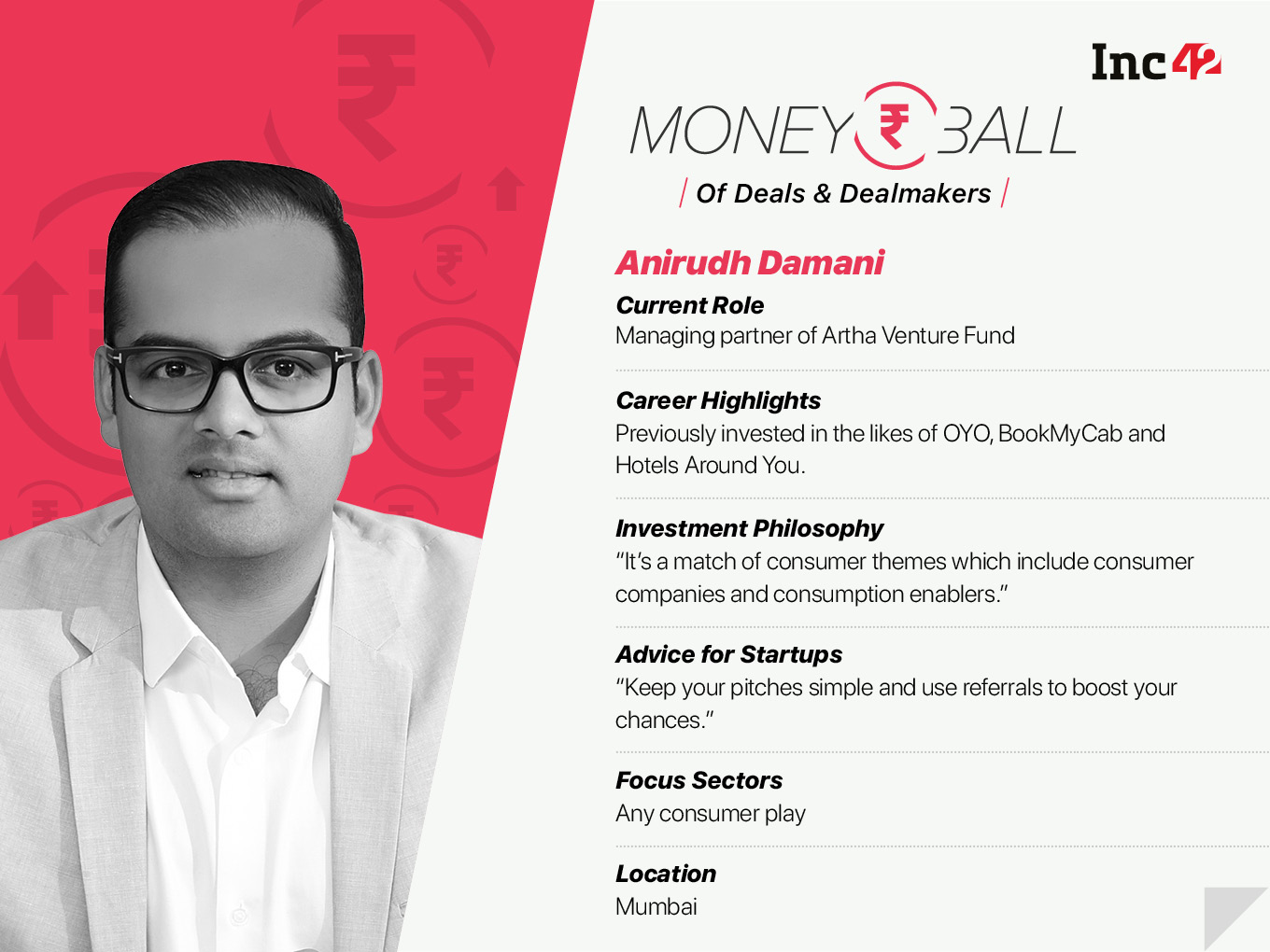 Inc42: How has the experience been since launching the fund and making its close in June?

Anirudh Damani: We are learning the ropes of how to utilise the money, but more process oriented…we already had processes but this is more regulatory challenged so I think we are getting faster and next quarter we should see at least 3-4 investments.

Inc42: You were targeting to invest in three-four companies by September, and you have ended up doing two, could you tell us what’s the update on that?

Anirudh Damani: We announced the first close of the fund in July and we thought we would be able to start investing money almost immediately but there was a lot of paperwork and the final approval by SEBI was by February. Right now we have between 10-12 deals that are in the advanced pipeline and we will look to close three-four in the next two-three months.

Inc42: What are the new things you are having to adapt to since starting the fund ?

Anirudh Damani: I think the biggest change has been that you have to deal with all the regulations and once you have all the due diligence you have to go to the trustee and get his/her approval. We had one deal wherein we went to the trustee and he said technically you cannot invest in the company because the structure is not ok and then brought out some SEBI circular from 2012 which has nothing to do with the reality today and we had to go back to the drawing board and figure the whole deal from scratch.

Earlier it was just easier, I had more freedom but now I have to make sure it is within the regulations and that’s been a learning curve.  But these are the nuances which every new fund manager goes through.

Anirudh Damani: It’s a match between overall themes we like. All of them are consumer-facing and include consumption enablers of which I consider fintech, logistics and reputation management platforms are a part of. We look at B2B sector as well.

Consumer lending is pretty under-penetrated in our country and the more we have platforms that the consumers can lend from, it makes the pile bigger. At present lending at an enterprise level is taken care of but the rest suffer from a cumbersome process. Debt is a very important piece in creating wealth.

Inc42: Per capita Income is still quite low in India and but we have a large young population and growing middle class, how do you access this dichotomy?

I don’t think India is a poor economy, we are a strong banking economy, independent regulator and are insinuated from export-oriented shocks because we import a lot and are consumption driven.

So the per capita income is at $2,000 right now and will be $4000 within six years if you to take into account the GDP and inflation.

The Indian economy will double in less than five years.

Inc42: How do you factor this in with your approach?

Anirudh Damani: I look at the consumption basket and it is changing drastically. Almost anyone who has been in the job for 20 years has seen his/her income go up, 2018 is the year in which a millennial would have worked at least for one year.

Millennials are also releasing that the income is going up and certainty of a paycheck is stronger. So, what this does is that we go from an economy and a mindset that used to be of “what I earned yesterday, I will spend today” to “I will consume today what I will earn tomorrow”.

This is a paradigm shift in consumer confidence.

At present, we are seeing consumer brands going through the roof, so at $4000 it will be even better.

If you look at China’s house to debt GDP ratio, it is sitting at 48%-49% and they have grown that from a 16% base in eight years and essentially have tripled the household debt in eight years and compare that to India where we are sitting at 10%-11% …we haven’t even lent to people who need to be lent to, so the potential is enormous.

Anirudh Damani: So the model for it has been to incentivise the user for sharing and one you stop incentivising, people stopped transacting. There has to be a good enough hook and for people to continue to use the platform without getting the incentives for doing so. I have seen a few startups that are able to do this.  I wouldn’t be interested in a platform that is heavily incentivised. Indian are very smart at figuring out loopholes.

I am interested in Aadhar to crater alternative ways of credit scoring people, we have invested in Tala which does that, the first time we have a way of tracking their commercial behaviour. If this can be put this in the SME world it’ll be great.

Inc42: What is the range you invest in and what stake do you take?

Lot of M&As are happening in India and investors along with secondary funds are increasingly getting involved. We look at holding our position in companies for a  period of at least four-five years wherein three years is our investment cycle and two years we keep holding and in that time we expect the company to build significant value.

Secondary funds are going to become more active in the times to come and the kind of stake that they look to acquire is what I believe we hold in our positions.

Inc42: What advice for startups looking to pitch?

Anirudh Damani: Try to make things simple… the elevator pitches these days are so convoluted and we probably have 5 minutes to decide. We have 2,000 startups sitting in our pipeline in various stages and the entrepreneurs have to make it easier for us to evaluate them and at the same time, they also want to meet!

Unfortunately, we don’t have the time and if you have referrals they can be of crucial help.

Anirudh Damani: We want to reach $24.7 Mn (INR 200 Cr) by July and we are looking pretty good and will also activate the greenshoe option of an additional $13.7 Mn (INR 100 Cr). I have met a few fund managers who are looking at first-time funds with many of the funds currently being foreign.

A lot of fund of funds and family offices from Singapore, Hongkong and the GCC region, are interested and we are talking to them. A lot of them want to also make a direct investment but want it to be on an informed basis and so we become enablers of that as well.

Inc42: Any insights on Family offices who are increasingly getting involved as investors?

Anirudh Damani: They want more exposure, I have met some of these family offices where a lot of the wealth was held in fixed deposits as they were not confident about equity and have seen volatility in the past. But we have been in a low volatile world in the last 10 years.

Inc42: Seed funding in India has dipped, how do you see it?

Anirudh Damani: Depends on how you define seed, In India, we tend to say seed investments happen before angel while globally it is angel then seed.  I am talking about angel globally and seed in India and yes it has seen a bad cycle, because a lot of the investors have realised that seed investments require a lot more effort in terms of time especially when compared to a later stage company and so now you see a lot of these pre-series A rounds which are getting bigger.

We run a type of accelerator/fund/mentorship platform all in one and I don’t think there is enough bandwidth available in people to do this.

This article is part of Inc42’s MoneyBall series in which we bring you up close and personal with the pioneers of the investment world. It has been lightly edited and condensed for clarity.

Dive in to find out about what excites them, their views on the latest technology and investment trends, and what the future looks like from their viewpoint! Explore more stories here.

Note: Artha India Ventures is an investor in Inc42.