Gurugram-based online travel aggregator ixigo turned profitable in FY21, with a revenue boost from the acquisition of railway ticketing platform Confirmtkt in February this year. In FY21, ended on March 31, 2021, ixigo reported total income of INR 138.4 Cr, up 22% from FY20. It also turned profitable reporting INR 7.5 Cr profit in FY21, as opposed to a loss of INR 26.6 Cr last year.

Le Travenues Technology, the parent company of ixigo, has filed its draft red herring prospectus (DRHP) with capital markets regulator SEBI to raise INR 1,600 Cr through an initial public offering. The revenue growth was led by a 107% increase in ticketing revenue in FY21.

The company’s IPO will consist of a primary component which will include an issue of fresh shares worth INR 750 Cr and an offer-for-sale, meaning allowing existing investors to offload their shares, amounting to INR 850 Cr.

The issue is expected to give an exit opportunity to early investors like Elevation Capital (earlier called SAIF Partners) and Indian smartphone manufacturer Micromax.

Inc42 had earlier reported that online travel aggregator MakeMyTrip recently scored an 8X return on its investment in ixigo. The Nasdaq-listed company exited ixigo when it closed a pre-IPO funding round worth $53 Mn led by Singapore-based sovereign fund GIC along with participation from other investors. Earlier this month, Le Travenues Technology Private Limited converted into a public limited company, and is now registered as Le Travenues Technology Limited.

Following its acquisition of Confirmtkt in February, the company also acquired Abhibus, a Hyderabad-based bus ticketing and aggregation platform, in August.

This can be attributed to the increase in the number of transactions post the acquisition of Confirmtkt. The acquisition meant that Confirmtkt’s revenue was consolidated with ixigo’s for the entire financial year with the subsidiary contributing to INR 14.4 Cr revenue.

However, advertising revenue during FY21, dropped by 83% due to Covid related restrictions. In FY20, the company had introduced OTA operations for flights and increased convenience charges for train tickets which contributed significantly to revenue growth during the fiscal year. 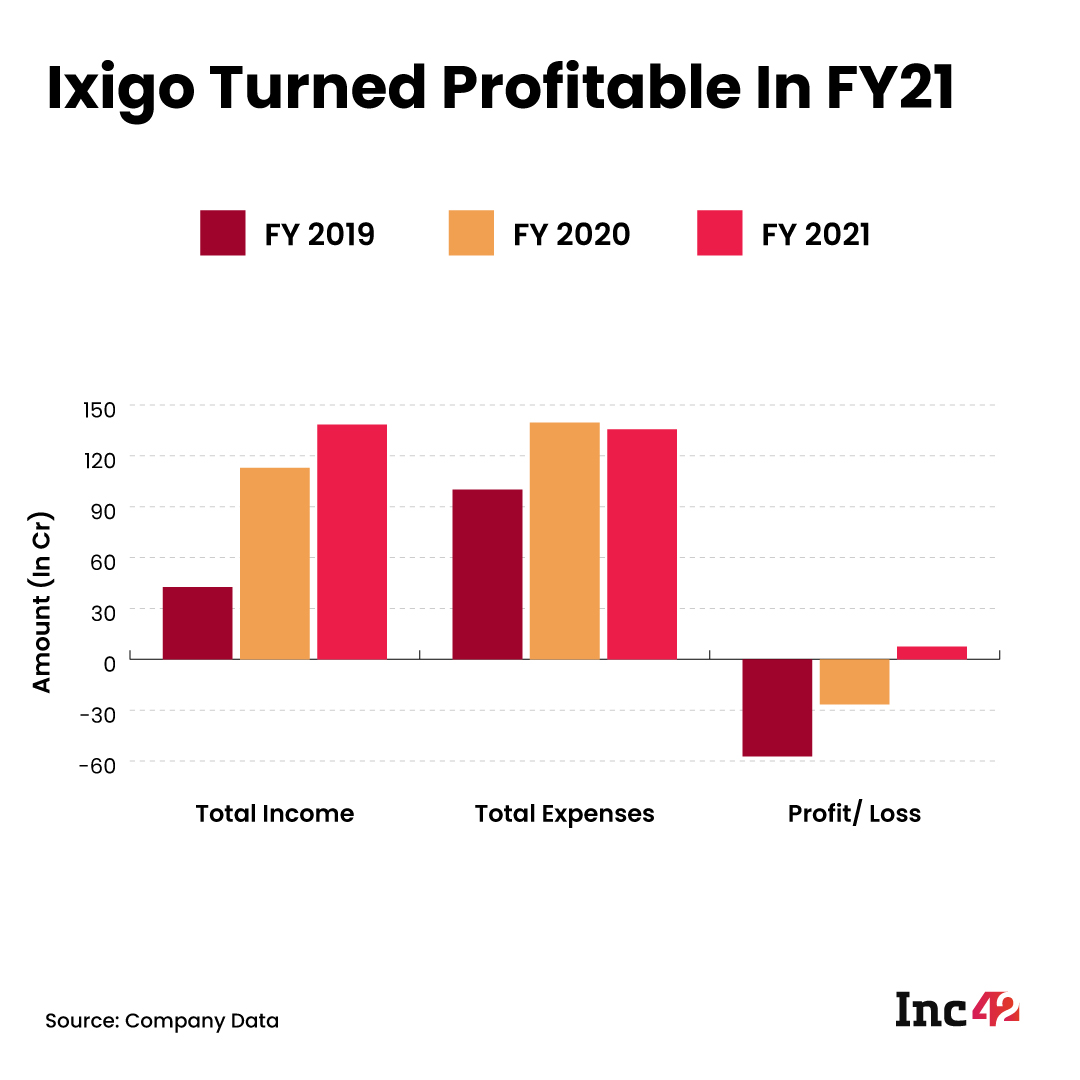 ixigo’s total expenses decreased by 2.77% from INR 139.6 Cr in FY20 to INR 135.7 Cr in FY21, primarily due to decrease in depreciation and amortization expense and changes in fair valuation of preference shares getting reduced to nil. ‘Other expenses’ have remained high and gone up by 19% year on year during FY21.

The reason for the increase in other expenses to INR 97.4 Cr during FY21 was largely due to Covid-related cancellation and support services. The second wave, coinciding with the first quarter of FY22 i.e April to June 2021, had a similar effect, noted the company. Spending on outsourcing and customer support solutions and partner support costs went up during FY21.

But ixigo reduced payment gateway charges from INR 13.8 Cr in FY20 to INR 7.3 Cr in FY21 due to better rates negotiated with payment gateway partners, as well as an increase in UPI transactions, it stated. 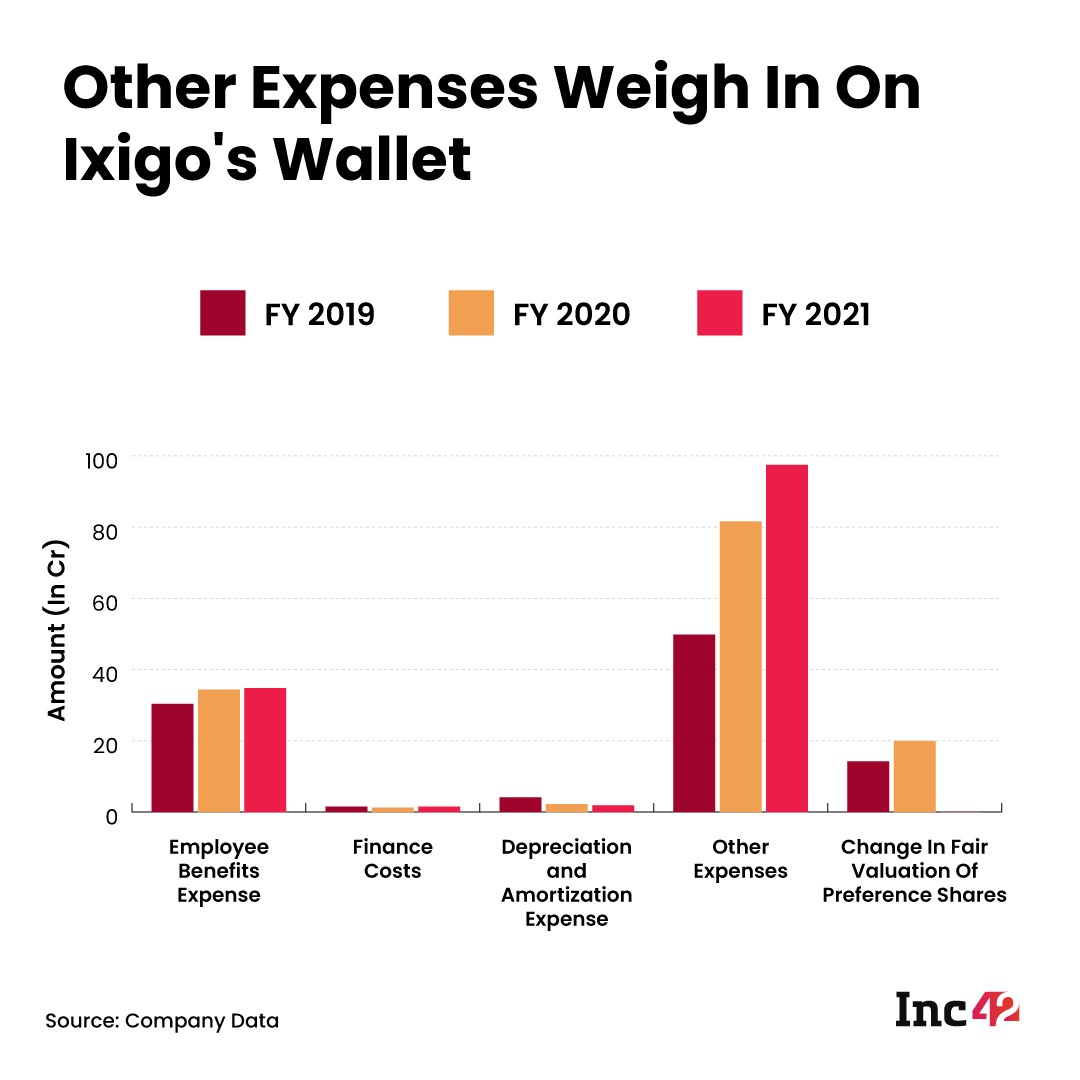 The online travel sector is currently dominated by MMT and its subsidiary Goibibo. According to industry estimates, MMT currently holds 65-70% of India’s online travel market, while the rest, including Yatra, EaseMyTrip, Flipkart-acquired Cleartrip, ixigo and the new entrant IPO-bound Paytm together make up the remaining 30-35% of the industry share.