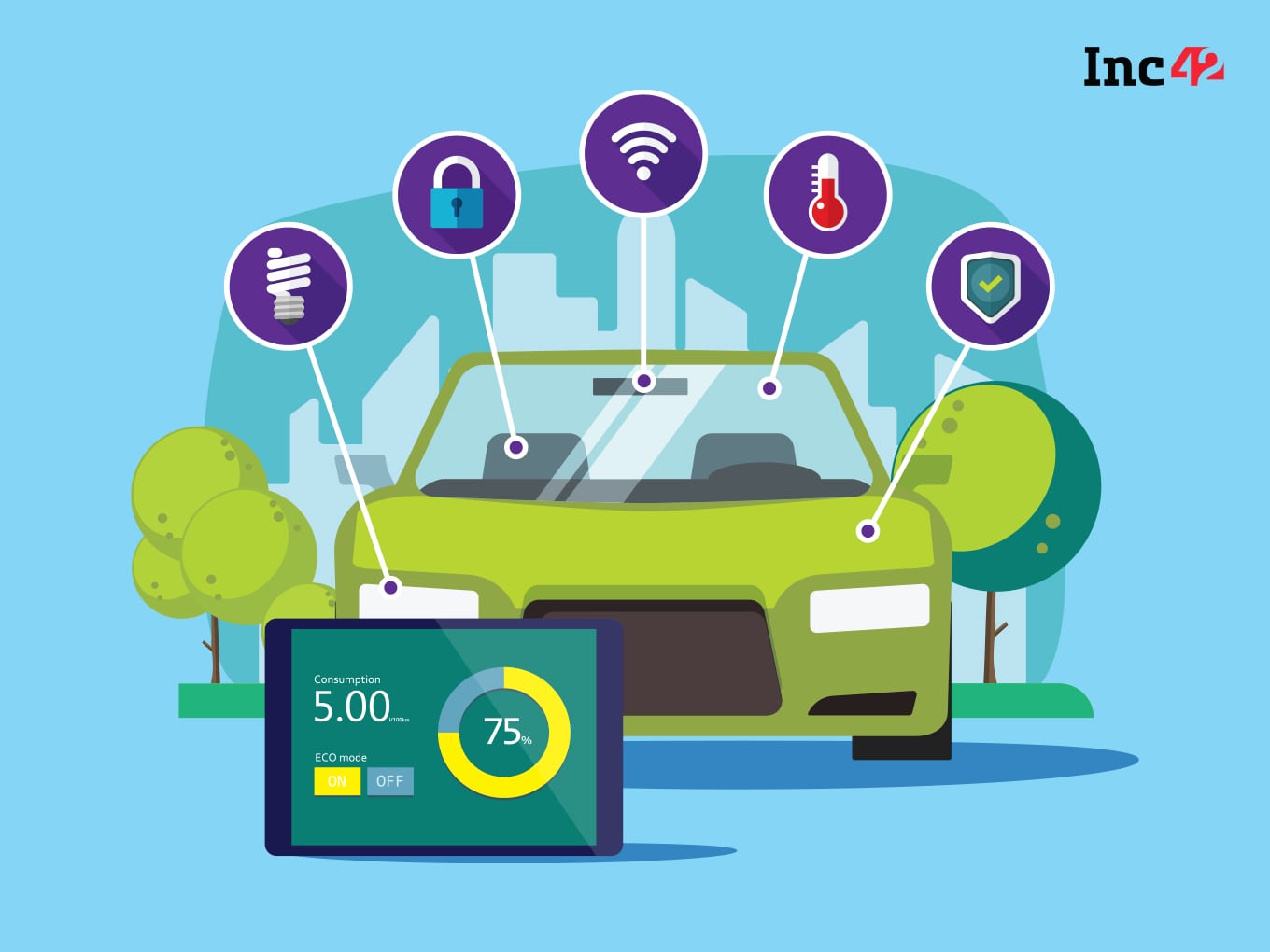 If charging infrastructure and localisation of lithium-ion cells are two of the most pressing concerns for the EV industry currently, changes in certifications, caused by constant upgradation in technology, is also turning into a hindrance. For many concerned stakeholders, especially startups, keeping up with multiple certifications and recertifications can not only be time-consuming, but it can also burn a hole in their pockets.

Take, for instance, testing a bus battery pack of 200 kWh, which roughly costs as much as $40K-50K today. Now imagine if destructive testing was done on this pack, post which it becomes completely unusable, that’s a lot of money down the drain for the battery company or the bus maker.

For the uninitiated, homologation, also called certification, is the approval needed for any vehicle before it goes into the market. This is mainly done to ensure vehicle safety and to keep a check on the emissions. And, whenever a new product or a new vehicle component is introduced a company has to go for recertification. Additionally, if there is a policy change, for instance, the introduction of FAME 2 and the push for localisation, the startup has to go for approvals.

“The amount of money we are spending on certifications and homologation of the same vehicle with either different batteries or different motors is unjustifiably large. Every time we have to spend close to INR 20 Lakh to get one vehicle fame approved,” said Sulajja Firodia Motwani, founder and CEO of Kinetic Green Energy & Power Solutions Limited.

Motwani also added that when the company has to do a different battery, again they have to repeat all tests which costs around INR 12 to 15 Lakh. Additionally, as India moves towards more comprehensive standards that are used globally, the tests become more stringent and comprehensive, making it difficult for some players to cope. Having the latest test facilities, national standards, trained manpower for carrying out the testing and certification activities in place is no easy task.

This is despite exhaustive work done by the approving agencies in India like the Automotive Research Association of India (ARAI) and International Centre for Automotive Testing, ICAT in updating facilities, bringing out and amending standards at par with the international standards, training manpower, among others. Certification is also essential for the quality of the vehicles on the road for the safety of commuters. However, making standards tuned to Indian conditions, demography, driving habits and many such parameters is not an easy task for them either. According to industry leaders, India’s standards are somewhere mid-way between very liberal and very stringent, again leaving a lot of scope for uncertainty. Certifications are categories under the class of vehicle with certain EV specific functional safety tests. India’s standards are based on global standards, though usually customised for Indian conditions.

In the context of EVs, ARAI or ICAT’s role in the entire standards and certifications process is quite extensive. “In addition to being the body under BIS that finally approves standards and gives certifications, ARAI is also involved in research on many aspects of electric vehicles, specifically in the context of their quality and performance,” said Narasimhan Santhanam, cofounder and director, EV Next, a marketing intelligence and strategy consulting firm for emobility

Other key roles for ARAI in electric mobility are in awareness creation programs and training workshops for various stakeholder segments — these are especially relevant given the nascent state of the sector.

Automotive regulations are in place primarily due to two reasons:

Vehicular accident deaths in India are one of the highest in the world. More than 1.5 lakh people died in accidents in 2018 in India. We need features like ABS (anti-lock braking system) and ESP (Electronic Stability Programme) to make sure that the vehicle stops or behaves the way the driver intends. We also have crash compliance norms like NCAP, BNVSAP (Bharat New Vehicle Safety Assessment Programme) for safety. 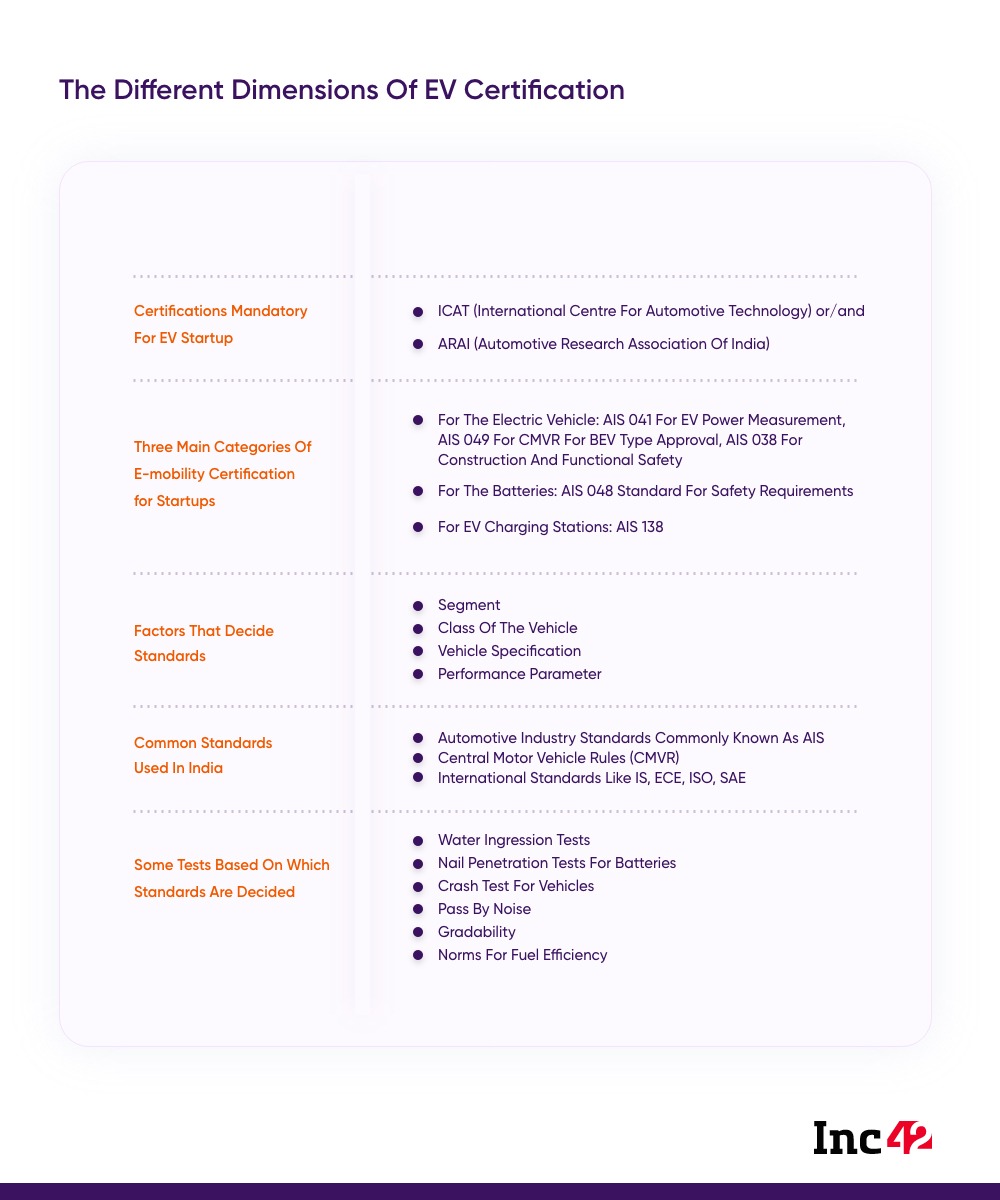 India also requires the vehicle to stop at a particular distance when drivers hit the brake. Now imagine if there were no regulation or rules to control and standardise all these systems. We will have much higher accident rates, carmakers will make cars the way they want which may not be in the best interests of the planet or the creatures of the planet. That is the reason why certification agencies are in place.

When new technologies come in, they too need to be regulated and that can be confusing. For instance, companies cannot apply the regulations and standards applicable to a 12 V lead-acid battery packaged under the bonnet to a 600 V Li-ion battery which is packaged under the floor. The latter can prove fatal if required safety systems are not in place, unlike a 12V battery. So companies need a completely different set of certification rules.

The other challenge is the high cost of testing and certification. Some of the tests involve destructive testing. This could be very expensive for new manufacturers or suppliers. The startups are spending crores to meet government norms just because of a different battery or motors.

Last but the most important challenge faced by startups is that they often get into the activity of certification without sufficient knowledge ending up wasting time and money.

“There is no such mechanism as of now that the agency sends information to startups about certification. Startups need to check the information with the agencies like the ARAI, ICAT, etc and rely on concerned websites or directly communicating with them,” said Srinivas Reddy, MD, Everve Motors.

Talking about the transition from FAME (Faster Adoption and Manufacturing of (Hybrid) and Electric Vehicles) phase I to phase II, and the problems of homologation due to that, Motwani said, “We had to get all our vehicles re-homologated for FAME 2 compliance and the time was too short first of all and there was some amount of ambiguity in terms of localisation, which was the issue in first two quarters. Many of us lost 3-4 months in the transition between FAME 1 to FAME 2.”

Reducing the cost of certification is what the industry players have been demanding from the government for many years. They also say that rationalising certification is important so that recertifying something in an “assembly” that has already been certified as a component can be minimized to the extent possible.

“While the government’s intent might be positive, the unrest these frequent changes create in the market are not encouraging as leaves a flux in the market. Better and more planned and aggressive schemes will be welcome to bring stability & adoption,” said Akash Gupta, cofounder and CEO of last-mile mobility provider Zypp.

EV players also expect the government to study global standards for EV-related safety certifications and include more functional safety certifications for EVs in India to make safer vehicles to run on Indian roads. “One of the expectations would be shorter lead time for testing and certification. This will certainly be a motivation for the entire industry at large,” said Jeetender Sharma, founder and MD, Okinawa Autotech.

However, to expedite the process, the government needs to authorise more private labs, consultants and companies which can check compliance on behalf of government certified agencies for few not so critical certifications. Getting more stakeholders — especially OEMs and battery makers — involved in the standards-setting process is seen as one of the solutions for both cutting costs and turnaround time.

The EV industry today also demands a clear roadmap along with milestones and targets clearly defined as that can make the regulations, processes and certification standards much easier to hook on to. They also say that ambiguity in clauses in some cases can act as loopholes which some unscrupulous stakeholder in the value chain will take advantage of and hence a clear unambiguous language can go a long way.

“Certifications are very much needed. They can be a speed breaker but cannot be a hurdle to EV adoption. Although simplifying the process could be a catalyst, passengers standing changes and amendments and complying could be a daunting task,” said Ujjwal Bhardwaj, cofounder and CEO, Electrifuel Private Limited.

Another two interesting ideas often brought to the discussions are self-certification with certain auditing or under the bond so that startups can develop their own test facilities and addition of topics related to standards, certifications or homologation in the college curriculum. “The EV industry is at a very nascent stage and all the players are working towards exploring better options and products for customers. Simplifying the certification process will save lead time in new product launches, which is very important in the current scenario,” said Okinawa’s Sharma.

Sujoy Chourasia, a Delhi-based consultant for startups shares few tips for startups as well which include planning for high-expense aspects such as certification. In India, some of the pioneering and revolutionary activities in the Indian EV space are being done by startups. Considering the above challenges, and because we as a country are grappling with the complexities and challenges of the technologies, standards and regulations associated with EVs, it may take some time before the dust settles down and things become clearer.