[The Outline By Inc42 Plus] Ecommerce Turns On The Fireworks

The times are surely changing. The other day, on an evening stroll, I overheard a group of senior citizens discussing the best deals for Diwali. There was a Flipkart camp and an Amazon camp. It was almost surreal to behold, but this is festive shopping in 2021.

Even as ecommerce goes through its biggest churn in years, there’s a great amount of optimism in the air as the festive season sales kicked off last week. This year, ecommerce sales are expected to set new records, while at the same time, direct-to-consumer (D2C) brands are vying for a piece of the emerging user base.

Compared to the festive sales in 2020 where ecommerce platforms had a gross merchandise value or GMV of $7.4 Bn, in 2021, this is expected to grow by 23% to $9 Bn, according to a RedSeer report.

While the flagship sales will end by mid October, the spirit of discounts will linger in the air for a fair bit longer and well into November. And this year, marketplace giants — the likes of Amazon, Flipkart & Myntra, Snapdeal as well as Reliance and Tata — have to compete with D2C brands and platforms as the fight for the consumer dollar enters social media channels and the wider web.

Perhaps, the biggest twist in the ecommerce tale has come in who is shopping online. In major metros and cities, the ecommerce fever is relatively less intense this year than last year.

In larger cities where malls and retail outlets are opening with great fervour again, individuals are itching to go out after months of the lockdown in many cases, and this means that the ecommerce growth is primarily being fueled by Tier 2 and 3 cities.

The launch of Reliance’s Jio World Drive in Mumbai this week is a clear signal to the wider retail market that things are back to normal again. Jio World Drive is billed as a retail entertainment destination and the focus is very much on bringing people out of the home.

But in smaller cities, where retail development has been stalled for the past 16-18 months, This flipping of the market has created a new plane of opportunity for ecommerce players and the future of ecommerce in India could very well be shaped by who is able to capitalise on the new user base emerging from smaller towns.

More proof is in how marketplace majors Flipkart and Amazon India spoke about their respective festive sales. Both emphasised that demand from Tier 2 and 3 cities has been the key momentum driver. 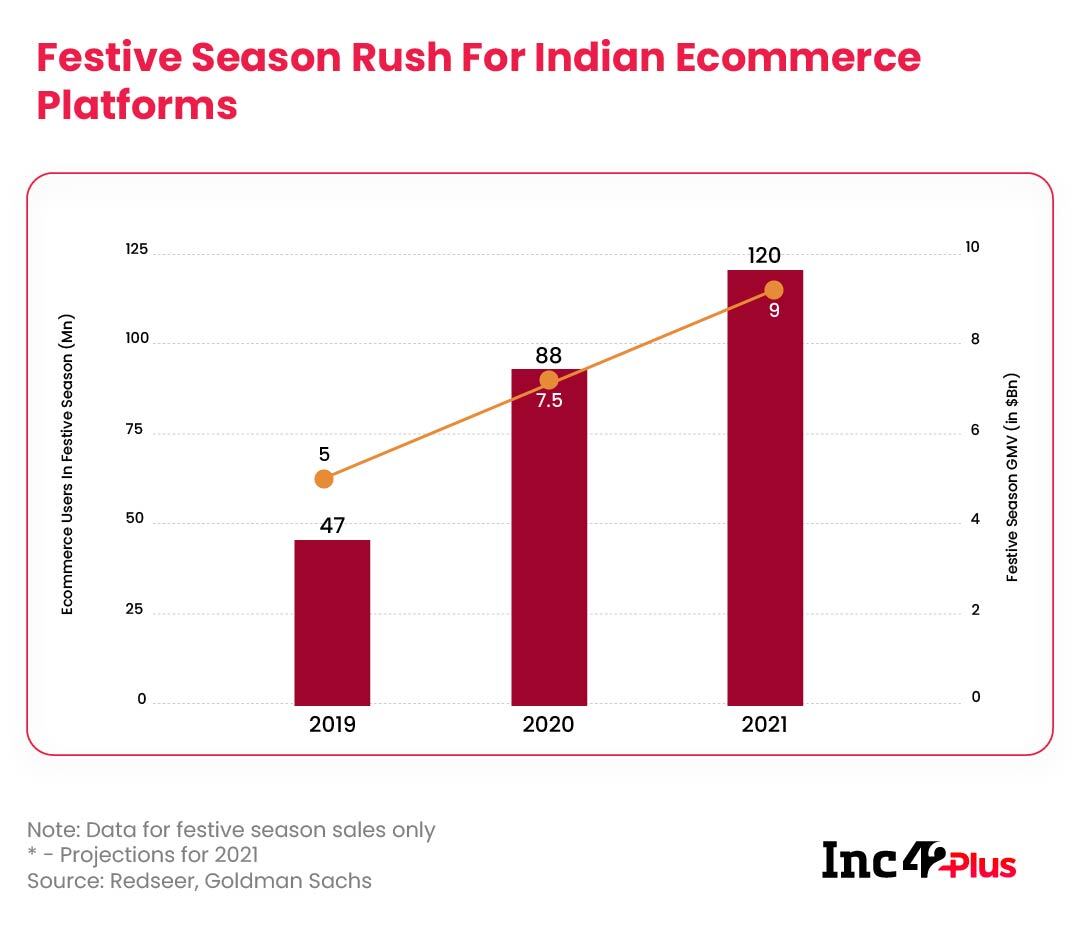 Flipkart has The Big Billion Days (TBBD) sale, Amazon India is running the Great Indian Festival (GIF), while other players like Reliance-owned Ajio, Flipkart-owned Myntra, Snapdeal, Tata Cliq and others are also holding similar sale events on their platforms.

Walmart-owned Flipkart said ‘Flipkart Plus’ programme (loyalty programme) saw a big jump among this user base, while 45% of all customer demand has been from smaller cities and towns. There are 124 new cities/towns from where sellers transacted in the first 24 hours, the company said.

Amazon India sang pretty much the same tune. It said the number of local shops participating in the event more than doubled compared to last year, essentially pointing out how smaller retailers are selling on Amazon.

The ecommerce giant also said two out of three new Amazon Prime subscriptions came from Tier 2 and 3 cities, with such customers shopping in eight Indian languages. Plus, the number of sellers receiving an order from Tier 2/3 cities jumped by 21%.

The Booster Shots For Ecommerce Adoption

If it surprises anyone that small town Indians are splurging on online shopping after a year and half of the pandemic, the clue lies in how that time was spent by Indians. Most new internet users have a faster ramp to the wider app, social media, digital services and product ecosystem than the new users even four or five years ago, according to ecommerce market analysts we spoke to.

It’s obvious when you think that content is everywhere these days and this wasn’t always the case — there was a time when you had to actively scout for new products and apps. It’s hard to escape content and ads that are trying to grab your attention these days though and that’s a big key in the customer acquisition journey.

5 Strategies For D2C Brands To Level Up Their Game This Festive S...

How Web3 Is Revolutionising The Indian Gaming Industry

How Startups Can Leverage Data Virtualisation To Accelerate Machi...

Layoffs & Downsizing: How Startups Should Help Teams Navigate The...

Festive season ad spending will be comfortably higher than 2020 and may even exceed pre-Covid levels, according to digital marketing agencies. They estimate that ecommerce and retail are expected to be the highest spending categories.

Marketing brings consumers in and fintech services and products are ensuring that carts are not abandoned before checkout due to payment or affordability issues. Buy Now Pay Later is arguably the biggest example. 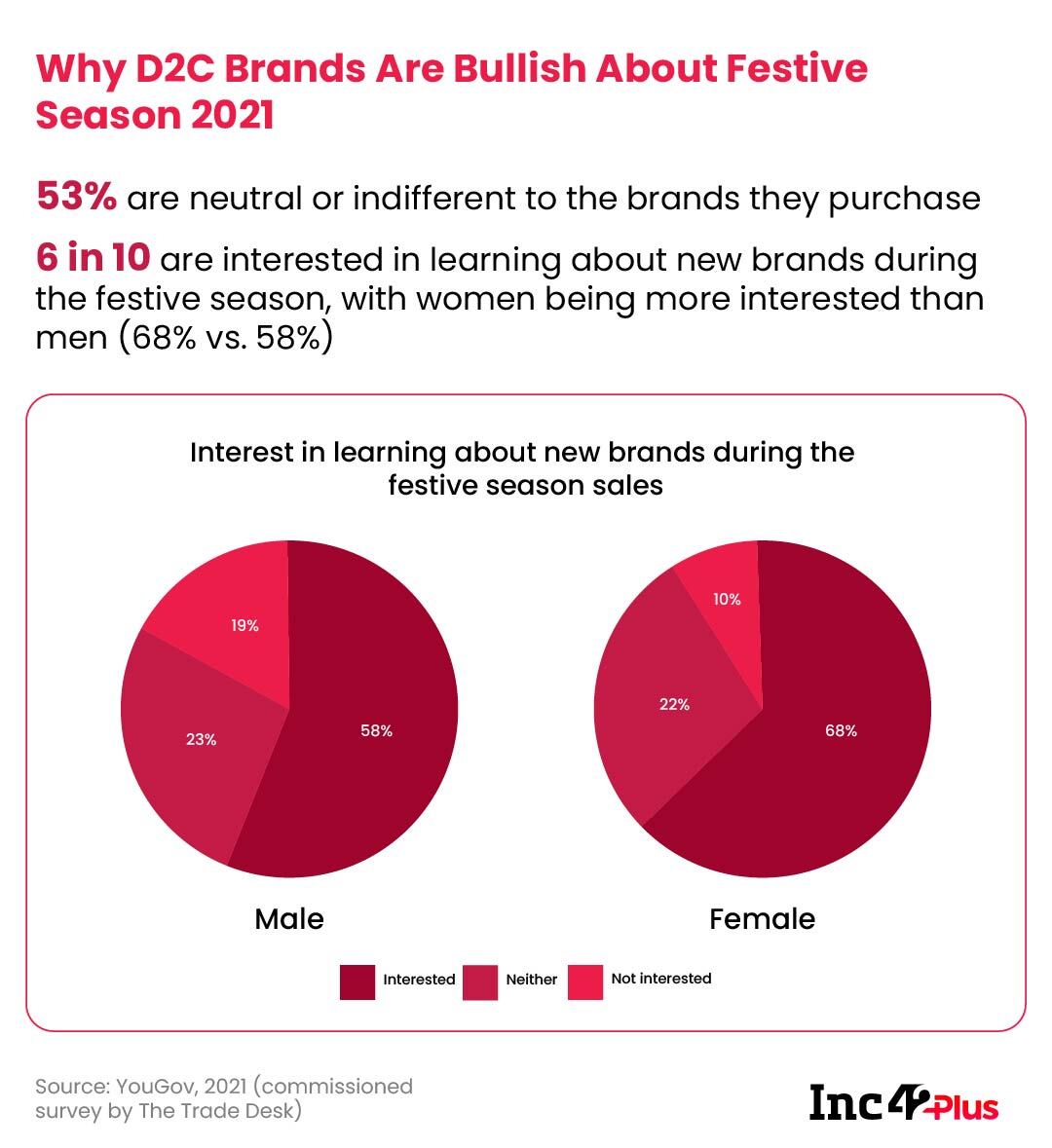 Amazon said the ongoing GIF has seen a 10x surge in Amazon Pay Later compared to non festive season purchases. Flipkart said BNPL accounts for the second-highest share of payments after paid orders, and has surpassed UPI for its platform. Like Amazon, it claims to have seen a 10x jump in BNPL sign-ups since October 03.

Posting a compound annual growth rate (CAGR) of 36%, India’s BNPL sector is expected to reach $100 Bn by the end of 2023. Within the BNPL niche, ePayLater competes with the likes of Simpl, Zestmoney, CashE, Paytm Postpaid, PayU’s LazyPay, Amazon Pay, Flipkart Pay Later among others.

These startups are seeing a massive uptick in ecommerce adoption. Bengaluru-based Simpl predicts a 30%-50% jump in adoption this festive season with purchases in the range of INR 400 to INR 6K per user.

While CashE is expecting 30% month-on-month transactions growth in October and November and is confident that average ticket size will increase from the current INR 15K to INR 20K closer to Diwali in November.

Amazon claims small and big-ticket purchases alike are being enabled through BNPL depending on the customer profile, with purchases even going up to INR 60K.

The biggest reason for BNPL’s growth is the relative lack of friction in onboarding customers. The easy signup process is akin to paying by a credit card, where a limit is ascribed to every customer and this means there’s no elaborate KYC process. It’s all linked to the customer’s account on the ecommerce platform or their mobile number.

This is said to be a key factor in widening the cart size and average ticket size for ecommerce purchases from Tier 2/3/4 markets.

Even as their festive sales grow larger by the year, ecommerce platforms are being chased by D2C brands, Thrasio-like platforms, ecommerce roll-ups, house of brands and all manner of new models that are emerging in the Indian market.

Meat delivery startup Licious entered the unicorn club and became the first D2C startup to achieve this valuation this past week. Cofounder Vivek Gupta told us that what makes the D2C industry a real threat to ecommerce platforms is their sharp tech-led focus on problems in the value chain. Licious’ strength is supply chain, which is not possible at the horizontal scale that some of the ecommerce giants operate.

Bengaluru-based Thrasio-styled startup Mensa Brands has acquired a majority stake in 10 D2C brands within six months of launch. That isn’t the only example of the Thrasio model in India — FirstCry’s GlobalBees, GOAT Brand Labs, Evenflow, 10Club, Upscalio, and Powerhouse91 are others that are making waves. Both 10club and GlobalBees have acquired two D2C brands each in the last few weeks.

This buzz has prompted the original Thrasio to enter the Indian market with a $500 Mn warchest. It may make a foray with the acquisition of Delhi NCR-based home appliances startup Lifelong.

What’s curious is that D2C brands with their focus on polished branding and niche audiences have largely tapped the metro consumers, whereas ecommerce giants have moved on to Tier 2/3/4 zones.

This could very well see another transition over the next year as D2C brands and platforms continue their march.

Who knows, by next Diwali, one might even see the D2C segment controlling the mainstream ecommerce narrative and ecommerce platforms — bogged down by new competition, regulations and protests — might be pushed to the periphery.

No More Easy Road For Giants

While the fireworks are well and truly off for the ecommerce sector, there are also concerns about some damp squibs. Sales have come at a time when both Amazon and Flipkart are facing a fight from the government, investigative agencies and bodies such as CAIT

Amazon is embroiled in a bribery scandal, which the company denies despite facts showing otherwise. On the other hand, Flipkart is caught in an ED probe that could see a massive INR 10,600 Cr penalty for the company and nine other entities/individuals, including founders Sachin Bansal and Binny Bansal.

These two companies certainly don’t need legal distractions at a time when Reliance and Tata are breathing down their necks. Tata’s super app TataNeu is on track for a 2022 debut, whereas Reliance has made a major play in the food and grocery retail segment in the form of Texas-based convenience store chain 7-Eleven, which could fit into its plans for food delivery.

Moreover, the pressure from seller groups over the past few years and the constant calls for stricter regulations has resulted in the draft ecommerce rules which propose more transparency around discounts and look to clamp down on predatory pricing and exclusive sales on Amazon, Flipkart and other marketplaces.

The new rules are expected to be rolled out in the coming months, so the 2021 festive sales might well be the final time we see huge discounts on these major platforms.