Hyderabad and Pune saw a 329% and 653% year-on-year increase in funding, respectively, while Chennai saw a 473% YoY growth

The emerging star cities to watch out for include Ahmedabad, Jaipur, Patna and Kolkata

While 2021 was the year right after the onset of the Covid-19 pandemic, the startup ecosystem showed its tenacity by raising $42 Bn in funding during the year and creating 42 unicorns in the process.

And 2022 has been nothing short of a graduation exam for the startup ecosystem. As per Inc42 data, Indian startups raised more than $11.8 Bn across 506 funding deals in Q1 2022. Essentially, funding grew almost 186% and deal counts soared by a mammoth 64% in the first three months of 2022 as against the first quarter of 2021.

The smaller startup hubs emerged as the head turners of the ecosystem during the quarter by breaking at least some of the dominance of the top hubs like Bengaluru, Delhi NCR and Mumbai. 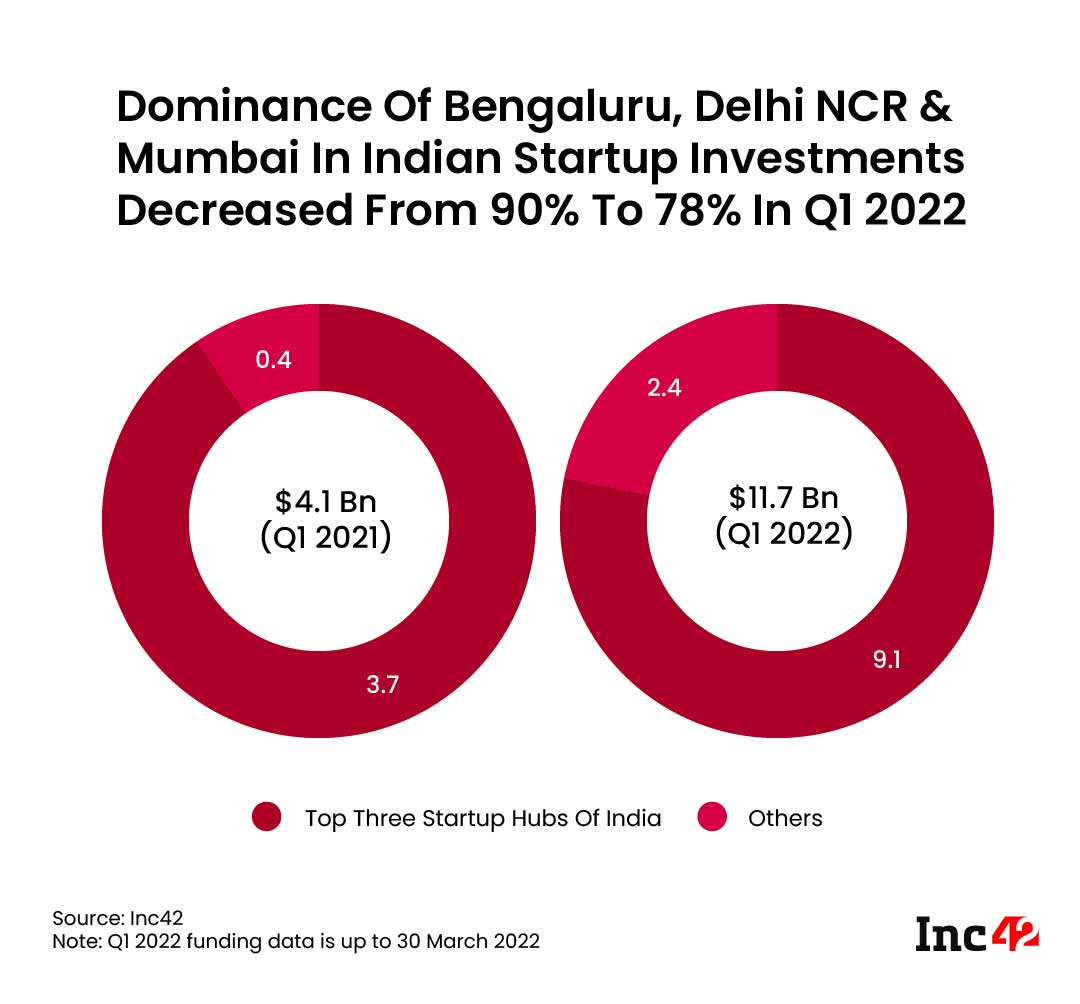 Hyderabad And Pune – The Rising Stars Of India’s Startup Ecosystem

Bengaluru held the crown of India’s rising Silicon Valley, yet again, with over $5.7 Bn being raised across 163 deals. Delhi NCR was at the second spot by bagging $1.9 Bn in funding across 123 deals, while startups in Mumbai accounted for 77 deals, taking their tally to $1.4 Bn. However, Hyderabad and Pune surprised the ecosystem with a 329% and 653% year-on-year (YoY) increase in deal count and funding amount, respectively.

Pune-based startups raised $788.7 Mn in total funding across six deals,  up from $90 Mn across 10 deals in the first quarter of CY21. The amount was largely led by Xpressbees’ and ElasticRun’s $300-Mn rounds each. The duo also crossed the $1 Bn valuation benchmark, taking the city’s contribution to the country’s close-to-a-century unicorn club to six.

Logistics startup Xpressbees raised $300 Mn in its Series F funding round from TPG Growth, ChrysCapital, Investcorp and Norwest Venture Partners, among others. Inc42 was the first to report ElasticRun’s $300 Mn Series E round led by SoftBank Vision Fund 2, Goldman Sachs Asset Management with participation from Chimera, Innoven and Prosus Ventures.

While Pune may have recorded only six funding rounds, a 40% decline from that in the corresponding quarter of the previous year, the city will soon see its first startup IPO. Pune-based FirstCry is set to go for an IPO in CY22 and will file its draft prospectus in April 2022.

The average funding ticket size of startups from Pune stood at $98.6 Mn, whereas the lowest ticket size was RocketAI’s $1.2 Mn seed round.

From Hyderabad, Smarton and Darwinbox raised the top two largest funding rounds during the quarter — a cumulative $272 Mn through rounds that happened on the same day.

While there have been calls to bring the startup ecosystem to Tier 2 and 3 cities, India’s startup ecosystem is most concentrated in the top three cities – Bengaluru, Delhi NCR and Mumbai – growing at an average of 127% YoY.

Beating the odds has been the south Indian city of Chennai. Startups from the city have raised $1.1 Bn across 26 deals,  a YoY increase of 473% and 271% in funding amount and deal count, respectively. Chennai is only fourth in the line after Bengaluru ($5.7 Bn), Delhi NCR ($1.9 Bn) and Mumbai ($1.4 Bn) in terms of funding raised. Chennai, during this quarter, saw the emergence of two unicorns – CredAvenue and Uniphore – after the two companies held two of the largest funding rounds in the capital of Tamil Nadu, taking the city’s unicorn count to five.

Conversational automation startup Uniphore became the eighth unicorn of 2022 after raising $400 Mn in funding at a valuation of $2.5 Bn in February 2022 from NEA, March Capital and others.

On the other hand, fintech startup CredAvenue joined the unicorn club after raising $137 Mn in its Series B funding round led by Insight Partners. Further, Chennai-based subscription management unicorn Chargebee announced the closure of a $250 Mn funding round led by Tiger Global and Sequoia Capital.

The minister also announced that the Tamil Nadu Industrial Development Corporation (TIDCO) would establish a state startup hub in Chennai for INR 75 Cr.

Calling for the startup ecosystem to spread beyond Tier 1 cities and reach the smaller towns and cities of the country, DPIIT secretary Anurag Jain had urged the ecosystem to incorporate Bharat in its growth story.

The next cities to watch out for, according to Inc42’s 2021 funding report, are Ahmedabad, Jaipur, Patna and Kolkata.