Green Mobility For Masses: The State Of EVs In Public Transport In India

The Delhi government has initiated the process of procuring 1,300 electric buses for mass transit

The Indian govt has approved buying of 5,500 electric buses for 64 cities, under FAME II

The road to electrification of public transport in India has just begun. According to market estimates, India has 1.7 Mn buses and about 70K to 80K are added in the market each year, of which 50% run between cities. But while passenger vehicles are seeing slow adoption in the electric vehicle space, the push from the government has also come for EVs in public transport besides personal and commercial usage.

With millions of Indians reliant on diesel-powered buses, vehicular pollution is a big reason for the push towards electric buses and shuttles. This year, several players such as Tata Motors, Ashok Leyland, BYD and JBM Group have shown eagerness to launch electric buses for battery-powered public transport in India. So how exactly are the state and central governments planning to bring EVs into the public transport fleet?

Speaking to Inc42, Jasmine Shah, the vice-chairperson of the state government-run Dialogue & Development Commission said that the Indian electric vehicle market is still in the niche stage. However, for this to change, there has to be a very close collaboration between manufacturers, operators and the government to be able to come up with interesting models and cost-effective solutions in the public transport domain.

“In Delhi, we are already setting up a trend in electrifying our public transportation system,” he added.

Delhi currently has an estimated 70K electric rickshaws today. The AAP-government believes that the new electric vehicle policy will further push the adoption of high-speed electric autos on the road multifold, thereby replacing the existing CNG autos completely. Today, most intra-neighbourhood and last-mile connectivity is facilitated by electric rickshaws. 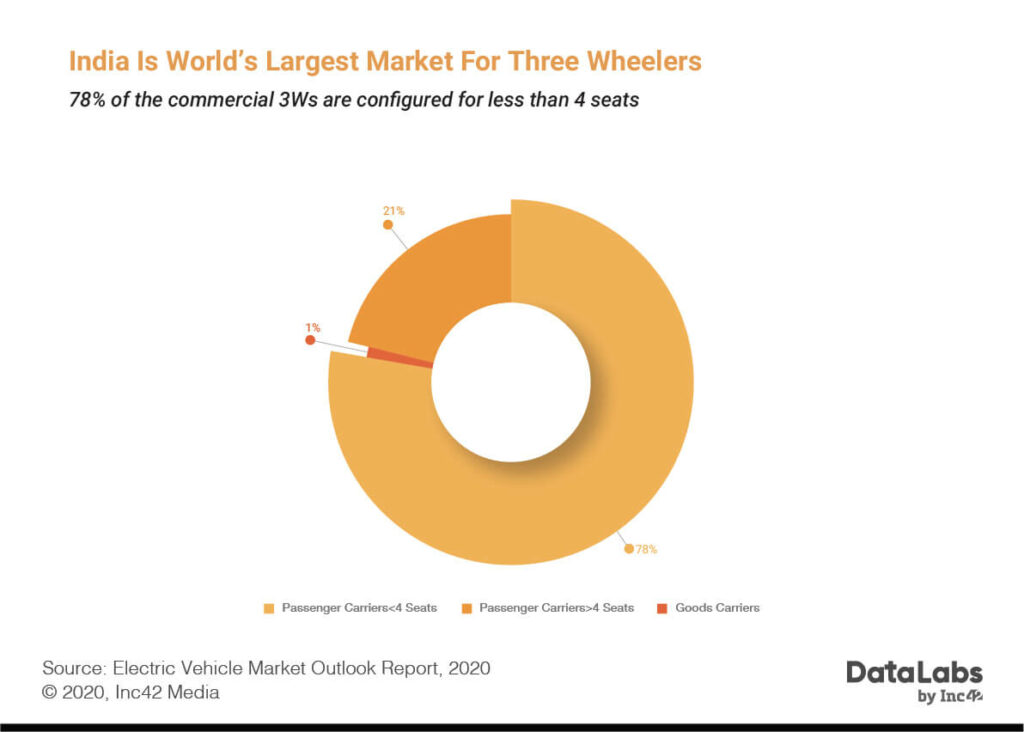 EVs in public transport are considerably easier to deploy for the government, given that it can focus on stationary electric vehicle charging infrastructure at bus stands and depots. Delhi has special tariff rates compared to the rest of the states in the country for charging of electric vehicles. For instance, most states charge between INR 8 and INR 10 per unit consumer, but in Delhi, this is as low as INR 4, which makes it more viable for individuals to install charging stations as well as the government to support charging infrastructure for public transport.

DDC Delhi’s Shah added, “In the last six months, we have initiated the process of procuring 1,300 electric buses, which is the largest such commitment made by any government so far. The proposal has been approved by the cabinet.”

He further said that over the course of 2020, we will see many of these buses on the roads of Delhi as the charging facility and power infrastructure are also underway, he added.

In December 2018, the Arvind Kejriwal-led state government ran a three-month pilot test to check the feasibility of electric buses on the road, where it collected data on routes, passengers and checked for energy efficiency and actual performance of the vehicle

“Overall, the response was positive. Everyone was happy, including the drivers, mechanics and operators. It is this effort which led the government to initiate the procurement of electric buses ahead,” Shah added.

On a central level, the government, under its Faster Adoption and Manufacturing of Electric Vehicles in India Phase II (FAME India Phase II) initiative has approved buying of 5,500 electric buses for 64 cities.

Vivek Chattopadhyay, senior manager for the clean air programme from the Centre for Science and Environment (CSE) said there’s no doubt that the government is doing their bit, but the progress is very slow, we need to set up a single department to monitor the entire development happening in the electric mobility space across India.

“It is different for each state and union territories  — different news, different policies, and different ways/methods of implementation. We need a single electric mobility task force here!”

In addition to this, multiple states like Bihar, Andhra Pradesh, Maharashtra & Karnataka, Chandigarh are also supporting electric vehicle infrastructure and charging stations are being set up in the respective states and union territories for public transport.

While the FAME II targets only major cities, the next phase will be for national highways and subsequently Tier 2 and Tier 3 cities. Under this programme, the government has installed over 450 EVZ chargers across India. In the coming days, EESL plans to set up an additional 1500 EV chargers by the end of this year, said Animesh Mishra, head of EESL.

“While the uptake of electric vehicles will be gradual, the charging infrastructure needs to be in place to enable electric mobility in the country. Estimated potential of electric cars, bikes and rickshaws India by 2030 will be 79 Mn and 8 Mn public chargers by 2030, including both slow (AC) as well as fast (DC) chargers,” he added. 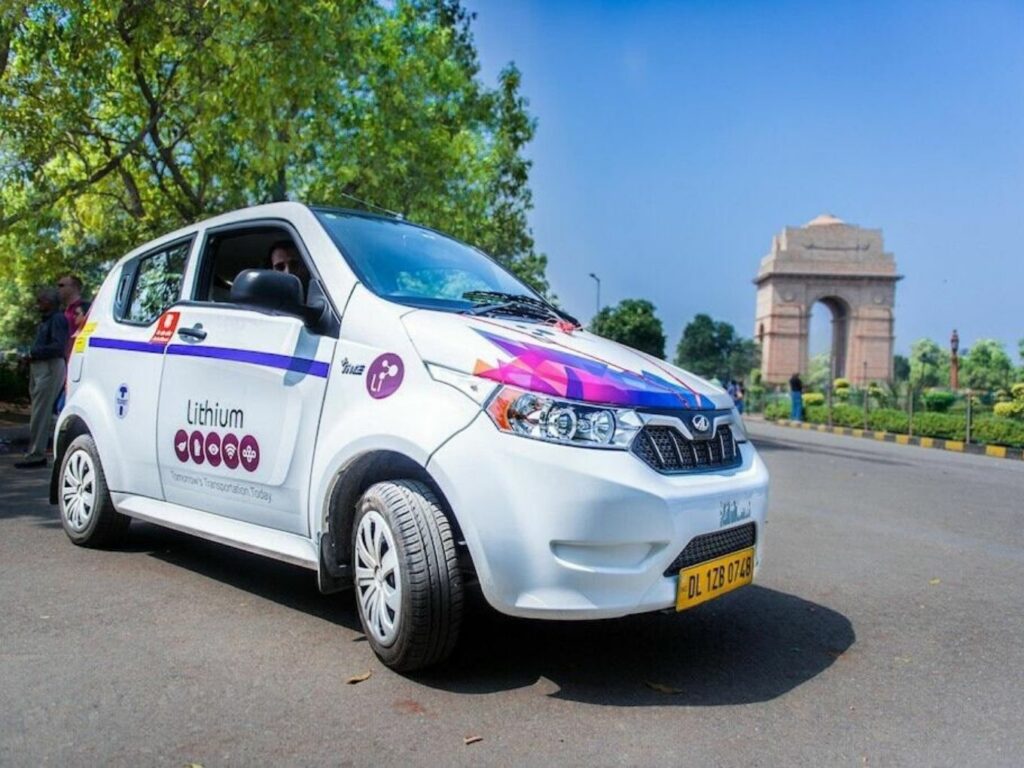 Is The Future Of Public Transport Private?

In the B2B segment, Bengaluru-based startup Lithium Urban is working towards electrifying public transport. Founder Sanjay Krishnan told Inc42 that the market size is estimated to be $4 Bn and there are already millions of vehicle catering in this segment across India, particularly in Tier 1 and Tier 2 cities. Lithium Urban Technologies claims to have over 1500 electric vehicles catering to the corporate community across nine cities in India.  “We are not just catering electric vehicles or providing charging infrastructure at a lower cost and reducing the carbon footprint, but are leveraging technology to solve the mundane problems in traffic and urban commute.”

Interestingly, the company has an occupancy rate of 85 to 90%. In other words, every time a Lithium Urban Technologies’ electric vehicle is travelling within the city, it will have a minimum of 3 to 4 passengers on board at all times.

Looking at the way India is heading towards electrifying mobility — the majority of the share in the electric vehicle market is led by three-wheelers and two-wheelers, with cars occupying just 10% of the market in the passenger vehicle segment.

“As far as the four-wheelers are concerned, both private and public sectors are playing a magnificent role. The future of public transport will go the private way,” said Krishnan.

He further said that if one looks at the long-term impact, there is enough capital available in the market, both in terms of equity and debt for a lot of private players to make use of the opportunity within public transport.

“The government, both at centre and state level have done a pretty great job by giving the industry an initial push with its electric vehicle policies and initiatives. Now is the right time for private players to step up the game and electrify urban mobility in India like never before,” he added.

Recalling the initial days at Lithium Urban, Krishnan said that India had a dearth of electric vehicles at one time, with only one model available for many years. Today, the situation has changed as five to ten variants of electric vehicles across categories, be it two-wheeler, three-wheeler or four-wheeler or even heavy vehicles are available. “As more and more OEMs launch newer models of vehicles, newer technologies of batteries are being made and charging infrastructure is being set up, I am confident about India’s journey towards electrifying mobility.”