Though the battery-swapping policy decision has been broadly welcomed, the industry is awaiting the nuances in the policy

Other demands, particularly expectations with regard to FAME incentives and GST reduction were not met in the budget

Finance minister Nirmala Sitharaman’s announcement that the government will come up with a battery-swapping policy and interoperability standards come as an encouraging factor for the EV industry which otherwise found not much to cheer in the budget.

While the battery-swapping policy found favour with the finance minister, other demands, particularly expectations with regard to Faster Adoption and Manufacturing of Hybrid & Electric Vehicles (FAME) incentives and GST reduction were not met in the budget.

“Considering the constraint of space in urban areas for setting up charging stations at scale, a battery swapping policy will be brought out and interoperability standards will be formulated. The private sector will be encouraged to develop sustainable and innovative business models for battery or energy-as-a-service. This will improve efficiency in the EV ecosystem,” the finance minister said in her budget speech.

Besides, according to experts, fixed batteries do not really work except through home charging because of the load it will exert on the grid and the time it takes. Convenience especially for last-mile operators, gig economy players and others is a big factor too.

“Most of the two-wheelers now being sold are high-speed vehicles which require or are dependent on swapping the battery. The architecture, usability and consumer preference are moving towards swapping. Then there is the B2B sector and delivery companies. People need things to come quickly and the only solution is battery swapping,” said Ankit Kumar, an investor and entrepreneur in the EV and drone space.

Startups have been pioneers in setting up battery-swapping infrastructure as countries increasingly adopt EVs. While China with low-cost batteries leads the battery-swapping market, Southeast Asia’s Indonesia and Cambodia have also experimented with the idea. In Europe too, the idea is taking roots as startups as well as large companies are inking pacts to set up battery-swapping facilities. US EV giant Tesla, however, has not been too receptive to this idea and continues to use fixed batteries.

In India, a handful of companies, including startups, that provide batter-as-a-service offerings have emerged. Honda has set up a battery-swapping and sharing service in India. Among the OEMs, Ashok Leyland is firming up plans to introduce battery swapping in electric buses. Twenty Two Motors has tied up with Taiwanese Kwang Yang Motor Company for a battery-swapping solution, among other things. Revolt Motors is another company whose e-bikes have batteries that can be swapped.

Battery-swapping– A Few Hurdles Ahead

Chetain Maini, cofounder of EV startup Sun Mobility, tweeted that it would be great if the government addressed other key points around subsidies for consumers and businesses, range criteria, as swappable batteries are typically smaller and offer a low range and GST for swapping services. 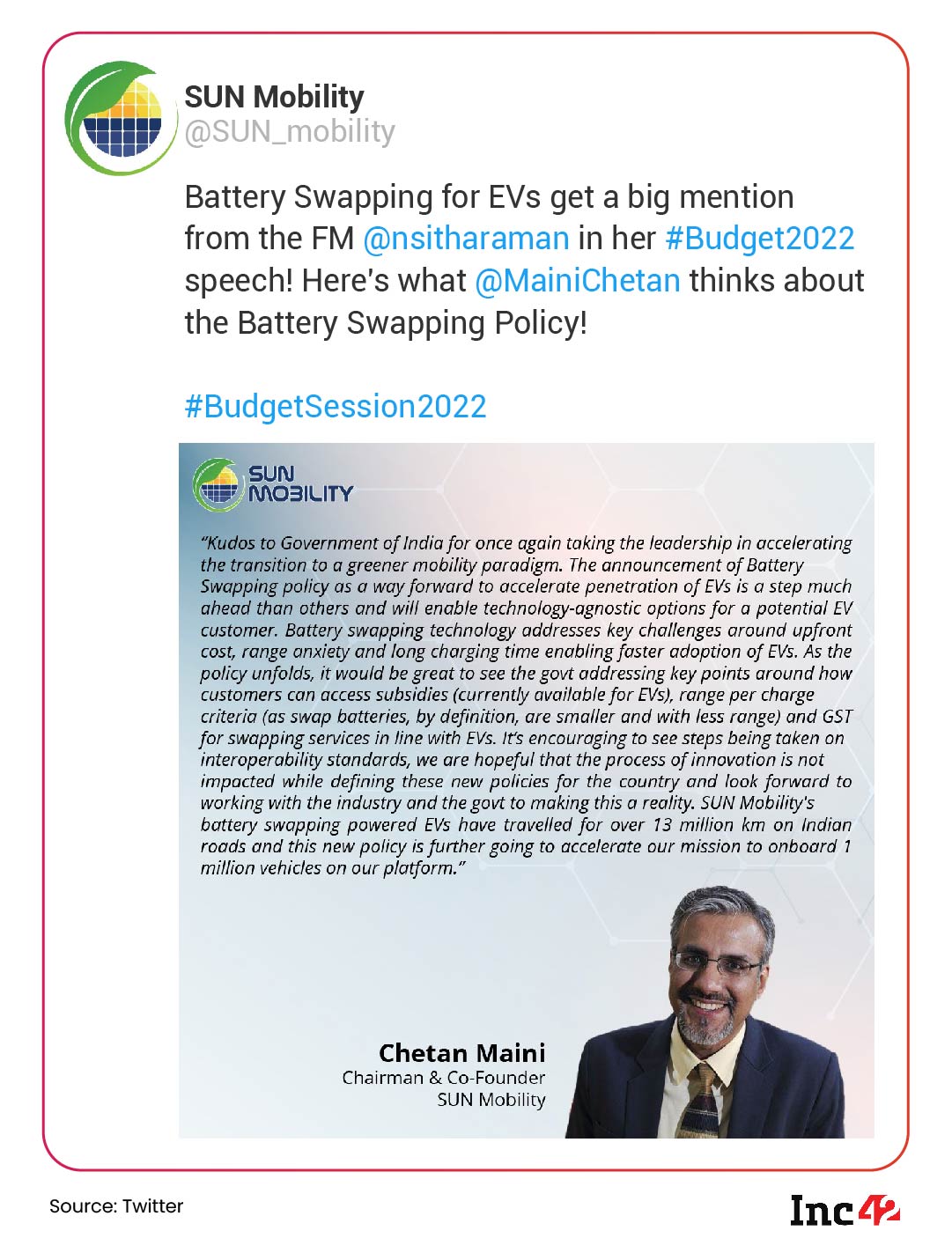 Others called for standardisation in battery quality. For instance, Sambit Chakraborty, who is on the advisory board for infrastructure player Indigrid Technology, expressed apprehensions about the proliferation of low-quality, “cheap” Chinese batteries.

“If the policy can build in a structure to raise the safety and the Made-in-India aspects, that will be a boon for India in the long run. There are many Indian manufacturers of safe batteries and swap stations who would then not have to choose to lower quality and safety standards,” he added.

A major concern around battery swapping is the high capex involved in setting up swap stations where batteries need to be kept charged and ready for drivers and riders. Such investment calls for incentives, according to entrepreneurs we spoke to.

As in the case of charging stations, there need to be lower rentals and subsidies for swap stations. He also pointed out that charging and swapping should be developed simultaneously to boost the adoption of all kinds of EVs. Startups and large companies have already been eyeing the battery-swapping space.

Reliance BP Mobility Limited or Jio-BP and the Mahindra Group have formed a joint venture for battery-swapping in India.

Expectations of EV Players That Remain On Paper Only

Of course, in the run-up to the budget, the EV ecosystem had plenty of other demands from the government that were neglected by Sitharaman. Akash Gupta, cofounder and CEO of Zypp Electric, believes there’s a lot of confusion even for swapping companies, which has dampened EV adoption.

“I would have loved it if GST on battery and spare parts had also been reduced to 5% like it’s there for electric vehicles purchases; this would also help the entire electric vehicle ecosystem,” he said.

Further, a holistic approach is needed to ensure a robust network of swappable packs and swap stations so that it merges seamlessly with the existing consumer behaviour around refuelling vehicles.

More adaptable FAME-II norms were another demand that has been ignored in the budget. Coupled with production-linked incentives (PLI), this would have helped the industry invest in EV infrastructure

The EV industry had also hoped that the budget would cut import duty on raw materials. PLI on the lines of automobile or semiconductor manufacturing would have boosted the localisation efforts of EV players. Original equipment manufacturers are at present struggling under the present inverted duty structure.

The EV players had also demanded low-cost finance options for smoother adoption of electric vehicles and placing EV financing under priority sector lending. This would have gone a long way for EV adoption

The long list of expectations and demands also included government support for R&D in affordable and indigenous battery technology development, the biggest pain point for EV players. Dependence on lithium imports from China is considered a strategic disadvantage for Indian EV manufacturers.