The Cost Of Going Green: Can India Cross The Affordability Hurdle For EVs?

The Cost Of Going Green: Can India Cross The Affordability Hurdle For EVs? 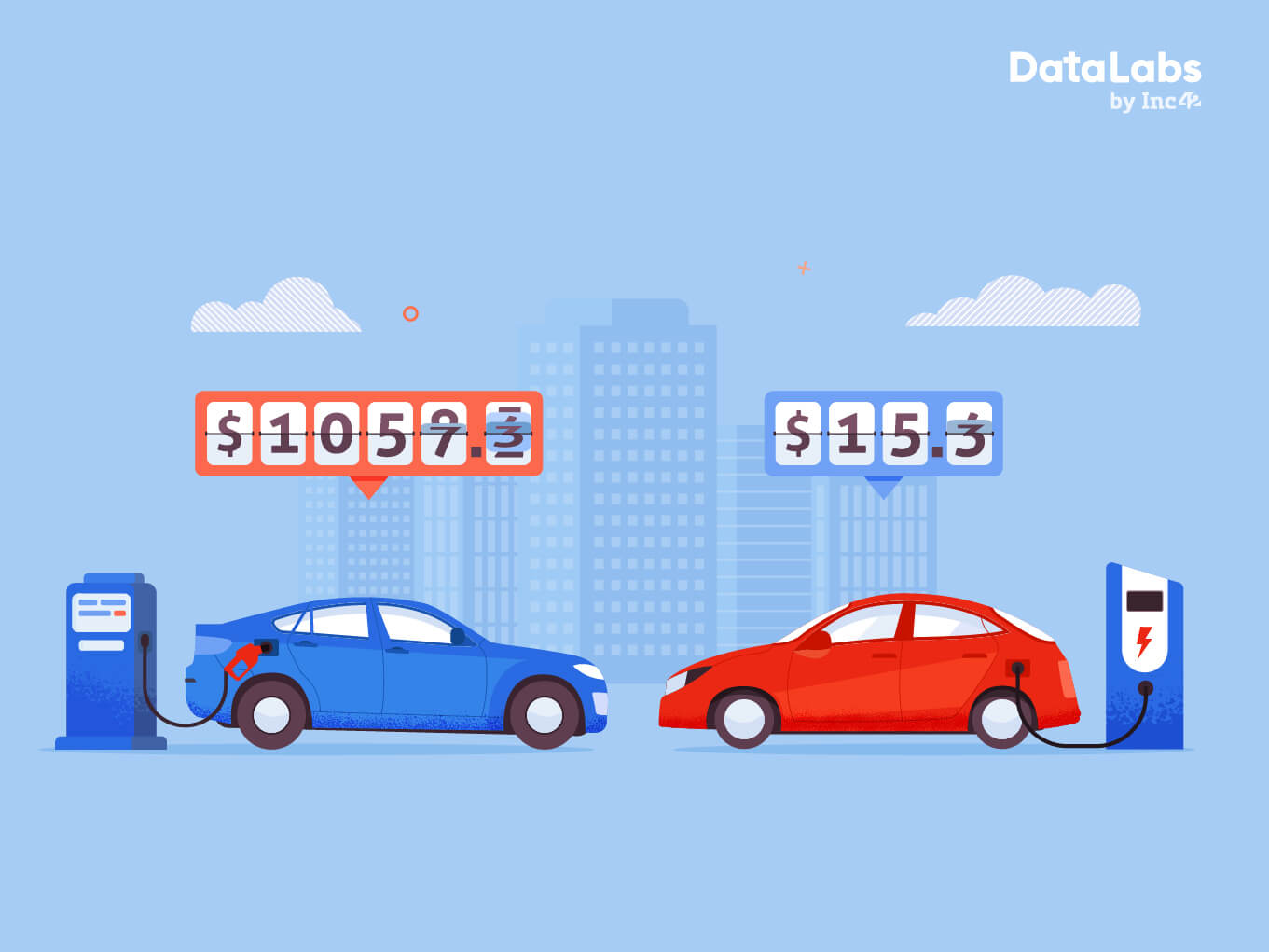 The automotive industry in India is at the cusp of a great transition. The transition from internal combustion engine (ICE) vehicles to electric vehicles (EVs) is crucial from the point of view of sustainability and clean energy.

Niti Aayog estimates say the EVs might end up saving up to 64% of India’s energy costs for road transport and cut down on up to 37% of carbon emissions. The Indian government has already chalked down its vision with a target of 30% electric vehicles on the road by 2025. But to get there, the biggest hurdle for Indian EV manufacturers and the mobility ecosystem is the affordability of electric vehicles.

As per DataLabs by Inc42’s latest report Electric Vehicle Market Outlook Report 2020, cost of the vehicle is a major deterrent for consumers when it comes to EVs. The average cost of an electric car in India is nearly 3X that of comparable petrol or diesel-run cars. The problem can be tackled in two ways — by boosting manufacturing and decreasing the procurement cost of EV components or by providing incentives to the buyers of EV so that the overall cost of ownership becomes lower.

While the first of those two solutions is a long-term one, one cannot deny that battery cost is the major factor in the high on-road price of EVs. That’s why the primary focus of the ecosystem has to be on increasing the manufacturing capacity and capability with respect to EV batteries as well as adopting models that rely on swapping rather than charging.

Despite concerns about range anxiety, the cost is still the biggest hurdle when it comes to adoption. 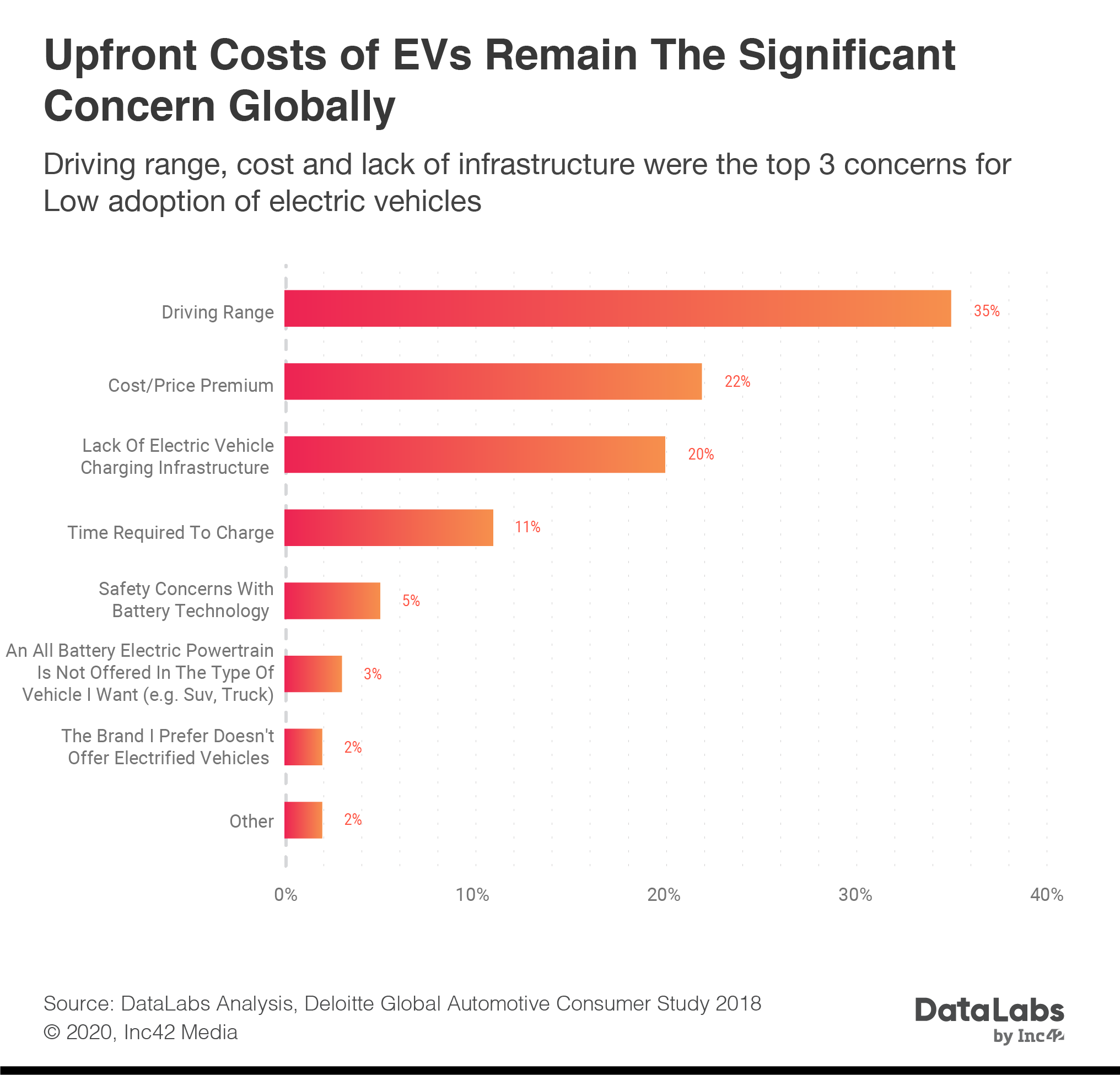 Cost is not just holding consumers back but manufacturers too. Maruti Suzuki India, for instance, finds the cost of EVs to be prohibitive for widespread adoption and Mahindra, MG Motor and Hyundai are also looking to launch affordable EVs in the near future. besides charging infrastructure.

The truth is that most Indians cannot afford an electric car like Hyundai Kona which costs INR 23 Lakh, or even an INR 9 Lakh electric four-wheeler such as the Mahindra eVerito, because the cost is twice as much as a comparable car without an electric drivetrain. Unless manufacturers look to boost the affordability quotient of electric cars, EVs  are likely to remain niche offerings. For mass adoption of electric vehicles, the affordability concern needs to be tackled soon especially in India, where the per capita income of $7,680 is 31% lower than China, one of the biggest EV markets in the world. 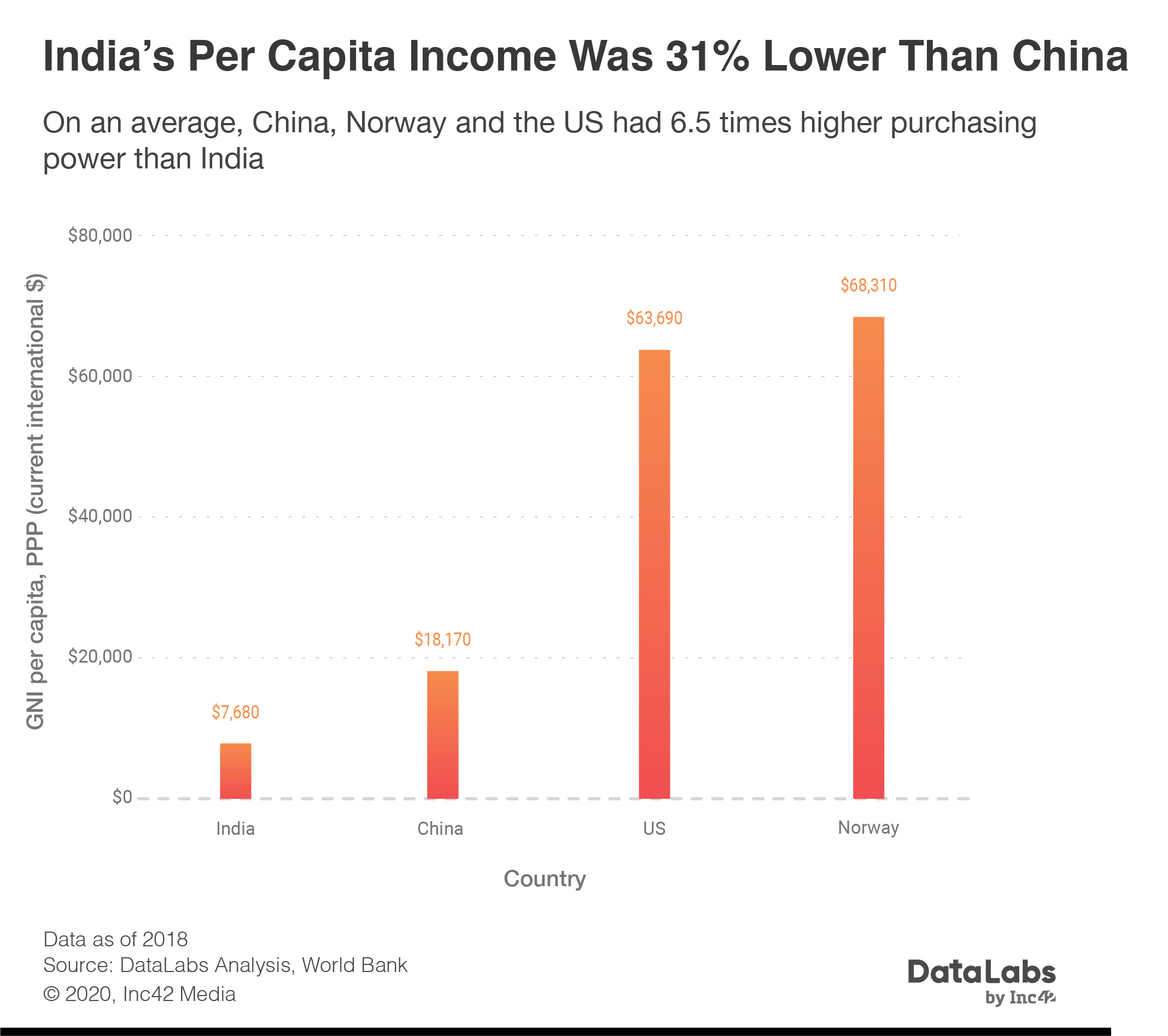 Getting To The Next Battery Breakthrough

The high price of electric vehicles is down to the cost of making the battery. Since batteries involve mined elements and raw materials, the cost of procuring these is high, plus the manufacturing process is expensive as well, requiring specialised facilities such as dry rooms. Given all this, the battery accounts for 40% – 50% of the total cost of manufacturing an electric vehicle.

In India, most manufacturers rely on batteries imported from China, South Korea, Japan and Europe. Since battery cell manufacturing is still a developing segment in India, the current situation poses the risk of increasing the country’s trade deficit.

Whether through government subsidies or a push for manufacturing, the Indian market needs big encouragement for indigenous battery production for solid-state and fuel cell batteries from a strategic and economic standpoint. There is also a high growth opportunity for Indian battery players to explore this segment due to the presence of a handful of competitors and a bright future for the EV market. Since 2010, the BNEF study has been tracking lithium-ion battery rates and reveals that between 2010 and 2018, the average weighted battery packs costs have plummeted by around 85%. Prices have dropped to $176 per kWh from an average of $1,160 per kWh in 2010.

Rolling out charging stations at a near stretch can result in solving the concern for smaller batteries. The smaller batteries can eventually lower costs by reducing the total weight of the vehicle, resulting in higher energy-efficiency and improved ability to upgrade as the technology evolves.

The Indian government is already on track to provide the required infrastructure across the country as it approves setting up 2,636 (1,633 fast and 1,003 slow) electric vehicle charging stations across 62 cities in 24 states and union territories of India under the second phase of FAME India scheme.

India is already making battery packs (cell to pack) and needs to encourage country production for manufacturing of battery cells, as per NITI aayog.

The think tank also suggests that the country should also focus on materials which are used in batteries like lithium, manganese, nickel, cobalt and graphite to determine its costs. Apart from securing mines which produce these materials. India also needs to obtain such battery materials by recycling the used batteries.

By addressing the cost issues of batteries, in the not-so-distant future, there might come a stage when running an electric car would actually be more sensible economically than ICE vehicles.

Government Support Is The Biggest Crutch For The EV Ecosystem

The Indian government in a bid to provide financial support is backing the acceleration towards electric vehicles through various policies. Due to the rising cost of EVs, the government is providing its support in many ways such as demand incentives and tax exemptions. As per the budget last year, there was a major reduction in goods and services tax rate on electric vehicles from 12% down to just 5%.

Moreover, the government also reduced the taxes on EV chargers to 5% from 18%. On the other hand, to discourage the ICE vehicles, the GST rate for petrol and diesel cars and hybrid vehicles is already set at the highest bracket.

As per NITI aayog, India’s current structure of providing demand incentives might not be a viable option in the long term. The think tank in its EV report suggests that the direct financial demand incentives could be replaced by Tradable Auto-Emission Coupons or credits based on CO2 emissions per km as well as on a sliding scale for vehicle efficiency which will further encourage the market to produce vehicles with lower emissions per km.

The government in the recent development is trying to push the local manufacturing by implementing high custom duties on import of EVs. These steps would help to promote the manufacturing of electric vehicles in India and this is a right step in that direction. As a result, India will reduce its dependence on other countries by developing certain segments.

Going further, if the upfront cost of the electric vehicles goes down, the mass adoption of EVs can be expected to rise rapidly. Furthermore, the benefits of long term operational costs can be highlighted to boost the adoption rate. As consumers still choose economical and operational benefits over environmental responsibility when making the decision to buy vehicles. 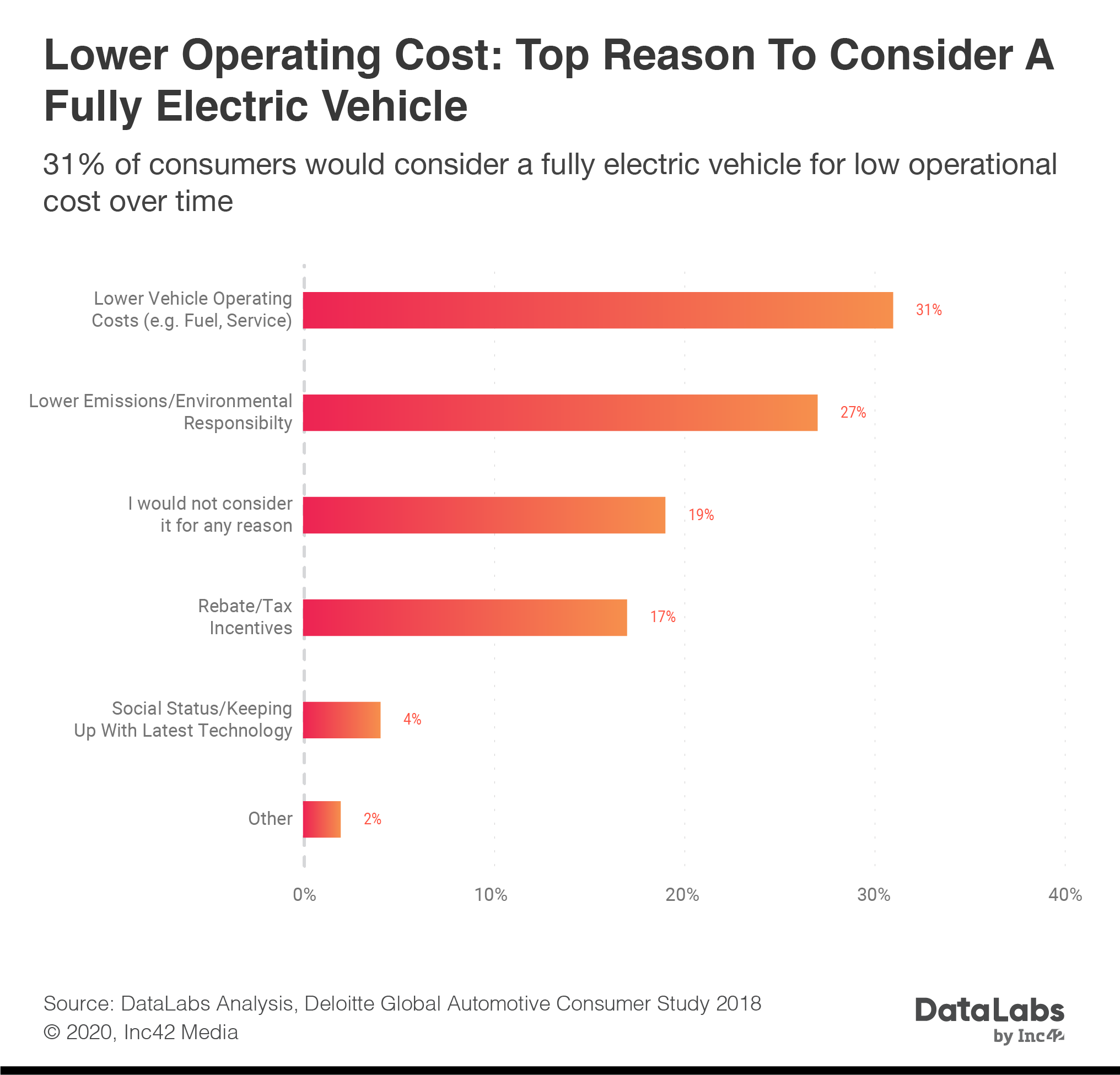 It is high time that India expedites the availability of the required network infrastructure as well as technically superior, domestically manufactured chargers and components to minimize costs and expand the choices for consumers. With the help of robust infrastructure and government support, the total cost of ownership can be reduced and brought on par with regular cars and that’s the biggest push that electric vehicles can hope to get in the price-sensitive Indian market.