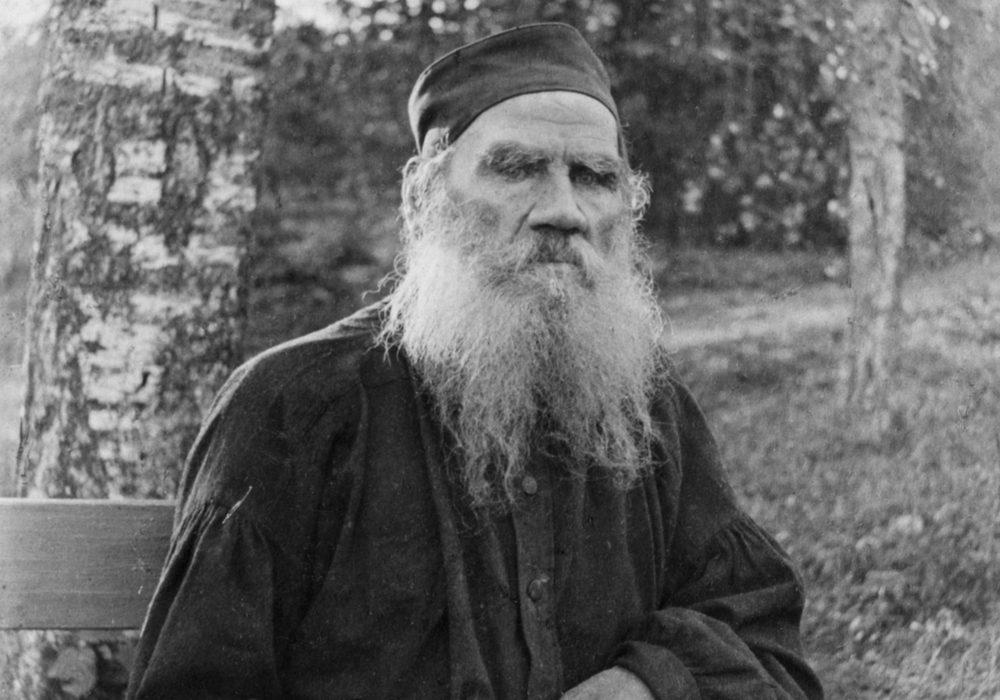 He became friends with Gandhi, was deeply depressed, dropped out of university, and left his family in the middle of the night.

World renowned Russian author Leo Tolstoy led a troubled existence struggling with his own identity. At the height of his fame and wealth, he yearned for the simple life in which neighbours help and love each other.

That dream of utopia would elude him – but today, when chaos reigns supreme – the “less is more” philosophy of Leo Tolstoy is urgently needed, in business and in life.

“A quiet secluded life in the country with the possibility of being useful to people – nature, books, music, love for one’s neighbor – such is my idea of happiness.”

Like many of us today, Tolstoy had a lot happening. He wrote the classic “War and Peace,” an international best seller. Despite his success, Tolstoy believed life was best when it was uncomplicated. Much to the horror of his wife and family, he concluded that all his worldly possessions were meaningless, to be discarded, and that the only thing which really counted was helping others. Today, many who reach a pinnacle of success ask “Is this all there is?” Something is missing. Simplicity. And its peaceful joy. 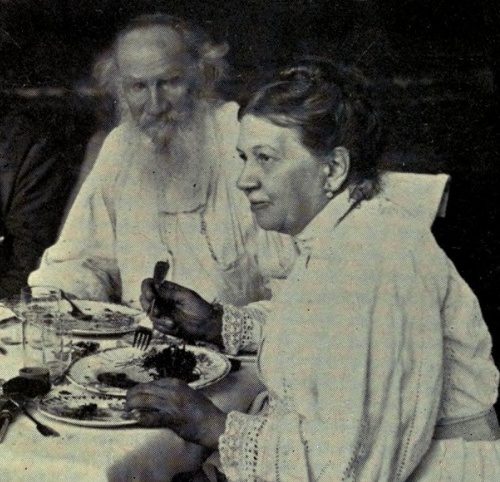 At a 1905 family dinner, Tolstoy stares unlovingly at his wife.

Tolstoy wanted to rid himself of material things, even his property – but his wife would have none of it. He met his wife Sophia when she was only 18, he 34. On the eve of their wedding, Tolstoy bizarrely showed his diaries to his bride which detailed his relations with numerous women. As of that day, she was deeply worried he would again seek the company of other women. But Sophia was a strong woman who took up photography and like Tolstoy, she could write.

“This is the second day when I have been indolent and failed to carry out all that I had set for myself.”

Many of us have become “busy” addicts. Tolstoy was that too – for a while. He then discovered that “busyness” was code for poor management skills, and that down time had benefit. “Busy” for the sake of being busy, carries no value. Quiet time gives us badly needed perspective, reflection, and inner peace. Not to mention more time with family and friends. Today’s badge of importance – “busyness” – will become tomorrow’s object of scorn.

“It’s all an illusion, everything except that infinite sky. There’s nothing but stillness and peace.”

Tolstoy, who was known to suffer from panic attacks, became increasingly disenchanted with society. The difficulties of life – keeping up with the Joneses – often made him frustrated and deflated. To escape, he disclosed in his diary that he looked to nature. Staring at the sky, gazing at treetops and listening to the wind, created the balance he so desperately sought.

Tolstoy gained attention, not only from his writings, but his outspoken views – one of which was bringing about change through non-violent means. It was a position he adopted after witnessing a public execution, a traumatic event that scarred him for life.

Tolstoy’s advocacy for non-violence was adopted by Gandhi who looked up to Tolstoy and created a co-operative in South Africa named after him. (Martin Luther King was also a Tolstoy follower). 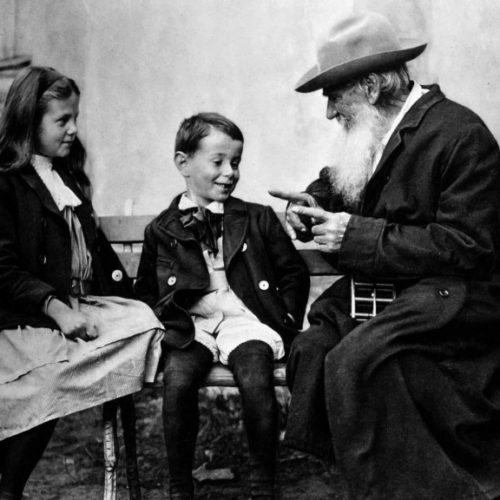 Leo Tolstoy enjoyed his grandchildren – part of his dedication to a simpler life. Little did Tolstoy know at the time, he would be dead just a few months after this remarkable photo was taken.

As he aged, Leo Tolstoy viewed organised religion as corrupt, saying it had nothing to do with the teachings of Christ. The Russian Orthodox Church didn’t like that opinion so it excommunicated him. But Tolstoy didn’t care. In fact, he didn’t care what other people thought about him.

The defiant Tolstoy, who wanted to work for the government in his youth, also had harsh words for the ruling regime, which put him under surveillance.

Eventually, Tolstoy would rebel against all powerful institutions in society – accusing them of greed and self-interest. He questioned the meaning of life and fell into a deep morass.

His wealth and critical acclaim meant nothing to him. He went as far as to say he was just going to die anyway so what was the point?

Tolstoy, who considered suicide, decided life was only worth living if he could live a simple life in the country and help the poor. Fed up of life in the fast lane, he concocted a plan to leave his affluent existence.

Angry, sick and woefully unhappy – at age 82 – the great man, admired by millions, left his wife and home in the middle of the night.

Tolstoy didn’t get far. He was found at a nearby railway station, confronted by a news crew, large crowd and his bewildered wife.

Just prior to being discovered, passengers on the train with Tolstoy reported that he talked about the importance of love, the sharing of wealth, and non-violence.

Tolstoy chose not to return home. He quickly developed pneumonia and died in 1910, never to fulfill his dream of a humble life of service to others.

But Leo Tolstoy was on to something, teaching us that in all aspects of our career and life – less can be more.

Leo Tolstoy’s masterpiece, War and Peace, was ranked by Time magazine as one of the greatest stories ever written, along with another of Tolstoy’s famous works – Anna Karenina. Eerily, Tolstoy spoke about dying just days before he passed. It’s believed his escape in the middle of the night was to leave his troubled marriage, as much as it was to pursue his dream of simplicity. Born into an aristocratic family, Leo Tolstoy knew people would never remember him for what he owned, but rather, for what he did.

Cory Galbraith is the President of Galbraith Communications, an international IT company specializing in online streaming.