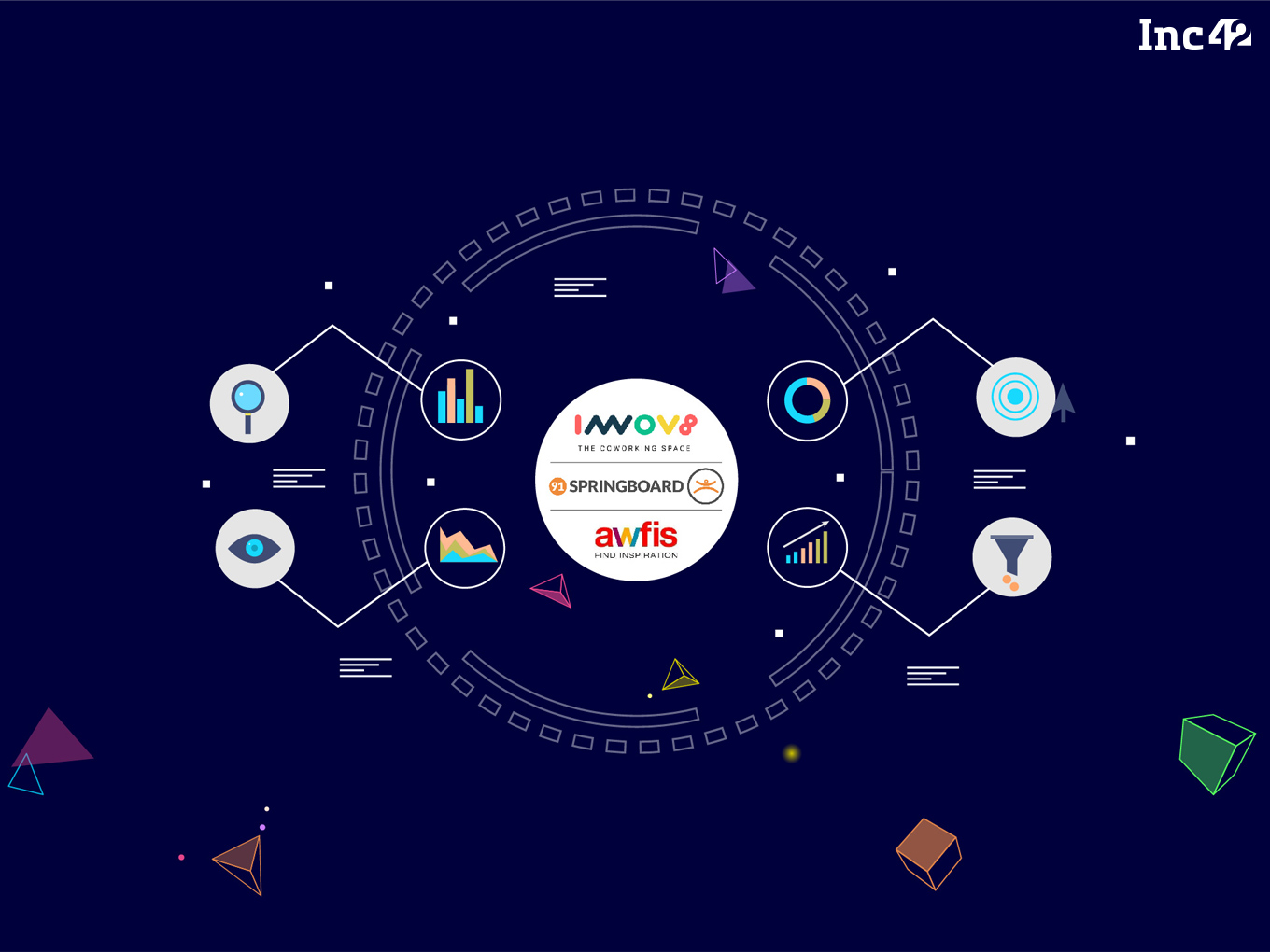 Our analysis of the P&L statements of Awfis, Innov8, and 91springboard revealed that all three are operating under losses

We’re talking about real-life offices here — yes, here in India. Thanks to coworking spaces such as WeWork, Awfis, Innov8, 91springboard etc, offices such as these are no longer the privilege of those working with deep-pocketed companies such as Flipkart, Snapdeal, DBS Bank, among others. They’ve becoming accessible — without the burden of ownership — to the more-than 20K startups that bolster India’s claim to the third place in the global startup ecosystem.

The number of tech startups in India is expected to double by 2020, employing over 2 Lakh people. Not many startups can afford fancy offices, or even an office at all. There are also increasing numbers of SMEs and freelancers across the country looking for shared workspaces with world-class amenities.

Given today’s rising real estate prices, coworking spaces are increasingly carving a space for themselves in India, and offer more than just ‘space’ to their clients.

Coworking spaces are fully managed office spaces at premium locations, equipped with high-tech infrastructure and a variety of value-added services such as concierge, IT, legal, accounts, and exclusive deals from partnerships.

Of more than 200 coworking spaces in India at present, the three rising stars are Awfis, Innov8, and 91springboard. Awfis recently raised a $20 Mn in funding, while Innov8 has already organised more than 500 member-centred events in its short journey of three years. 91springboard, the oldest of the trio, recently inaugurated its 17th facility in the country and is on the road to add four more soon.

Here’s a quick overview of these three coworking startups.

The key factors driving the adoption of coworking spaces in India are the lower cost, good infrastructure, and networking opportunities they offer. Coworking spaces are being availed of not only by startups but also by professional freelancers, emerging businesses, and large corporates.

But are coworking spaces startups themselves in a position to survive for long? This is what we have attempted to analyse in Inc42’s ongoing What The Financials [WTF] series this week.

Note: As the FY18 financial reports for the companies are not out yet, the analysis is based mostly on FY16 and FY17 data available in the RoC company filings.

In FY17, Awfis reported a massive revenue growth of 1583%, raking in INR 18.2 Cr as compared to INR 1.08 Cr in FY16. Awfis saw the highest growth in revenue among the trio, overtaking 91springboard and Innov8.

The key driver of the superlative growth of Awfis and 91springboard is their technology led working model as well as their focus on establishing themselves more as enterprise-focused facilities rather than startup workspaces.

According to a February 2018 ET report, startups form only 15% of the clientele for Awfis, with the rest comprising large companies such as Vodafone, Mercedes Benz, and Orange Business Services as well as SMEs such as ReNew Power and Incred Technologies.

While the overall revenue growth was similar for both Awfis and 91springboard, there were substantial differences between their operating and non-operating revenues. In FY17, Awfis’ operating income was 99.6% of its total income, while for 91springboard, it was just 60%.

With non-operating income being a major revenue source for 91springboard, it is evident that the company is majorly dependent on non-recurring sources of income and not on its core operations. Thus, it is difficult to assess the long-term growth of 91springboard.

Awfis, on the other hand, is flying high on account of its core business, which is growing fast and may place the company at the forefront of the Indian coworking space.

Expenses Rise For All Three Companies

Awfis has done well on the expenses count. The company has been able to reduce its overall expenses in FY17, recording a 388% increase from the previous financial year. This is much less compared to the 5848% rise in expenses it saw in FY16 as compared to FY15.

Advertising expenses for Awfis were quite high compared to the other two in FY17. However, this could be attributed to the accelerated growth Awfis has seen in FY16 to FY17. The company’s total advertising expenses in FY17 was INR 2.08 Cr, a 1042% increase over its ad spend of INR 18.2 Lakh in FY16. On the other hand, 91springboard and Innov8 spent just INR 95.36 Lakh and INR 54.5 Lakh on marketing and advertising in FY17.

These numbers also indicate that competition in the coworking space is getting intense, with a number of coworking spaces mushrooming in India. This is compelling coworking companies to spend a large part of their budget on their marketing and advertising activities.

P&L Of Trio Nothing To Write Home About, But Awfis Leads Coworking Space

Our analysis of the P&L statements of Awfis, Innov8, and 91springboard revealed that all three companies are operating under losses. However, based on the overall analysis, we can say Awfis is emerging as the top contender in the Indian coworking industry.

For Innov8, FY17 losses increased by 15660%, depicting that the company is still in the growth phase and needs to find ways of generating more revenues and curbing its expenses at the same time.

91springboard, although in the game for six years now, is facing stiff competition from new players in the space. In FY17, the company registered a 762% growth in losses amounting to INR 10.09 Cr, compared to INR 1.17 Cr in FY16.

Thus, Innov8 has a long way to go while Awfis and 91springboard are competing neck and neck.

Apart from numbers, the good news is that the coworking revolution is only getting stronger in India, riding on the back of its “community” and networking edge, and is far from saturation.

According to a study by real estate consultancy Jones Lang LaSalle (JLL) and shared workspaces provider WeWork, the coworking industry in India will likely attract more than $400 Mn investments by 2018.

And as the author of the book ‘Comeback America’ David Walker aptly said, “Coworking space is a container, it holds this potential energy, and all participants create energy together, a community manager needs to facilitate this energy.”

Well, coworking spaces such as Awfis, 91springboard, WeWork, Innov8, and Instaoffice, among others, are right on track here!