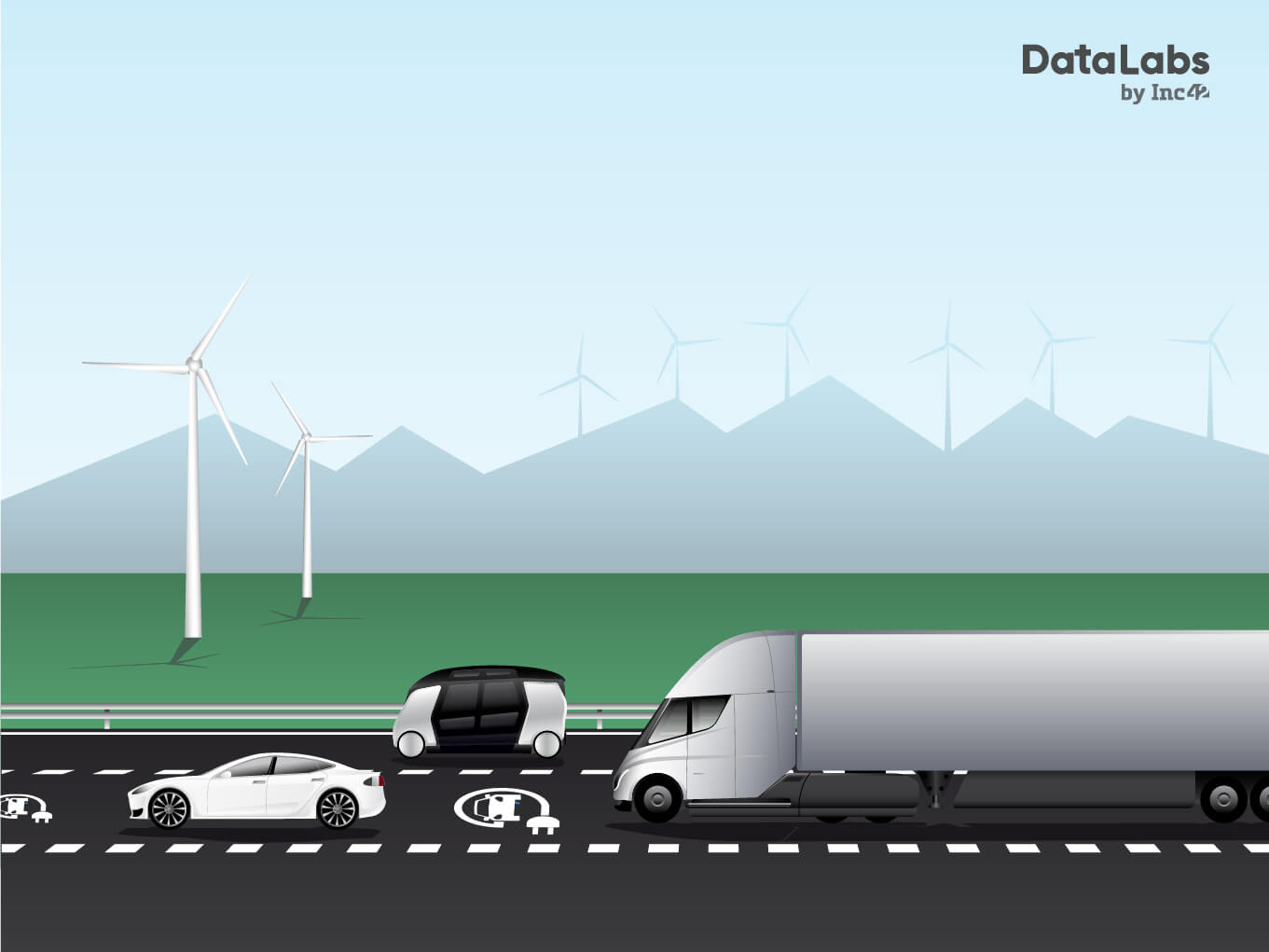 In FY19, commercial vehicles recorded the fastest pace of growth in domestic sales at 17.55%

Even as India hurtles towards green mobility with mega targets for electric vehicles on the road by 2030, electrification of public transport and such, the big question is will India’s businesses and commercial enterprises also back electric mobility.

Currently, India holds a share of less than 0.5% in the global electric vehicle market, but that current infrastructure and mode of transportation is set to change dramatically in the coming years. Preparing for a green future and in a bid to reduce reliance on imported crude, the government of India is backing the acceleration towards electric vehicles through policy, but while the primary focus of this transition is on two and three-wheelers and passenger cars but also on commercial vehicles. Currently, commercial vehicles and passenger vehicles together hold just 0.5% share in the total sales of electric vehicles. So what exactly has held back the segment within the electric mobility ecosystem so far and does this class have a bright future in India.

Low maintenance cost, corporate sustainability and operational benefits are some of the factors encouraging the adoption of electric vehicles for commercial use, For passenger vehicles, there is still a long way to go as customers are concerned about the lack of charging stations, high cost of ownership and few choices in terms of models or SKUs. 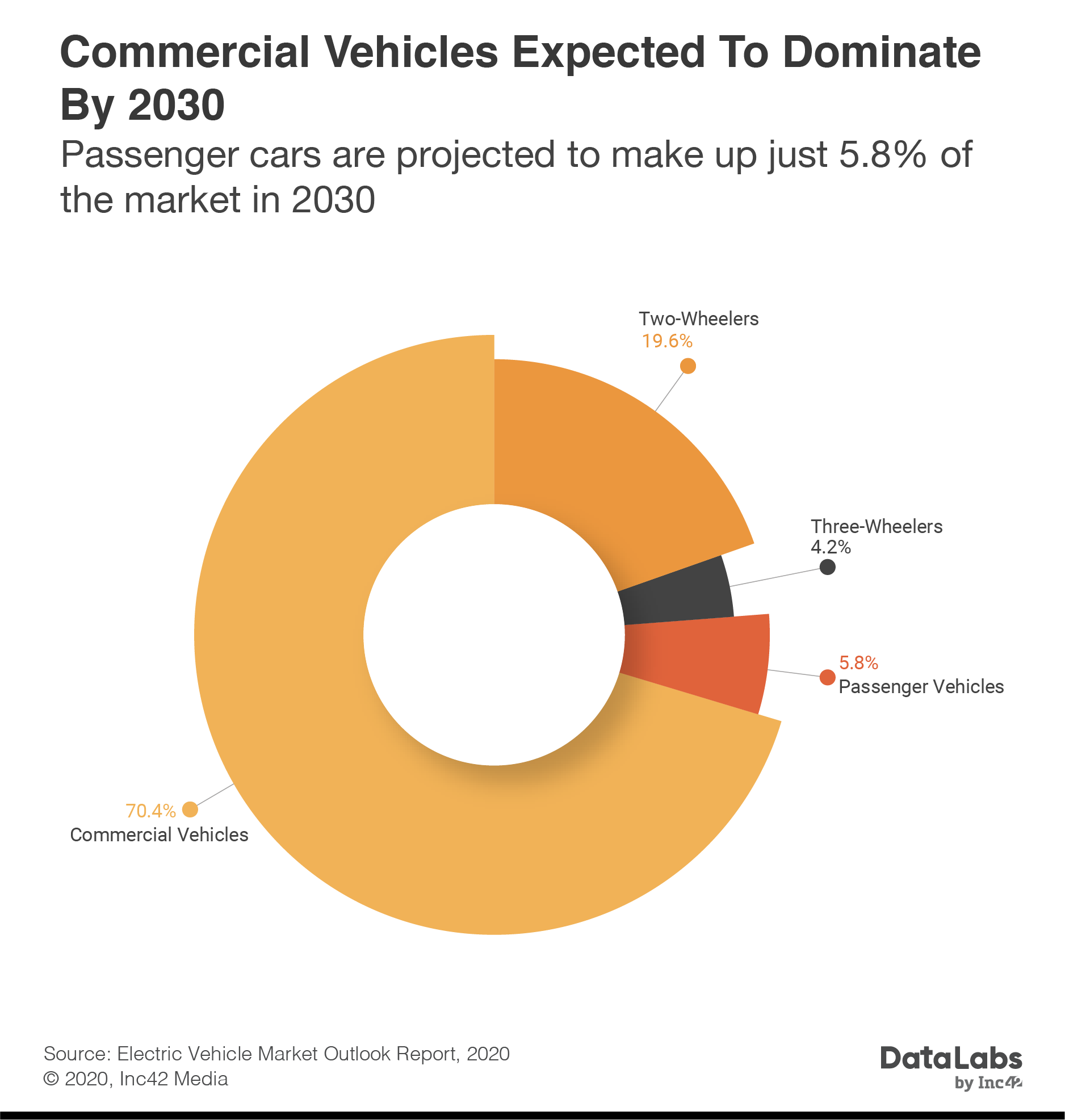 Still a long way in the mass adoption of passenger vehicles

India has barely sold more than 8,000 electric cars in six years. Whereas, China sells more than that in two days as per a Bloomberg report from October 2019.

Charging infrastructure has always been a concern for Indian EV market. There is a strong need for combining existing refuelling stations or providing stations in short distances. Though, government is helping in building the required infrastructure as it announces the development of more than 2000 charging stations across multiple cities, more efforts are required in terms of using old batteries and using more efficient technologies to encourage adoption. 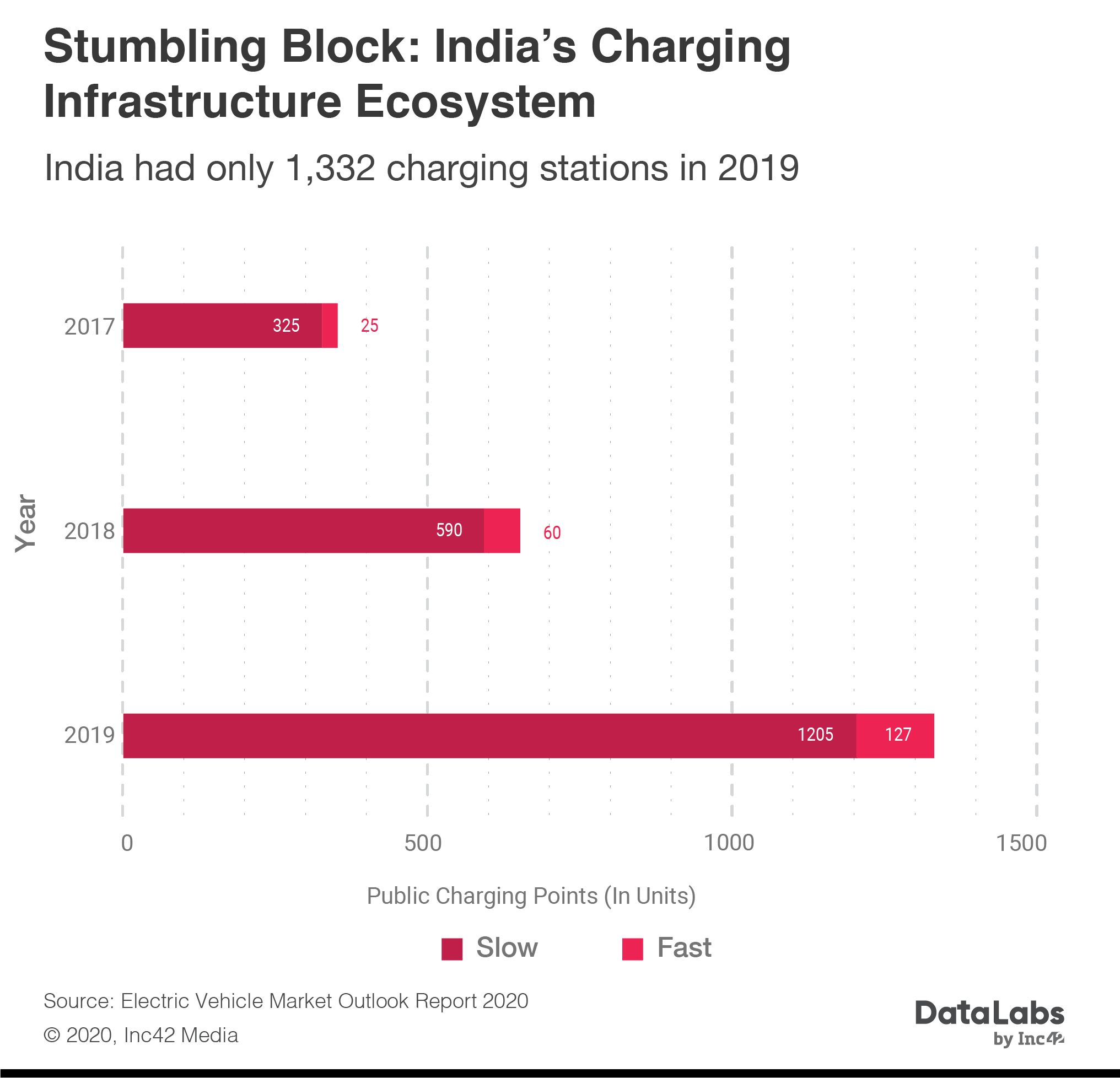 High Reliance On Imports For Components And Batteries

At the moment, most manufacturers rely on batteries imported from Japan, China, Korea and Europe. There is no primary battery cell manufacturing in India which poses the risk of increasing our trade deficit. Hence, the Indian market needs encouragement for indigenous technologies that are suited for India from both strategic and economic standpoint, such as solid state and fuel cell batteries.

The other challenge which needs to be addressed is the durability of batteries as at present, the Hyundai Kona electric has the highest range of 452 km on a single charge among electric cars available in India, which could change in the years to come.

Establishment of a robust supply chain along with charging infrastructure will also be needed for automakers to make the shift feasible at their end. Further, recycling stations for batteries will need to recover the metals from batteries used in electrification to create the closed-loop required for the shift to electric cars to be an environmentally-sound decision, even after electric vehicles have aged.

Electric cars are highly priced due to the technicalities involved in the manufacturing, the average cost of electric cars in India is around INR 16 Lakhs, which is much higher than the average INR 6-7 Lakh for economical cars. The factor itself discourages the majority of Indian consumers from buying electric cars. The high cost of manufacturing needs to be tackled as it directly impacts the purchasing power of consumers, even though new-age models of shared mobility help users offset a lot of this cost.

Another major challenge preventing larger-scale adoption of EVs today is the fact that availability is quite limited. The challenge can be addressed through more supply that accommodates for larger, more cost-effective batteries that provide a better overall range, which will bring down the cost of vehicles. Given the low demand for passenger cars, commercial vehicles are seen as the saviour for India’s electric mobility transition.

India’s auto industry became the fourth largest in the world with sales increasing 9.5% to 4.02 Mn units in 2017 (excluding two wheelers) and emerged as the seventh largest manufacturer of commercial vehicles in 2018.

Moreover, the government’s efforts in encouraging the use of electric vehicles is boosting the demand for electric commercial vehicles across businesses in India.

Amazon India, as part of the company’s attempt to reduce the carbon footprint and environmental impact of its operations, has made a commitment to deploy 10,000 electric vehicles (EV) into its delivery fleet by 2025.

The two factors driving the growth of the commercial electric vehicle market are high subsidies provided by the government and increased electric vehicle infrastructure development in the country. The likes of Tata Motors, Olectra Greentech, Mahindra Electric, Volvo Eicher Commercial Vehicles, JBM Auto, among others are already working in this regard.

Not just in logistics but cab services too are all set for the electric revolution in the commercial segment with electric cabs startups such as Lithium Urban, Blu Smart, Ola Electric, E-Taxi and others contributing towards the growth.

While usage of electric vehicles is still at a nascent stage in India, from ride-hailing startups going the electric way and ecommerce startups adopting electric vehicles for last mile deliveries, India is all set to go electric in the commercial vehicles space. 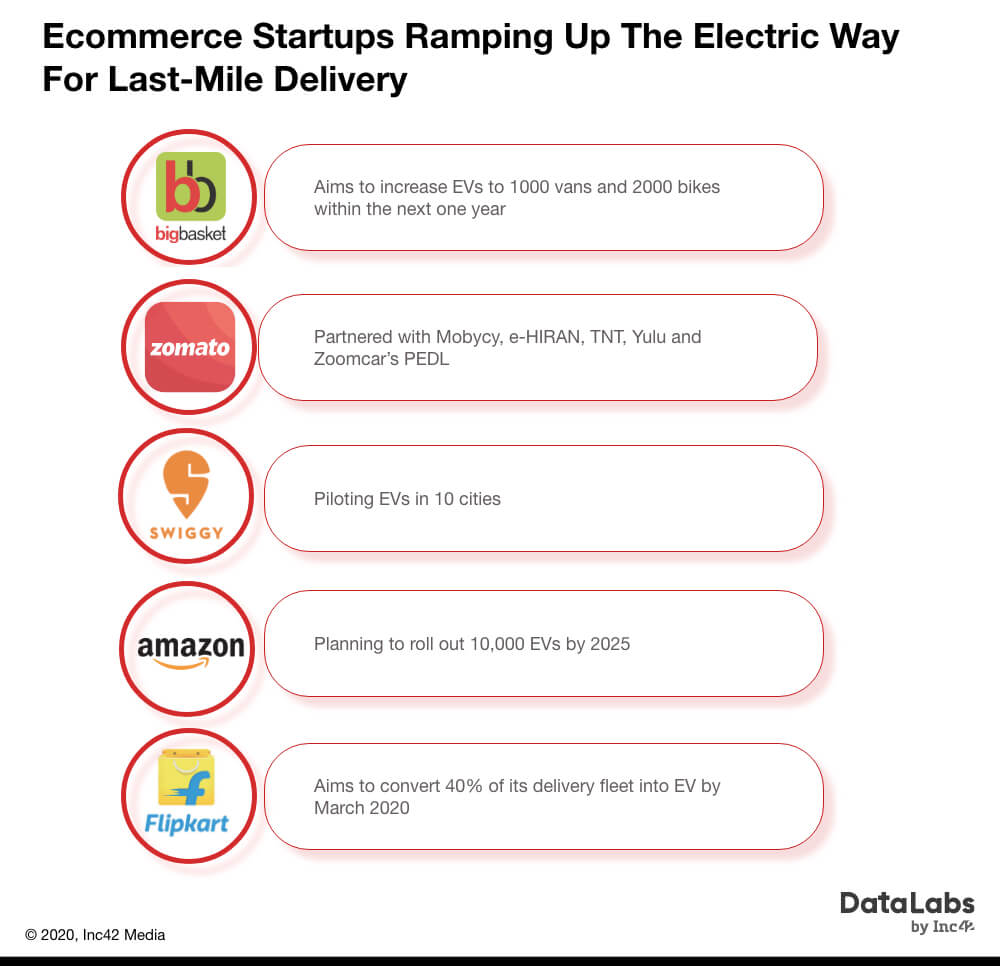 These efforts for adoption of electric vehicles in commercial space look favourable for the Indian market and going forward we can expect other companies to follow suit.

With the government pushing for EV adoption and helping in building a robust infrastructure with several plans to establish 2,636 charging stations for EVs throughout the country, there is a long way for India to achieve 100% EV target. Efforts of both manufacturing companies and government are required for increasing the fleet of passenger vehicles and commercial vehicles with a major focus on cost and infrastructure.