Despite the controversy, Tandav by Amazon Prime was the second most-viewed OTT show across platforms in the week of its launch, recording 3.2 Mn views within three days and clocking 5.9 Mn views in the second week

Will OTT platforms in India survive the new era of digital media regulation?

The outbreak of the Covid-19 pandemic has affected almost every industry in India, barring a few. And if truth be told, the over-the-top (OTT) platforms gained most from nationwide lockdowns as much of the population was forced indoors and veered towards home-based entertainment options. Almost overnight, OTTs shed their shell of urban elitism and became the go-to sources of mass entertainment, breaking all barriers and seeing an unprecedented surge in demand. In fact, the numbers tell us all. There was a 30% rise in the number of paid subscribers, from 22.2 Mn to 29 Mn between March and July, 2020.

Although OTTs came of age in India in the pandemic year, better internet connectivity, tech-enhanced networks and robust media-streaming smartphones had already paved the path for a significant boost in OTT consumption. The pandemic was the catalyst, though, as a huge chunk of paid subscribers came on board, not only from the metros but also from Tier 2 and Tier 3 locations. New-age video OTT platforms, including Netflix India, Amazon Prime Video, Disney+Hotstar, Zee5 and the likes have seen healthy growth in the Indian market. But their rapid rise in recent times is surely disrupting and diversifying the market.

The question is: Will this growth story continue?

Ever since the Ministry of Information and Broadcasting (I&B) announced new and stricter digital guidelines on February 25, 2021, the future of OTT players in India has remained doubtful.

The new guidelines have a three-tier monitoring mechanism in place to tighten the government’s grip over OTT content. Besides, OTT players have been asked to self-classify their content under five age groups. These include ‘U’ (Universal), U/A 7+, U/A 13+, U/A 16+ and A (Adult) content.

But the problem goes deeper than age suitability. If we look at some of the most-viewed shows on OTT platforms, we will soon realise that a large chunk of the content is fraught with controversy, and objections have been raised either by a section of viewers or by the government agencies.It is not unlikely that OTT shows hurting political or religious sentiments will bear the brunt of the new regulations, and this may eventually impact these platforms’ viewership and revenue.

What Comes First, Controversy Or Popularity?

One cannot say with authority whether controversy makes a show popular or popular shows attract controversy. But a general analysis of the OTT shows streamed in the past couple of years suggests that topics related to politics and religion attract attention (and criticism) from the self-proclaimed guardians of society. Be it Mirzapur, Tandav, Suitable Boy Or Leila, all these shows have featured one of these two elements and grabbed more eyeballs. Subsequently, several conservative groups across the country have called out these shows, blaming them for being politically motivated or initiating an attack on Indian culture.

Interestingly, if we look at the list of original content that has been aired so far by OTTs, we will see that the most controversial ones top the popularity chart. 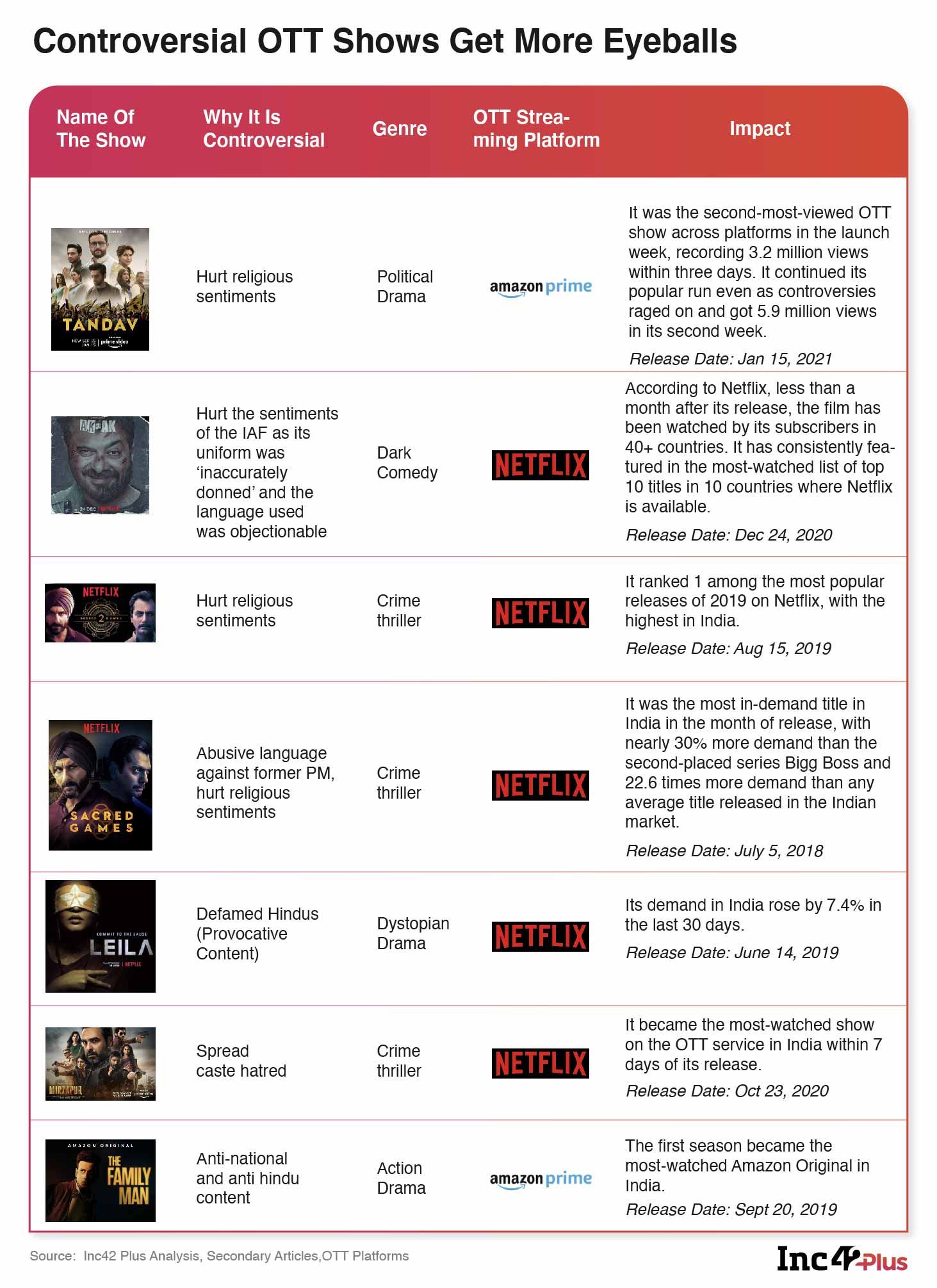 The reason behind this popularity is not too difficult to understand. Controversial OTT shows have possibly made audiences more curious about their themes and content. Hence, the overwhelming viewership. The recent controversy surrounding the political drama Tandav, released on Amazon Prime Video, brought it in the limelight and triggered more views.

Tandav has taken a lot of heat due to certain scenes or dialogues that allegedly dishonoured Hindu deities and thus hurt religious sentiments. That the character in these contentious scenes is played by a Muslim actor (Mohammed Zeeshan Ayyub) also aggravates many.

The I&B ministry called Amazon India officials for a meeting to address the complaints it had received against the show. Meanwhile, an FIR was filed against the makers after MPs of the ruling Bharatiya Janata Party (BJP) had lodged complaints. As per the I&B ministry’s guidance, the people behind the production aired an apology on social media and agreed to delete the controversial scenes.

According to media consulting firm Ormax, Tandav was the second most-viewed OTT show across platforms in the week of launch, notching up 3.2 Mn views within three days. Even as controversies raged on, it continued its successful run with 5.9 Mn views in its second week and ranked No. 1 in the list of top OTT originals in the first week of February.

Mirzapur (Season 2), a crime thriller streamed on Amazon Prime, also came under fire as the lead actor, Ali Fazal, supported anti-CAA protests in his tweet. This led to #boycottmirzapur2 trending on Twitter even before the web series was released. The show, which also drew flak for allegedly spreading caste bias, ranked No. 3 in the list of top OTT originals in the first week of February, even though it was released in October 2020.

Going by these numbers and rankings, it is quite evident that controversial content on OTT shows has ignited people’s curiosity, driving more views and bringing in more revenues. Also, most of the controversial content has been featured by leading international brands such as Netflix and Amazon Prime streaming in India. But as we have pondered before, will the new digital guidelines restrict the scope for original content on these platforms and hurt their viewership and revenue? Worse still, will the creative community (writers and directors) feel too restrained when it comes to exploring and interpreting issues that plague Indian society today?

As William Hazlitt so rightly said, “When a thing ceases to be a subject of controversy, it ceases to be a subject of interest”. This also reflects the fear of the OTT platforms regarding content stickiness now that they have to abide by the I&B guidelines. The new regulation says that content must be taken down if any government agency or individual objects to any controversial matter. Such stringent measures are bound to affect the OTT numbers in terms of views and revenues. But before we get into that, a close look at the three-tier mechanism will further clarify how things have changed.

According to the new digital guidelines, OTT platforms will be subjected to a three-tier oversight mechanism. The first level includes adequate classification of all content on OTT platforms. Besides, each platform must appoint a grievance redressal officer with his/her contact details available on the website.

The second level includes a self-regulating body, headed by a retired judge of the Supreme Court or a high court and appointed by a panel headed by the I&B ministry). The body will not have more than six members, consisting of experts from the media, entertainment and broadcasting industries.

The body will be responsible for addressing grievances not already resolved by digital media intermediaries. The second-level resolution must be carried out within 15 days of receiving a complaint.

The third level will have an inter-departmental committee (IDC), constituted by the I&B ministry. The committee will be headed by an authorised officer of the ministry (not below the rank of a joint secretary) and will address the complaints referred to it by the self-regulating body or by the ministry. The IDC head will have the power to issue directions for blocking certain content. The committee will also be able to take certain matters suo motu, without waiting for either of the first two tiers to be exhausted.

The Cost Of Censorship

Complying with the above guidelines and taking down content (as and when such cases arise) will hurt OTT shows as their production cost is much higher compared to TV shows. According to a KPMG report, the production cost of shows like Made In Heaven or Mirzapur could be INR 1-2 Cr per episode, while TV shows cost INR 10-15 Lakh per episode on average.

Moreover, the economies of scale (cost of sets and other fixed costs) are ascertained over 300+ episodes in TV shows as against 8-10 episodes in an OTT series, thus increasing the cost of production for the latter.

As discussed above, OTT shows will be subjected to a three-tier oversight mechanism, which will restrict almost all contentious content. Although OTT show makers will be more cautious from now on, a few shows will still fail to pass muster, resulting in a scene cut or a possible takedown of an entire show, thus causing financial repercussions.

With level 2 and level 3 of the oversight mechanism in place (too stringent, as we can see), OTT platforms would have to toe the line and over-censor the content that might not be in line with the prevalent social, religious and moral norms. But that will also take the ‘controversy’ zing out of those shows and may soon see a massive dip in views. Does it sound like OTTs in India are on the horns of a dilemma? It will be interesting to watch how they can retain their viewership and still play it in tune with the Indian government’s latest mandate.