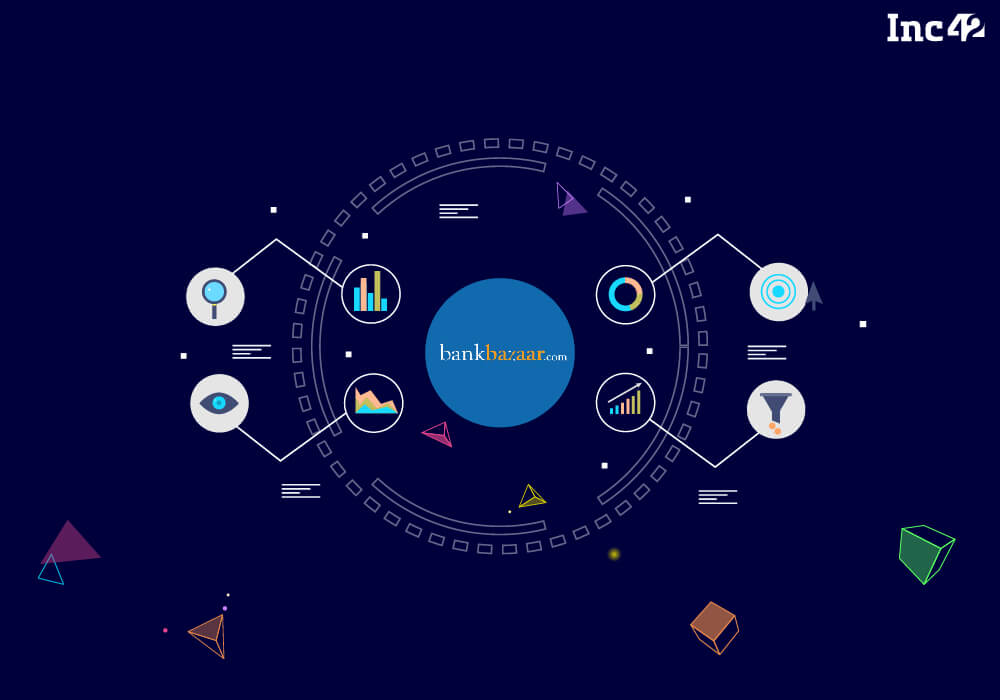 An Analysis Of The Financials of Online Financial Marketplace BankBazaar, Which Completed 10 Years Of Operations In February 2018

Chennai-based online financial marketplace BankBazaar, which completed 10 years of operations in February 2018, has slowly but surely emerged as a company to reckon with in the Indian fintech space.

In FY16-17, it posted revenues of $10.5 Mn and decreased its losses by 15% compared to the preceding financial year. Till date, it has raised $110 Mn through funding from marquee investors such as Amazon, Fidelity Growth Partners, and Sequoia Capital, Experian among others.

BankBazaar, founded in 2008 by Adhil Shetty, Arjun Shetty, and Rati Shetty, was one of the first fintech startups to provide a long-desired solution to the rigged Indian banking system. At that time, India’s banking system was traditional and had an agent-driven model — sales were purely driven by the agent’s intent for profit, and not keeping in mind the customer’s benefit, as it should be.

This started changing with the advent of fintech startups like BankBazaar, Policybazaar, Easypolicy, My Insurance Club and others. BankBazaar, which claims to get over 50 Mn visits per quarter is an aggregation platform for loans, insurance, credit card, and other financial services. Apart from being a one-stop online shop for customers to access all financial services, it also gives them essential information about these products and enables them to compare them across various parameters and decide what suits them best.

While the annual filings of BankBazaar for FY17-18 were not available with the ministry of corporate affairs (MCA), we at Inc42 Datalabs did our own digging into the fintech startup’s financials as a precursor to our analysis of FY17-18 filings.

We also compared it with its competitor PolicyBazaar, an online insurance aggregator.

In the same period, PolicyBazaar reported a revenue of INR 49.74 Cr (∼$7 Mn), approximately 4X more than the previous financial year. However, the growth in revenue for PolicyBazaar came at the cost of its expenses almost doubling.

The revenue growth of the online financial marketplace in FY16-17 as compared to FY15-16 was quite insignificant. This could be attributed to the reduction in operational expenses in the same financial year. The revenue split for FY16-17 shows 76% of its income came from commissions.

In FY16-17, the online financial marketplace rolled out new features such as personal finance and paperless mutual fund on its platform. These required it to expand its workforce, reportedly by more than 400. While such expansion should typically result in an increase in expenses, the online financial marketplace reported a 10% reduction in its expenses in FY16-17 compared to FY15-16.

With revenues remaining the same and expenses reduced by ∼10%, the online financial marketplace managed to decrease its losses by ∼15% in FY16-17, as compared to FY15-16. It achieved this by tightening the belt and curbing its advertisement and other admin related expenses, along with sustainable expansion of its services. This helped the startup turn profitable in the coming years.

Although BankBazaar has been able to steer its path towards profitability with its sustainable expansion strategy, its financial metrics show that it still depends heavily on funding. The solvency ratio was quite low in FY16-17 at -3.04, lower than it was in FY15-16.

This indicates that the company’s cash flow is not sufficient to meet its short- and long-term liabilities. (Definition: Solvency Ratio quantifies the size of a company’s after-tax income, not counting non-cash depreciation expenses, as contrasted to the total debt obligations of the firm.)

Further, its net working capital as a percentage of sales in FY16-17 was 253%. This figure that tells a business how much of every sales dollar must go toward meeting operational expenses and short-term debt obligation. This essentially means that BankBazaar spends INR 253 (∼$4) for every INR 100 (∼$1.5) revenue. However, the figure came down from 409% in the previous financial year.

Apart from India, BankBazaar also has an office in Singapore and Malaysia. It commenced operations of BankBazaar.sg (Singapore branch) in 2016 and bbazar.my (Malaysia branch) in 2017. In Singapore, BankBazaar is setting up to compete against homegrown startups like compareFIRST and Moneysmart, while in Malaysia the competition is against iMoney.my, SaveMoney.my and other local players. The commencement revenue of BankBazaar from the Singapore branch for FY16-17 was INR 1.6 Cr (∼$0.2 Mn) — 3% of the total revenue of the company. The revenue from its Malaysian counterpart will be available in FY17-18 fillings.

The company’s ownership split stood as below before its Series D funding in October 2017.

Amidst The Changing of Tides

The insurance sector is getting increasingly privatised and coming online. It is moving from a traditional agent-driven model to a digital marketplace one but is still shackled within its own limits. Although in FY12-13, according to IBEF the insurance private sector was just 2% of the whole market, and in FY17-18 it reached 29.69%, the sector is still majorly dominated by traditional players like LIC, GIC, and private banks.

According to IBEF, India with 3.42% penetration rate in the insurance sector offers greater penetration potential when compared to global average of 6.2%. The country’s insurance market is expected to quadruple in size over the next 10 years from its current size of $60 Bn.

So far, there are only a few players like BankBazaar, Policybazaar, and its subsidiary Paisabazaar that have been able to make their mark in the insurtech domain.

With demographic factors such as growing middle class, young insurable population and growing awareness of the need for protection and retirement planning will support the growth of Indian life insurance companies. Online insurance aggregators will have a key role to play in tapping into this unorganised market. So far, there are only a few fintech players like BankBazaar, Policybazaar, and its subsidiary Paisabazaar, that have been able to make their mark in the insurtech domain.

Compared to the other fintech players, BankBazaar seems to have positioned itself well on the financial matrix as revealed from the above revenue analysis for FY16-17. Furthermore, its other vertices of loans, credit cards and mutual funds has contributed to foster the growth of the startup. It has positioned itself as the one stop shop for comparing almost all forms of financial services. Coupled with controlled costs and increased revenues, BankBazaar is heading towards a sustainable business model.