[What The Financials] Dabbling In Telemedicine And Diagnostics, Which Healthtech Startup Is In The Pink Of Health?

[What The Financials] Dabbling In Telemedicine And Diagnostics, Which Healthtech Startup Is In The Pink Of Health? 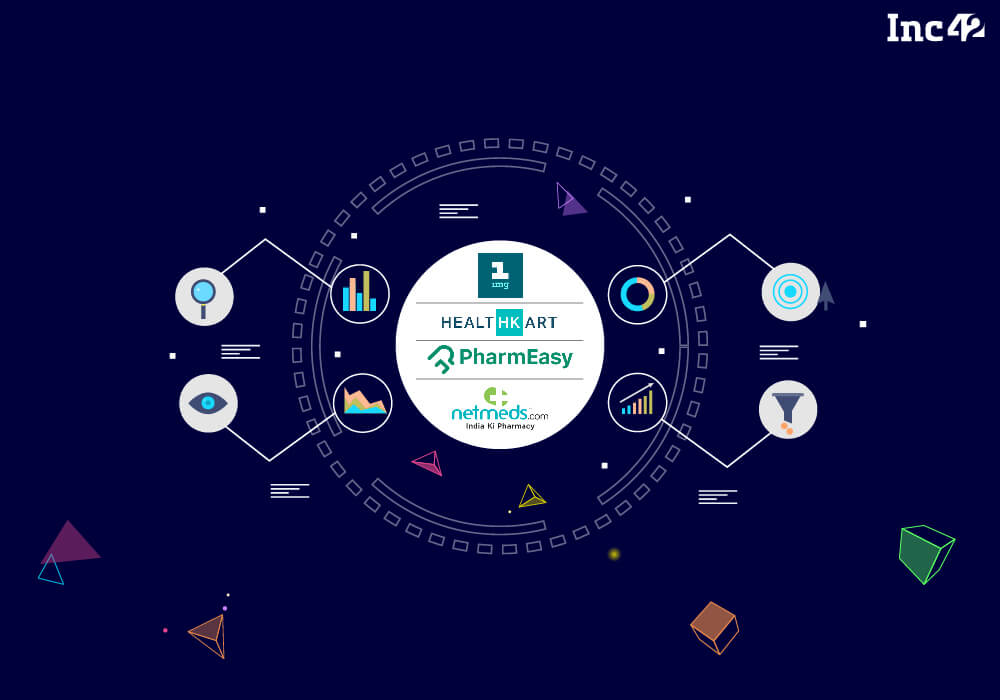 1mg Was Valued At $75 Mn In Its Last Funding Round, PharmEasy Is The Startup To Watch Out For This Year, And NetMeds Has A Secret USP

Healthcare is one of the biggest revenue and employment generating sectors in India and was expected to touch US$ 160 Bn by 2017. Like all other sectors, healthcare is abuzz with technology-driven startups. At present, India is home to as many as 240 healthtech startups, leading innovation and redefining healthcare.

Inc42’s recent analysis of the Indian startup ecosystem across sectors threw up some interesting findings. According to our Indian Tech Startup Funding Report H1 2018, deals and funding in the sector dipped in the first half of 2018.

So, what changed in the last six months to effect this decline?

In 2016 and early 2017, a major portion of healthcare investments went into startups that were working on telemedicine, enabling doctor appointments, and other health apps, but since H2 2017, that pie has been shared by wearable tech gadgets, genetic research, and the smart diagnostics space, which have seen rapid growth. Naturally, the funding slices have become smaller.

But deal and funding numbers alone don’t tell the entire story. Healthtech is still going strong. So, in this edition of What The Financials, we crunched the numbers of four leading players in the space of e-pharmacy and online diagnostics — 1mg, Healthkart, Pharmeasy, and NetMeds — to analyse their financial health as well as that of the healthtech industry. Here’s what we found:

1mg And Healthkart: Are Breakups Good For Business?

Founded in March 2011, Healthkart sells consumables such as protein supplements and vitamins and has more than 200 brands and authorised vendors on its platform. It also has private label products in the nutrition and supplements category.

Backed by investors such as Sequoia, Intel Capital, Kae Capital, and Omidyar Network, the company has raised $50.6 Mn till date, with the last round being in 2016. In FY17, Healthkart posted a total revenue of INR 124.48 Cr against total expenses of INR 166.29 Cr.

In April 2015, Healthkart separated its generic drug search business, HealthkartPlus, and rebranded it as 1mg, to be operated under 1mg Technologies Pvt Ltd. 1mg operates an online marketplace for medicines apart from facilitating doctors’ appointments and diagnostic test booking.

Backed by investors such as Sequoia Capital, Intel Capital, Omidyar Network, and Deep Kalra, co-founder of travel portal MakeMyTrip, the company spent INR 22.44 Cr in FY17 on advertising and promotional expenses. This was a 158% spike from its INR 8.66 Cr expenditure on advertising in FY16.

Healthkart is just a step behind 1mg. The company spent INR 21.97 Cr in FY17 on advertising and promotions against INR 8.69 Cr in FY16.

The companies also extensively increased their expenses on employees benefits. In FY17, Healthkart spent INR 29.17 Cr in this area, a 78% increase from its INR 18.42 Cr spend in FY16.

For Healthkart, which had a growth rate of 58% in FY17 on the basis of its total income, the total sales of services in FY17 was INR 9.53 Cr. On the other hand, it earned a large part of revenue through the sale of health products, amounting to INR 110 cr in FY17, an increase of 45% from FY16.

In FY16, there was a dip in Healthkart’s revenue by 27%, coincidentally at the same time when 1mg separated from the company.

The separation was aimed at individually capturing the healthcare products and services marketplaces in India and the strategy seems to have worked well.

Founded in 2010, NetMeds is a licensed pharmacy marketplace that offers authenticated prescription and over-the-counter (OTC) medicines along with other health products.

PharmEasy was founded in 2015 and particularly caters to the chronic-care segment. It offers a range of services including teleconsultation, medicine delivery, sample collection for diagnostic tests as well as a subscription-based service, which is currently live in a few cities.

Another interesting thing to note is that NetMeds spent INR 20 cr on advertising and promotions in FY17, while PharmEasy spent just INR 9.34 Cr on these heads in the same period.

To The Good Health Of The Healthtech Sector

Of the four healthtech companies we analysed above, NetMeds is the only player that has its own warehouse. In FY17, the company spent INR 3.27 Cr on freight and INR 2.2 Cr on warehousing, which further helped NetMeds in capping its logistics expenses to INR 5.5 Cr.

On the other hand, PharmEasy, which has a revenue of almost one-fifth that of NetMeds, spent INR 8.7 Cr in logistics in the same period.

Thus, it would be fair to conclude that Netmeds is the winner of our healthtech financial analysis with the highest revenue and better expense management. At the same time, 1mg and Healthkart are aiming for niches and are targeting to grow in their individual markets; however, 1mg’s growth is coming at a bit of a high cost. PharmEasy is walking in the steps of its peer, Netmeds, but has a lot of catching up to do in terms of growth.

Overall, the global healthtech market is anticipated to reach $104.5 Bn by 2020, according to a new report by Grand View Research. Meanwhile, the Indian healthcare market is further expected to reach $280 Bn by 2020, from the current $100 Bn, according to an IBEF report. There’s certainly an open opportunity for healthtech startups in India, but only the ones that take the right steps will succeed.