How BNPL Startups, Pay Later Models Are Rewriting The Future Of Lending In India

How BNPL Startups, Pay Later Models Are Rewriting The Future Of Lending In India 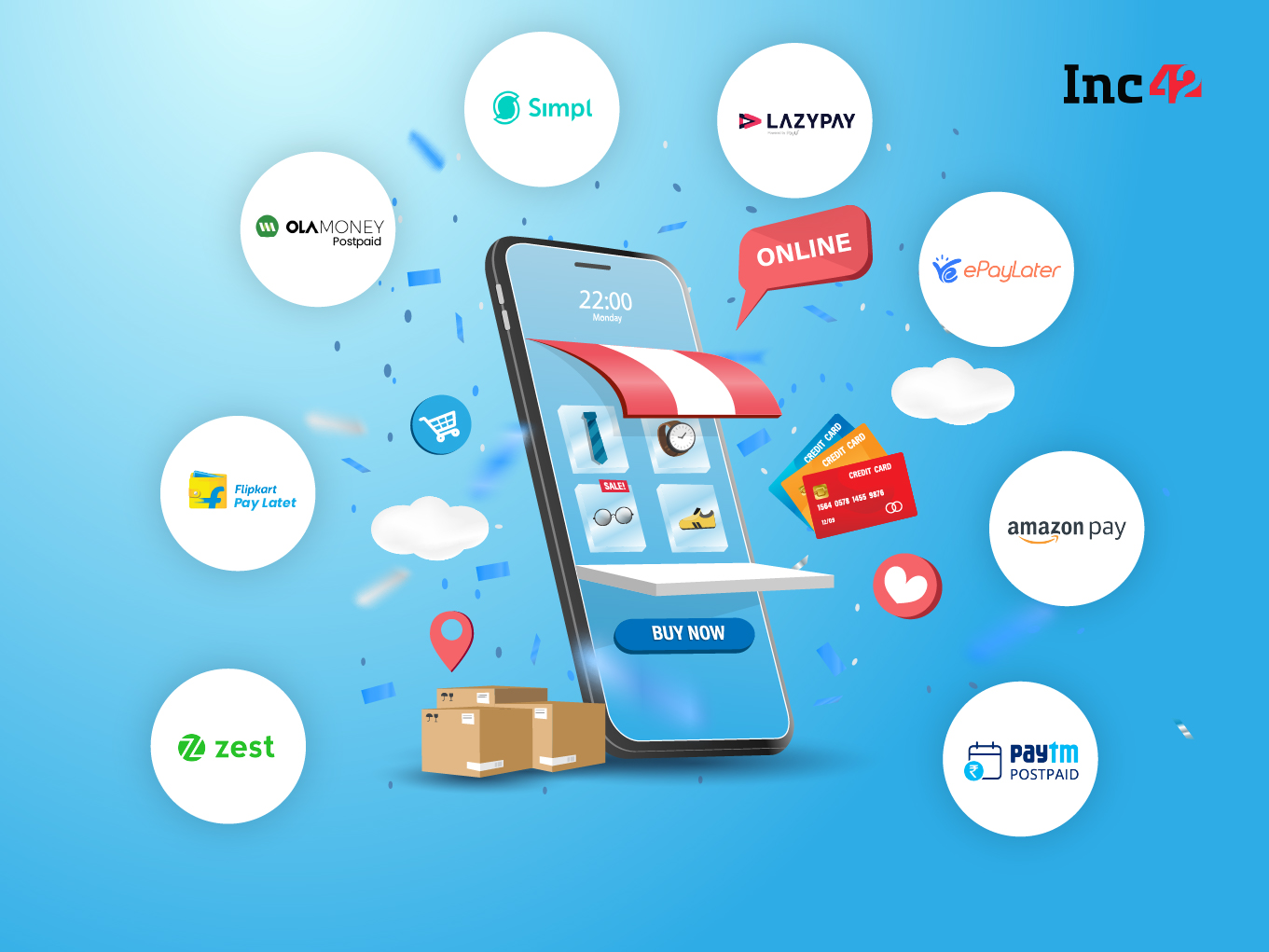 Covid-19 has brought in a paradigm shift in India’s digital payments landscape, and has led to rise of several sub-industries such as Buy Now Pay Later (BNPL) in India

While India has handful of players in this segment, to capture the industry further — traditional banks such as ICICI Bank (ICICI PayLater) and HDFC Bank (FlexiPay) have also stepped into the competitive BNPL space

BNPL is emerging as the fastest growing ecommerce online payment method in India, estimated to capture 9% of the total ecommerce market share by 2024, according to Global Payments Report by Worldpay from FIS

Ecommerce is gaining momentum in India with consumer and retail business adoption at an all-time high. While companies are trying to maintain a strong foothold in Tier 2 and 3 cities due to the rise in demand from these markets, they are also aiming to expand their horizons in metros and Tier 1 markets with D2 plays to cater to the rising disposable income in these regions.

Over the past couple of years, there has been a major uptick in the number of online shoppers in Tier 2 and 3 cities due to improving internet penetration, increasing awareness about ecommerce and adoption of cashless payments. Currently, 67% of the online consumer demand comes from Tier 2 and beyond cities in India, according to a Unicommerce report.

To cater to the higher demand and expand their addressable base, the ecommerce industry is not only launching new product features for consumers but also catering to the financial crunch. Cashless credit models are expanding the spending capacity of consumers in Tier 2 and beyond, which is where buy now pay later (BNPL) startups are making major inroads.

BNPL is a short-term micro credit model, where consumers have to pay little to no interest for online purchases through ecommerce platforms. Starting in ecommerce marketplaces, BNPL startups are tying up with food delivery companies, travel booking players as well as grocery and other essential delivery platforms. This has allowed consumers to purchase and delay the payment by 14–30 days or repay the amount over several installments. The success of BNPL in the Indian context can be attributed to the fact that it offers formal microlending in an informal way, without putting customers through the cumbersome loan processes of traditional banks.

The lending tech industry, which has found credit gaps in the traditional BFSI segment, has come up with numerous such products in the last two to three years to cater to the decline in the spending capacity, rise in the millennial population who demand credit access. The outbreak of Covid-19 accelerated the growth of the BNPL-like products by further impacting financial stability and income continuity, while also forcing consumers to adopt ecommerce platforms.

Economic uncertainty, job loss, salary cuts as a result of the pandemic lockdown brought in a paradigm shift for digital payments and BNPL in particular.

Buy now pay later (BNPL) is an emerging lending tech sector in India with the presence of several startups and fintech platforms now testing various strategies. In addition to pureplay BNPL startups such as Simpl, Lazypay, Zestmoney, ePayLater, ecommerce marketplaces Flipkart and Amazon India also offer their own BNPL products, while even fintech and payments companies such as PhonePe (via Flipkart) and Paytm have ventured into this territory

Simpl, for example, is working with over 2500 merchants and has over 7 Mn active users. Posting a compound annual growth rate (CAGR) of 36%, India’s BNPL sector is expected to reach $100 Bn by the end of 2023 which indicates just how popular these lending platforms are, even in their infancy.

While startups have led the adoption charge, traditional banks have held back from venturing into BNPL due to the fear of cannibalising their lucrative credit card business. It is only lately that banks have realised that credit cards and BNPL can coexist and complement each other.

Banks are using BNPL to attract a new set of customers that have so far stayed away from credit cards. For instance, ICICI Bank partnered with payments giant Pine Labs to offer in-store pay-later facilities to retail consumers. This allows consumers to make high-value purchases with payments split over monthly installments (EMI). Besides offering a no-cost loan product, it eases onboarding by reducing documentation.

Such BNPL EMI offers available at offline stores via PoS device providers are turning out to be a potent tool for small and medium businesses to revive sales in the aftermath of the Covid slowdown. While BNPL helped consumers make small-ticket purchases, it has also found traction in driving the purchase of white goods and other big-ticket items, even on ecommerce platforms.

The launch of Amazon Pay Later and Flipkart Pay Later is said to have boosted sales on their respective platforms especially in the festive season sales in 2020. Last year, Flipkart highlighted that EMI options and pay later were an important enabler of credit for customers this year. The company witnessed 7x higher spends though pay later option and 1.7x higher adoption of the EMI schemes. So the ongoing crisis and pandemic pushed ecommerce giants to look for new opportunities and offer unique financial services and credit products to customers led by the BNPL revolution. 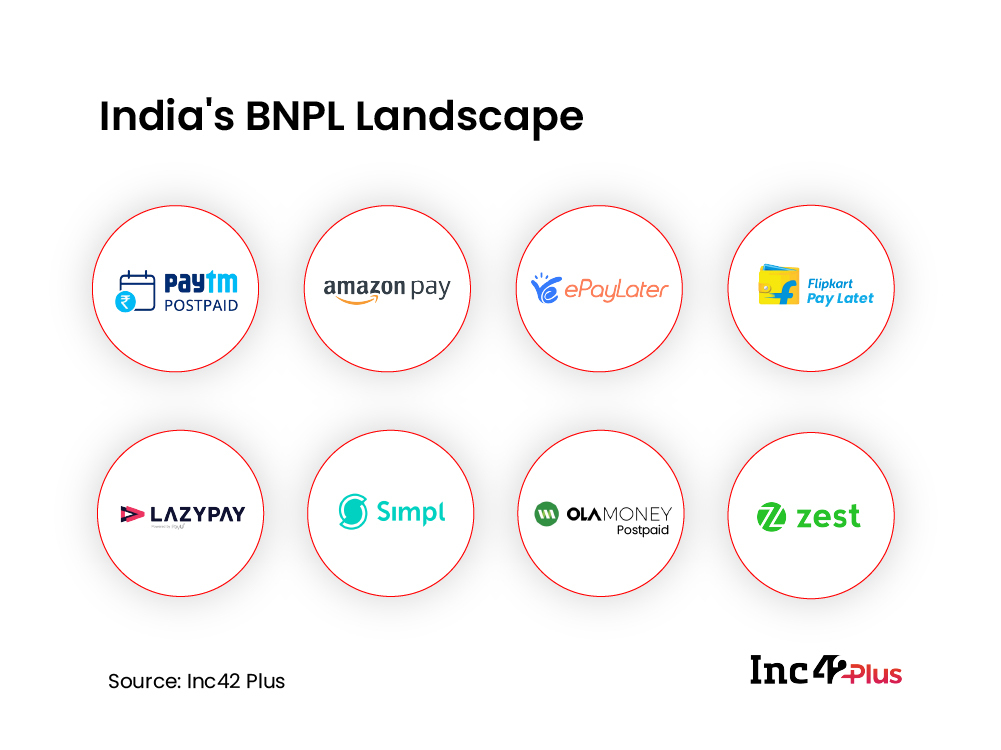 Why Is BNPL On Rise In India?

India is under penetrated with credit card penetration at 3% (per 100 population) which is among the lowest in the world as compared to global standards. Consumers not having enough credit are unable to afford medium and big ticket purchases.

Therefore, consumers look for financial services that offer ease and affordability but often due to high interest rates, fees and hidden charges levied on credit cards, people refrain using it. However, the BNPL model works in a similar way with low or no interest rates. It finances smaller ticket items and allows consumers to buy the essentials and pay at a later date.

Another major reason for the rise of BNPL in India is the rise in the ecommerce penetration in India. It is expected to capture 11.4% of the Indian retail market by 2026, while currently it stands at 7%, according to the Deloitte report. 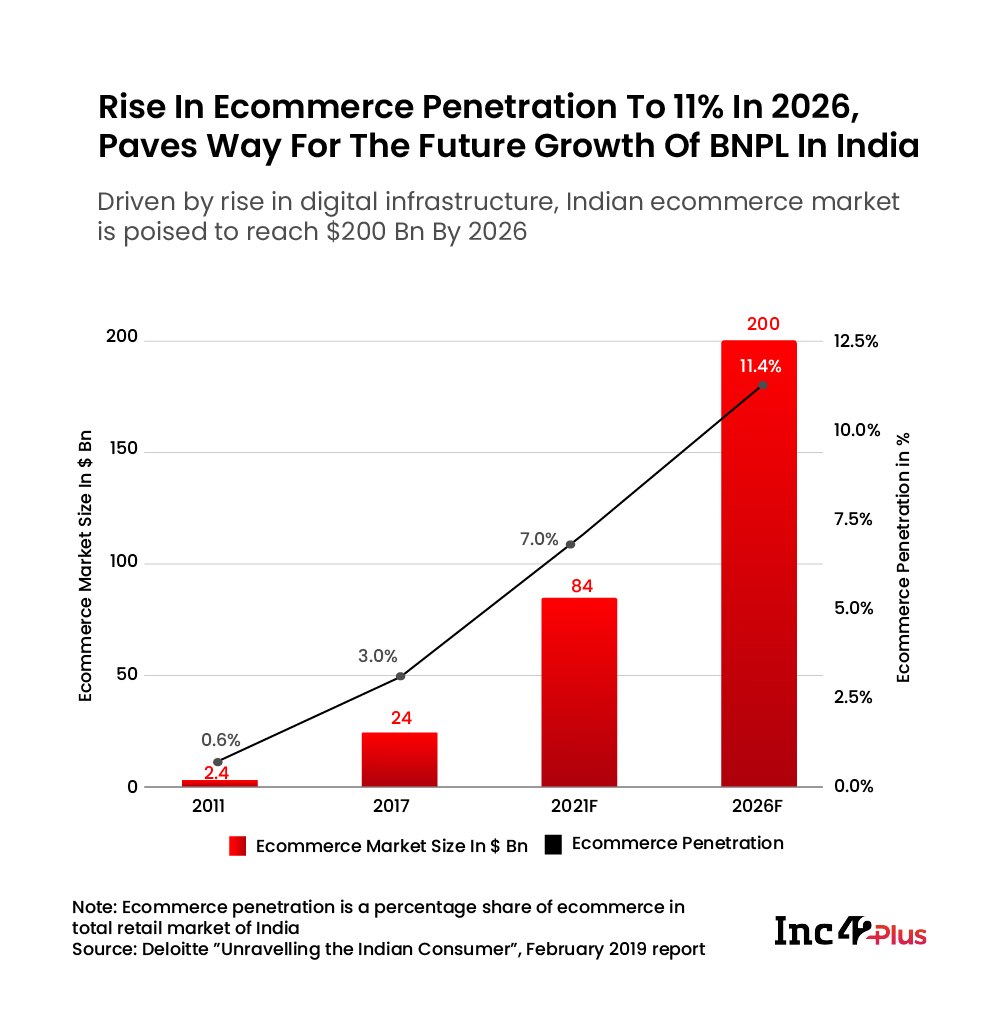 India is already riding on the new BNPL wave due to rise of digital infrastructure, growth in the ecommerce industry, increasing online shoppers, rise in digital payments, convenience and affordability provided by the short term credit. Not only these factors, Covid-19 acted as a stimulant for the growth of the ecommerce industry which also brought in a surge on the BNPL platforms.

How BNPL Players Stack Up To Each Other? 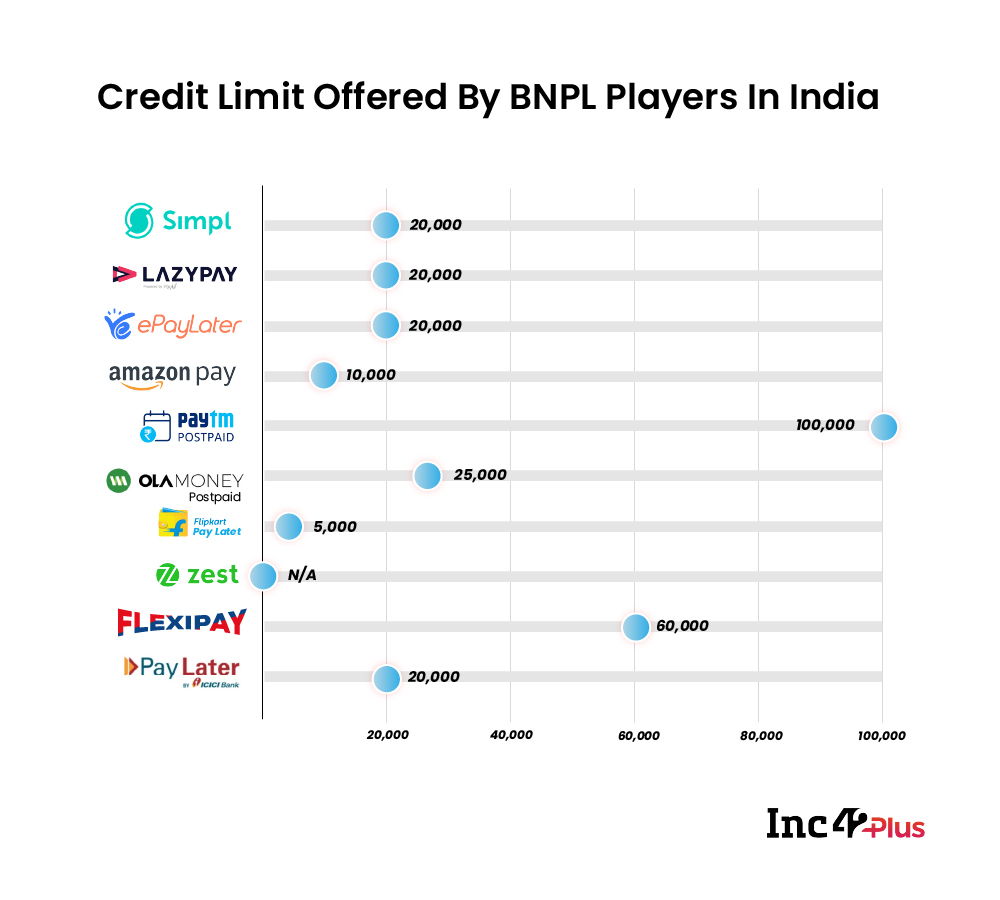 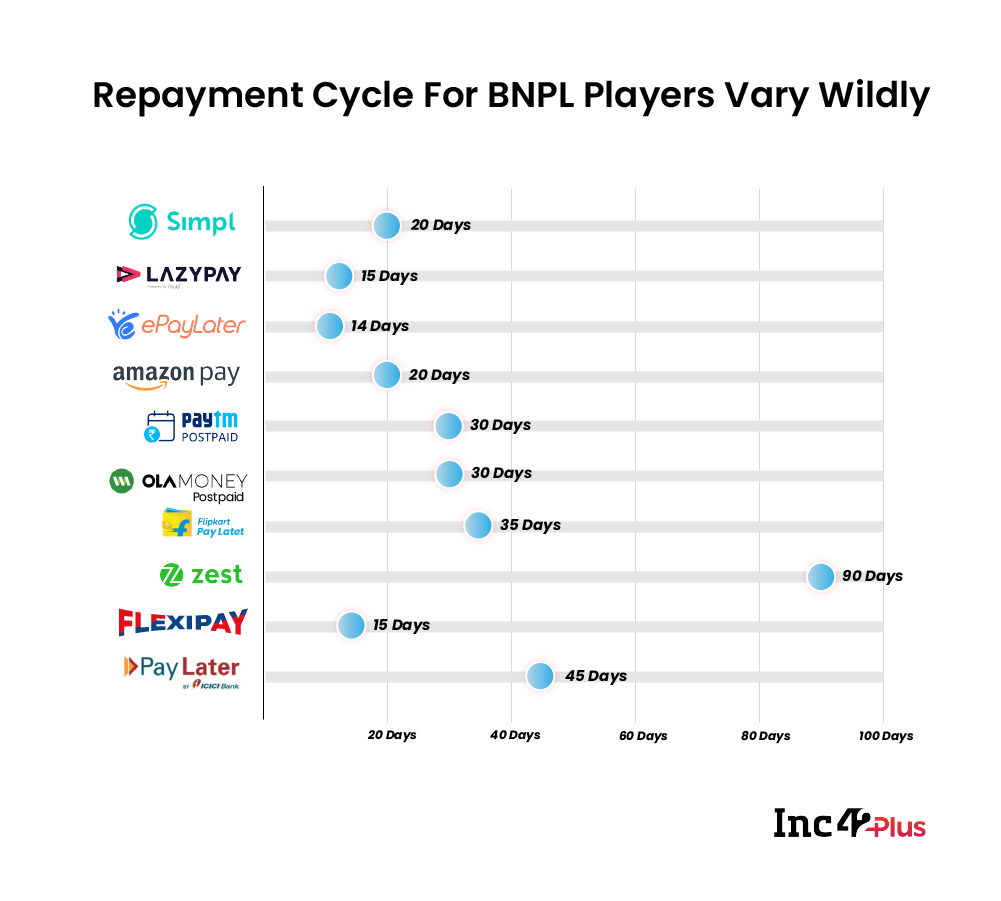 These BNPL offerings vary a lot. Credit limit differs on the basis of interest free and interest charged. For zero interest, BNPL offering is usually in the range of INR 5,000 to INR 25,000. These are typically meant for buying lower value goods such as apparel, food, personal care and consumer electronics like earphones. BNPL offerings of such kind are more focused on convenience than a credit need since the payment has to be made in one go on the due date. The repayment cycle for such BNPL offering usually varies from 15 to 45 days.

While for interest charged BNPL offering, credit limit ranges from INR 25,000 to INR 1,00,000. These are typically meant for higher value goods such as TV, smartphones and refrigerators. BNPL offerings of such kind are primarily to meet the credit requirement rather than convenience. Most of these products are sold at interest based EMI. The repayment cycle of such BNPL offering usually varies from 1 to 3 months.

What’s Next For BNPL In India?

According to the Global Payments Report by Worldpay from FIS, a US-based financial services technology company, BNPL is the fastest growing e-commerce online payment method in India, projected to grow from 3% in 2020 to 9% of the total ecommerce market share by 2024.

BNPL model is on the rise in India but now players have also started offering both deferred payment method (with zero interest rate) and EMI option (low interest rate) in order to attract both small ticket as well as large ticket size customers. Also, the EMI option is less risky than the deferred payment method for BNPL service providers since the credit is underwritten by banks and NBFCs and thus, credit bureaus play a major role in deciding whether a customer is eligible for the service or not.

Indian players are expected to follow the path of  international players, offering EMI based pay later solutions as it can help customers in making large ticket purchases.

Although the BNPL sector is out of the regulator’s purview as of now but it is expected to come under the scanner with its definitions changing with time.