As the addressable base and funding for edtech grows, the total ad expenditure by the leading edtech startups in India surged 2.3x between FY18 and FY19

Edtech unicorn BYJU’S, Toppr, SimpliLearn and Cuemath were among the edtech startups spending the most on ads in FY 2019

Besides the economic turmoil and recession created by the pandemic in many areas of industry, it did expand the addressable market for online learning and other edtech solutions in India. This can be ascertained by the fact that edtech startups bagged a total of $1.4 Bn in total funding, which is the highest among all startup sectors, between January and September 2020 i.e till Q3 2020.

Apart from the dominance of edtech in fundraising deals this year, the two major highlights from the sectors were the $300 Mn all-cash acquisition of WhiteHat Jr by edtech unicorn BYJU’S and the 2.8x surge in Unacademy’s valuation from $510 Mn in February 2020 to $1.4 Bn in September.

Furthermore, with elevated investor confidence and market adoption, the value created by edtech startups in India has also increased. As per Inc42 Plus analysis, the market size of edtech is estimated to be $10.4 Bn (2025), a 3.7x surge compared to the $2.8 Bn in 2020.

With ample investment, growing revenue potential and addressable base, it’s natural for any business to invest more towards brand equity and that is exactly the case with the established edtech startups in India.

Edtech Startups In India Spending Lump Some On Advertising

The most high-profile brand engagement for startups in the past two months has been the Indian Premier League 2020, which has gaming startup Dream 11 as the title sponsor. Besides this, there was a bidding war for various sponsorship opportunities for digital properties and real-world events.

When two edtech unicorns engage in a title sponsorship battle like BYJU’s (bidding INR 201 Cr or $29 Mn) and Unacademy (bidding INR 171 Cr or $25 Mn) did for IPL 2020, it indicates the length to which established edtech startups in India are willing to go in order to enhance their brand recall. 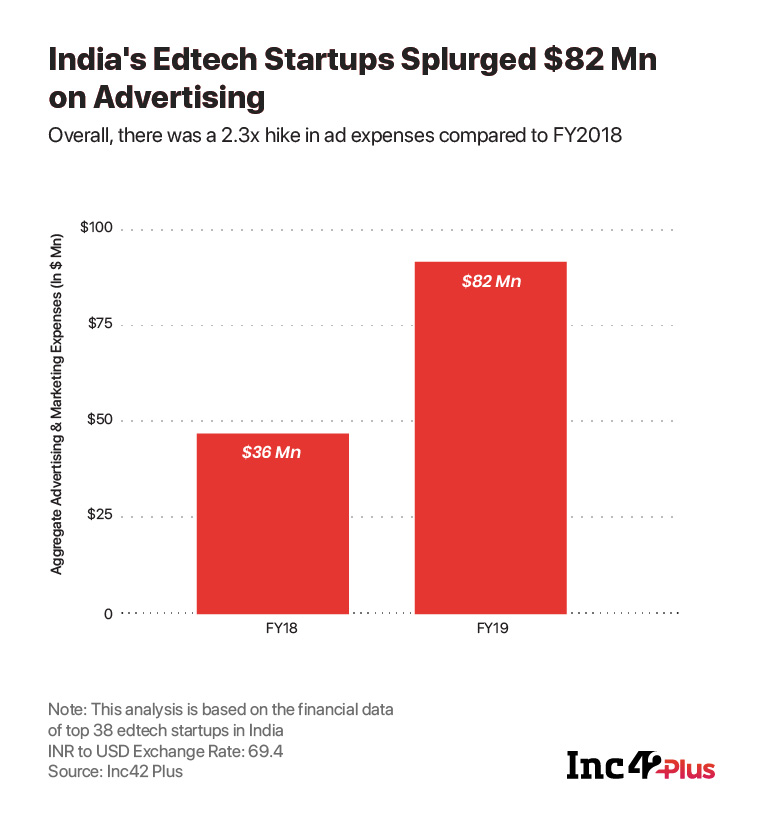 As per a study published by Brand Finance, the technology sector in India ranks second when it comes to the significance of brand reputation, compared to an average third position globally. The research also highlights that consumers in tech, generally feel that these brands (ones with higher brand value) broadly deliver on their promises. This justifies the ever-growing appetite of Indian tech companies towards brand building and advertising through new-age engagements. 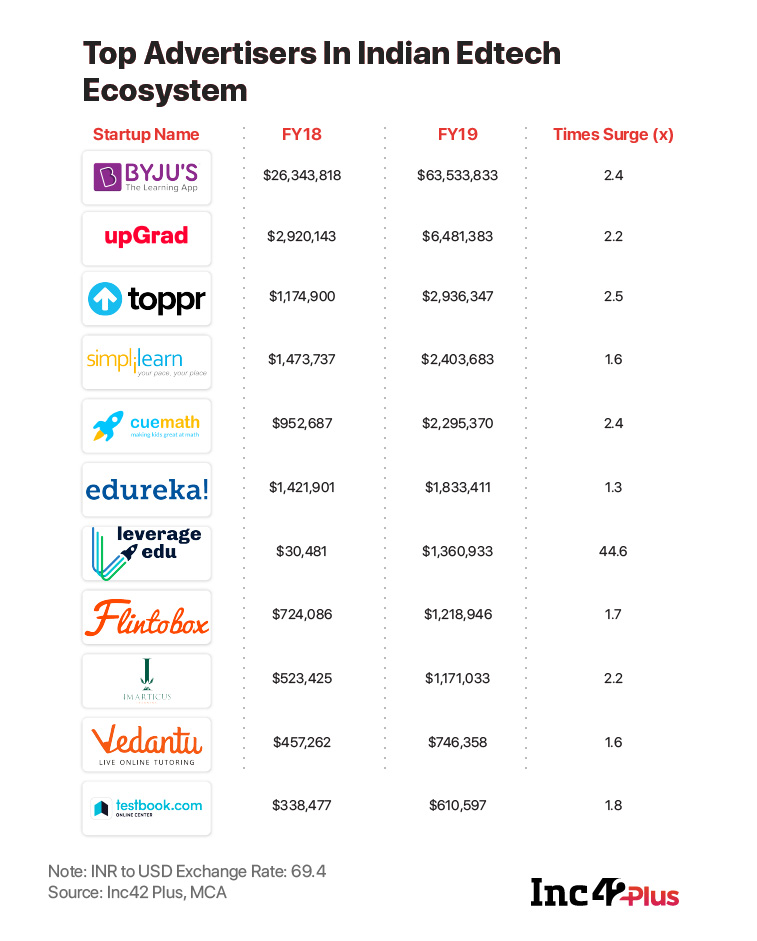 Who Is Winning The Branding Race?

With edtech startups doubling down on their marketing and advertising expenses, the bigger question in this regard remains: who is getting the most out of it?

In the latest Inc42 Plus release, The Future Of Edtech In India: Decoding The $10 Bn Market Opportunity, we partnered with customer insights analytics company Clootrack to look beyond the numbers and see the market response to edtech ad campaigns.

After analysing online conversations of over 90K consumers in India, which include teachers, students and parents, the study shows that upGrad, the online certification startup founded by Mayank Kumar and Ronnie Screwvala, scored the highest on our Advertising Effectiveness Score which is measured on a scale of 0 to 1,500. More such insights diving deeper into the brand strategy of top edtech startups in the country covering aspects such as the total brand equity score, key category drivers and popularity score can be found in our full report — The Future Of Edtech In India: Decoding The $10 Bn Market Opportunity.