The National Payments Corporation of India (NPCI) has asked for the Merchant Discount Rate (MDR) on digital payments to be brought back, sources told Economic Times. Reportedly, the NPCI has sought the intervention of various ministries, including the Prime Minister’s Office (PMO) in the matter.

MDR was a fee collected by banks and levied by merchants processing the transactions. The amount was shared among acquiring bank, fintech partner and issuing bank, with 10% of the amount paid as switching fees to NPCI.

The fee was waived off last year by the government on transactions on the Unified Payments Interface (UPI) network and those done through the RuPay debit card modes. This was done to incentivise small businesses to make a switch to digital payments. But as a result of this move, many UPI apps have been left with very little revenue despite the fact that they have to spend to acquire users and bring back repeat users.

As seen in Inc42’s analysis based on May 2020 figures, UPI apps cumulatively spent over INR 8 Cr in the form of switching fees, just to facilitate transactions for one month with very little in the way of revenue. Google Pay and PhonePe have the biggest net losses for facilitating UPI transactions, after extrapolation of data based on an average UPI ticket size of INR 1,769 for May 2020. 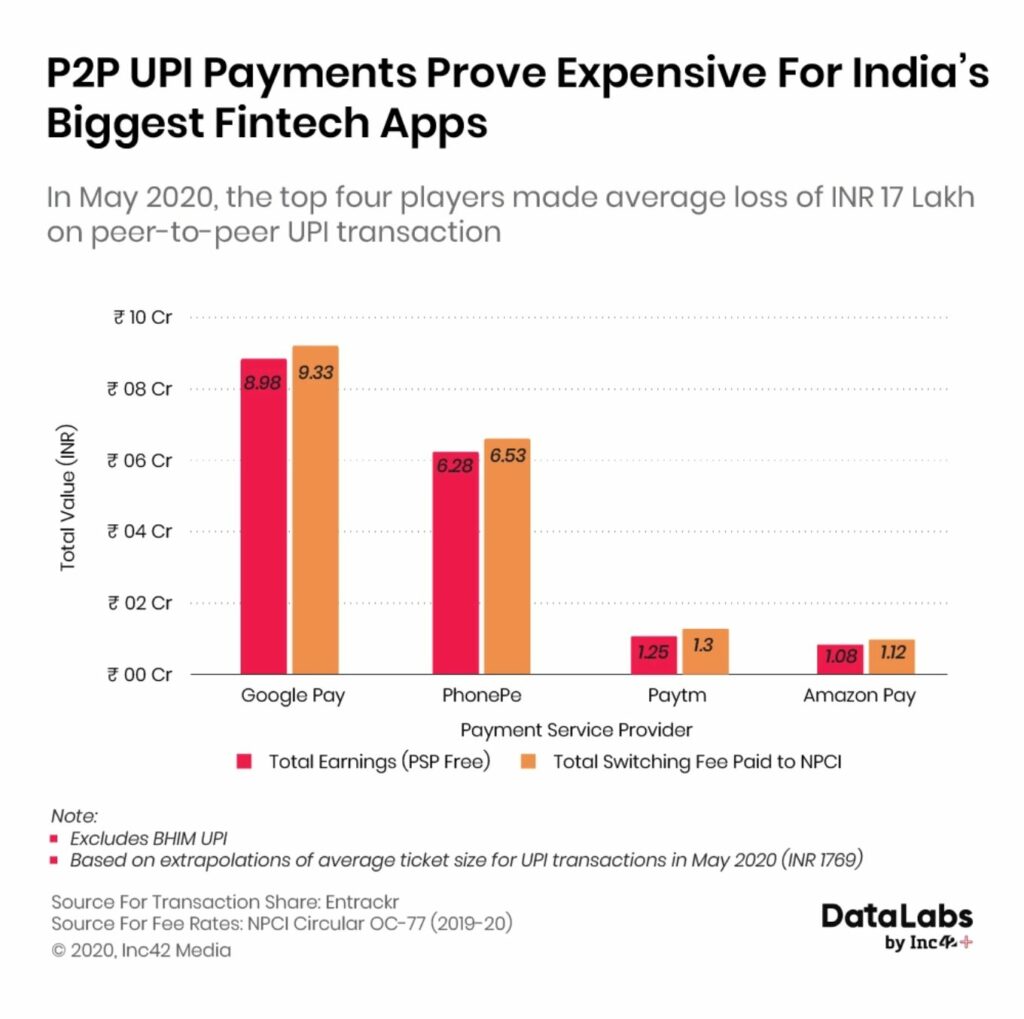 Speaking on the issue, a senior bank executive told Economic Times, “While representations have been made to the highest office on losses incurred by payment operators, it’s highly unlikely that the government would reverse its decision after seeing the way digital payments have grown due to the absence of MDR,”

The push by NPCI for bringing back the MDR comes amid growing concerns that the losses incurred by banks and merchants due to the absence of MDR would slow down the deployment of digital infrastructure needed for the growth of digital payments.

Meanwhile, the NPCI recently launched UPI AutoPay, a feature which enables e-mandate for recurring payments on the UPI network. The new feature allows users to make recurring transactions of up to INR 2,000, while for transactions of amount worth more than INR 2,000, the users would have to enter their UPI Pin each time. The feature, which will ease payment of SIPs, EMIs, subscription fees and other such recurring charges, is expected to help NPCI reach its goal of 1 Bn transactions per day on the UPI network. Besides, NPCI also launched a RuPay business credit card for small businesses and startups. Both products were launched at last week’s Global Fintech Festival (GFF).