Tekie has uploaded a video recording of the session to support its claim; WhiteHat Jr has denied the allegations 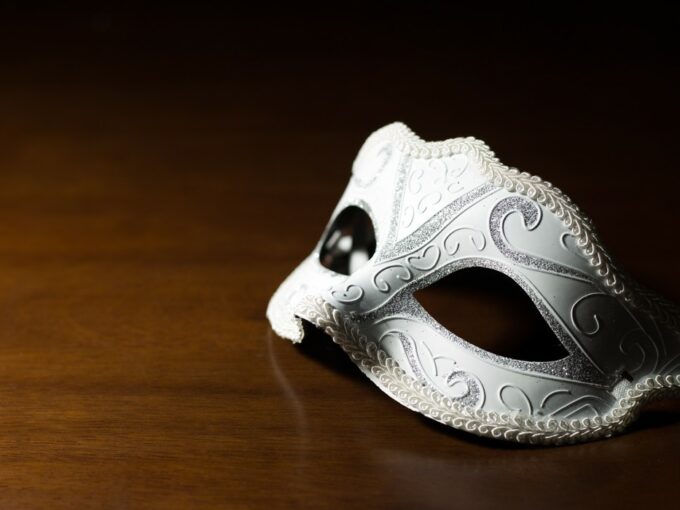 “We encountered a suspicious session, where the student had their camera turned off, and the voice from their side sounded almost like a 30-year-old adult,” Naman Mukund, cofounder of Tekie said in a Linkedin post.

Talking with Inc42, Mukund shared that the referred trial class took place on October 19, 2020 at around 6 PM (IST). The student allegedly said that his camera was not working and continued the session without turning on his video.

Tekie has also shared the video on LinkedIn, that shows the alleged act of impersonation by the WhiteHat Jr. employee. This includes claims like the student was screen-recording the session, an email window with WhiteHat Jr. work email id signed in, and the student responding to two different names (Saurabh and Kavya), among others.

Further, Tekie claims to have called the student from a general number asking if they were speaking to Saurabh from WhiteHat Jr, to which the person replied in the affirmative. According to the company, the person on the other side of the phone had the same voice and way of speaking as in the trial session.

On the call, the Tekie team claimed to be calling from a digital marketing agency and requested to connect with WhiteHat Jr’s digital marketing department. To this, Saurabh had asked the Tekie team to drop him an email, promptly sharing his work email address. Tekie claims to have later discovered that the student was actually a senior employee at WhiteHat Jr, named Saurabh Aswani.

Inc42 has reviewed the screenshot of the referred email screen. However, WhiteHat Jr. denied Tekie’s allegations in response to our queries. A company spokesperson said, “We categorically deny this malicious allegation. WhiteHat Jr has pioneered the coding category in India and remains undisputed leader. We want more and more players to enter the coding arena and help in making this nascent industry grow while creating unprecedented new jobs in India.”

Founded by Anand Verma and Mukund in 2017, the platform had gone live only recently in July 2020. The company had invested three years in creating their teaching module. Tekie is attempting to teach young students the fundamentals of text-based programming, which is to write actual coding language syntax. The biggest differentiating factor for Tekie is their animated educational series and other interactive features built into the platform.

“We welcome WhiteHat Jr and others to reach us directly and try our sessions ethically to understand our approach to education and why we spent three years building the content instead of impersonating and illegally recording them,” said Mukund.

BYJU’S-owned WhiteHat Jr has faced criticism for using its high-profile legal team’s might to ensure that social media posts criticising the company’s alleged unethical practices are taken down. Posts of a software engineer Pradeep Poonia on YouTube, Linkedin and Reddit were taken down by the platforms in the past few months. Also, Mehul Haria, a 12 yr old Youtuber made a similar allegation against WhiteHat Jr for taking down his video.

In addition to this, WhiteHat Jr marketing campaigns have also been in the public eye for using fear marketing tactics and playing on the psyche of the parents. WhiteHat Jr. CEO Karan Bajaj recently acknowledged the criticism of the company’s marketing strategies and assured that they will do better in the future. However, the company has not yet shared any action plan for this change.

In April 2020, a video of a BYJU’S manager abusing an executive for not completing a sale, went viral on social media app reddit. While that video was taken down soon from the social media, in response, BYJU’S said it had fired the manager in question.There have been several allegations against the country’s most valued edtech player in the past, where they have been accused of harbouring a sales culture that forces employees to resort to unethical means.

Oliver Joshua Jacob, who worked as BDA in BYJU’s, took to Linkedin to affirm these practices. “Being an ex-employee of Byjus I can agree that this is how agents are treated. I understand selling is a competitive field. However, this is not acceptable. There is no work-life balance and the treatment received is inhuman. Any self-respecting person cannot suffer in such a toxic environment.” 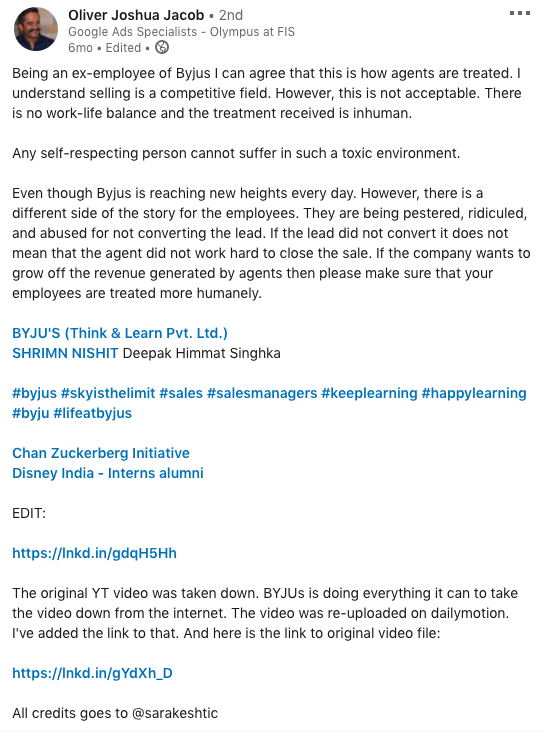 In response to Inc42’s questions on the matter, the company spokesperson said, “We have a transparent system in place, where employees need to mark their daily attendance on ‘Success Factor’ portal which is not dependent on their performance. No tampering can be done with their higher-ups. In case of any unfair practices, we encourage our employees to report it to the HR instantly and all such cases are resolved on priority. We strongly believe that our employees are our biggest asset and we are committed to creating a safe and productive workplace for them.”

The latest incident where an employee of WhiteHat Jr has been accused of using unethical ways to attend and screen-record the teaching module of a rival company puts the company in the dock, once again.

Commenting on the issue, Surya Mantha, senior partner at Unitus Ventures which has invested in edtech startups like Masai School and Cuemath, said, “We strongly believe that the only way to build a sustainable business is to take care of the interests of all stakeholders by keeping ethics front and center at all points in time.”

For any company, employees are their strongest asset, and taking care of them should be the primary DNA of any company for it to be successful in the long-term, he added.

With inputs from Suprita Anupam.