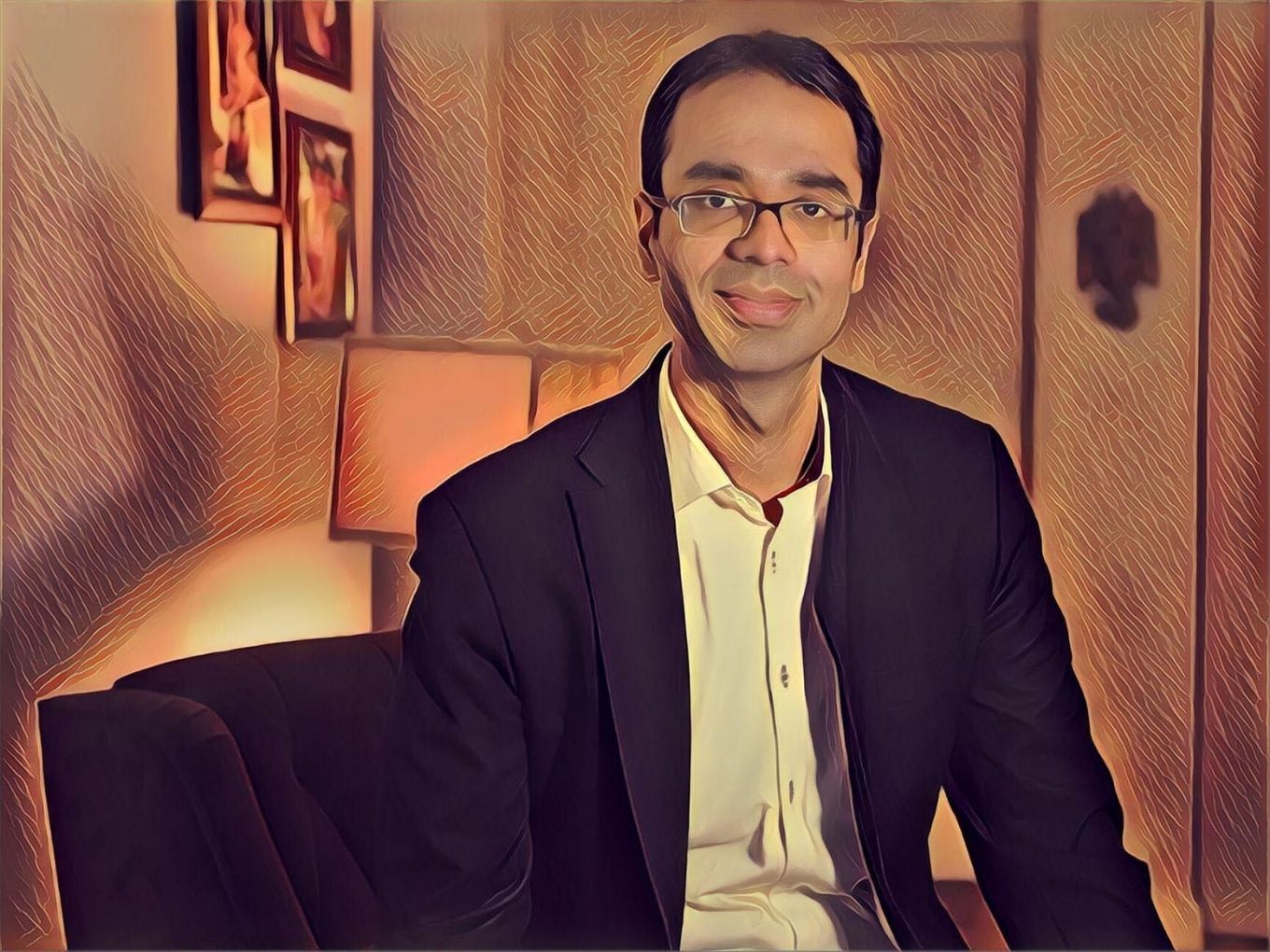 Coding is the new fad in Indian edtech, with BYJU’S, Vedantu, Toppr all adding coding courses for kids

On Thursday, an 18-month-old startup was acquired by BYJU’S in an all-cash deal worth $300 Mn. Even though it is a high value exit, the most interesting part about the WhiteHat Jr acquisition was the claimed $150 Mn annual revenue rate (ARR), which suggests that coding courses are indeed a goldmine for edtech startups.

Founder and CEO Karan Bajaj had told Inc42 in January this year, WhiteHat Jr was growing at 30% – 40% and had clocked about $12 Mn ARR. So what happened in the past five months, that took the revenue run rate from $12 Mn to $150 Mn. The number also attracted some controversy on Twitter as many questioned how WhiteHat Jr got there. Well, here’s the story.

As with many success stories, it’s about choosing the right goals. For WhiteHat, it was the decision to go for a 10x scale in trying circumstances and the launch in the US market which accelerated the overall growth trajectory and opened up the roadmap for future growth in overseas markets.

The startling fact, perhaps, is that much of this journey for WhiteHat was through its barebones MVP (minimum viable product), which was launched in April 2019 and which was its only product till December 2019. After Pranab Dash joined as the CTO in July 2019, WhiteHat Jr began building the current version of its product and launched it in January 2020.

“In February, I said that everything is ready and we want to scale 10x — completely unapologetic and uninhibited scaling. In February and March, our revenue doubled and that’s when the pandemic hit,” WhiteHat CEO Bajaj told Inc42, a day after the BYJU’S acquisition.

Of course, 2020 had other plans. With an ambitious target set in February, by the time it was April, Bajaj was forced to wonder whether WhiteHat should pull back its scaling-up plans and wait for the full team to return to the office. But soon as remote work became the new reality for most startups, WhiteHat resumed hiring for operations, teachers and the sales staff, and doubled down on the scale-up track.

From 1,000 teachers in February, WhiteHat now has 5,000 teachers taking classes all over the world. This focus on scaling up despite the challenges has been a key factor in the revenue growth given the focus on the US market.

Covid-19 and the lockdown forced many new users to take up online coding courses. How much did that help WhiteHat Jr in this interim, in terms of adoption?

Bajaj does not think that number of new users is a significant metric as the only thing that matters in a business is the growth in paying customers. While WhiteHat’s conversion percentage has come down since Covid-19 because of financial concerns among consumers, the number of people actively taking classes was higher. Bajaj clarified, “For instance if 60% people used to show up for a class booking before Covid-19, that number went up to 65% after the pandemic. So the net effect of Covid is fairly neutral for a business like ours.”

While many are of the belief that the pandemic and the lockdown helped edtech startups accelerate growth in the past few months, Bajaj believes that the Covid-19 impact was overhyped to a certain extent.

Even before the acquisition by BYJU’S, WhiteHat Jr was the talk of the town thanks to its viral ads. The company grabbed eyeballs with its “Wolf Gupta” campaign, which focussed on a 13-year-old who took an AI-focussed course on WhiteHat and ended up earning an INR 20 Cr salary package with Google.

This ad hit the right chords with the Indian parents and one does wonder whether this cheeky messaging has something to do with the uptick in customer registrations. Bajaj thinks these ads are just the top of the funnel solutions, but what really works for the company is the dedicated website that each student gets, which can be easily shared with others. This makes using WhiteHat more than just about learning, it adds an aspirational touch to the whole thing.

“Surprisingly enough I would say, 60%-65% of business in India is coming from word of mouth. Parents want to tell other people that their kids are building something and be appreciated by them,” he added.  In the US too, the parents’ aspiration of sharing their kids’ successes has been a significant driver for sales.

Until yesterday, WhiteHat’s customer acquisition strategy was limited to just digital ads and word-of-mouth. It’s only after the acquisition that it is considering experimenting with TV ads. While we were not told the net customer acquisition cost, according to our sources, WhiteHat was spending about $119 per user in India (as of March 2020) and a similar $117 per user in the US. This, however, does not account for expenses incurred in branding activities and long-term user testing.

In a short span, WhiteHat Jr raised $11 Mn in funding from Omidyar, Owl Ventures and Nexus Venture Partners. It was also in talks to raise $50 Mn at a valuation of around $350 Mn. Bajaj claims that all of this funding was kept away in the bank as the focus was on running the business at profitability and with minimal cash spending. All three investors have gotten a straight exit after the acquisition.

“Month-on-month, we have generated enough cash flow that we have covered the entire funding that we have raised, plus we had more. We had $18 Mn in the bank before the BYJU’S acquisition,” said Bajaj.

Further, a large portion of WhiteHat’s revenue is said to be driven by renewals which make about 30%-40% (on average) of the whole revenue pool. Explaining the reasoning behind it Bajaj said that new users tend to buy a 48 classes package in the beginning and then the next purchase is usually of a 100 classes package.

The company claims to have a customer return rate of 80%, making renewals a significant component of WhiteHat’s revenue growth.

With healthy cash flow, the question then is, why get acquired by BYJU’s?

“This is the first time India has created a category for the world, a true good B2C category from India. I want to take this category to every major market like Brazil, South America, US, Europe and create 1000s of teaching jobs in India,” Bajaj claimed.

WhiteHat Jr teachers are said to be making more than IITians/IIM MBAs make because of the growth in global demand. To achieve this vision of entering major markets, startups can either work alone and take the long road, or partner with a bigger player to get there faster. Bajaj believes BYJU’S shares a boundaryless vision of the world like WhiteHat. It also has much more expertise in edtech and allows WhiteHat Jr to add new categories such as math, without going back to the drawing board.

“I felt that there is nothing that I can do alone, that I cannot do better with the expertise of BYJU’S. It was a no brainer, I decided within a day. Also, I have had my 4-5 minutes of fame, now what I am really after is the impact of things,” said Bajaj.

And like that in a matter of six weeks, WhiteHat Jr became the fifth largest venture exit in the Indian startup ecosystem and the first major one in edtech, besides low-value acquisitions.

Growing In India Vs The US

Clearly, the more mature US market has been a significant piece in WhiteHat Jr’s growth story Besides the larger addressable market opportunity in the US ($26 Bn) which is more than twice as large as India ($11 Bn), the average revenue per user is also higher in the US, because of the higher spending capacity. 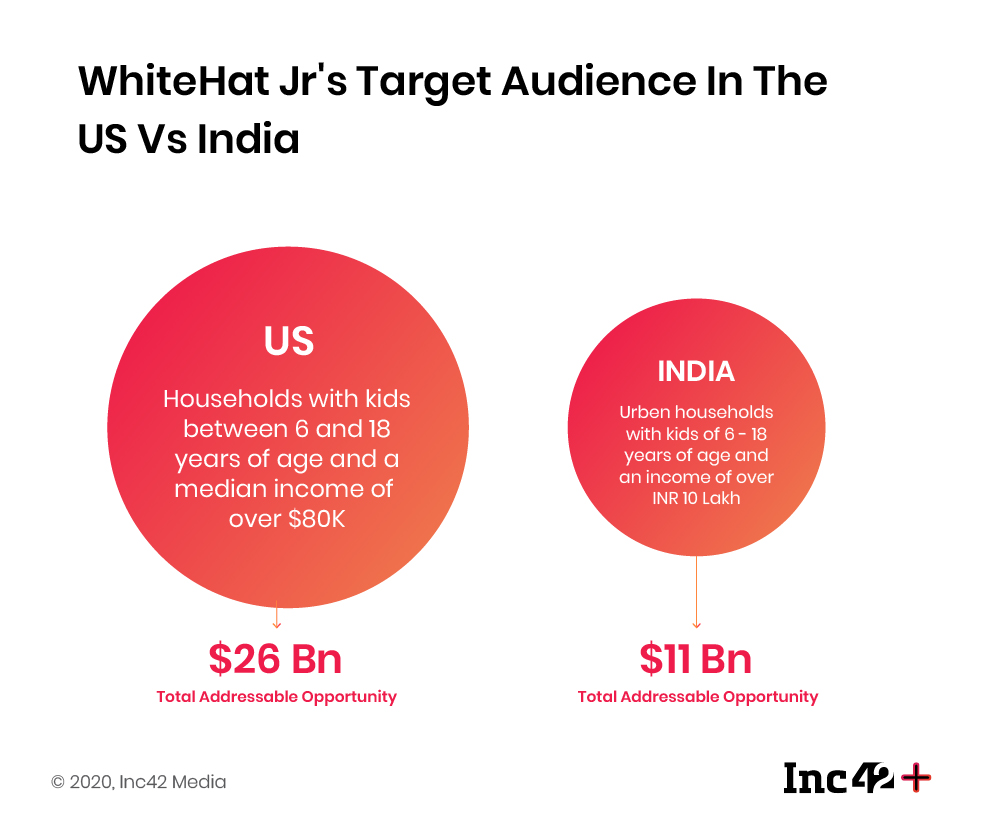 At the moment, India contributes 45% of the overall revenue, while the US makes up the rest. But in terms of the number of users, India makes up 65% of WhiteHat’s user base, which goes to highlight the disparity in average revenue per user from India and 35% from the US.

WhiteHat Jr courses are priced around $9 per class for each student. In comparison, its US-based competitor Coding with Kids has charges about $23 to $28 per class.

“I see this as a boundaryless world, I have always believed that the same product will work in all the markets because it is a very robust product and it was getting great traction in India,” said Bajaj.

So WhiteHat’s product is pretty much the same in India and the US. The only thing that’s changed is that even first grade kids in the US were very comfortable with laptops and digital gadgets, so the company accelerated some of its early grade courses. Interestingly, all teachers on the platform even in the US are Indian.

WhitHat Jr is running a completely global marketplace where teachers are from India but students come from any part of the world. A teacher can schedule classes in any time slot in a 24-hour span and there are many that prefer night classes because they have more free time after their kids sleep. With success in the US, now WhiteHat Jr is looking to expand to similar markets such as the UK, Australia and New Zealand.

However, WhiteHat’s growing focus on global markets does not mean that Indian market does not have that depth. Just last month, the Indian market saw a 90% growth for WhiteHat. Further, the platform has regional languages built into the architecture from day one. WhiteHat’s algorithm maps all teachers and students using location and language-based matching to ensure that a teacher in Tamil Nadu connects with a student who is familiar with Tamil.

Is Coding The Holy Grail In Edtech?

Till date, WhiteHat Jr claims to have introduced 3 Mn kids to coding, and currently conducts 20K live classes per day taught by 5,000 teachers. But the market is huge and there’s room for competitors to grow and find a niche too.

Specialist startups such as Camp K12 and Codevidhya made some inroads into the market. Recently, other edtech players such as Toppr, Vedantu, Coding Ninjas have also added kids-focussed coding solutions to their portfolio. With WhiteHat Jr’s acquisition, BYJU’S has joined the slew of companies adding kids-focussed coding offerings.

WhiteHat Jr is very similar to BYJU’S in terms of its high growth trajectory and being more revenue positive. The deal clearly provides a huge launchpad for WhiteHat to scale up in overseas territories and further accelerate its growth journey. Both BYJU’S and WhiteHat also dominate the market and are among the top edtech startups by ARR, with the likes of Unacademy ($30 Mn ARR in Feb 2020) trailing these two pacesetters. WhiteHat is now also planning to add another product soon and Bajaj plans to lead it. He added he will be sticking around for at least the next three years to build the next generation of products.

As a bestselling author and yoga practitioner, Bajaj is always looking to increase his competence as an entrepreneur.  “Like any entrepreneur, I am a restless individual but yoga has helped me to stay slightly more balanced and it also makes me very calm,” he said.

Correction Note | 13:37, August 13, 2020
The bars in “Fastest Growing Business In India’s Edtech History” graph were readjusted to accurately represent the number of months taken by each company in reaching $1 Mn ARR.
facebooktwitterwhatsapp