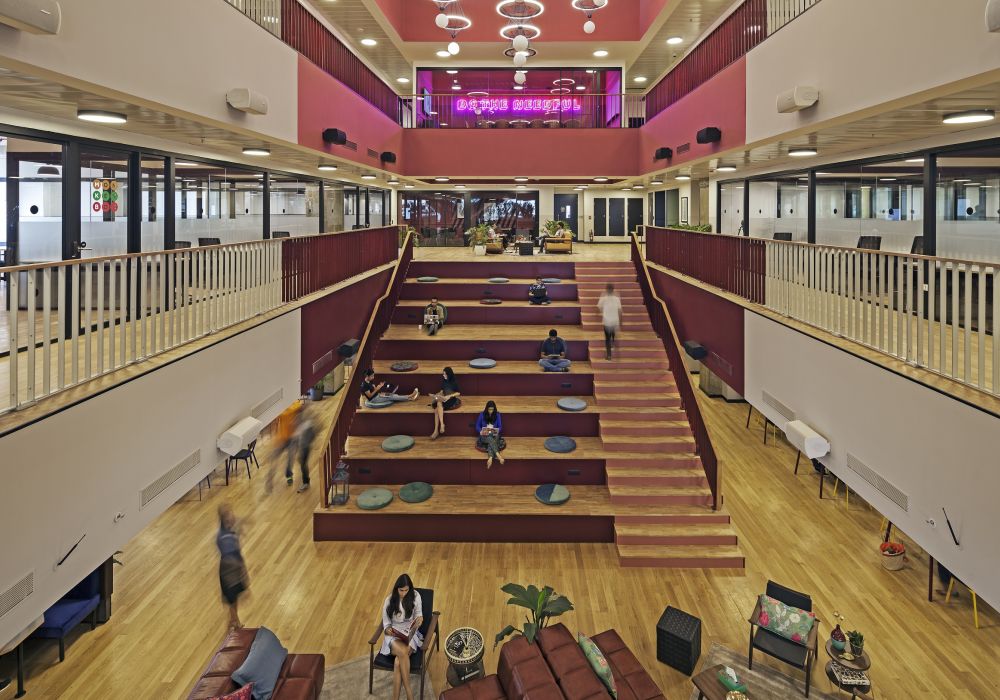 New York-headquartered coworking space provider WeWork has unveiled its sixth workspace in India – WeWork Bristol Chowk. Strategically located at crossroads between the MG Road and Golf Course Road in Gurugram, the new facility has been launched less than a month after WeWork India opened its second location in Mumbai, called WeWork Marol.

The community space is targeted at startups, freelancers, and large corporates across different sectors that want to make use of its flexible offerings.

Spread over five floors, this location of WeWork houses a collaborative workspace, private offices and conference rooms, apart from a host of other features such as phone booths, game room, wellness room, casual meeting spaces, etc.

Commenting on the launch, Karan Virwani, General Manager of WeWork India told Inc42, “Gurugram is known as a corporate and financial hub. A lot of people do live in Gurugram itself, but there are also plenty of people that commute from elsewhere, which is why being right next to the metro station is a huge plus point.”

It is also easily accessible from Cyber Hub, Cyber City as well as various MNCs and startups. “With WeWork Bristol Chowk, we aim to strengthen the startup ecosystem by bringing together a network of entrepreneurs and industry leaders,” Virwani further averred. 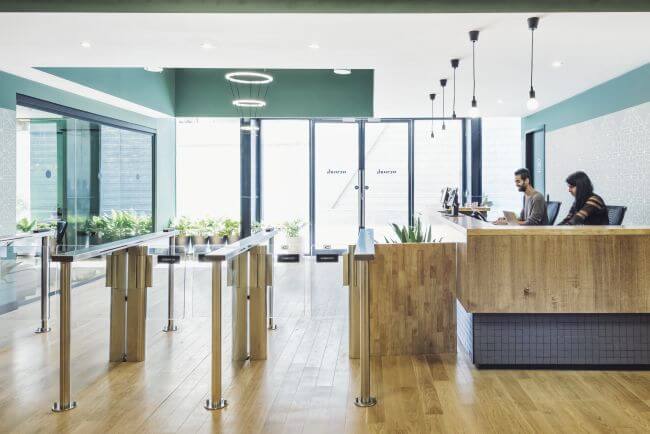 Directly across from Hotel Bristol, this WeWork Gurugram location occupies five floors in the Salcon Platina Tower. Stepping inside, clients are greeted at an expansive atrium on the ground floor, while a spiral staircase takes them up to the conference rooms, private offices, and lounges upstairs.

There are other amenities too, such as micro-roasted coffee machines, private calling stations (or phone booths), wellness room, game room, mail room, fully stocked pantries, fruit/water dispenser and even, beer on tap!

There are also separate lounges for members to unwind and hold meetings in a somewhat casual setting.

How WeWork Is Alleviating The Global Problem Of Office Space Crunch

Founded in 2010 by Adam Neumann and Miguel Mckelvey, WeWork today has 212 physical locations in 66 cities across 20 countries. According to an official statement, the SoftBank-backed company aims to create “a world where people work to make a life, not just a living”.

Over the last few years, WeWork has been adding approximately 10 to 15 locations per month, the world over. It counts Microsoft, Bacardi and Samsung, among others, as its client members.

The coworking space provider claims to have doubled its member base to more than 200K globally.

Shedding light on the company’s core ethos, Virwani told Inc42, “Our locations help companies of all sizes with an opportunity to collaborate through refreshing design, engaging community, and added benefits.”

“Today, we are not only building workspaces, but enabling entrepreneurial stories in India. WeWork is well known for providing its members with a platform to build community through collaborative workspaces and the in-house events regularly help nurture a strong team culture and grow business,” he further stated.

An Overview Of WeWork’s India Adventure

WeWork launched in India last July with WeWork Galaxy in Bengaluru that caters to 2200 members, followed by WeWork BKC in Mumbai. WeWork then strengthened in presence in Bengaluru by opening two more spaces in Bengaluru – WeWork EGL and WeWork Koramangala. 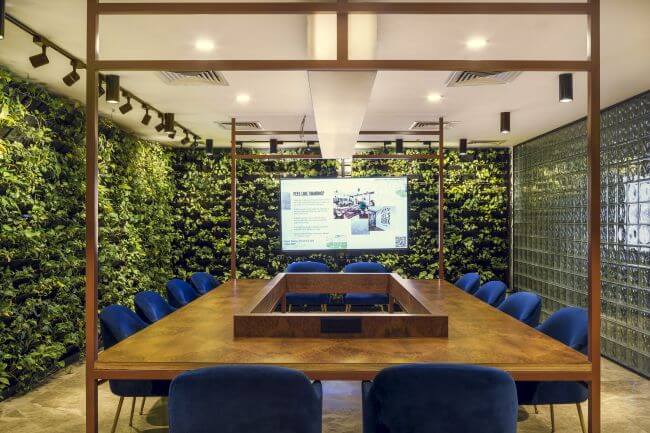 This was followed by the recent opening of the second location in Mumbai – WeWork Marol. This facility, according to Virwani, signifies an important milestone for WeWork as it added a total of 670+ desks spaces tailored to SMEs and large enterprises.

Speaking on the company’s India bet, Virwani said, “India is emerging as one of the biggest markets in the world for entrepreneurs, from start-ups to enterprises. And there is a demand for workspaces to transform from the traditional and hierarchical setup to an open and community focused setup. WeWork is providing a solution that bends and flexes to a company’s needs, regardless of size or infrastructure.”

WeWork India’s philosophy is all about catering to the modern worker who has grown up understanding the value of the shared economy (Uber, Airbnb etc.), is constantly mobile and not stuck to a particular work environment, as per Karan.

A Glimpse Of The Future Roadmap

While the business end of the deal was relatively smooth, WeWork India did face its share of challenges. The first and foremost among them was building a robust local team.

Elaborating further, the WeWork India GM said, “While we’re a global company, we operate with a local playbook. Wherever we enter a new market, we work together with key partners and experts to help create the WeWork experience in that region.”

Another major hurdle for the company was making people understand that WeWork India is not ‘JUST’ a coworking space provider. As shared by Karan, “We are not a coworking space, where everyone shares the Internet and a bunch of common entities work together. We are so much more than a workspace, providing not only space but a community that helps you thrive personally and professionally.”

On the company’s future plans, Virwani said that WeWork India is working on a new strategy to meet the needs of creators in this market, while helping members’ businesses grow and succeed, and supporting the creators in India to explore global resources and partners. 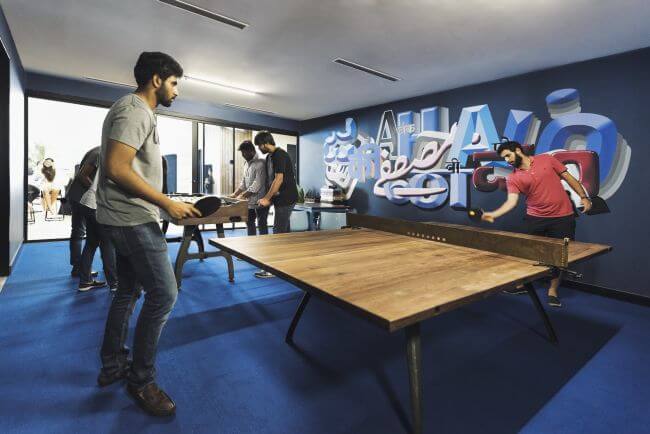 He further stated, “Right now, we are focused on launching WeWork Bristol Chowk in Gurugram successfully and making sure that the initial round of members are having a pleasant experience. Following this, we plan to further strengthen our presence in Bangalore, Mumbai, and Delhi/NCR over the next one year. Post this, we plan to expand to other cities.”

More Than Just A Coworking Space

According to Karan Virwani, WeWork provides an entire platform to support the people and their businesses. This includes well-designed spaces to ‘work’, a community to collaborate with, and we provide services you didn’t know you needed.

On how it scores over other coworking spaces currently operating in the country, he explained, “We solve all your logistical headaches allowing you to concentrate on your work. What sets us apart is how we stress on being better together by bringing back human connection.”

Karan added, “We are humanising work by reintroducing face-to-face collaboration, inspiration, and generosity into our global network of spaces every day. WeWork is redefining success as measured by personal fulfilment. There has been a macro shift toward a new way of work – one focused on meaningful connections.”

WeWork enables companies to grow together in the local communities of each building, and in the global community of the member network, claimed Virwani.

The company aims to offer a physical and digital experience that connects each individual hub to its over 200K+ global member community. It does so through the WeWork app, which allows members to build relationships irrespective of their geographical location.

With India poised to become home to 10,500 tech startups by 2020, the concept of coworking spaces is slowly gaining traction in the startup ecosystem. Given that majority of startups don’t have enough funds to rent a full-fledged office, especially in major cities where real estate prices have skyrocketed in recent times, coworking spaces offer them a cost-effective solution.

Coworking spaces in metro cities, especially, provide a sense of support, infrastructure, networking opportunities as well as outsource office facilities for entrepreneurs who are just starting out.

Concurrent with this demand, a number of coworking spaces have been launched across the country in recent months. Among them are Garage by JetSynthesys, Unigrowth Centre by White Unicorn Ventures, 91springboard, Innov8, Awfis, BHIVE Workspace,  InstaOffice, Bangalore Alpha Lab, Investopad, FundTonic Co-Works and others.

The key drivers of coworking spaces in India are predominantly – cost, infrastructure and networking opportunities. Today, coworking spaces are being availed by startups, professional freelancers, staff at emerging businesses as well as large corporate office employees.

In total, there are now more than 100 coworking spaces in India currently. Fundings in this space have also undergone a significant increase in recent months. As per a study by real estate consultancy Jones Lang LaSalle (JLL), the coworking industry in India will likely attract more than $400 Mn investments by 2018.

As per Inc42 DataLabs, till date, funds have already been infused in this segment from marquee investors like Sequoia Capital, Y Combinator, 500 Startups, Blume Ventures and Anthill Ventures.

While, on the one hand, it spells increased competition for WeWork, the sector’s recent growth also highlights its enormous market opportunity. With a global member community of 200K+, WeWork India seems to be in a strong position to emerge as the champion in the fast-evolving coworking space segment.