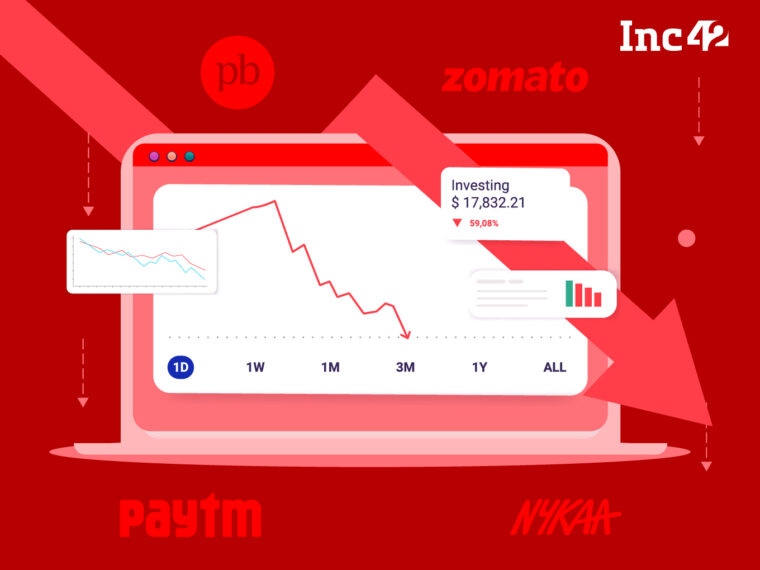 Nykaa declined over 2%, while shares of PB Fintech also fell by over 5%

Benchmark indices plunged on Thursday (May 19) amid weak global cues and fears over rising inflation, leading to a rout in new-age tech stocks as well. Zomato, Nykaa, Paytm, and PB Fintech fell up to 6% during the day.

Shares of foodtech startup Zomato, which have been under pressure recently, continued the downward spiral. The stock fell 5.87% to INR 55.35 on the BSE.

Shares of Zomato have declined nearly 31% in the last one month. From a record high of INR 169.10 in November last year, the stock has fallen by 67% in the last five months.

Shares of beauty marketplace  Nykaa fell 2.15% to settle at INR 1,466.55 on Thursday. Nykaa too has been witnessing investors’ wrath, having lost more than 19% of its market value in the last one month. From a record high of INR 2,574 in November last year, the stock fell to a record low of INR 1,208.40 last week, pointing to the overall negative market sentiment.

Fintech giant Paytm’s shares fell 5.76% to INR 553.75. The shares of the startup have been falling along with that of other new-age tech startups over the last one month or so. The recent development of Chinese investors of its arm Paytm Mall exiting the company has further added to its woes.

Paytm Mall’s valuation reportedly tumbled from $3 Bn to $13 Mn in a span of three years after Jack Ma sold his entire 43% stake in the company for a mere INR 42 crore.

As central banks across the world tighten policy rates amidst the rise in inflation, investors have become risk averse. India is no exception, and the new-age tech stocks are facing the brunt of this negative sentiment as investors are worried about the lack of profitability of many of these startups.

Bloodbath ensued on the Dalal Street on Thursday as Sensex nosedived 2.61% to settle at 52,792.23. The intense selloff wiped off INR 6.71 Lakh Cr of investors’ wealth over the course of the day.

The volatility index also surged to a two-month high of more than 10%.