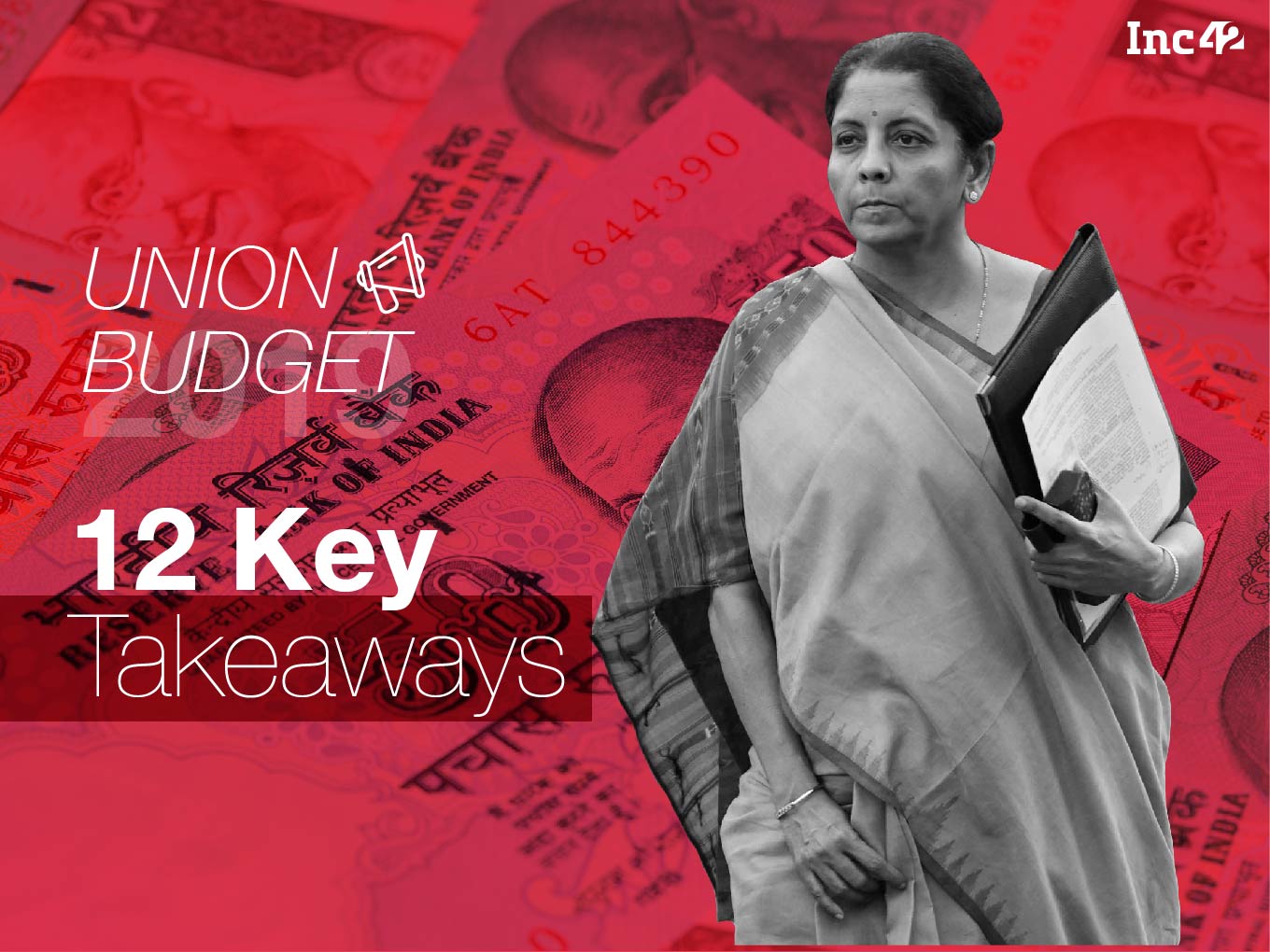 To start reskilling programmes in deeptech such as AI, blockchain and big data

This was truer in the case of startups than any other sector. While the outgoing government shocked many in the Indian startup ecosystem with almost negligible provisions for startups, Modi 2.0’s first budget is littered with startup-friendly measures including a much-awaited clarity on the issue of Angel Tax — in a spirit similar to the initiatives like the Startup India and the startup-focused Fund of Funds during Modi 1.0 reign.

In her two hours fifteen minute long budget, Sitharaman said that to resolve the issue of Angel Tax, startups and investors who file requisite declarations will not be subjected to any kind of scrutiny in respect of valuation of share premium.

A mechanism of e-verification will be put in place and with this, the funds raised by startups will not require any tax scrutiny, she added.

Here Are The Key Highlights From India’s 89th Union Budget

India will target to become a $3 Tn economy in FY20, Sitharaman said. To this end, the finance minister said that her primary focus would be on making regulatory changes to kickstart domestic and foreign investment.

To make India a more desirable FDI destination, Sitharaman said that the government will examine suggestions of further opening up of FDI in aviation, media (animation, AVGC) and insurance sectors in consultation with all stakeholders.

In addition, local sourcing norms will be eased for FDI in Single Brand Retail sector —  a long-running issue for foreign companies like Apple and IKEA.

India is currently the world’s sixth largest automotive hub. With manufacturing plants set up by the biggest brands such as Hyundai, Volkswagen, Kia, Ford and Tata. The country however also ranks ahead of any other country in terms of air pollution in urban centres — with 14 of the most polluted cities in the world located in India.

With the new budget, Sitharaman said that the inclusion of solar storage batteries and charging infrastructure in the FAME scheme will give a boost to manufacturing, which is needed for India to leapfrog and become a global hub for manufacturing of these vehicles.

On the consumption side, to make electric vehicles affordable to consumers, the Union Budget says the government will provide additional income tax deduction of INR 1.5 Lakh on the interest paid on loans taken to purchase electric vehicles. To further incentivise emobility, customs duty is being exempted on certain parts of electric vehicles.

With the call of “Nari Tu Narayani”, Sitharaman proposed to expand the Women Self Help Group’sinterest subvention programme to all districts. For every verified woman SHG member having a Jan Dhan Bank Account, an overdraft of INR 5,000 shall be allowed. One woman in every SHG will also be made eligible for a loan up to INR 1 Lakh under the MUDRA Scheme.

Union Budget 2019 For Women: The Highs And The Lows

To prepare our youth to also take up jobs overseas, we will increase focus on skill sets needed abroad including language training. The government will also lay focus on new-age skills like Artificial Intelligence (AI), Internet of Things, Big Data, 3D Printing, Virtual Reality and Robotics, which are valued highly both within and outside the country, and offer much higher remuneration, Sitaraman said.

A big part of today’s budget outlined how the government will invest in further improving India’s many ongoing road, air and port projects. To this end, Sitharaman outlined a number of measures to enhance the sources of capital for infrastructure financing. She proposed a Credit Guarantee Enhancement Corporation to be set up in 2019-20 along with an action plan to deepen the market for long term bonds to be put in place.

The Finance Minister further said that we recognise that investment-driven growth requires access to low-cost capital. It is estimated that India requires investments averaging INR 20 Lakh Cr every year ($300 Bn a year).

Apart from much needed-relief from Angel Tax, the finance minister said that tax assessors should not face any harassment. Existing infrastructure includes a lot of personal interaction. A scheme of facial assessment in electronic mode, involving no human interaction, will be introduced in a phased manner, she said

In cases of pending assessments of startups and redressal of their grievances, it will be ensured that no inquiry or verification in such cases can be carried out by the Assessing Officer without obtaining approval of his supervisory officer.

The government also proposed to make Aadhaar card and PAN card interchangeable to make it more seamless for people to pay their taxes. During the budget, Sitharaman also stated that the government will also consider issuing Aadhaar Card for Non-Resident Indians with Indian Passports after their arrival in India without waiting for 180 days.

A Further Step Towards A Less-Cash Economy

While not as earth-shattering as 2016, demonetisation move, Sitharaman snuck in a clause which could have widespread effects on the flow of cash in the country. To discourage the practice of making business payments in cash, Sitharaman proposed a levy of 2% on cash withdrawal exceeding INR 1 Cr in a year from a bank account.

She also said that business establishments with annual turnover more than INR 50 Cr shall offer digital modes of payment to their customers for free and no Merchant Discount Rate shall be imposed on customers as well as merchants. The RBI and banks will absorb these costs, she said.