Housing.com has been making a lot of rounds in the media over the past few weeks now. First was for the infamous incident where its co-founder Advitiya Sharma was part of an accident leading to the death of 2 Housing.com employees, followed by then coming out in an all new avatar this holi.

Yet there has been another development where Housing’s name has come up in a post on Quora.

We came across a post on Quora which has a snapshot of the mail sent by Rahul Yadav, CEO of Housing.com to Shailendra Singh of Sequoia Capital, with some serious allegations against the latter.

Here is a snapshot of the mail: 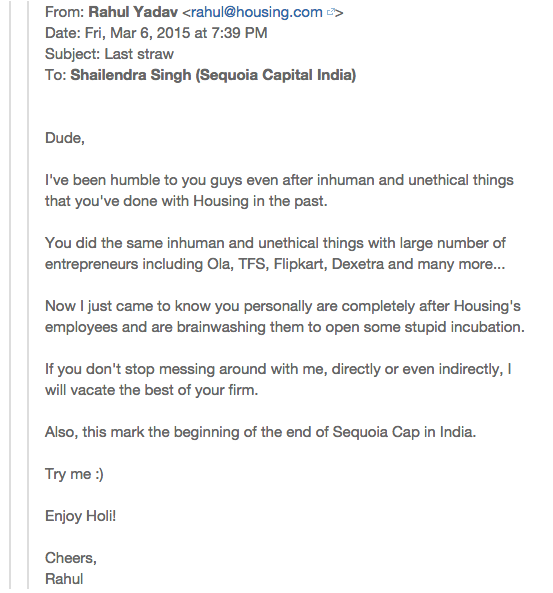 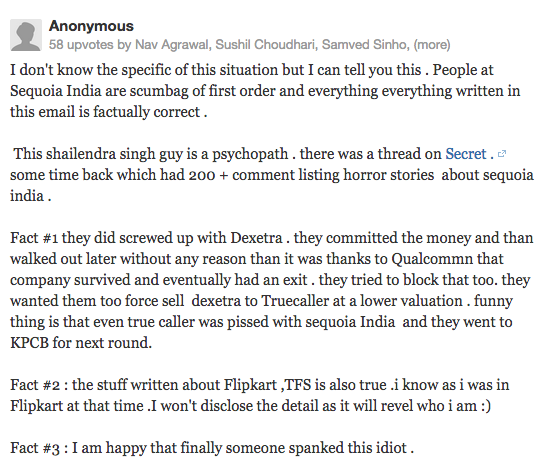 We decided to reach out to both Rahul and Shailendra to find out more about the context of the email.

While our mail, sent to Rahul, didn’t elicit any response, Shailendra replied back stating:

We again tried reaching out to Shailendra to find out about “whether or not the mail was ever sent to him”, because we felt that the mail which was posted has something serious that Rahul was talking out. We got reply stating:

“Our response is available on quora at this time. You can check it online”

Here is what Shailendra responded with on Quora:

I am deeply hurt by this e-mail. I received this at 10 pm last weekend when I was in Hong Kong with the rest of our global partnership, and it came as a surprise and a big disappointment. My best guess is that this mail has been triggered by an offer that we made to one of the Housing employes to join us as an analyst. Here is some more context – based on feedback from entrepreneurs in India, we decided to expand our analyst pool to include younger team members who have start–up experience. During this recruiting exercise, we evaluated over 100 candidates from multiple companies and geographies, and I personally met about a dozen of them, including two housing employees, whom I spent an hour each with. We made an offer to one of them, and he decided to join us.

While these are the facts, I would still like to use this opportunity to talk about something larger and close to my heart – how will we all work together to create a better start-up ecosystem in india? During my career in the valley, what stood out is a feeling of community – amongst entrepreneurs, employees, and investors – and a sense of professionalism, not personalizing the competition between funds or individuals, and having a drink together in the evening. For us, that means not being vindictive and petty and instead being collaborative with the ecosystem – to focus on what matters in the long term. While I don’t know Rahul well personally, and have only met him 1-1 once, I felt incredibly nice to read a recent article about how Housing has been one of the most active breeding grounds for new startups.  At Sequoia, we consider it a privilege to do what we do   –  and be trusted by some of the best and brightest entrepreneurs, not just to be in their cap table, but to have a seat around the table to help set direction for their companies. We take our role very seriously, and we are deeply committed to our portfolio companies and their teams. Honestly, we have neither time nor intention to do anything else, let alone target a company we have no ownership in.

Finally, I want to also make it clear to all the trolls who are bound to jump on this – I will not respond to anything you have to say as long as you hide behind the cowardly façade of anonymity. We are incredibly fortunate to work at Sequoia, proud of our entrepreneurs, our track record, and our team and their professional accomplishments, and we look forward to continuing to work closely with the current and next several generations of entrepreneurs. I encourage people who have questions or concerns about any of this to reach out to me directly. Or even better, talk to any of the entrepreneurs we are privileged to be partners with.

I wish the housing team and Rahul good luck.

There have been numerous allegations against Sequoia over various “anonymous” forums like Quora, Secret, etc.

Now the point is, if the reasons stated by Shailendra are true, then we don’t understand what is the “Unethical” thing about this. Meeting entrepreneurs, investors, employees on drinks is a common practice, and calling it unethical doesn’t sound cool at all, unless the situation described by Shailendra is not true or there is a backstory behind this mail. Rahul’s response is still awaited.

Post publishing this story, Rahul replied to the response shared by Shailendra: 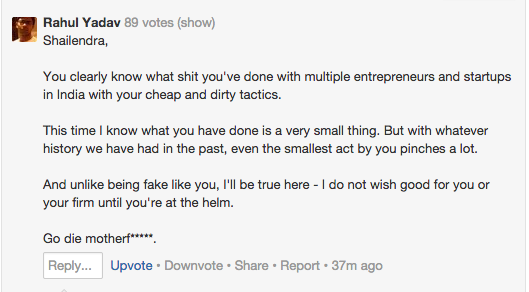