#TheInc42Show: Will Digital-First Brands Thrive Alone Or Will They Need The Omnichannel Touch?

#TheInc42Show: Will Digital-First Brands Thrive Alone Or Will They Need The Omnichannel Touch?

100x.VC's Sanjay Mehta emphasises that the journey of customers will begin and end digitally

The panellists discuss the incumbents and their experiments with digital 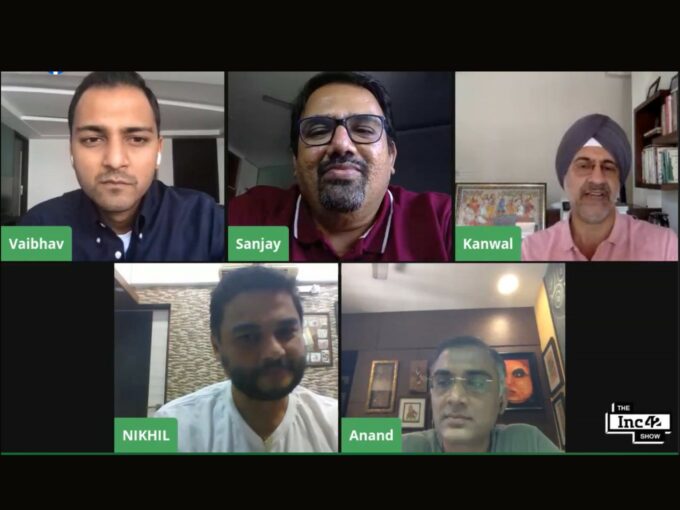 The Covid-19 crisis has created concerns around the primary sense of touch — because of the risk of getting infected — be it at a grocery store or an ecommerce delivery at home. As consumers focus on what’s essential, it’s going to take digital non-essential brands a lot of effort to get consumers to open up their wallets. Combine it with the trust deficit that digital brands face from Indian consumers, and you have a series of challenges for brands to overcome. At the same time, competition, investors and questions on survival have further pushed these brands to review their strategies or pivot.

But is it the time for digital brands to weave in retail presence to bring in the touch and feel experience of buying a physical product or can digital-first brands continue to work on touch-me-not and buy-me-now model?

These major investors from the Indian consumer space came with varied opinions on the topic of brands going digital. While Mehta and Lunia argued that brands need to shed all physical presence, Vora and Singh said the need for physical touchpoints will increase in the future.

Mehta said that he believes the journey of consumers will begin and end digitally, and digital-first is going to be the future. Lunia agreed saying that it is not only brands going digital, but also the mindset behind it — how the founders think, how the investors think.

“It is the mindset where a company will do whatever it takes, all the best technologies, internet media, non-internet media, to give you the best experience, which is personalised, customised and really suited to you,” Lunia added.

Vora, on the other hand, believes that no brand can really exist without having an extremely strong connect with consumers, which is strongest in the offline world. “Earlier physical and digital were different, I think it will get merged, so I think there are opportunities but also challenges for both digital-only and physical-only brands,” he added.

Singh tops it off saying that the whole belief system is that digital-first or digital brands are fulfilling some very specific needs and white spaces in the market, but more brands will become increasingly interested in physical distribution system because they are getting digitally powered. “My view is that digital-only isn’t the debate, it is to what extent do you want to go digital,” Fireside’s Singh added.

One of the biggest questions these days is what makes a brand digital-first? The digital realm is in constant evolution, and every 3-5 years things change in this world and brands also have to adjust to these shifting goalposts. It’s not just about selling online through Amazon or through a dedicated portal, but about adapting to the changing digital consumer, the distribution models, the discovery platforms and more. The reach and effectiveness of messaging is determined by how brands adapt to this.

“Frankly, it really is just another alternate layer, which has evolved in a country like India, which has seen almost nothing happen in consumer businesses for the last 70 years, I think it’s the first form of change in technology,” Sixth Sense Ventures’ Vora said,


Vora noted that the idea is to find what will create more steady moat over a period of time, which he thinks would be easier for digital-first brands as it doesn’t really take too much of capital. “I think in this scenario you will see a lot of strong brands, strong businesses, who have been very strong traditionally in distribution, be relevant. And they will be a flux of newer entrant, who will be digital, not because of the choice, but because that’s the only option that they have,” Vora argued.


100X.VC’s Mehta also believes it’s not just about distribution, but about origination— which, in short, means brands should start and end digitally and their entire process is tech-driven with very few traditional operational models. “It is that technology or the digital-first mindset which is going to drive the future,” he adds.

Fireside Ventures’ Singh says that there is a great opportunity for digital brands but will they not dominate. Firstly, the consumption patterns of the broad mass of consumers will not suddenly shift to 100% online or digital medium, so in the short term traditional brands may get away without a deep digital ethos. Existing large players are recognizing the value of being digitally engaged, digitally savvy and will adopt the digital way as a part of their overall business model.

Is Omnichannel Going To Fade Away?

“We may say we will go back into our original way of living life, this crisis has changed so many things, the markets have dislocated consumer behaviour change, we are already seeing across and that will leave a lasting impression. We are a digital native young nation and quite a lot of the consumer behaviour change which is coming across with this whole crisis,” – Sanjay Mehta


Mehta says that on the services side, digital-first is the only way out and the old traditional brands are going to die out in 5-10 years.  On the product side, the journey where you have zero-touch or low touch engagement is going to be the first of what will happen across now. Similarly, Singh pointed out that incumbent brands becoming digitally smarter is probably going to be an even bigger opportunity.

“I would totally defend the fact that companies are in HUL, Nestle Proctor etc is not going to die in the next highest 7-10 or even 20 years. I think they need to reinvent themselves in adopting a digital way of life,” he added

It will be important for brands to react to infrastructural developments and online shifts as a way of life and how they enable engagement for consumers. “Digital is not only commerce or a channel. Digital is also engagement and a brand-building platform,” Singh said emphatically.


For Vora, the point is not that convergence will happen, but that consumers will change their way of buying. He gives the example of ecommerce or pharmacies not being able to leverage the current crisis to turn profitable and fulfil customer demands. “While incremental changes will happen, it is not as drastic to call for a complete overhaul of the way businesses function in the need for a digital-first plan to become the only sure thing to do.”


Giving an example of omnichannel presence, Singh said that Fireside portfolio company Sarva, the yoga and wellness startup, had to shift its model to compete online after the lockdown came into effect. These trends are going to drive behavioural change among companies. “I think that the best solution is for companies to sync hybrid or omnichannel as an integrated solution by saying that I have an online presence on ecommerce or my site, and then I also put it into stores. To me, that is not omnichannel, but two independent channels,” he explained.

For omnichannel, if a brand can integrate inventory and experience, it could redefine what is the definition of the digital brand. Lunia says that businesses need to find ways of capturing uncharted territories while existing large players will add digital brands to their repertoire. This will be a tough year for retail or consumer brands, so startups need to conserve cash in as many ways as possible. It is going to be an opportunity for sectors such as healthtech and edtech which can move from the affluent set to a more mass audience. 100X’s Mehta also said that he is looking for opportunities across digital-first space and he sees a lot of brands having an entrepreneurial mindset.


Fireside’s Singh said young brands need to go back to the core value proposition and pull back on fancy experiments, which is also one way of conserving cash but in a smart way. Further, he believes that it is the right time to build a new brand, one which balances the digital and physical needs of today’s market.