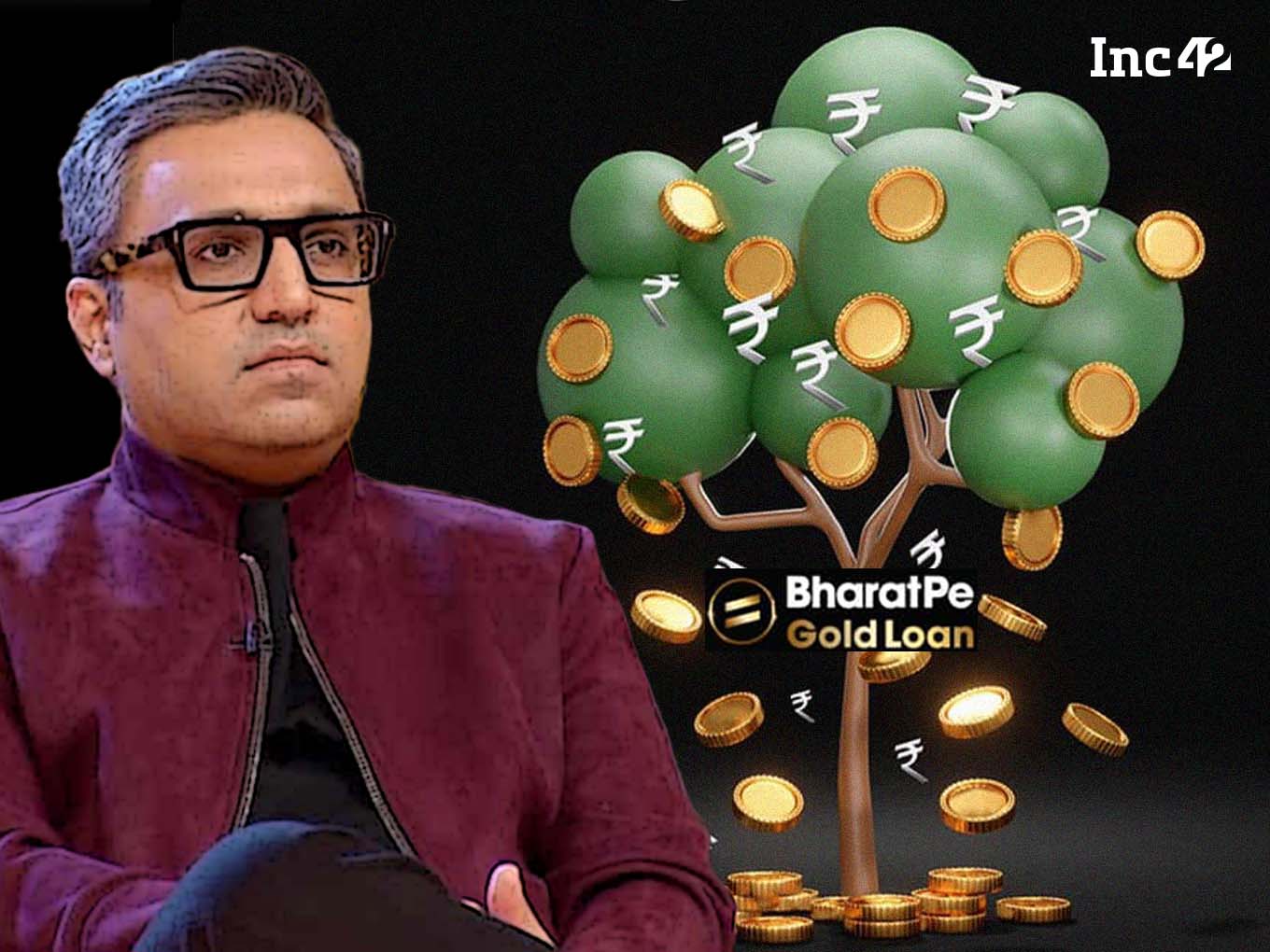 On March 14, the fintech giant launched a Gold Loan Vertical that aims to facilitate disbursals worth INR 200 Cr by 2022 end

I had brought Nikhilesh Govil (ex-colleague from Kotak and PC Jewellers) one year back to build (the) Gold Loan business: Grover

The product was in beta mode over the course of the last few months and is now officially available…We do not intend to respond to baseless allegations: BharatPe

In the latest chapter of the BharatPe saga, ex-managing director Ashneer Grover has now lambasted BharatPe, claiming the ‘gold loan vertical’ was his brainchild.

Training his guns at the current CEO Suhail Sameer, Grover accused him of taking credit for the idea.

The beleaguered former BharatPe executive said, “BharatPe has today peddled another lie that they’ve launched Gold Loan under Suhail. I had brought Nikhilesh (ex-colleague from Kotak and PC Jewellers) one year back to build the Gold Loan business.”

He also said that the contentious vertical was launched by the duo (Grover and Govil) nearly six months back, adding that they together had also expanded the vertical to three cities (Delhi, Bengaluru and Hyderabad).

In his message, Grover also highlighted a slew of other products that continue to lay in limbo ever since Grover’s departure. He also underlined the Mechant Stock Option Plan, which was ‘supposed to go live by January 2022’ has not yet been launched by the fintech giant.

He also added that the BharatPe had planned to launch the ‘3 Month customer interest free EMI product’ to counter the already existing ‘UNI Cards.’ The move, according to Grover, was also going to enable the fintech major to help merchants sell items to customers on EMI without the need for a PoS machine.

Highlighting the lapses of the company, the ex-MD of BharatPe also said that UNITY small finance bank depositors were yet to be provided with a digital interface. This he said `impeded the users from accessing their funds.

In retort, a company spokesperson refused to respond to the allegations.

In a statement sent to Inc42, the company said, “As part of BharatPe’s growth journey, we officially announced our foray into gold loan yesterday (March 14). The product was in beta mode over the course of the last few months and is now officially available for all merchant partners in Delhi NCR, Bangalore and Hyderabad. We do not intend to respond to baseless allegations.”

Earlier on March 14, the fintech major had announced its foray into the gold loan category which will enable its merchants to secure loans via gold. BharatPe has partnered with a slew of Non Banking Financial Companies (NBFCs) to offer gold loans up to INR 20 Lakhs.

As part of its expansion, the startup is aiming to scale the product to make it available in 20 cities by 2022 end. Add to this, BharatPe also plans to facilitate INR 500 Cr worth of disbursals by 2022 end.

This comes on the heels of Grover criticising Sameer for buying a BMW Z4 convertible ‘within a year of joining BharatPe.’ Grover had also taken potshots at Sameer saying that if the CEO could buy a luxury car, the founder too could afford a used Porsche.

The comments came after Grover became the talk of town for owning a Porsche Cayman amid allegations of financial misconduct within BharatPe.

Earlier, another row had erupted after a Bloomberg report, quoting sources, had claimed that Grover reportedly told his coworkers that he spent INR 1 Cr on a dining table. In response, the ex-BharatPe MD tweeted out a photo of his dining table saying it was ‘not even worth 0.5%’ of the alleged amount.

The entangled drama began when Grover’s expletive-laden audio went viral. Later, an internal audit within the fintech major pointed to major allegations against him and and his wife Madhuri Jain Grover, former head of controls at the company, of embezzlement, payments to fake vendors and syphoning-off money.

After a major standoff, Grover resigned from BharatPe and its board on March 1. But, the two sides have continued to stick to their guns refusing to concede. And from how it is going, more such verbal duels likely seem on the horizon.