After The Allegations & Public Spat With Ashneer Grover, What’s Next For BharatPe?

After The Allegations & Public Spat With Ashneer Grover, What’s Next For BharatPe?

Another page has turned in the BharatPe saga, which has become like a reality show with outbursts and spats. We have seen accusations from both sides, rebuttals, mudslinging and pretty much everyone in the company has been dragged in the melee.

One thing that’s been somehow forgotten amid the torrent of controversies is what happens to BharatPe now? As reported earlier, hundreds of employees are already looking for a way out, but beyond that there are some existential questions for the fintech unicorn. Where does it go from here?

We’ll lay out the potential implications, but take a look at these two stories before that:

Even as BharatPe is looking to distance itself from Ashneer Grover and alleged many problematic things, the only thing we can be certain about is that the former cofounder will not go down without a fight.

It wouldn’t be hyperbole to say that these controversies have in a way distracted the company from its business and growth. Instead of building on its many products, the focus of the leadership has undoubtedly been on fighting these fires. But there are other challenges to consider too.

BharatPe’s primary business is the merchant-focussed payments solutions where it offers merchants a single interface for all UPI apps, as well as allied services such as lending and more. On the consumer front, it offers a PostPe, another buy now pay later offering, which was launched in 2021 as the BNPL segment exploded in popularity.

In all these verticals, it is competing with giants such as Paytm, Pine Labs, PayU among others. Pine Labs is gunning for growth as it looks to break into the public markets with a US IPO. It is likely to have the capital to push for growth in India and other markets soon enough.

Paytm is highly focussed on the merchants payments business as seen in its recent quarterly financials. Paytm’s merchant payment GMV has grown by 123% in the past year and it earned INR 586 Cr from processing payments for merchants, which is more than 2X the annual losses for BharatPe in FY20 which was INR 216.32 Cr.

So the competition is getting tougher and BharatPe needs to put this episode behind it and focus on fighting for market share and achieving profitability.

Is BharatPe a good place to work? That’s another major question that the top management has to answer in a very public way. In fact, as we have reported, hundreds of BharatPe employees are said to be on the lookout for new opportunities amid these public spats. The company is estimated to have around 1,300 employees, as per its LinkedIn profile.

It’s ironic that BharatPe, which was at the centre of the talent war debate last year due to its promises of big perks, now has to fight to prove it’s a worthy destination for tech talent.

Throughout this saga, BharatPe cofounder Shashvat Nakrani has remained in the background and relatively quiet. This is presumably deliberate, as the company and board would have wanted to protect its only cofounder in case of Grover’s exit.

Given the same status for Bhavik Koladiya, Nakrani is the only founder of BharatPe as things stand. We cannot remember too many startups where two of the founders have had to relinquish their titles in such a manner.

Then let’s talk about culture dilution and vision erosion. Culture is key to keeping a startup alive — without it, a startup is like a generic company or business. In fact, many founders believe that culture defines everything, from revenue to product.  But culture cannot keep changing, it cannot be seasonal — there’s a certain permanence to it.

And in the case of BharatPe, there’s now just one founder acting as the guardian of culture at a most critical time.

Similarly with vision, it begins with leadership and here too BharatPe has holes to fill. Yes, Suhail Sameer is now leading the company through a tough time, and while an external CEO can follow a set vision, for a startup, the founder group is key to fulfilling that vision.

What About Unity SFB?

Finally, there’s the Unity Small Finance Bank. The bank licence will be critical for BharatPe to build a sustainable loan book and widen its merchant-focussed financial services umbrella.

While former SBI chief Rajnish Kumar was brought on board for his expertise in India’s financial sectors and familiarity with compliance processes, he landed in the company at a time when everything was going haywire. And now he too has been dragged into the very public mess.

These conditions have made for an uneasy beginning to Kumar’s BharatPe experience, and it’s not about to get easier. Sadly, there are many potential potholes down the road for the fintech unicorn, and there’s little confidence in the notion that BharatPe might actually avoid a fall or two.

After a robust start to 2022, startup funding saw a major dip this past week, with just $233 Mn raised by Indian startups across 32 deals. This is significantly lower than the $699 Mn raised in the week before this, however, it is in line with the overall declining trend in funding since the beginning of February. Since then startup funding amount has dropped every week. Meesho’s IPO Run: Facebook-backed Meesho is on its way to an IPO, according to reports this past week, with the social commerce startup eyeing a listing by the first half of 2023.

Tech stocks did not have the best of weeks, but many of them recovered slightly after crashing last week. At this point, investors should still be wary of sell-off pressures and the geopolitical developments in Europe before going for the dip. 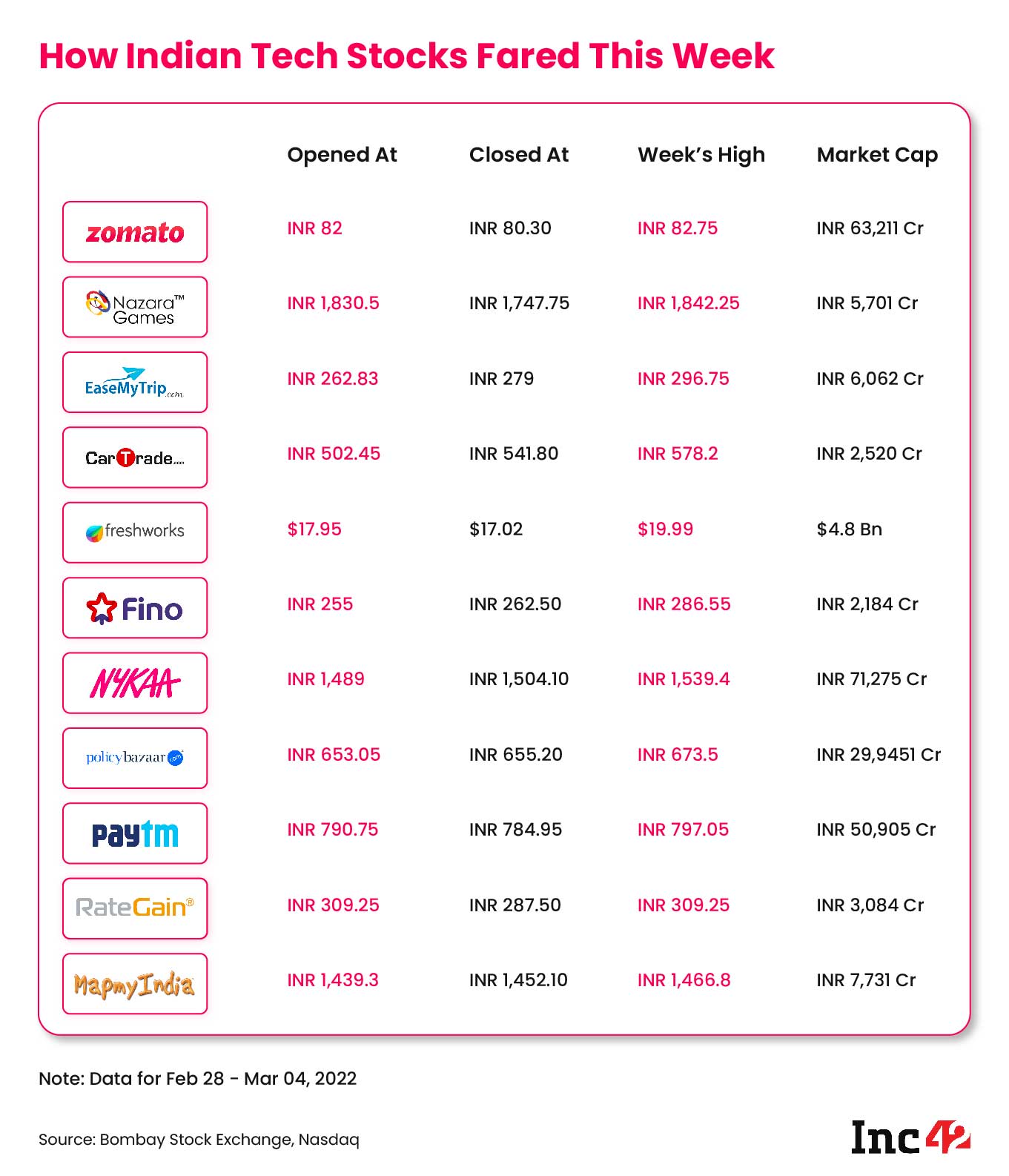 The Makers Summit 2022 & Other Hot Stories

See you again next Sunday with another roundup of the week’s best stories from Inc42 and everything that matters from the startup ecosystem.