Stayzilla Founder Arrested On Charges Of Fraud; Co-founder Gets Threats To Child’s Life – It’s Time For Startup India To Stand Up For Them

Stayzilla Founder Arrested On Charges Of Fraud; Co-founder Gets Threats To Child’s Life – It’s Time For Startup India To Stand Up For Them 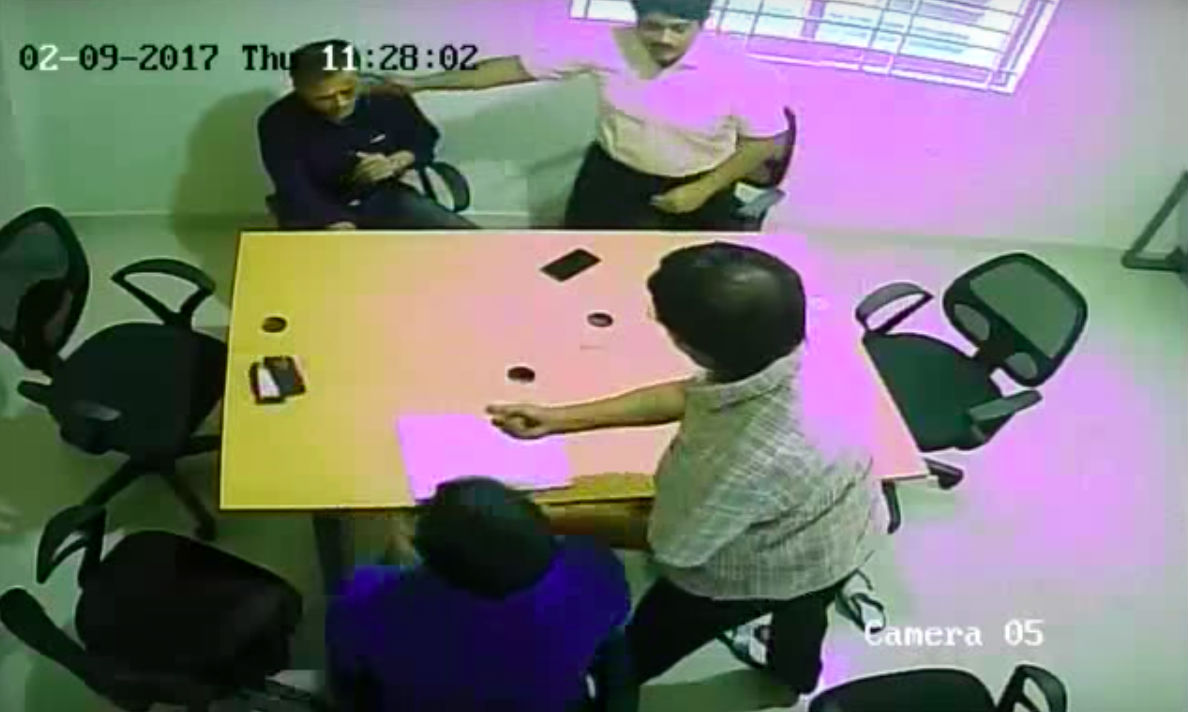 Indian homestay network Stayzilla, after suspending its operations in February 2017, has again made news. As reported, the company’s CEO and co-founder Yogendra Vasupal has been arrested on cheating charges by Chennai police yesterday.

The team included Assistant Commissioner of Police S Muthuvel Pandi and Inspector Anand Babu of the entrustment fraud wing of the Central City Crime branch. Reports reveal that Yogendra has been charged by Jig Saw Advertising Agency for a fraud of INR 1.72 Cr.

Just before his arrest (around 11.21 PM, 14th March), Yogendra also wrote a blog post on Medium highlighting the issues being faced by him and co-founder Sachit.

In the same blog, Yogendra’s wife mentioned that Yogendra was remanded in Police custody without any confession (contrary to the information published by Times of India (online) article dated March 14/2017 time 11.21 PM by Rachel Chitra). She wrote,

He was taken to the magistrate at 10.00 PM though courts do not function after 6 PM. His whereabouts from when the cops took him into custody today from 11.am to 6.00pm where not known and the lawyer and our family had to go from one station to another looking for him. This shows how money and influence can supercede true and thorough investigation in a country which talks so much about startups and culture. Now after the inappropriate article by Times of India (online-above mentioned), wondering if it has anything to do with Jig Saw Solution and Advertising owner, Mr.Aditya C.S’s dad being a part of the press and wielding his influence there also.

In the blog Yogendra, highlighted the problems faced by the co-founders. As he stated,

“I want to bring to light the problems that me and Sachit are facing. We are also seeking any help that you have to offer. I had announced that Stayzilla will be rebooting its operations on Feb 23rd. While things are progressing well with respect to the reboot (more on that later), I have realized that while we all want India to Start-up and Stand-up, the regulatory framework + corruption does not let one pick up after they fall. Instead it works overtime to bury them.”

He highlighted two cases against them.

The trouble came along from the landlord of their office premises, who (unfortunately) is a politician. He has been continuously assaulting and threatening them.

We had been working out of our office in Bangalore for roughly a year. When we got to know in the end of January that the next 3–5 weeks was going to be touch and go, we thought it would be better to sit down with the landlord and explore various options and prepare for contingencies. In the initial meetings, I had to bear a lot of verbal insults of being called a failure multiple times and how a failing company is destroying the reputation of his building. I ignored all those repeated insults to find any common ground with the Landlord. Over multiple meetings he started getting even more agitated demanding immediate payment (for which he had accepted a post dated cheque of March 7th) and became violent. He assaulted my admin staff in front of me threatening to kill him with the revolver in his car. The video and audio (in Kannada) is there below for your perusal.

They also have video and audio proofs for the same.

He also mentioned that the landlord was a regular source of trouble for them, with him insulting and accosting them at every turn. “In fact the smoking area in the company was moved from the ground floor (adjacent to the bike park) to the terrace because he used to pass comments on any women staff who took their breaks there. Unfortunately, this was brought to my attention almost towards the end. I was not able to find any CCTV footage beyond a month-old and proceed in the right legal manner. And so decided to pursue the latest assault, instead of ignoring it, through the right legal means.”

He further mentioned that he went to the Police Station the same night with his complaint and evidence to register his case but they returned with only a promise that the complaint will be heard by a senior officer who can decide the next steps.

We went the next day in the morning at 9:30 am. We got an FIR filed by 2pm after various officers got to know that I had video evidence of the assault and that the media had started getting interested in it. I assured them that I am after justice and not revenge and that if an FIR was filed, I would like to quietly have the matter resolved by them while me and my team were protected. Just as the FIR was filed, I found out that the land lord had returned to the office with a lot of his folks roaming in front of the office in bikes and on feet. I again had to escalate the matter to a senior official to get him out of the office because everybody in the police station still refused to do anything about it. Keep in mind the FIR was already filed by then. The senior officer was informed by my Lawyer that he would inform the media and have a reporters with TV Cameras at the office with in 1 hour. The senior officer acted fast and got 2 flying squads to the office to contain the Landlord.

Not only this, Sachit also got some doll delivered to his home on March 9th with the image of his son. 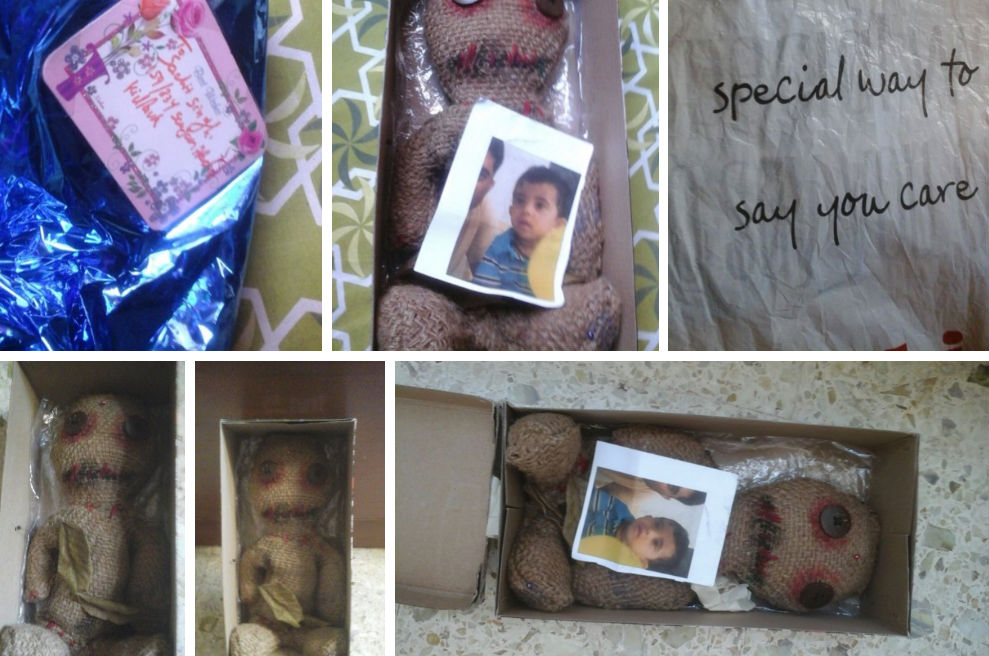 The second case as described above, is from the advertising agency, for which they had asked to take it up in court. As he wrote,

Almost a month later, on March 9th, two policemen in Bangalore came home in mufti and stated that I am wanted in the station for questioning. I was told that there is a case against me by somebody from Chennai for cheating, intimidation and etc. I recognized the name of the complainant and informed them that there was a dispute between 2 companies and we had asked the other company to take it up in the court. I don’t personally owe anybody money and I am wondering how can they get confused on such a basic matter as this was a clear civil case.  I also pointed out that my company is also owed close to INR 7 Cr from various debtors but I am not going around filing false criminal cases against them.

“My lawyer was asked to bring the draft response on the following Monday to settle the matter — 13th March — as the Inspector was taking a personal trip for 2 days. That’s when I realized that things are not neutral as the Inspector had communicated one thing to my lawyer while doing something else and was acting in bad faith.”

He also said that the same day policemen went to Sachit and his own house asking for them. “When my parents or his parents asked for the reason, they said that there was some complaint and that they did not know what it was about. My father lost it and asked them how they could be looking for a person with know what they were looking for and if they were just trying to create nuisance.”

He further goes on adding that,

On Sunday, I got to know that the complaint filed against us had false accusations like Sachit going to the vendor’s office to threaten with 2 henchmen of some MLA. That I used to call him and threaten him of dire consequences if he pursued the matter. I laughed and said I had never spoke to him and would love for him to get any call records proving the same. And that Sachit was the one who was threatened by people visiting office and on call. We even had the CCTV footage of those henchmen coming to our office. At that point I thought that this vendor was smart to have used his illegal actions as the template of his complaint against us. Now in hindsight, with the bad faith shown, I am not sure if it was the vendor who was smart or was he being guided by the Inspector/higher ups to protect himself better. The same day, my lawyer gave the gist of the case outlining that this was between 2 companies (where Stayzilla had already paid over 80% over a period of 3 years, where cumulative amount paid is 6.5 Crore Rupees) and that the dispute began with a “severe deficiency of services” and we have repeatedly asked the other party to go to court if they felt there was any wrong. It was also pointed out that the Pvt Ltd company had certain protections offered in terms of these kind of cases. Further the call recording of the vendor and his family threatening Sachit and his family was also shared. My lawyer walked away with the impression that the Inspector was professional and that it made sense to work with him to close the case and followed his instructions to first close this case before filing the real case of threat, intimidation, outraging the modesty of women next.

Post arrest, the other co-founder Sachit Singhi, also wrote in an e-mail to investors that “Yogi (Vasupal) is missing!!!. He was last been seen at the office of the commissioner of police in Chennai. We need immediate help. Not sure what’s happening with Yogi and we have not known his whereabouts for last 3 hours for now. And, I think even I’ll be in custody soon.” 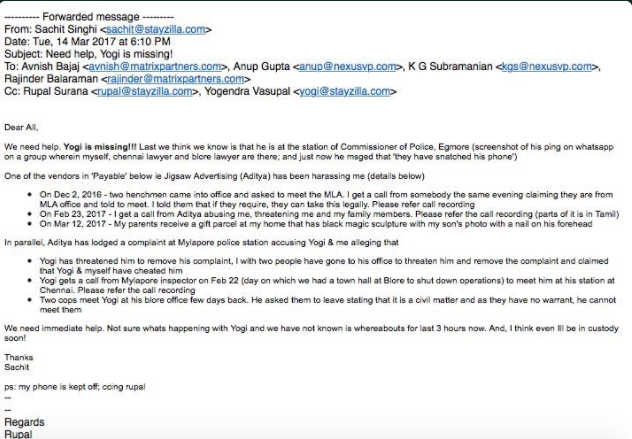 He also stated that since December 2, 2016, they had been receiving threatening calls.

Also, after his mail got viral on Twitter, many offered to help the Stayzilla team to get out of this mess.

Founded in 2005 by Sachit Singhi, Yogendra Vasupal, Rupal Yogendra, as Inasra, and later rebranded as Stayzilla in 2010 – the platform acted as a marketplace for homestays and alternate stays in India, with around 55,000 stay options across 4,500 towns in the country.

The platform catered to both homeowners and travellers looking for differentiated, unique stay experiences. Yogendra founded the company with his wife Rupal Yogendra and his friend Sachit Singhi.

Initially, funded by Indian Angel Network with an infusion $500K in Seed round, Stayzilla had raised an undisclosed Series A in 2013. It got further funding in 2015 when Nexus and Matrix put in $20 Mn in Series B and later $13 Mn Series C in 2016. The startup competed with Fab Hotels, Yatra, OYO, Airbnb, MakeMyTrip and others.

The founders have recently decided to shut down and revamped the business model. The close of operations was confirmed by Yogendra via a blog post, citing reasons for their downfall as well the strategy for their comeback.

Around 11 AM, Karnataka’s IT and tourism minister tweeted about the same:

Working to see how we can sort out @stayzilla issue with my counter part in Chennai. Will be reaching out to him soon.