#StartupsVsCovid19: Vijay Shekhar Sharma On The Rise Of Gaming And The Big Offline-To-Online Migration

#StartupsVsCovid19: Vijay Shekhar Sharma On The Rise Of Gaming And The Big Offline-To-Online Migration

He added that Paytm will soon introduce offline payments as well

Grocery and gaming have the biggest potential, according to Sharma 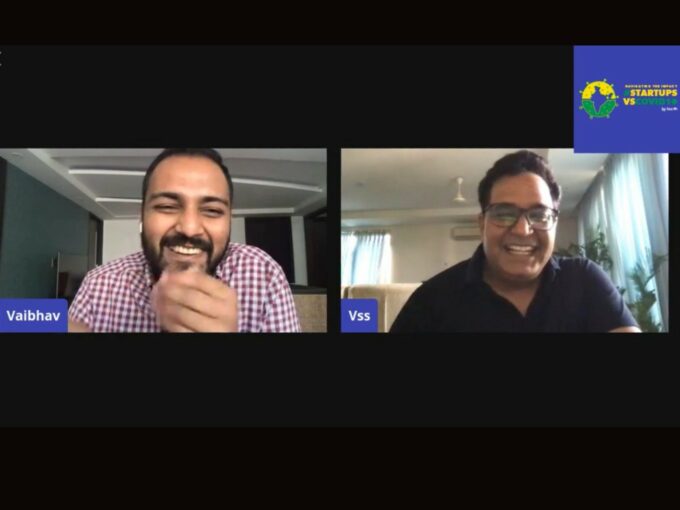 Having been in the Indian startup ecosystem for over two decades, Vijay Shekhar Sharma has sailed through more than one major financial crisis i.e the 2008-09. His company One97 Communication and the brand Paytm became a household name with demonetisation in 2016, but Paytm has been around since 2010, soon after the world bounced back from the recession. So Sharma made the most of the opportunity and now there’s a bigger opportunity for the right innovations in the Covid-19 world.

Right now, ecommerce and healthtech are staring at a similar market opportunity. And Sharma agrees that this is the best moment for entrepreneurs in the grocery delivery industry.

In the post Covid-19 world, Sharma is seeing changes such as migration of consumers from offline to online to unbundling of services to the rise of gaming, even at the expense of digital entertainment and more.

Vijay Shekhar Sharma was speaking to Inc42 cofounder and CEO Vaibhav Vardhan and our viewers in the latest edition of our ‘Ask Me Anything’ series under the #StartupsVsCovid19 platform. He spoke about the shift from offline to online as well as changes in fintech market which will be apparent in the post-Covid-19 market in India.

Being in the fintech space, Sharma says that this is the time the classic curve in a journey where people who underwrite well will boom. Speaking of the businesses that will flourish within fintech, he mentioned that the lending is one of the biggest opportunities which comes out of these times.

“Companies that swing around to the opportunity of distributing unsecured loan and collecting them well, and underwriting them well will become the champions of tomorrow,” Sharma added.

Overall, about the shift in customer behaviour, Sharma says that there is a fear and this will affect future businesses as well. Therefore, he expects that a lot of people will move to digital platforms inevitably, and there will be new user behaviours emerging from this. Sharma also talked about the recent new entries in the grocery industry.

Over the past month, due to immediate demand of grocery amid pandemic-led lockdown, the country has seen the widespread launch of essentials delivery by brands. From Domino’s to BharatPe, every company is trying to leverage the opportunity as the grocery delivery becomes the next hot commodity.

To this, Sharma said that this is the best moment. He referred to a conversation with Flipkart cofounder Sachin Bansal, where Bansal said that grocery is the holy grail of ecommerce. “So I’d say that if more people are taking chance, it simply means that more people can probably build a holy grail and touched on,” he added.

He did emphasise that the industry has its own set of challenges, and especially right now supply is impacted. But Sharma reiterated that this despite the opportunity, not everybody can be successful. The good part, Sharma said, is people are not looking for discounts. He also joked further that people are demanding groceries and he is happy that even without discounting, people are ordering products.

“When you grow by spending money and then it grows without discounts, you realise the company is good but it was competition pressure and now it isn’t there,” Sharma said.

Discounts have been a major cost burden for Indian startups due to the price-sensitive nature of the Indian consumer. This is usually the source of cash burn for rapid growth and scaling. With Covid-19 and businesses cutting costs, Sharma said businesses will spend far more conservatively in the future.

Paytm chief also said that VC cheques of different amounts have multitude use-cases. He said that he doesn’t expect funding to be easy for the next six months or so. As for expensive or risky ideas, Sharma says that perfectly good balance business models will get funded and supported definitely. “But not every kind of experiment is going to be supported,” he added.

He further said that due to market pressures, limited partners’ restrictions will mean fewer commitments to VCs and hence funding will suffer. He expects early-stage funding to be impacted the most as investors would be risk-averse.

In terms of future trends, Sharma is gung-ho about the prospects of gaming. He said that the gaming market will soon surpass the entertainment industry in terms of revenue. “Whether you look at the box office, television, entertainment, etc, gaming will supersede that revenue faster now, because people are not necessarily demanding or they’re able to find out another asset,” he added.

Sharma said that of the biggest gainers, gaming will be in top three. “Surprisingly, commerce may not gain as much as the gaming will gain,” Sharma said. He further envisioned that businesses will need to earn users’ trust, offer unbundled service products and remember that they are building for less than 100 Mn.