If the govt does not come up with a bail package, 10K-12K startups may have to shut down, said Pai

‘Some things never change in India!’

While the Indian government claims to have abrogated angel tax for Indian startups on paper, the ground situation remains unchanged for many startups. In a new twist to the pending angel tax cases of startups in the Tribunal, courts, the income tax department has started adjusting the dues against the income tax refunds paid out to of the startups.

The development comes when the entire Indian startup ecosystem is badly crippled with the recession triggered by Covid-19 pandemic.

“Over 25% of the Indian startups i.e. 10,000-12,000 startups pan India may have to shut down if the government does not come up with a bail package,” Siddarth Pai, founding partner of 3One4 Capital told Inc42.

While Pai was counting on how the US, the UK, France and Germany and many other countries have come up with a budget to bail their startup ecosystem, in India, the situation is indeed a little backwards.

Despite the government having come up with Direct Tax Vivaad Se Vishwas Act on March 14, 2020 to settle the pending direct tax disputes of worth 9.32 lakh crore at the earliest and angel tax abrogation announcement last year, startups continue to face the wrath of the income tax department and officers for the pending angel tax disputes.

Tax Refunds To Be Adjusted Against Pending Angel Tax?

Gurugram-based InnerChef cofounder Rajesh Sawhney recently tweeted that the I-T department has informed the startup that it would refund the due tax refund. “However, in the same mail, the department has also said that the said amount will be adjusted against pending “angel tax” (which is under dispute in courts + Finance Minister’s assurances). Some things never change in India!” 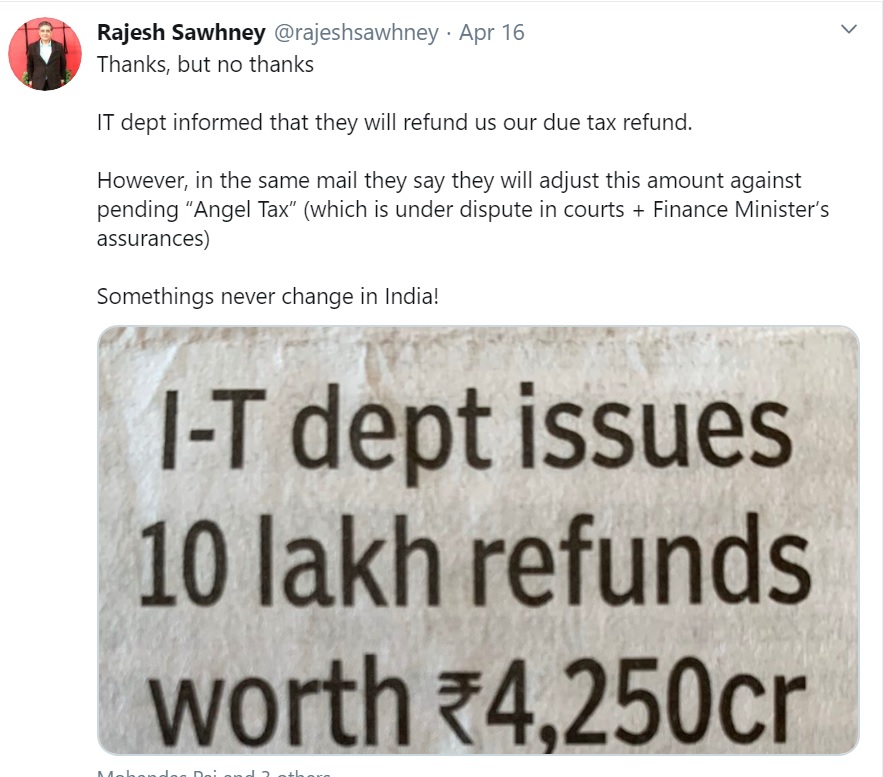 Sawhney is not alone, many other startups have received similar notifications. Srinivas Varadarajan founder and CEO of Mysuru-based Vigyanlabs Innovations too received a similar notice, around a month back.

Now, the income tax department has sent a notification to Varadarajan that the angel tax amount will be adjusted against the outstanding amount.

Showing the notification, Varadarajan frowned, “The assessing officers had wrongly calculated the expenditure as part of income which we have contested in the past, multiple times. We have shown all the documents including valuation, and funding-related, at one point, the income tax officers were even satisfied and validated our claim and issued the refund for FY 2017-2018, however, soon after a couple of months, they reopened the case.”

“The officer transferred and as soon as a new income tax officer joined in, we had to start the entire process from scratch,” he said.

Like all other startups, Varadarajan too had filed an appeal against the pending angel tax issue with the Income Tax Appellate Tribunal. “The case has not moved since then,” he said.

While Pai and many others have raised the issue with the finance ministry, ‘it’s a quasi-judicial process,’ where even the government can’t intervene directly,’ said Pai.

As one of the longest economic slowdowns has now turned into recession, which many view as much larger than 2008’s recession, startups have been facing a historic funding crisis. Most startups have also been reporting huge losses. And, given the fact that there’s a lockdown and nothing is happening with such pending cases due to government offices being semi-functional, adjusting the I-T refund against pending angel tax amount will be unjust to startups, said Pai.

He added that the Invest India, Startup India team and DPIIT have been apprised of the issue at large. And, they are following up the issue with the CBDT, the direct tax authority.

The income tax department of India in multiple circulars had stated that startups won’t be harassed due to angel tax-related issues. In fact, the finance minister Nirmala Sitharaman in August last year, had made it very clear that while no angel tax will be applicable to the registered startups, the existing pending cases too would soon be resolved.

Looks like once again, the government has shown that when it comes to friendly policies, it’s all talk and little action to back up the tall claims.