Indian startups raised over $3.7 Bn in funding in Feb 2022 across 164 deals, slightly lower than the January 2022 figures

The month saw 12 mega rounds (over $100 Mn), with late-stage startups grabbing the majority of the funding to the tune of $2.5 Bn

While in terms of startup funding amount and the number of deals, February 2022 saw a minor decline compared to the previous month, the emergence of five new unicorns was a major milestone for Indian startups. An Inc42 analysis found that Indian startups raised over $3.7 Bn in funding between February 1, 2022 and February 26, 2022, across 164 deals. This was 2.6x higher than the amount raised in funding for February 2021.

In terms of deal count, February 2022 saw 76% more startup funding deals than the same month last year. Overall, we recorded 555 unique investors participating in these rounds. But as mentioned above, in comparison to the previous month, February 2022 saw a drop in funding amount and number of deals — $4.6 Bn in funding and 196 deals in January 2022. 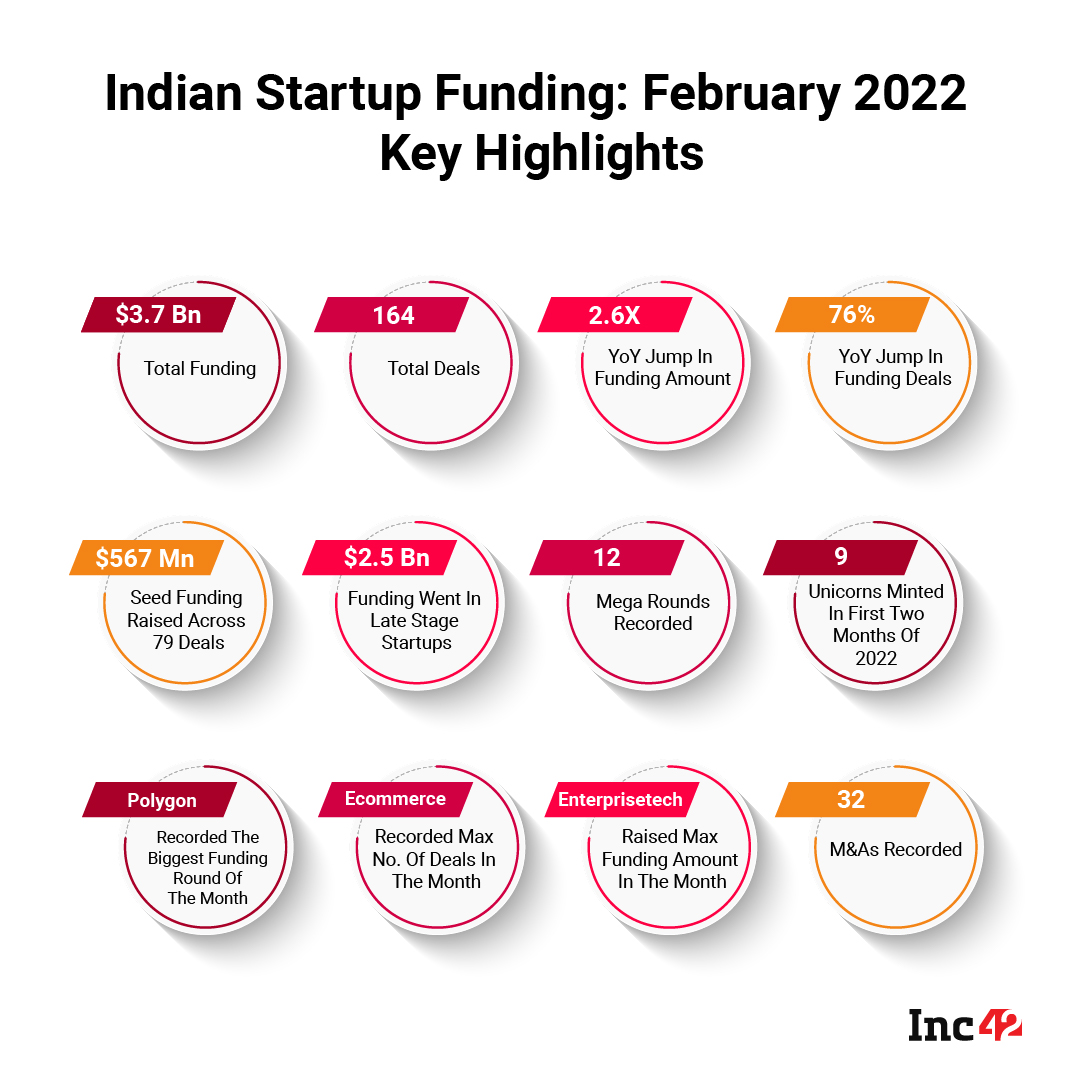 Overall, February saw 12 mega-rounds (over $100 Mn), with late-stage startups grabbing the majority of the funding to the tune of $2.5 Bn. This meant a $100 Mn+ round every other day for Indian startups in February 2022. 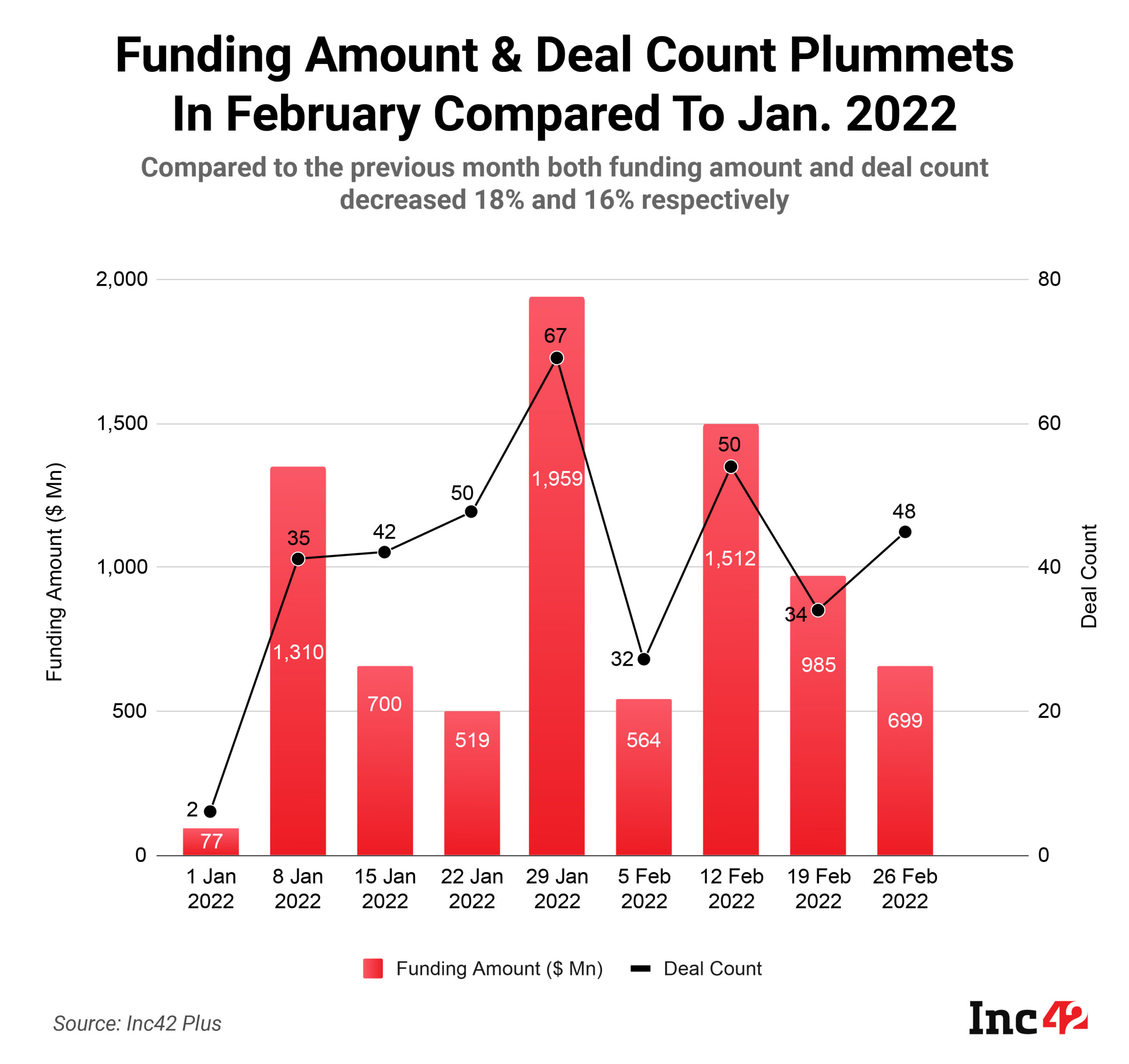 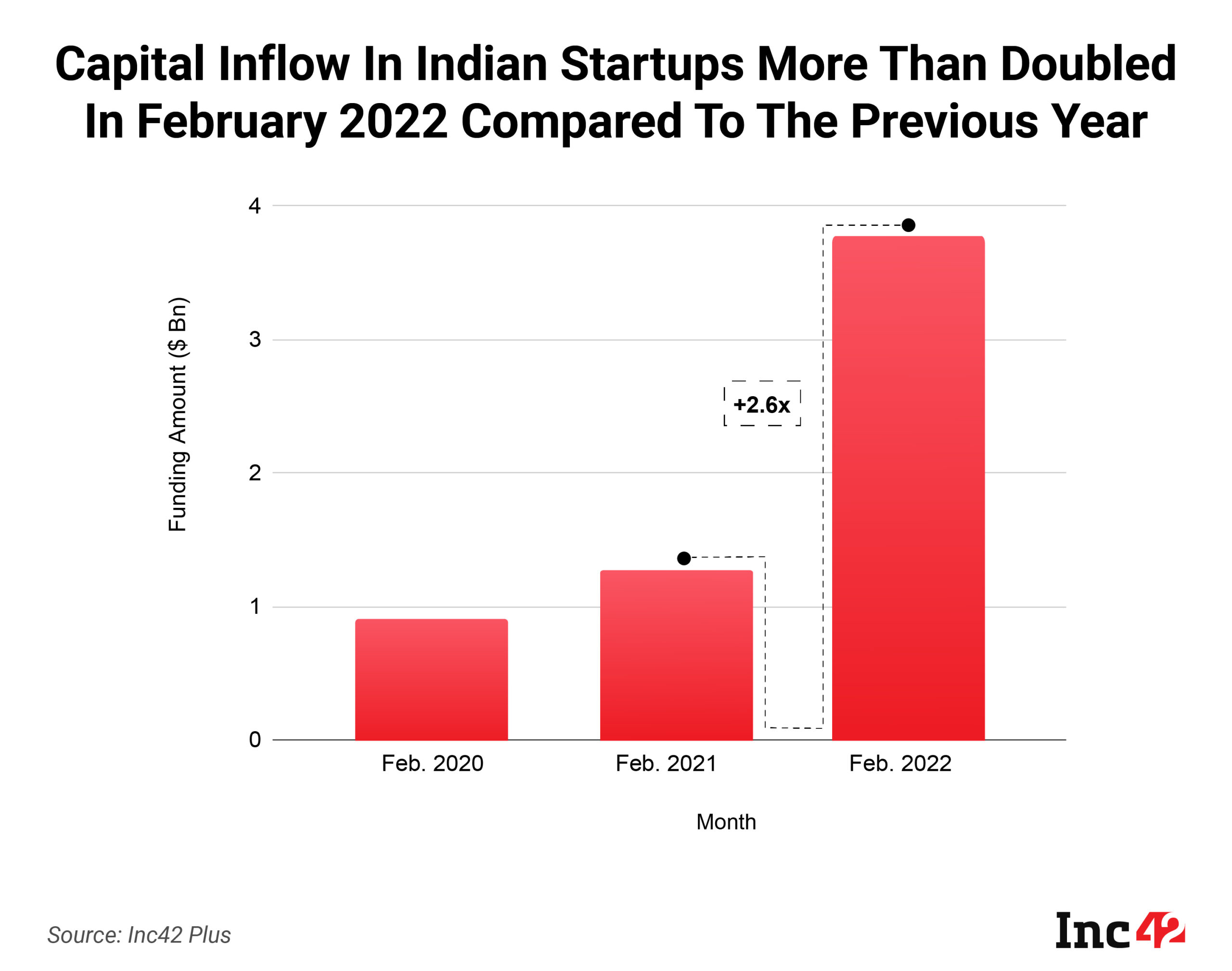 Among the hot startup sectors, enterprise tech led the pack in terms of the deal amount for February 2022, raising over $893 Mn across 32 deals, followed by ecommerce startups, which raised $593 Mn cumulatively in the month. The other top-funded sectors include fintech ($536 Mn), deeptech ($502 Mn) and logistics tech ($340 Mn). However, the ecommerce sector saw the most number of deals, contributing 37 deals to the overall number in the month. Further, in February 2022, the enterprise tech sector witnessed 32 funding deals, followed by fintech (31 deals), media & entertainment and deeptech (10 deals each).

With its $450 Mn fundraise, led by Sequoia Capital India, SoftBank and Tiger Global, blockchain startup Polygon was the top-funded startup in February 2022. Uniphore ($400 Mn), XpressBees ($300 Mn) and ElasticRun ($300 Mn) were the other startups that grabbed the biggest deals of February 2022. Incidentally, the latter three entered the unicorn club after their respective rounds in February. 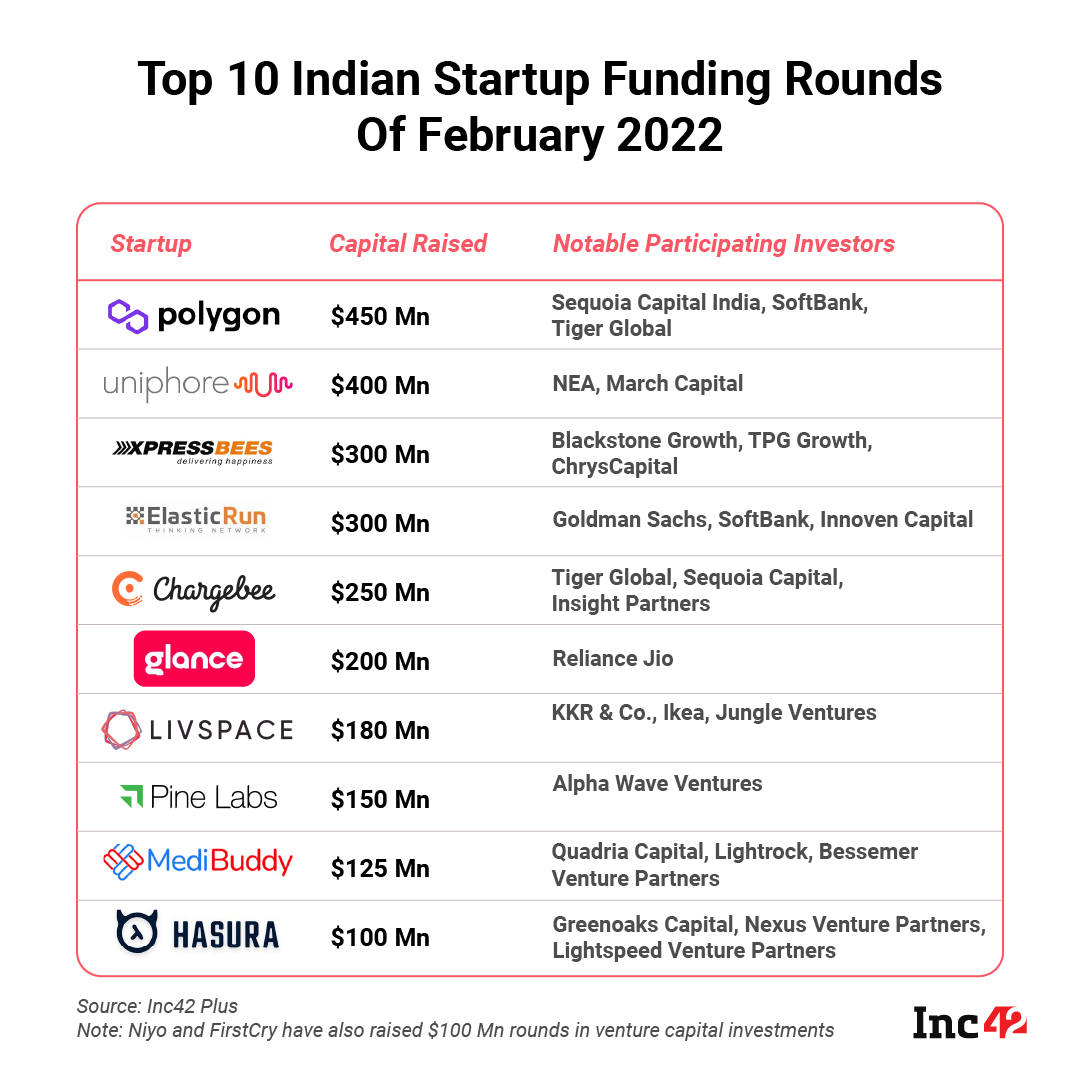 Startups such as Chargebee, Glance, Livspace, Pine Labs, MediBuddy, Hasura, neobanking startup NiYo and Firstcry featured among the 12 mega rounds in February 2022. SoftBank, Sequoia Capital and Tiger Global were the most active investors in these mega rounds.

Even though the funding amount has fallen in comparison to January, the creation of five new unicorns is a positive development for the Indian tech ecosystem. The rise of enterprise tech startups is another sign that Indian tech products and services are being accepted globally.

However, the funding picture also has some red flags. Large venture capital firms have turned their focus to early sunrise sectors, where they are finding better deals or to the public markets, where tech stocks have dipped and represent great long-term bets. For instance, Tiger Global invested in several unicorn rounds in 2021 but this year, the VC firm is focussing largely on early-stage deals and public market value bets. And this despite being one of the most active investors in India.

With most of India now reopening, students back in schools and many workers back in offices, the feeling is that the worst of the Covid pandemic is now past us. While there is optimism about the economy, it is safe to say that it is guarded in nature. The Indian startup ecosystem would be quietly confident of scaling up and growing rapidly in light of these changing market conditions.