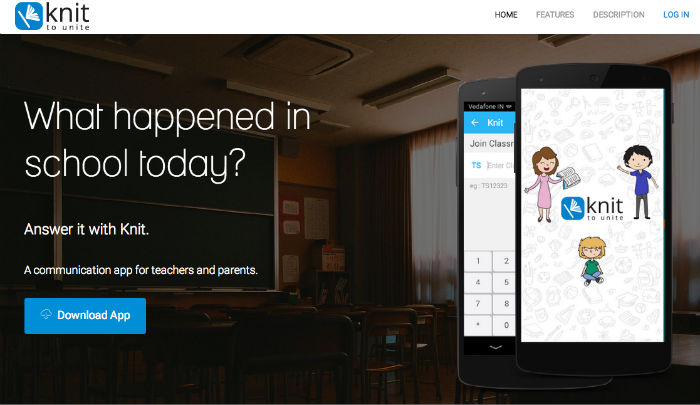 Mumbai-based Trumplab Edusolutions Pvt Ltd, the company behind communication app for schools-Knit has raised an undisclosed amount in seed round of funding led by a group of investors including Rohit Jain, Co-founder Mexus Education and Amit Rambhia, Vardhaman Technology .

Knit is a one-way communication app which allows teachers to broadcast messages/SMS to all the parents right from their phone. For every classroom a teacher creates, the app provide them a unique code using which anyone can subscribe to the classroom either via app or via SMS. Once all the parents are on-board, teachers can start broadcasting reminders, announcements, homework etc.

The company had done a pilot at P.G. Garodia School in December and there were around 600 parents and 30 teachers. Everyday around 2500 reminders were sent by these teachers.

The app was made available to other schools on 1st January and since then it has signed up 5 schools and is about to signup many more in coming days.

According to the company, currently 10k messages are sent daily. “We are targeting 20k unaided-high-end schools initially where we have around 20 million parents and teachers,” says Jaideep Poonia, co-founder, Trumplab Edusolutions.

Currently, Knit app is available for free and for future the company plans to enter into freemium model where it will provide teachers and parents some additional features for which it will charge but this basic, core application will always remain free.

The company plans to use the funds raised to launch on different platforms (it will soon be launching on iOS app), and further plans to invest in customer acquisition and team expansion.

The startup plans to reach out to 5000 schools in coming 2 years which will give it roughly around 5 Mn users. “Other than this we will also move towards monetizing the product once we have a good enough user-base to experiment,” says Jaideep Poonia.

The venture is being incubated at the Society for Innovation and Entrepreneurship (SINE), IIT Bombay. “A purely product play, with possibility of viral growth; an architecture that is globally scalable and presents a cost efficient solution to a real problem. That’s what TrumpLabs’ Knit is all about. What else could you ask for?,” said Ajeet Khurana, CEO, IIT Bombay’s SINE.

Trumplab was founded by 4 IIT Bombay final year students, Dhanesh, Jaideep, Shital and Vikas in August, 2014 and the app was launched in November. Currently, it is working with a team of 15 people working on tech, design and marketing