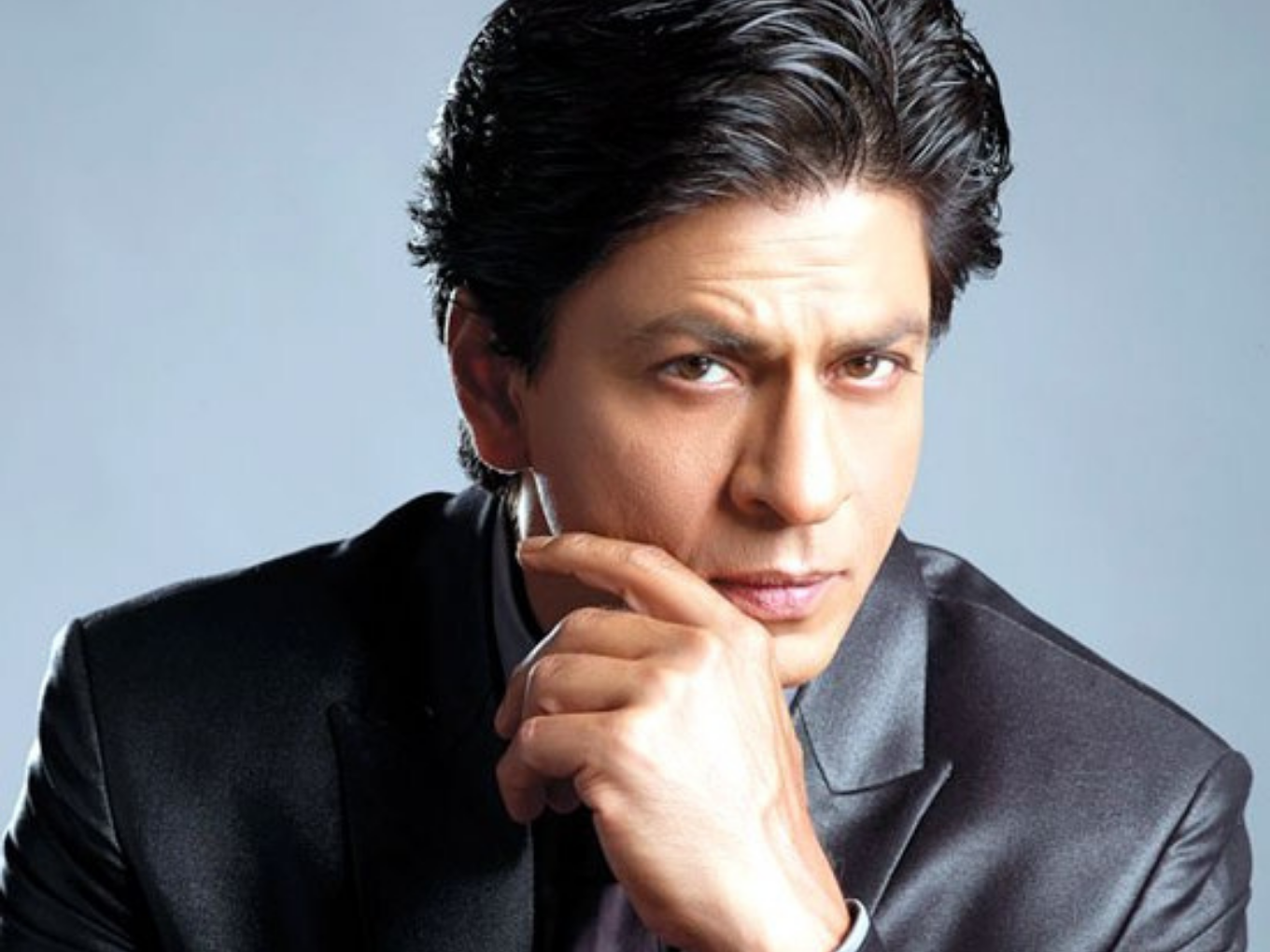 Before SRK, Bollywood celebrities such as Aditya Chopra, Ekta Kapoor, Shreyas Talpade and Anushka Sharma have already announced their ventures

There has been a 4X jump in the number of OTT services in India since 2015, with hordes of global, local, and regional players jostling for eyeballs

Bollywood megastar Shah Rukh Khan is coming up with his own OTT platform called ‘SRK+’ in collaboration with filmmaker Anurag Kashyap. The actor tweeted to share this news with his followers.

Sharing a poster, where he can be seen giving a thumbs up to his next venture that reads “SRK+ coming soon”, he tweeted, “Kuch kuch hone wala hai, OTT ki duniya mein (Something is going to happen in the world of OTT).” The dialogue has been adapted from his 90’s blockbuster movie Kuch Kuch Hota Hai. 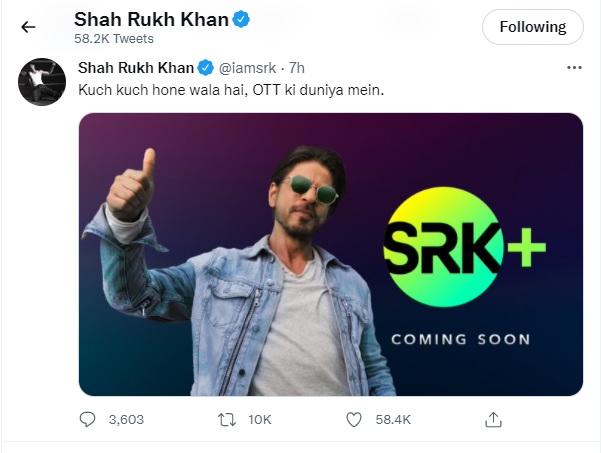 In a surprising turn of events, filmmaker Anurag Kashyap, who is known as the flagbearer of independent cinema, retweeted SRK’s tweet and announced his collaboration with King Khan’s OTT. Kashyap tweeted, “Dream come true! Collaborating with @iamsrk on his new OTT app, SRK+”. 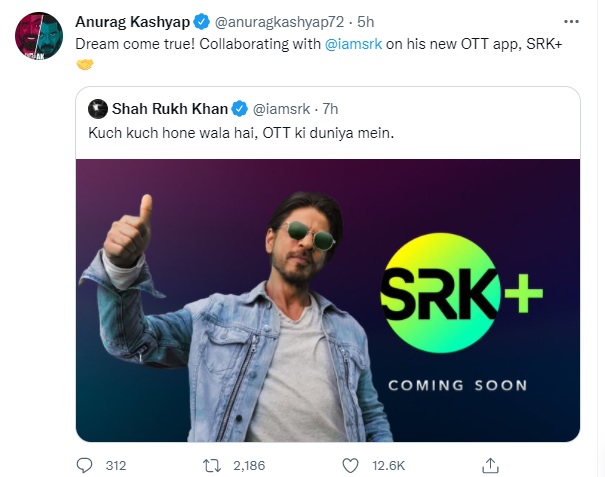 SRK’s tweet was soon retweeted by friend-turned-enemy-turned-friend actor Salman Khan, who congratulated Shah Rukh and retweeted, “Aaj ki party teri taraf se (Today’s party is from you) @iamsrk. Congrats on your new OTT app, SRK+.” Reacting to the post, fans were left in splits as Shah Rukh was hinting about the news, but Salman revealed it. 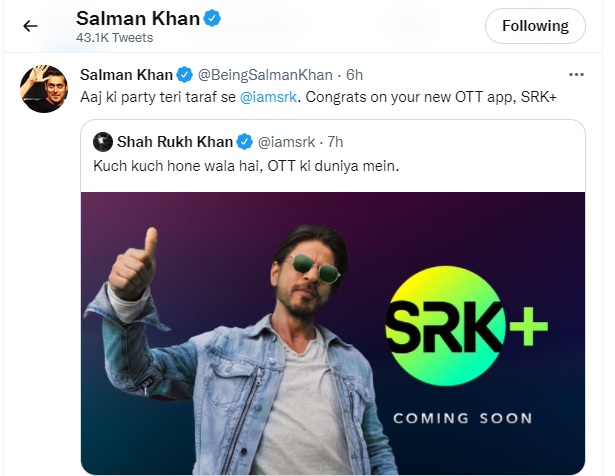 A fan tweeted, “Thank you Salman for clearing what it is. All us fans were wondering, is it a collaboration, is it his own platform…thanks for clearing it, never any confusion with you.” “Suspense spilled within seconds,” wrote a Twitter user. “Bhai ne scheme bata bhi di (Salman revealed the scheme),” said another fan.

This was followed by SRK’s close friend and filmmaker Karan Johar’s tweet, who also congratulated King Khan for his new venture. “Biggest news of the year. This is going to change the face of OTT. Super excited,” tweeted SRK’s friend and longtime collaborator Karan Johar, director of the aforementioned Kuch Kuch Hota Hai. 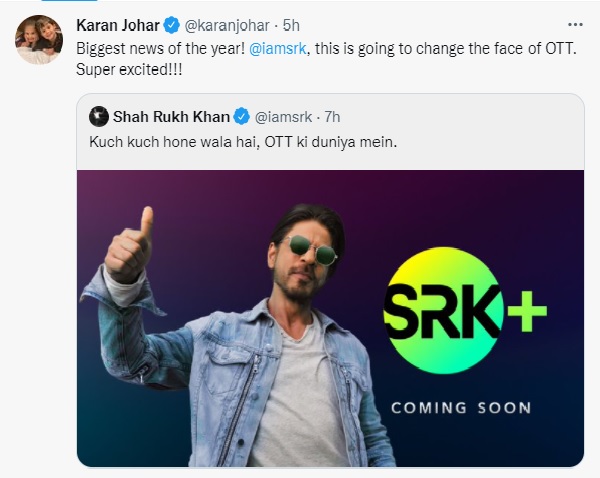 SRK has recently started sharing updates on social media platforms. He shared the first teaser for Pathaan on March 2, 2022. The film marks his comeback to movies after almost four years and to be released next year in January.

Over-the-top (OTT) platforms have become a center of attraction for Bollywood celebrities following the outbreak of Covid-19 pandemic in 2019 with movies directly being released on the platform.

Before SRK’s announcement on venturing to the OTT platform, celebrities including Shreyas Talpade and Anushka Sharma had already announced their stakes in OTT platforms for dedicated content.

For example, Anushka Sharma production house Clean Slate Filmz would be launching an OTT video streaming platform in the first quarter of 2023, named as Clean OTT. The platform will have women-driven storylines, actors, directors, and producers at the heart of its content library for the global audience.

Last year, actor-producer Shreyas Talpade launched a video streaming service, Nine Rãsã, which will showcase plays and other performing arts on the platform.

Likewise, film producer Aditya Chopra planned to invest INR 500 Cr for the OTT venture of his banner Yash Raj Films, which will be called YRF Entertainment. The announcement was made in November last year. Producer Ekta Kapoor’s ALTBalaji has also been in the streaming business.

The Mega Rise Of OTT Platforms In India

According to a report by the Confederation of Indian Industry (CII) and Boston Consulting Group (BCG), India’s media and entertainment industry has revived to pre-Covid levels and is expected to grow to $55-70 Bn by 2030 at 10-12% CAGR, driven mainly by strong growth in OTT, gaming, animation and VFX.

This growth in subscription-based OTT services offered by the likes of Netflix, Amazon’s Prime Video and Disney+ Hotstar can be attributed to the improved internet and smartphone penetration and payment mechanisms.

The CII-BCG joint report released in December 2021 said OTT or video-streaming would continue to see growth for the second year in a row, and has become a $1.8-2.2 Bn industry at the end of 2021.