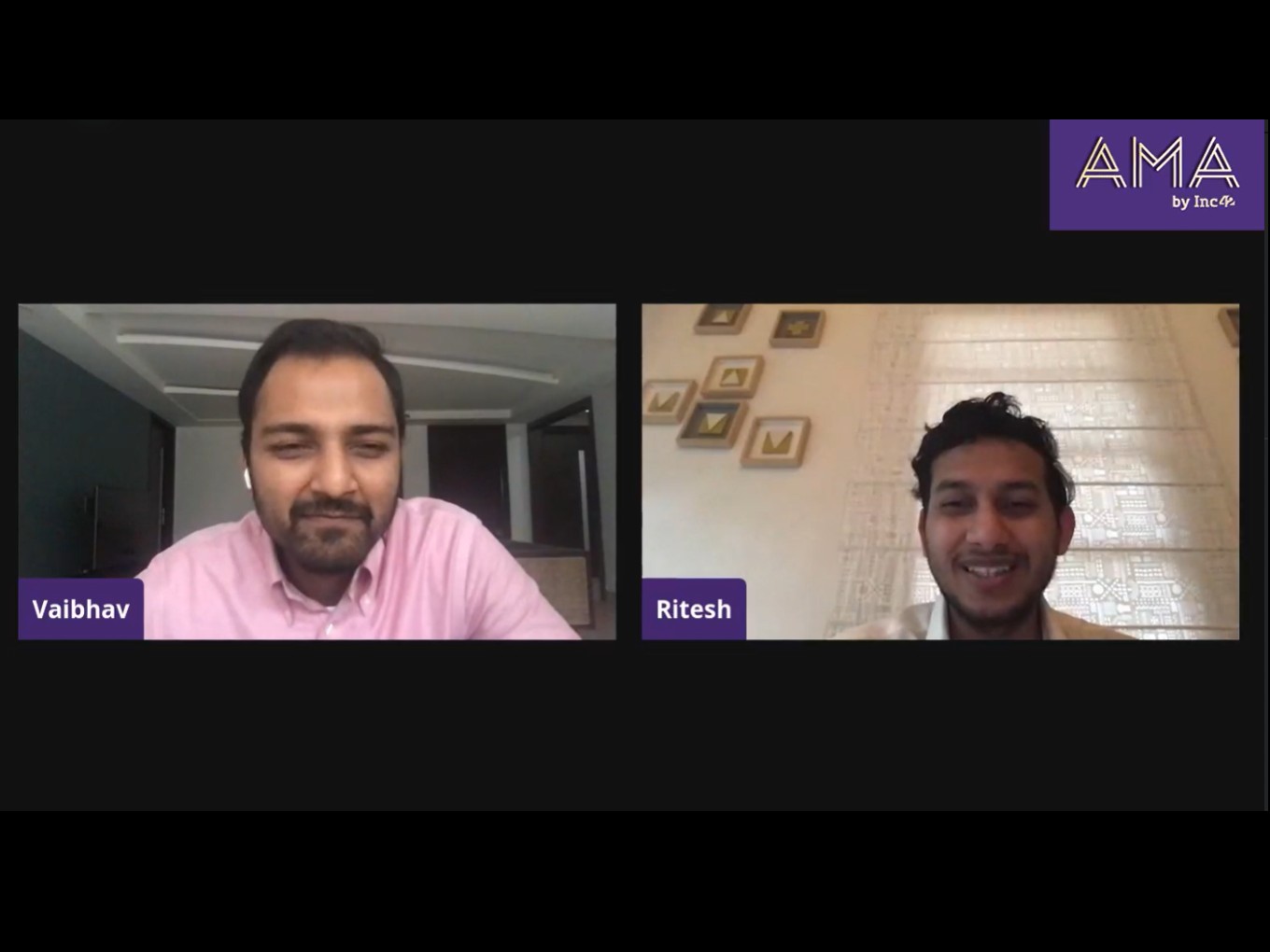 While companies can preempt some challenges, there are problems which only arise when scaling-up

For new entrepreneurs, Agarwal said that contactless check-in technology for hospitality will be a huge opportunity

From being a college dropout to building a global brand, Ritesh Agarwal has had an interesting journey to say the least. Things were going swimmingly for OYO, as it grew into a multinational startup. And then 2019 happened — OYO started the year with multiple hotelier protests to customer complaints to management upheaval to allegations of a toxic work culture to antitrust complaints and comparisons to the fall of WeWork and much more. And in a major downsizing exercise, thousands of employees were laid off. It was an inauspicious start to the year, about to get much worse.

Agarwal says the impact of Covid-19 began with a revenue hit in Thailand and soon snowballed into a global catastrophe, with OYO present in 80 countries. But Agarwal has now accepted the mistakes that the company made while blitzscaling last year.

In a freewheeling chat with Inc42 cofounder and CEO Vaibhav Vardhan on the latest Ask Me Anything episode, Agarwal looked back at last year’s rollercoaster as well as the playbook for hospitality in the new world post-Covid-19. Agarwal talked about how the company has decided to put its head down and focus on core businesses as well as how it is fixing the challenges for customers as well as hoteliers.

To begin with, Agarwal accepted that the company’s scale last year posed many issues, but he is of the belief that intention will now be to address the new challenges that have come up due to this scale. “If you think that scale doesn’t bring newer challenges every time, you haven’t seen the company grow,” he said. Agarwal explained that a company can preempt some challenges and put in place the right processes, but there are certain sets of problems which only arise when a company is scaling up.

“I’m truly focussed on making sure that we make improvements on each of those challenges, and those challenges do exist but nothing takes away from the fact that 99% consumers also use those experiences and appreciate it. But there is also a percentage —  0.5% of 10s of millions of customers, which is a lot of customers — [who are not happy] and we want to make sure that we make amends and improvements there,” said Agarwal.

Clearing The Challenges At Every Level

So what are these issues that the OYO chief has identified and is willing to fix? On the customer level, these are the routine social media complaints ranging from denial of check-ins to the quality of the room. And on the hoteliers’ side, the company is fixing revenue complaints as well as reconciliation timelines.

Agarwal said that the company already had a 3C policy, as part of which after 4-5 mistakes, a hotel was delisted from the platform. To improve this,  the company has reduced the number of mistakes or missteps a hotel is allowed. Agarwal said to further manage quality of service and hotels, the company had let go of “10s of thousands” of rooms in the first quarter of 2020.

Similarly, on the hotels front, Agarwal is confident that OYO is chosen for occupancy lift, technology systems for operations, and revenue management practices. He added that 43K hotel owners and 50K homeowners have seen occupancy lift.

But OYO chief is of the belief that the company didn’t clearly communicate the revenue part of the deal. Agarwal explained that usually hoteliers stick to a certain price point and are ready to sacrifice occupancy for the same. Here, OYO brings its service by offering varying price points to lift occupancy and bring a similar or more revenue.

“90% of our asset owners understand the principle of ARR and occupancy. Occupancy is what percentage of rooms are filled in a hotel and ARR is average room revenue that is what was the price the room was sold for. So occupancy multiplied by ARR gives you RevPar. So, we have not explained this very well to our last 10% of our hotel owners, that’s one thing that leads to some challenges,” Agarwal said.

Further, on the accounts reconciliation front, OYO has now trained business development executives to be able to reconcile books with the hotels directly, instead of going to the company’s accounts or finance department.

The Quality Vs Quantity Debate

“We are a service-oriented business and have hired heavily last year, but it takes time to share core values and culture with all of them,”

Reflecting on what things could have been done better throughout the past few years, Agarwal said that it is hard to say that X% growth is the right growth. “You learn from what that growth is and double down on good things and learn from mistakes and make improvements,” he added.

Further talking about quality vs quantity debate in terms of blitzscaling and using investor funds to expand, Agarwal says that a company cannot compromise on that front either. He claims that OYO has been able to do a significant amount of scale by delivering high quality in most markets.

Agarwal recalled that in 2016, when it launched in Malaysia, the company felt that it was growing too quickly and decided to take a pause and historically, it grew the slowest in FY 2016-17. But then it utilised that time to improve on its customer service, on working with the partners, on team members and the culture of the organization. “I believe that was probably one of the best years which helped us grow from there through 2019.”

Agarwal is hopeful of taking similar learnings from the last year and 2020 so far to grow and become a better business in the times to come.

Layoffs And The Way Back

OYO started the year with a major retrenchment drive and due to Covid-19 had to furlough most of its staff as well, with pay cuts for senior management as well as other employees. Talking about the same, Agarwal explained that the company first stopped all the controllable costs, and focused on the least amount of layoffs and also opted for furloughs.

Among the several choices that it had, Agarwal said he tried to choose the lesser evil. But talking about the toll it can take on an entrepreneur, Agarwal said that it can be really tough, but it does change perspective. “It will give you a sense of thankfulness and gratitude, if you are honest, straightforward and actively talking to your team members,” he added.

Talking about the new trends in the hospitality industry, Agarwal says that contactless check-in will be a huge opportunity. Further, entrepreneurs can also experiment with food experiences leveraging technology and several search and discovery platforms as well will surge

In an interesting segue, Agarwal responded to a viewer question regarding his past interviews indicating an ambition for self-actualisation under Maslow’s ‘Hierarchy of Needs’ depicted below. 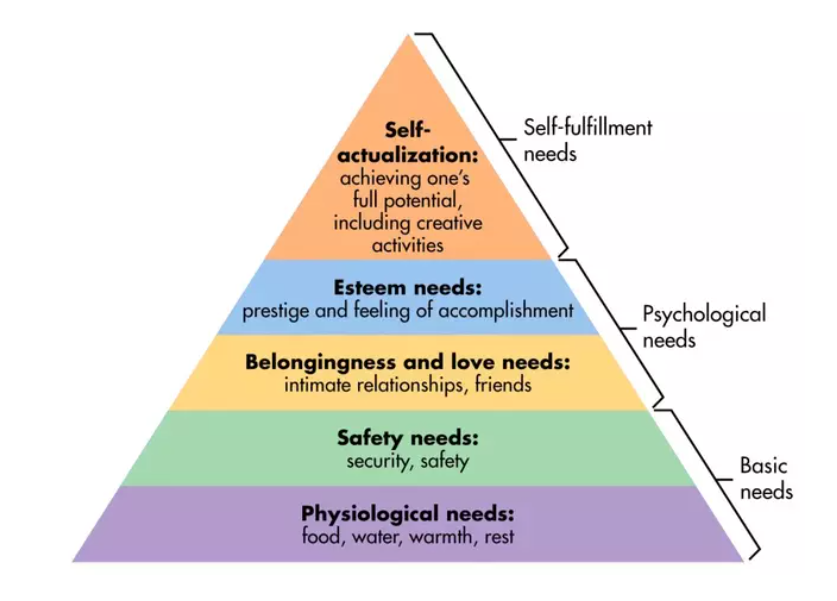 The basic theory is that the needs progress from lower down in the hierarchy and progress from physiological needs, safety, love and belonging, esteem to self-actualization.

Agarwal said it’s just about being able to be as honest as possible in both good things as well as areas of improvement.” It is clear that we could have done things better, we acknowledge them and improve as for an entrepreneur that’s the most critical thing — do good when there are challenges and be honest and acknowledge, but chart the path forward and keep building,” he added.

On the self-actualization aspect, Agarwal said that he is at least three levels below that and is currently in the thought process of doing the same job every day, but a little bit better than before.

As advice to entrepreneurs wading through this tough time, Agarwal said that if one doesn’t do tough things, then one cannot create value, only a commodity. “I believe hospitality and travel isn’t the most straightforward opportunity. Take this as an opportunity, because long term it will all heal, and when it does, you will be among few entrepreneurs who would have an opportunity to have built a real product and real customers and ride the wave of the growth that will come,” he added.