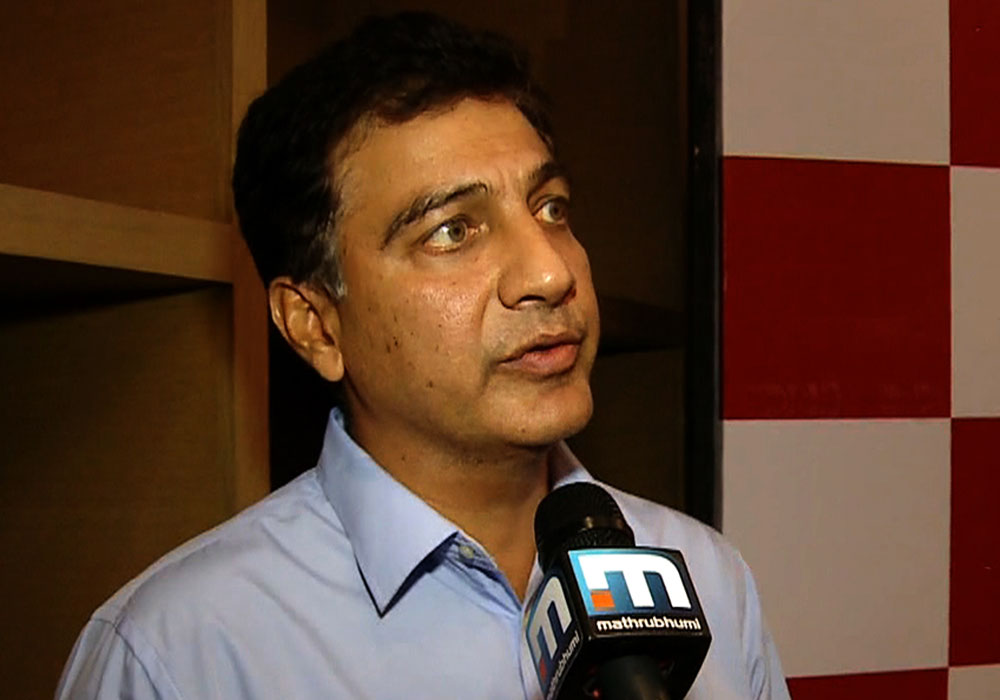 [Note: This article is part of The Junction Series. Rajat Tandon will be speaking at “The Junction” in Jaipur in January 2017. Get a deep dive on government initiatives, investing and the Indian startup ecosystem with him. Learn more about The Junction here!]

In October 2016, Indian Private Equity & Venture Capital Association (IVCA) appointed Rajat Tandon as its new President. In his new role, his key priorities will be the continuing promotion of regulatory reform, and deep engagement with the widening member base of IVCA.

Prior to the IVCA, Tandon was a part of the leadership team at Nasscom. As Vice President, he led the Nasscom 10,000 Startups initiative, supporting tech startups in India. Rajat had an early stint as an entrepreneur and an extensive corporate experience in the IT & telecom and location services.

Over the past 25 years, he worked in various positions, ranging from technical support, sales leadership, service delivery to strategic initiatives at Siemens, Nortel, Nokia (NAVTEQ). Rajat is extensively networked in the startup sector, having worked with most leaders in the industry.

In a candid conversation with Inc42, he speaks about the evolving startup ecosystem, the way investor interest is changing with the changing times and the IVCA roadmap for a brighter, emerging Digital India.

This interview has been edited for length and clarity.

Inc42: Looking back over the years, name a few ways that the startup ecosystem has changed/evolved?

Rajat: In 2013, there were hardly a few articles related to startups, come 2014 and startups got dedicated pages on most of the national dailies. This itself shows the emergence and flourishing scene of the startup ecosystem.

In 2014, a league of startups came up – these were the people who had come back from the US, Silicon Valley. They started working on Amazon models, Uber models, the ones that were getting quickly deployed. Interest started developing, but the entrepreneurs were still contemplating, if I should jump and take a leap to entrepreneurial journey or should I stick to my corporate life.

At the same time, students who were looking for jobs and couldn’t find an option were also interested in trying their hand at entrepreneurship. The success gained by a few people at that time came as a driving force to these budding entrepreneurs.

What do these startups need, what are the ideas, how to implement them! They started thinking on ideas, if 20 people want to do a foodtech startup, it didn’t really make a difference. If one was doing it in South Delhi, the other would opt for another hyperlocal market in NCR. People were majorly replicating models. The last-mile delivery fulfilment was important, and people took it up. They took the offline models and made them into online businesses.

Inc42: What kind of synergy are we seeing between startups, investors, and the government – vis-a-vis funding?

Rajat:, People started thinking outside the box, to replicate a model, in 2014. People only had to show up to raise funding because everyone was talking about startups or trying to be a part of the startup world. A while later, if the investors found a flaw or didn’t find the product sticky, without a decent UI/UX, they thought that the users would uninstall the app. They refrained from investing in such ventures anymore.

There was a frustration – but that was because quality focus was scarce. Everything was all about software startups. That is when people insisted on getting the startups incubated to have a basic idea about how things work, get a chance to see how business works, how to gain traction or how to develop a product as per the need on the user, get a traction on revenue.

Everybody started saying that the investments is falling down! But that’s not the case. So what’s different now? Things changed after 2016, when the government announced its initiatives for startups. Startup India Action Plan, all the secretaries and joint secretaries were sitting there and their problems were heard.

The fund of funds for INR 10,000 Cr was created. SIDBI was given the responsibility to identify and create the funds. Now scale is happening, that is funds are being formed, startup definitions, government certification, tax rebates. The government has defined that startups need to innovate to be considered under the purview on the definition to avail benefits.

When it comes to incubation, Niti Aayog said, ‘Atal Mission, go out, spread, let’s involve colleges in the incubation process. Let’s get Tinker labs, give support to existing labs. So that the startups can scale.’ People started focussing on hardware startups also. It all started getting thematic. Now there are sectors, agritech, deeptech, fintech. So the government is interested in startups and is taking up initiatives to promote them.

(As a result) today, we are the second or the third in terms of number of startups in the world, and we will soon be ahead of China too.

Rajat: Fintech seems to be the sector that will be on a rise. The traditional once will continue to flourish too, like commerce as they keep penetrating into deeper markets. This will lead to an upsurge in logistics startups, that will provide last-mile delivery. AI is also looking promising, robotics in the hardware sector, IoT in the health space.

Inc42: There is a lot of talk regarding a funding crunch in 2016 – What is the investor sentiment about this?

Rajat: There are a lot of funds being setup, to invest into early-stage startups, besides government announcements. But the fact of the matter is, these funds are not even getting utilised.

Because investors are refusing to fund ideas that might be a copycat or the ones without any viable users. If they don’t have any traction or download then they aren’t funding such startups. They look for innovation. So this goes back to the start where you look for a genuine solution to real-life problems. It has to be long-lasting!

India has a lot of its own problems – we have infrastructure problems, we need products around banking and insurance! We have about 230 Mn bank accounts, so we need to have solutions for that. Build something around healthtech, as the health facilities aren’t that good. Another sector is skill, the available skill set is less.

These are the sectors where startups are saying, ok great we can probably try and make a difference.

IoT, AI, gamification has picked up. So now the focus is to ideate, build a product and look for customer satisfaction. The number of funds that have come across in FY16 are 253, as of June 2016. There is no dearth of money.

Inc42: What are some of the measures undertaken by the IVCA to promote PE and VC funding, specifically?

Rajat: The IVCA aims to support entrepreneurial activity and innovation as well as the development and maintenance of a private equity and venture capital industry that provides long-term equity capital.

As an organisation, it has a prime objective that funds coming in the country and the domestic funds that exist in the ecosystem are leveraged properly. Getting these funds to set up their shops requires understanding of the trends, the legal framework, taxation aspects. So IVCA as an association, voices its opinion on the outer investment funds. We voice this across ministries, the government, and the people that can actually make a difference. 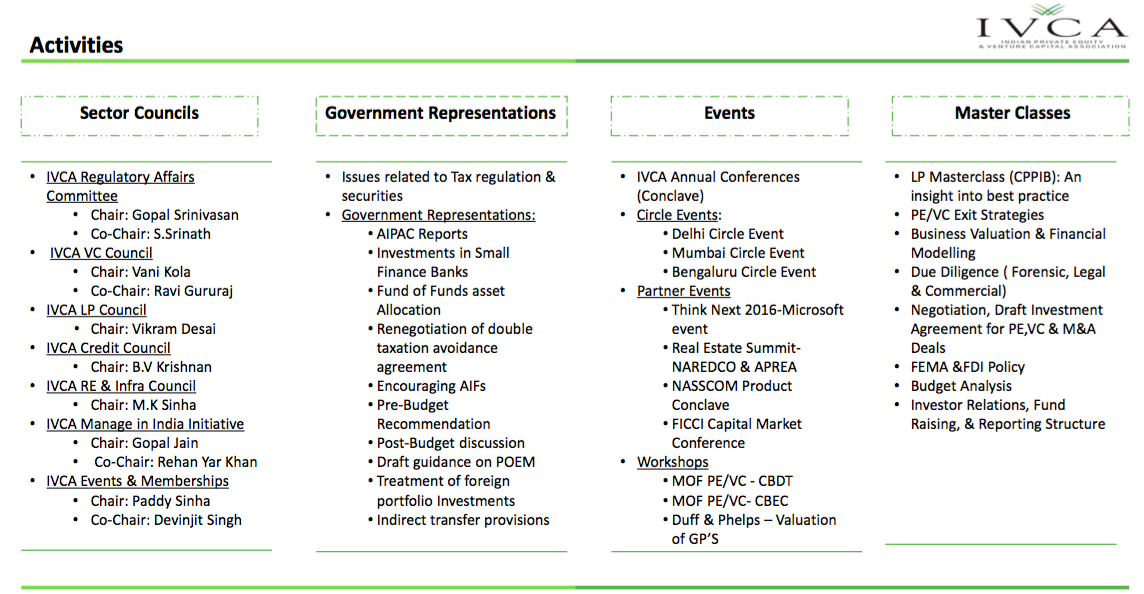 Again we provide the opportunity to network between these parties. Startups have their own get-togethers, here is where we get an opportunity to get VCs to interact and network with PE Firms, large LPs etc. There is information sharing and networking. IVCA also collects, circulates and disseminates commercial statistics and information related to the private equity & venture capital industry.

It is also involved in the education phase. If people need guidance about factors as small as making a term sheet, to making a great product. So people who invest in such big startups, bring a lot to the table, they give adequate mentorship as well. They have a strategic financial guidance, what is the correct valuation, what needs to be done, all of that necessary expertise to startups – we make these factors available to the startups.

Inc42: There are a lot of policy changes that have come up. What plan does the IVCA have to foster investments in a startup?

Rajat: We have identified four sector councils to concentrate our efforts on role of the government in boosting the ecosystem.

An upcoming council called Manage in India has been instituted for domestic funds. It will be more about onshoring and will be chaired by Gopal Jain.

Inc42: The one piece of advice you would like to give to those who want to start up?

Inc42: What do the next one-two years look like for the IVCA?

Rajat: To ensure the ecosystem gets receptive to risk capital and grow the domestic pool.

People keep talking about the startup bubble that is about to burst and at the same time there are more people coming in with new ideas and are raising a decent amount of funding.

Burst applies only to copycats. Every household has a plan to do a business. One has to go put in money, not all ideas can become great business. Unless there is innovation, they won’t get funding. The team becomes so important. The people who constitute the core team that are dedicated towards making a change will easily survive.