The shares of digital payments major MobiKwik in the unlisted space witnessed a slight downward movement over the past week. 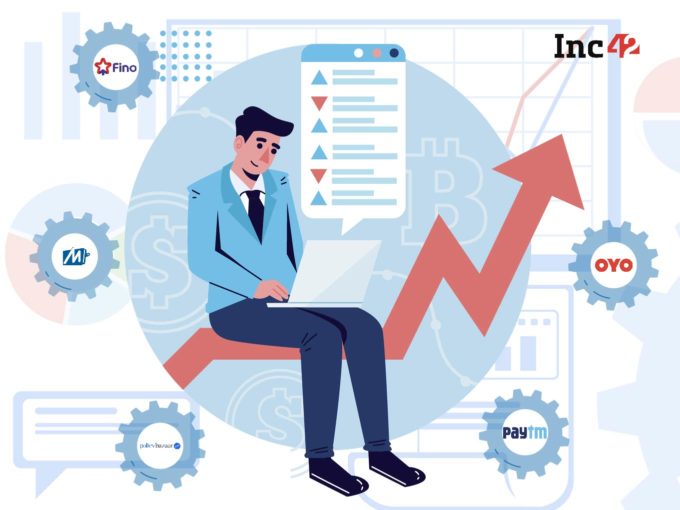 The past few days have been quite eventful for IPO-bound startups, right from the much-awaited approval to Paytm’s INR 16,600 Cr public offer to the announcement of Nykaa’s IPO dates.

Unlisted shares of these new-age companies, however, have been largely tepid off late. The concerns about these unlisted shares running at a premium than their anticipated IPO price band have also kept the trading volumes low in most of these shares.

Unlisted shares of Fino Paytech, which runs the IPO-bound Fino Payments Bank, have been largely trading in a narrow range with a downward bias in the past week. On Monday (October 25), its shares were trading in the range of INR 400-425, down from INR 425-450 a week ago (October 18).

Speaking to Inc42, Sandeep Ginodia, CEO of Altius Investech said, “Fino’s unlisted shares have increased multifold from around INR 85 in September-October 2020 to over 400 now. Most of the developments have been factored in the share prices.”

Traders are expecting the INR 1,300 Cr offer to hit the market around Diwali.

Investor sentiments have been positive over the stock, given the profitability of the Mumbai-based fintech startup in comparison to its market contemporaries, noted Manan Doshi, Cofounder of Unlisted Arena.

The shares of digital payments major MobiKwik in the unlisted space witnessed a slight downward movement over the past week.

The uncertainty over issue price, which is likely to be lower than the current unlisted prices, has kept the prices low, traders said.

The NCR based startup which recently turned unicorn is likely to hit the public markets around Diwali. The capital market regulator approved its public offer worth INR 1,900 on October 7th, 2021. 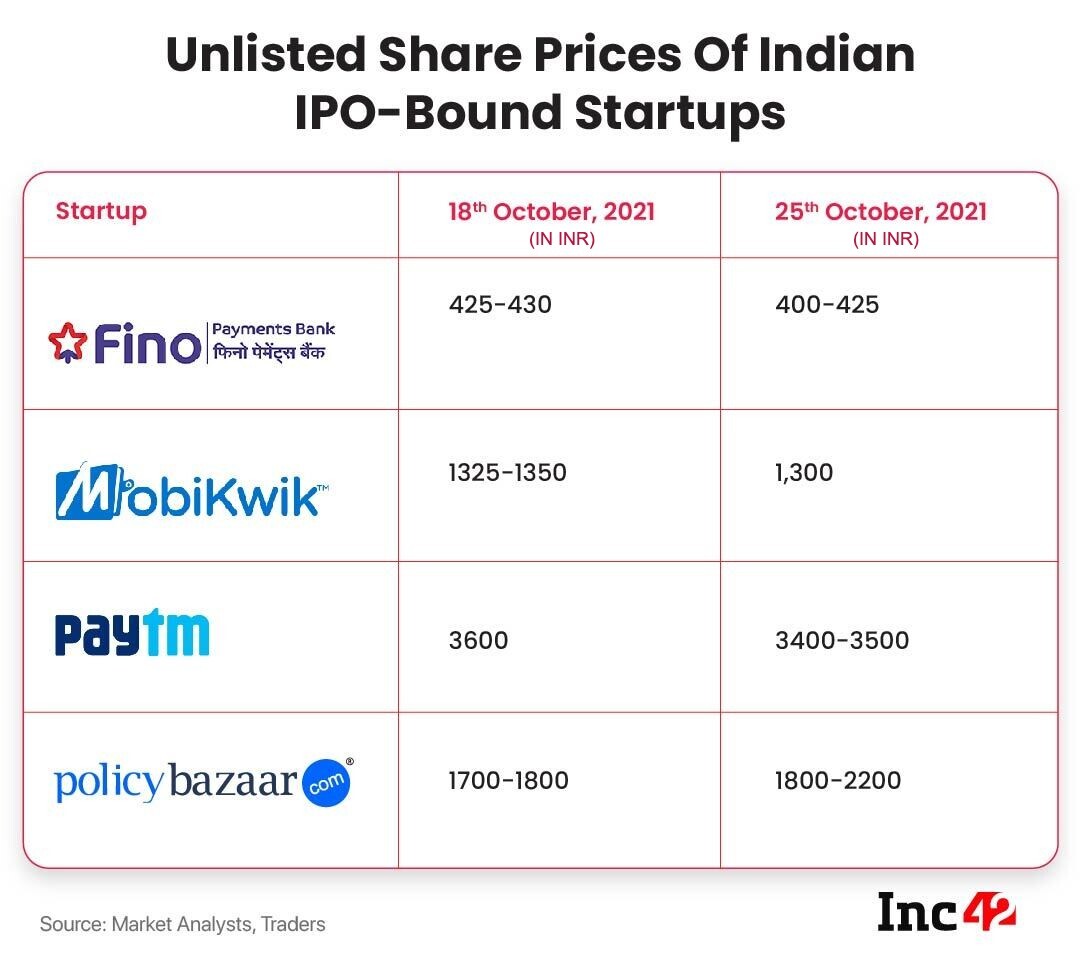 Digital payments giant Paytm received market regulator SEBI’s nod for its IPO last week. However, this has not lifted the grey market shares as anticipated.

However, the price on Monday slightly improved from INR 3,200-INR 3,300 per share on Saturday.

Analysts said that persistent concerns and lingering market sentiment around the current prices (being way higher than its actual IPO price band) would have kept investors cautious.

According to Inc42 sources and market analysts, there are chances that the company might not go ahead with the pre-IPO round.

The company’s valuation has been in question for some time now, which is also a dampening factor for traders in the unlisted market. Earlier this month, valuation guru Aswath Damodaran valued the digital payments major at $20 Bn.

According to an Inc42 source, Paytm is looking at a valuation between $20 Bn and $22 Bn for its IPO.

Paytm was valued at $16 Bn in November 2019 when it raised $1 Bn from Ant Financials, SoftBank Vision Fund. Previous reports had suggested that Paytm will be looking at a $25 Bn – $30 Bn valuation.

The development, however, did not boost its unlisted share prices. Its shares on Monday were trading around INR 1,800, unchanged compared to a week ago.

Ginodia said that the bulk buyers are pitching in at INR 1,800, and some retail buyers are taking at INR 2,200, but the volumes are very thin as the “pricing is very risky”.

The market anticipates the prices to be at a premium as the traders feel the IPO may come in at around INR 1,000-1,200 per share, leading to lower enquiries.

The fintech unicorn is looking for a $6 Bn -$7 Bn valuation up from an expected $5.5 Bn – $6 Bn. The company is expected to hit the public markets pre-Diwali.

As trading in the unlisted shares of these IPO-bound startups remain tepid, a similarity which is largely seen is the concern over the current prices being at a premium than the eventual IPO price band.