On the Bombay Stock Exchange (BSE), it made a debut at INR 1,955 apiece

The IPO had closed with a lesser than anticipated subscription of 1.89 times, but analysts have noted that Paytm’s large issue (INR 18,300 Cr) meant that the retail size is much larger in absolute terms of value than recent startup listings 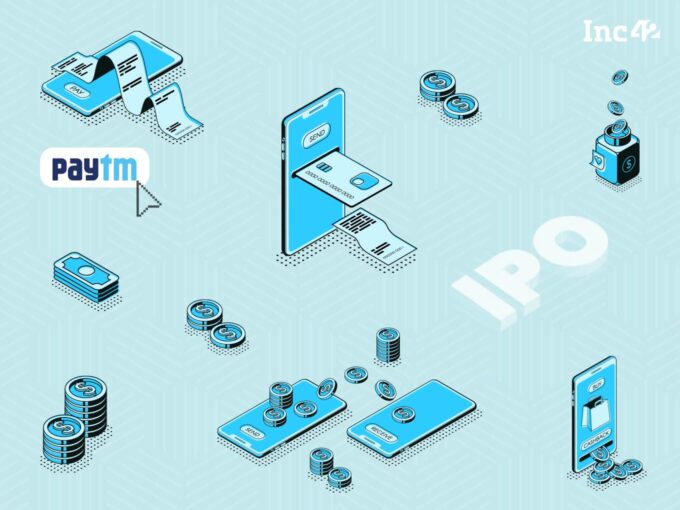 The shares of One97 Communications, the parent company of Paytm witnessed a tepid listing on Thursday (November 18), as its shares went live on the stock exchanges with a discount of nearly 10%.

Paytm’s grey market prices were running at a discount of around INR 10 – INR 20 of the issue price of INR 2,150 during the subscription. Dubbed as India’s largest IPO, Paytm’s offer took off with a slow start on November 8.

After the IPO closed with a lesser than anticipated subscription of 1.89 times, the grey market premium slumped around 2% to INR 40 – INR 50. Analysts further noted that Paytm’s large issue meant that the retail size is much larger in absolute terms of value than that seen in recent internet IPOs like that of Zomato or Nykaa.

Paytm was the largest public issue in India, raising INR 18,300 Cr — a fresh issue of INR 8,300 Cr and an OFS of INR 10,000 Cr. The net proceeds from fresh issuance will be utilised for strengthening the Paytm ecosystem and investing in new business initiatives, acquisitions and strategic partnerships.

Over the last decade, Vijay Shekhar Sharma-led Paytm has garnered support from some of the marquee investors around the globe. These include Jack Ma’s Ant Financials, Japan’s SoftBank, South Africa-based AGH Holdings and Canada’s Discovery Capital.

Despite business growth and rise in revenues, continued losses and lag in profitability have been concerns for the NCR based digital payments giant.

The increase in losses comes largely on the back of a 40.6% year-on-year (YoY) surge in its expenses to INR 1,312.3 Cr in April-June this fiscal.

In terms of revenue, it witnessed a 62% growth from operations during Q1 FY22 at INR 890.8 Cr, backed by robust growth from payment and financial services.