Grey market premiums suggest that the shares may get listed around INR 60 higher from the issue price of INR 2,150 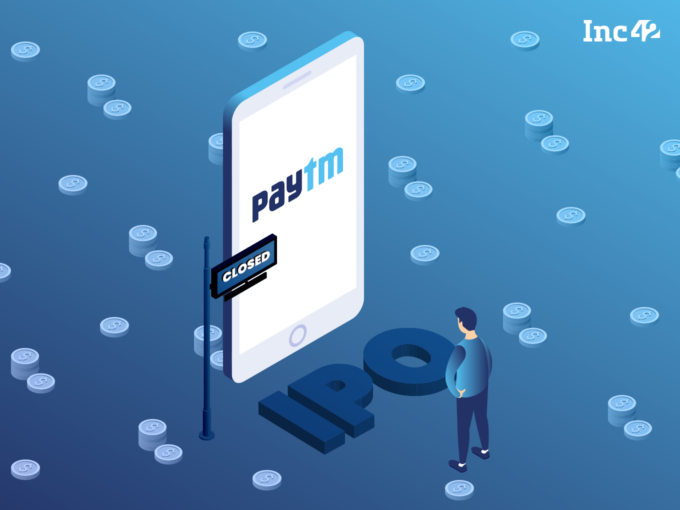 The INR 18,300 Cr initial public offering (IPO) of One 97 Communications, which runs fintech giant Paytm ended on Wednesday. Post a moderate response for most of the three-day offer, the IPO was finally oversubscribed backed by a healthy response from institutional investors today (Day 3).

Although the subscription has been much lower than some of the recent blockbuster startup IPOs, including that of Zomato and Nykaa, the slow pace and lower-than-anticipated subscription can be attributed to the sheer size of the offer, given it is India’s largest IPO at INR 18,300 Cr.

Analysts noted that Paytm’s large issue meant that its retail size is much larger in absolute terms of value than that seen in recent internet IPOs like that of Zomato or Nykaa. On the first day of the offer, Paytm’s IPO had secured the highest ever retail percentage subscription for IPOs with retail size in excess of INR 1,000 Cr over the last decade.

The company is likely to go public with a $20 Bn valuation. Its shares are expected to be listed on the stock exchanges on November 18.

Grey market premiums now suggest that the shares may get listed around INR 60 higher from the issue price band of INR 2,085 – INR 2,150.

Another digital payments major Mobikwik, which got the SEBI nod for its INR 1,900 Cr IPO has not yet announced the dates and the price range for its offer.

The much expected startup IPO season for fintech startups started on October 30 with the opening of the Fino Payments Bank IPO. The fintech giant’s offer was subscribed two-times at the end of day 3. The Mumbai-based fintech major is yet to list its shares on the exchanges.

Policybazaar, which opened for subscription on November 3rd, subscribed 16 times. The shares of insurtech unicorn are expected to get listed by November 15.