Exclusive: OYO Likely To List Around Diwali; May Reduce IPO Size To $800 Mn 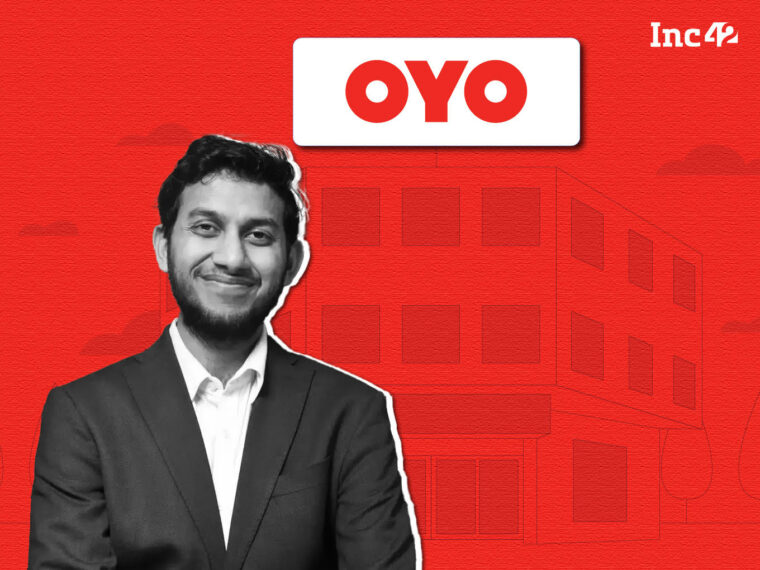 OYO is looking to reduce its IPO size to $800 Mn from $1.2 Bn it planned earlier

Negative market sentiment, headwinds posed by the pandemic and investor pullback has led the company to seek a lower valuation of $7 Bn-$8 Bn

OYO filed its DRHP with SEBI in October last year, and has now sought its approval to file the financial statements for FY22

Hospitality unicorn OYO is looking to list on the stock exchanges around the Diwali festive season, multiple sources aware of the development informed Inc42.

Delhi-NCR based OYO, which filed its Draft Red Herring Prospectus (DRHP) in October last year to raise $1.2 Bn (INR 8,430 Cr) through an initial public offering (IPO), is now looking at an issue size of $800 Mn, a 33% reduction from its earlier plans, the sources said

As reported earlier, the SoftBank-backed hospitality unicorn is looking at listing on the exchanges at a $7 Bn-$8 Bn valuation. “OYO was earlier targeting a $10 Bn valuation, but in the face of downturn the markets have seen globally, headwinds posed by Covid-19 and now the investor pullback, the valuation they are looking at is $7 Bn-$8 Bn,” one of the sources quoted above said.

The startup, which is yet to receive the Securities and Exchange Board of India’s (SEBI’s) nod for its IPO, has written to the market regulator seeking approval to file FY22 financial statements, which reflect an uptick in its business post the second Covid-19 wave.

“The offer for sale (OFS) component may constitute a small portion of the overall issue size, although the given timeline is still a few months away, and this part may change depending on the market conditions then,” one of the sources said.

SoftBank, which has a 48% stake in OYO, will dilute its stake in the startup and its share sale is likely to constitute a majority portion of the OFS, the sources said. Other investors who are likely to offload their stake in the IPO include A1 Holdings Inc (Grab) and China Lodging,

Inc42 has sent a detailed questionnaire to OYO. The story will be updated as and when the company responds.

The Gurugram-based unicorn raised INR 230 Cr as part of its pre-IPO round at a valuation of around $9.6 Bn in January.

“This round mostly involved the ESOP sale by existing employees. HNIs based in the Middle East and the Doha-based Qatar Insurance Company also participated in the pre-IPO round,” the sources said.

Last year, tech behemoth Microsoft invested $5 Mn in OYO at a $9.6 Bn valuation. Prior to it, the startup raised $660 Mn debt from various institutional investors.

The Covid-19 pandemic dealt a severe blow to the hospitality industry as a whole, including OYO. It hit the startup’s growth plans, impacting its international expansion as well as core business in India.

“Around 88% global hotel storefronts are in the unorganised sector, thus creating significant opportunities for OYO,” the hospitality unicorn’s DRHP stated.

OYO was founded in 2012 as an app to help customers find nearby hotels and homestays. It later pivoted to an Airbnb like model, branding partnered hotels/ accommodations as OYO stays and also expanded to markets outside India, including the US, the UK and the UAE.

OYO said in its DRHP that it would utilise the proceeds from the IPO to fund its debt borrowings, organic and inorganic growth initiatives, and for general corporate purposes.

The unicorn also announced a top management rejig ahead of the IPO, naming Ankit Gupta as the CEO of OYO Homes and Hotels business in India and elevating Rohit Kapoor as the global marketing head from his earlier role as OYO India and South-East Asia CEO.

Many Indian startups with listing plans have either deferred or postponed their IPOs in the recent past. Industry veterans have attributed delay in IPOs of new-age tech startups to the geo-political situation due to the Russia-Ukraine war, the resulting crash in global markets as well as poor response to several startup IPOs in India.

Notably, travel tech startup ixigo received SEBI’s approval for its INR 1,600 crore IPO in December last year. However, the company is yet to announce its listing plans, likely due to the turbulent market conditions as well as the hit the travel and tourism industry has taken due to the pandemic.

Additionally, startups like PharmEasy and Mobikwik, which have received SEBI approval for their IPOs, are also in a wait-and-watch mode and have not announced the dates yet for their public offer. Wearables brand boAt and ecommerce platform Snapdeal have also filed for their IPOs and are awaiting the market regulator’s nod.