Org Chart: The People With Power At IPO-Bound PharmEasy

Org Chart: The People With Power At IPO-Bound PharmEasy

PharmEasy-parent API Holdings has filed a Draft Red Herring Prospectus (DRHP) stated to raise INR 6,250 Cr through IPO — in a rare move, the entire fundraise is through a fresh issue

PharmEasy has raised a total of $1.6 Bn funds from 43 investors across 14 funding rounds and is currently valued at $5.6 Bn; Prosus (formerly Naspers) is the largest stakeholder at API holdings followed by Temasek, and TPG Growth 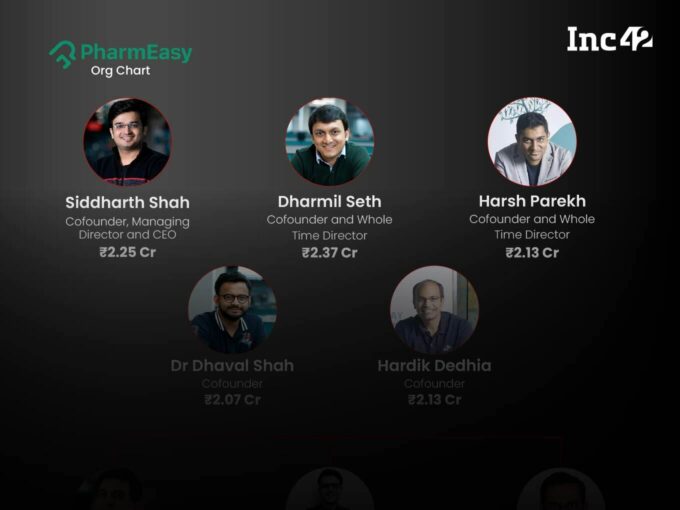 Bengaluru-based epharmacy platform PharmEasy’s parent firm API Holdings filed its draft red herring prospectus (DRHP) for INR 6,250 Cr IPO. Unlike other IPO-bound companies, the startup will be raising the entire offer amount through fresh issue of shares as its existing investors will not sell shares.

The healthtech unicorn, which currently values at $5.6 Bn, said that out of the total IPO proceeds, it will utilise INR 1,920 Cr towards “prepayment or repayment of all or a portion of certain outstanding borrowings availed by the company and certain of its subsidiaries.”

Prosus (formerly Naspers) is the largest stakeholder in the company, followed by Temasek, TPG Growth, others.

PharmEasy claims to connect 60K+ brick-and-mortar pharmacies and 4K+ doctors in 16K+ pin codes across India. It also provides SaaS procurement solutions, delivery and logistics support, and credit solutions to pharmacies. The startup claims to have served over 20 Mn patients since inception.

Here is a look at the Key Managerial Personnel (KMP) leading PharmEasy as it ventures into the public market: 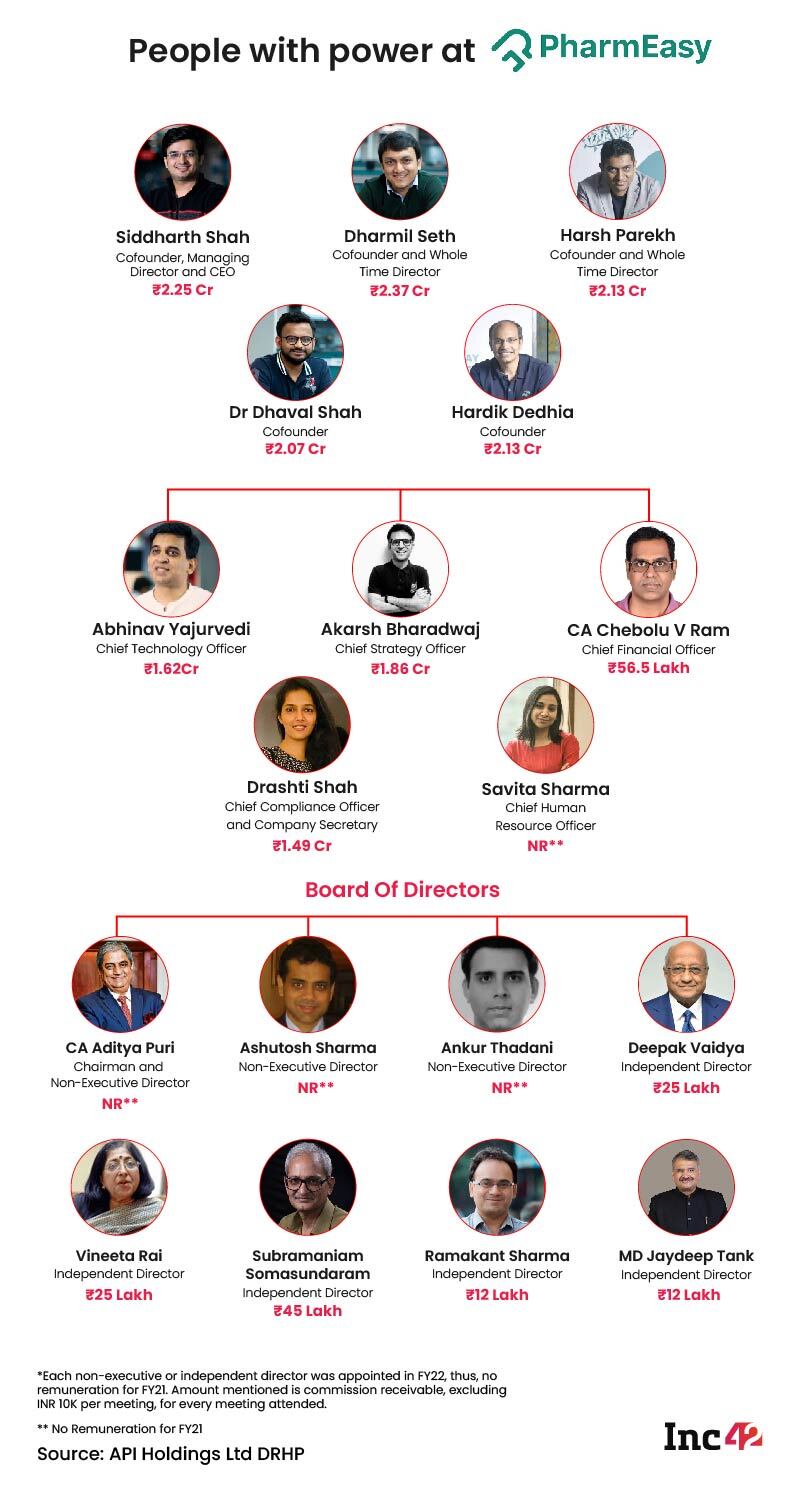 An IIM-Ahemdabad graduate with a computer engineering degree from the Dwarakadas J. Sanghavi College, Mumbai, Siddharth Shah holds a 1.32% stake in the healthtech unicorn. In FY22, Shah received a total remuneration of INR 2.25 Cr, including INR 28.8 Lakhs and INR 51 Lakhs from subsidiaries Ascent Health and Ascent Pharma respectively.

He was associated with Ascent Health and Wellness Solutions Private Limited as its managing director. Post its merger with PharmEasy in 2019, he has been a cofounder, and director on the Board of API Holdings since August 27, 2020.

Dharmil Sheth, the cofounder and a whole-time director of PharmEasy, received total compensation of INR 2.37 Cr in FY21. An electronics engineer from the KJ Somaiya, Sheth was previously associated with MakeMyTrip as a part of the online products team.

Before the merger with Ascent Health, API Holdings was called 91Streets Media Technologies, where Sheth was a director and cofounder. He has been a director on the Board of API Holdings since September 9, 2021.

Harsh Parekh, who also joined PharmEasy from Ascent, is an MBA from the School of Business Management, NMIMS. He has been previously associated with Bharti Airtel Limited and was later the COO of Ascent Health.

Parekh received a total of INR 2.13 Cr in remuneration in FY22 of which INR 28.3 Lakhs is from Ascent Health and INR 1.85 Cr from Ascent Pharma.

Dr Dhaval Shah, PharmEasy’s cofounder, is responsible for the growth of products and services in the company. He is the one responsible for acquisitions and integration that are undertaken by PharmEasy and its subsidiaries.

An MBBS from MUHS, Nashik, he also holds a PGDM from XLRI-Jamshedpur. He was a director of API Holdings until September 6, 2021, for which he received a remuneration of INR 2.07 Cr.

Hardik Dedhia, PharmEasy’s cofounder, served as the chief technical officer of Ascent until its merger with 91Streets Media. At API Holdings, he is responsible for scaling up technological innovations and plays a key role in integrating tech teams and solutions across the company.

An electronics and telecommunication engineer from the University of Mumbai, he holds a master’s degree in electrical and computer engineering from Carnegie Mellon University, Pennsylvania. Previously, he has been associated with NetApp as a quality assurance engineer.

During FY21, he received a remuneration of INR 2.13 Cr from Ascent Health.

Abhinav Yajurvedi was appointed as the CTO of API Holdings on September 9, 2021. An IIT Roorkee alum, Yajurvedi has previously been associated with Amazon, as a software development manager and Myntra, as SVP-Engineering.

As a part of 91Streets Media and API’s subsidiary Threpsi Solutions, he received total remuneration of INR 1.62 Cr in FY21.

PharmEasy’s chief strategy officer, Akarsh Bharadwaj is a VIT, Tamil Nadu alum, who began his career with Nokia Seimens Networks. He has been previously associated with Dun & Bradstreet and Goldman Sachs.

He has been associated with Ascent, and later 91Streets for a little over 5 years. During FY21, he received a total remuneration of INR 1.86 Cr from 91Streets Media.

Chebolu V Ram is the chief financial officer of API Holdings since October 12, 2020. A CA by profession, he has significant experience in finance, strategy and operations across e-pharma, hospitality, healthcare, ITES, telecom, insurance and manufacturing industries.

Previously, he has been associated with Apollo Health, Genpact India, Bharti Airtel, Nagarjuna Fertilisers, and Impresario. In FY21, he received a remuneration of INR 56.5 Lakh.

Drashti Shah, the company secretary and chief compliance officer of our Company, joined Ascent Health legal head and the then CS on February 10, 2021. Previously, she has been associated with Reliance Industries as team manager in the corporate secretarial and compliance department.

Shah received a total remuneration of INR 1.49 Cr in FY21.

Corrections (in text and images) were made in Siddharth Shah and Harsh Parekh’s remuneration to reflect the inclusion of payments from Ascent Wellness and Pharma Solutions.