Mumbai-based beauty products marketplace Purplle, operated by Manash Lifestyle, reported a widening of its loss to INR 51.27 Cr in FY21 from INR 24.38 Cr in the previous fiscal year.

The ecommerce platform also offers paid memberships to its users that come with privileged options such as free shipping and access to unlimited beauty masterclasses, among others. Purplle’s revenue generated from this membership and subscription services grew to INR 1.3 Cr in FY21 from INR 51.2 Lakhs in the previous fiscal year.

Its collection of royalty from companies retailing on its platform made up as much as 30.7% of the total operating revenue. Royalty income grew by 61% year-on-year to INR 39 Cr in FY21.

The startup also reported about a 54% increase in its total expense to INR 189.37 Cr in FY21. The other expenses segment, which includes advertising and promotional expenses, vehicle running expenses, legal professional charges, among others, contributed about 50% to the total expenses. 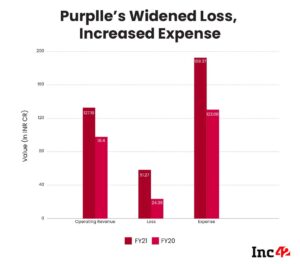 Its total expenditure on employee benefits also grew to INR 36.8 Cr in FY21 from INR 19 Cr in the previous fiscal year.

Purplle’s private label called StayQuirky accounts for a major chunk of its sales.

In November last year, Purplle raised around INR 368 Cr ($49 Mn) in continuation of its Series D round from the family office of Wipro founder chairman Azim Premji. A month prior to that, Purplle closed a $75 Mn fundraise as part of its Series D round, led by new investor Kedaara Capital, in participation with Sequoia Capital India and Blume Ventures.

Internet penetration has led to a major boom in the ecommerce marketplaces in the last few years, especially after the pandemic, even in Tier 2 and Tier 3 cities. The Economic Survey of India 2021-22 stated that the country crossed the mark of 800 Mn internet subscribers in 2020-21, growing by over 337 Mn since 2017-18.

Separately, according to an Inc42 plus report, the number of online beauty shoppers in the country could soar to more than 122 Mn by FY25.