In terms of pricing, Ola is looking to undercut existing players such as Ather Energy with a launch in February 2021

The company plans to shift the EV scooter production from the Netherlands to India, but its acquisition of Dutch startup Etergo is being challenged 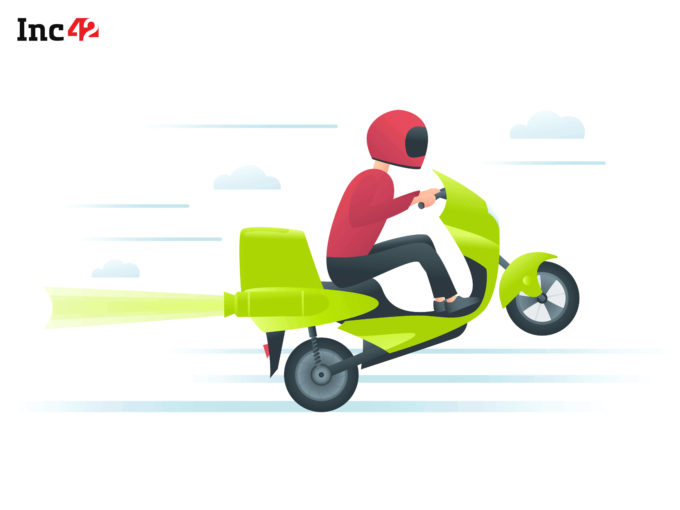 Bengaluru-based Ola Electric, which is gearing up to launch electric scooters in India and Europe, will price its maiden two-wheeler lineup at around INR 90,000-INR 95,000 per unit, according to three people aware of the development.

Branded ‘App Scooter’, Ola’s two-wheelers will have support for charging at home and using public charging infrastructure. The App Scooter is said to have three interchangeable battery modules — each battery has a capacity of 600W per module providing an 80Km range per module.

The electric vehicle arm of the ride-sharing unicorn Ola will look to launch App Scooter in India by February 2021. However, due to the lack of public infrastructure for swappable batteries in India, the electric scooter will now have an inbuilt port for public charging as well, said one of the three people quoted above.

According to one source, Ola plans to build a domestic production capacity to assemble up to a million EVs and will look to compete with the likes of Honda Activa and TVS Jupiter.

Since support for swappable battery stations is low in India, Ola has chosen to allow owners to charge the vehicle at home as opposed to be swapped at battery stations. The scooter will also have a port which would be compatible with public charging stations.

“Much of the scooter that Ola acquired has already passed the prototype stage. However, we could not do a fully-functional battery-swapping option. So of course, at least in the initial phases, we will be allowing public charging but we still believe that battery swapping is the long-standing game. But the debate is still going on (in the company). We are peculiar about it because once we can pull off battery swapping, the per kilometre cost will be even lower than distributed charging,” said another Ola employee, asking not to be named as they are not authorised to speak publicly on the project.

We were also told that the “App Scooter” is currently in the final legs of securing a homologation certification from Indian regulators and electric vehicle certification authorities. And since the Indian market’s certification process exactly mirrors European market standards, the process is expected to be completed before the end of 2020, given that Ola is using the design it acquired from Etergo.

Ola declined to comment on the latest development when contacted by Inc42.

In May 2020, Ola Electric announced that it would start operating as a full-stack manufacturer of electric two-wheelers after acquiring Amsterdam-based Etergo BV. The App Scooter range is currently being manufactured at a production facility in the city of Emmen in Netherlands, according to one of the sources who is aware of Ola’s operations.

The Etergo acquisition, however, has had some troubles in the home market in the Netherlands. Ola’s acquisition of the Amsterdam-based Etergo BV, was originally a fire sale. After raising around €21 Mn ($24.8 Mn) in equity financing from more than 6,000 individual investors, Etergo got sold to Ola Electric for €3.75 Mn ($4.44 Mn) valuation, according to internal emails and multiple Etergo investors who spoke to Inc42. Some of these early investors were forced to accept a share buyback at less than 90% of the original price, and a bunch of these investors are now in the process of taking Etergo and Ola Electric to court.

Ola Electric is currently leveraging Amsterdam-based Etergo’s design and engineering capabilities including the intellectual property (IP) to build its smart electric two-wheeler product. News reports had earlier indicated that the Bengaluru-based startup is looking for 100 acres of unencumbered land to set-up a large manufacturing facility in India itself.

Although Ola Electric’s scooter produced by Etergo claims to compete with the petrol vehicle brands such as Honda Activa and its ilk, the App Scooter will in fact directly take on existing two-wheeler EVs such as Ather Energy, Ampere, Okinawa, Tork Motors, Hero Electric and many others. As per industry estimates, India has a market which sold only a little over 150,000 EVs In FY 2019-2020, where the majority of the vehicles are in the e-rickshaw category.

Ather Energy, which is currently the most funded startup in the EV space, had reported a revenue of INR 48.8 Cr in FY20, representing over 4x growth from INR 11.7 Cr in the previous fiscal year. On the other hand, Ola Electric which currently sells e-rickshaws, and operates with a network public charging in cities like Delhi and Nagpur, reported revenues of INR 21Cr in FY19, over losses of INR 60 Car in the same financial year.

Among the competition, Ather Energy currently manufactures high-end electric two-wheelers that sport LCD touchscreens and also receive regular updates for the battery management software as well as other diagnostics software. Ola’s App Scooter sports similar specifications with a touchscreen but details about software updates are yet unclear.

Ather launched its first scooters — Ather 450 and Ather 340 — back in 2018. But company had then decided to discontinue the entry-level Ather 340 scooter in September 2019 due to low demand. It then launched the Ather 450X in January 2020, and has already begun delivering these scooters across multiple cities in India. In comparison to Ola, Ather’s 450 and 450X scooters start at INR 1.13 Lakh and go up to INR 1.46 Lakh, making them a considerably more expensive option, if Ola manages to achieve the sub-INR 1 Lakh mark.

Ola will have a tougher time competing with Gurgaon-based two-wheeler EV manufacturer Okinawa, which sells mid-range scooters priced between INR 45K up to INR 75K currently claims to have sold around 32,000 units in India in FY 2019-2020.

Okinawa is in the process of upgrading its local manufacturing capacity and said that it is going to launch a 100% localised bike with the focus on ‘Make in India’ in the Indian electric vehicle segment by end of FY21. Feature-wise, the new electric bike will clock a top speed of 100 Km per hour and will have a lithium-ion battery base.

In terms of the competitive edge, Ola’s brand will help it reach pockets where EV two-wheelers have not yet penetrated, and with EV sales growing encouragingly in the past year, this could be the right time to capitalise. Whether Ola manages to overcome the typical network and after-sales service hurdles in the auto sector for new players remains to be seen.